Victor Vescovo, a retired naval officer, hopes his discovery of trash in the Mariana Trench would raise awareness about dumping in the oceans and pressure governments to better enforce regulations. A technician checks the submarine DSV Limiting Factor aboard the research vessel DSSV Pressure Drop above the Pacific Ocean's Mariana Trench in an undated photo released by the Discovery Channel May 13, 2019. Credit: Reuters

New York: On the deepest dive ever made by a human inside a submarine, a Texas investor and explorer found something he could have found in the gutter of nearly any street in the world: trash.

Victor Vescovo, a retired naval officer, said he made the unsettling discovery as he descended nearly 6.8 miles (35,853 feet/10,928 metres) to a point in the Pacific Ocean‘s Mariana Trench that is the deepest place on Earth. His dive went 52 feet (16 meters) lower than the previous deepest descent in the trench in 1960.

Vescovo found undiscovered species as he visited places no human had gone before. On one occasion he spent four hours on the floor of the trench, viewing sea life ranging from shrimp-like anthropods with long legs and antennae to translucent “sea pigs” similar to a sea cucumber.

He also saw angular metal or plastic objects, one with writing on it. 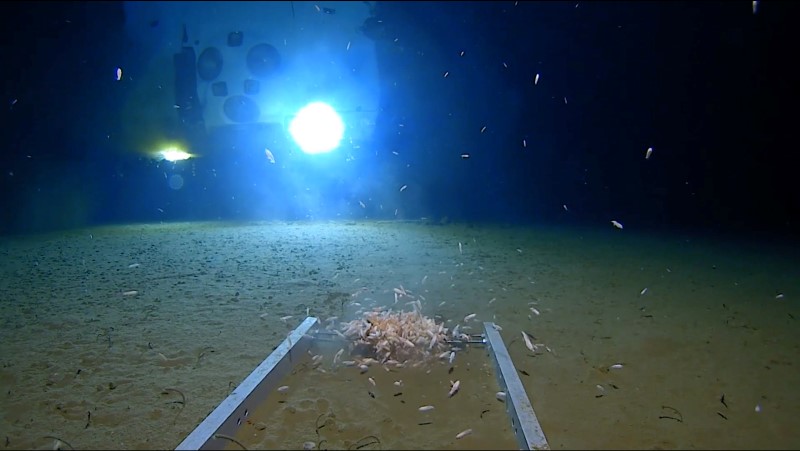 Sea creatures swim around a part of a submersible lander, illuminated by the light of the submarine DSV Limiting Factor on the floor of the Pacific Ocean’s Mariana Trench in an undated still image from video released by the Discovery Channel May 13, 2019. Credit: Reuters

“It was very disappointing to see obvious human contamination of the deepest point in the ocean,” Vescovo said in an interview.

Plastic waste has reached epidemic proportions in the world’s oceans with an estimated 100 million tonnes dumped there to date, according to the United Nations. Scientists have found large amounts of micro plastic in the guts of deep-dwelling ocean mammals like whales.

Vescovo hoped his discovery of trash in the Mariana Trench would raise awareness about dumping in the oceans and pressure governments to better enforce existing regulations, or put new ones in place.

“It’s not a big garbage collection pool, even though it’s treated as such,” Vescovo said of the worlds’ oceans. 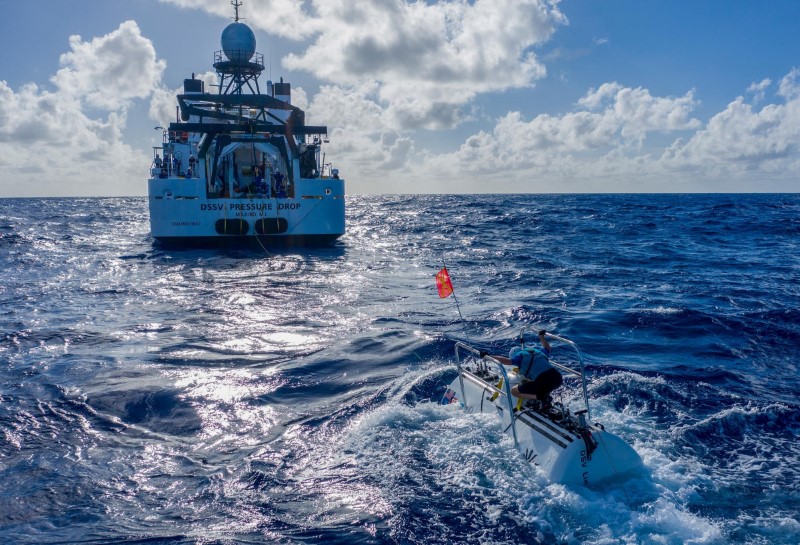 The submarine DSV Limiting Factor floats near the research vessel DSSV Pressure Drop above the Pacific Ocean’s Mariana Trench in an undated photo released by the Discovery Channel May 13, 2019. Credit: Reuters

In the last three weeks, the expedition has made four dives in the Mariana Trench in his submarine, “DSV Limiting Factor,” collecting biological and rock samples.

It was the third time humans have dived to the deepest point in the ocean, known as Challenger Deep. Canadian movie maker James Cameron was the last to visit in 2012 in his submarine, reaching a depth of 35,787 feet (10,908 meters).

Prior to Cameron’s dive, the first-ever expedition to Challenger Deep was made by the US Navy in 1960, reaching a depth of 10,912 meters.