The Story of How the Orphaned Tigress of Bandhavgarh Was Rehabilitated

The tigress has empowered forest officials to continue with their relocation experiments without worrying about a failure here or there. Why? Because the end result is wonderful. 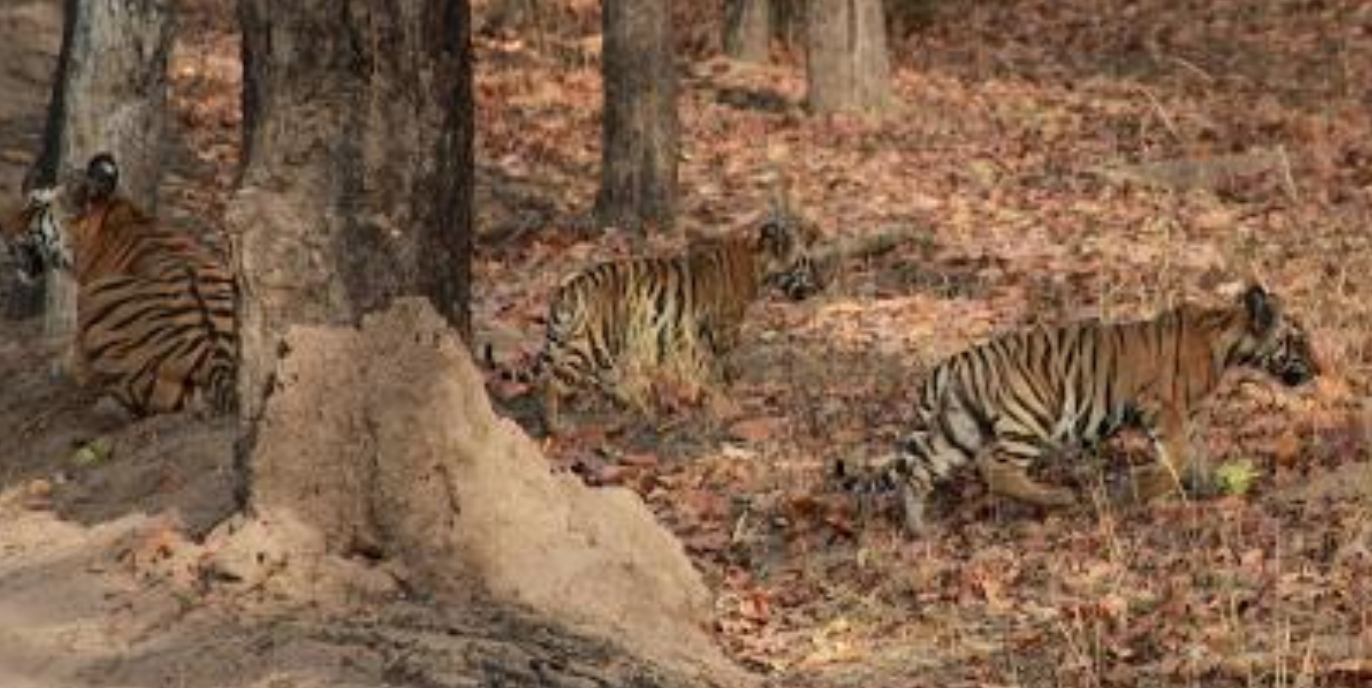 The Churna tigress as cub with mother and a male cub before being orphaned, 2010. Source: Muffi/Sarath C.R. Blog

The tiger’s charisma is beyond debate. Wildlife tourism in the country has been on the rise, and visitors at reserves and ‘tiger parks’ have often been content to have a glimpse of this majestic animal. I myself had occasion in June this year when I visited the Churna range of the Satpura Tiger Reserve in Madhya Pradesh and saw a tigress with three cubs.

It was hot, and the tigress had taken to a small pool of water sheltered by a huge rock at about 10 am. She was cool, calm and relaxed. The two female cubs were hiding in some undergrowth some 150 metres away but within the mother’s sights. Clearly, they were nervous and avoided visitors. They growled and made mock charge if we approached. The head mahawat monitoring the family told me, “The third male cub is getting more and more independent. It hangs around within the radius of about a kilometre from the family, joining them now and again.”

So it came as an immense shock, even to the extent of sounding incredible, when I learnt the history of this tigress. She was from the Bandhavgarh Tiger Reserve in the same state. She’d become orphaned when she was only four months old – barely old enough to eat raw meat, let alone hunt. Then, she’d been reared in an enclosure in semi-wild conditions, with some human support. At the age of four years, she was relocated to the Satpura Tiger Reserve and finally released into the wild, in the completely free conditions in Churna. Of course, she was being monitored around the clock.

In May 2010, her mother died in Bandhavgarh after she was reportedly hit by a jeep, leaving the tigress and her two male siblings, each around as old as her – no more than five months of age – to fend for themselves. The forest department had then erected a crude enclosure in a rush for these cubs. Sadly, before they could complete it, one male cub became poached by a male tiger. The remaining two cubs then hid in a deep and narrow cave and bereft of food or care for many days. They didn’t dare venture out. And when they were finally found and rescued, they were unable to stand, being inches from death.

Many conservationists and naturalists have been eager to write off such cubs. “We lost a beautiful tigress in Bandhavgarh and the double tragedy is that she has three lovely cubs. So we have effectively lost four wild tigers,” wrote the naturalist Sarth C.R. on his blog.

Better care and effort by a veterinary specialist and the field staff revived the cubs. After that, sensitive attention together with helping the cubs learn from experience and experimenting with various aspects of rearing cubs (what kind of enclosure to make, how much human involvement to permit, what kind of medicine to give, what food to feed, etc.) proved successful.

On June 6, 2014, at the Tala range of the Bandhavgarh Tiger Reserve, the principle chief conservator of forests (PCCF), the field director, the deputy director, a veterinary doctor from Bandhavgarh and the assistant conservator of forests (ACF) of Satpura were ready to help the orphaned tigress relocate from Bandhavgarh to Satpura. There had been relocations of tigers in India before that; nonetheless, they were tense because, after all, a tiger was involved. There was risk. Foresters often feel that there are few to appreciate their efforts when they get something right but many to criticise them when something goes wrong – even if despite their best efforts.

A team of doctors and some officials entered the Jhurjhura enclosure and located the tigress. She’d been tranquilised. After a routine health check, a radio collar is affixed around her neck – the device will be used for keeping an eye on her movements later – and she is placed in the cage she is going to be moved in. By 7.30 pm, the tigress is awake and well on her way to her new home, the amazingly rich Satpura reserve. At Satpura, the stage is all set. The tigress arrived at 12.10 pm and was assigned to the RF 197 plot of the Churna range. When the gate of the cage was lifted open, the tigress bounds out, completely free and ready to live a truly wild life. The tension is defused in seconds, after which there is only an eerie silence. In February 2015, the tigress delivered a litter. Today, this family is a bright ray of hope at the Satpura Tiger Reserve. It can add many more tigers to the reserve if all goes well. Indeed, Satpura needs it. Though the reserve was established only in 1999, it is large: it comprises the Satpura national park, the Bori wildlife sanctuary and the Pachmarhi wildlife sanctuary, a total of 2,133 sq. km. As a result, its density of tigers is low: as of 2014, the number of tigers over 18 months of age numbered 26.

The importance of Satpura cannot be overstated for it possesses an immense diversity of fauna, including 48 species of mammals, 258 avian species and 31 species of reptiles. Moreover, Satpura forms a part of one of the largest tiger habitats in the world, spread out over 10,000 sq. km. together with the Betul, Harda, Khandwa and Melghat forest divisions. According to the forest department of Madhya Pradesh, “The forest department of [Madhya Pradesh] was essentially born here when the soldier turned forester … James Forsyth constructed the Bison Lodge [at Pachmarhi] in 1862.”

The whole exercise of relocation and rehabilitation was good for the tigress, good for Satpura and good for wildlife conservation overall. With its success, it seems there may be more such relocations in the future, all to Satpura. “If the situation demands, then some problem-animals may be relocated to Satpura, though there is no immediate plan to relocate or not relocate tigers,” said Jitendra Agrawal, PCCF (wildlife) and the chief wildlife warden. “The relocation of villages has provided a landscape free of anthropogenic pressures. This would slowly get populated with herbivores and tigers can then follow.” It seems the tigress of Chunrna has empowered forest officials to continue with their relocation experiments without worrying about a failure here or there. Why? Because the end result is wonderful.