Throughout the Pandemic, Environmental Clearance Law Has Been Under the Chopping Block

Even the global health crisis that unfolded in the past year has not deterred the current government from executing its plans for ‘ease of doing business’. 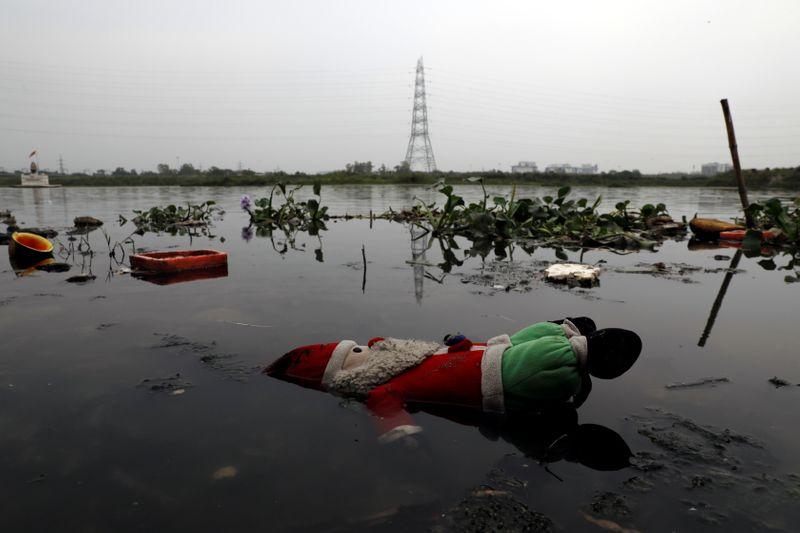 A stuffed toy is seen in the Yamuna river in Delhi. Photo: Reuters/Anushree Fadnavis

Meenakshi Kapoor and Krithika A. Dinesh
Environment
Government
Rights
23/May/2021

This, in a nutshell, is the onslaught that India’s law for granting environmental permissions to projects has been subject to in the last decade, largely to facilitate the ‘ease of doing business’.

A day before the world’s strictest lockdown, the Ministry of Environment, Forests & Climate Change (MoEFCC) published the draft environmental impact assessment notification (EIA) 2020, a new iteration of a law that outlines the procedure and requirements for most industrial and infrastructural projects to obtain a prior environmental clearance (EC).

Although the draft initially was made available for public comments for two months, after the furore its ill-timing created, the comment period was extended till August 11, 2020. The draft proposes huge dilutions in environmental safeguards.

Delineation of a procedure for projects to obtain ex-post-facto environmental clearance, provision for several categories of projects to bypass public consultation (PC), and an increase in the central oversight on the functioning of expert appraisal committees (EAC) were few of the most criticised changes proposed in the draft. Despite the restrictions on public movement and people’s struggles to ensure their economic security during the 2020 lockdown, it attracted over two million comments, most asking to retract the draft.

Also read: Why the Draft EIA’s Plan to Ease the Approval Process for Projects Is a Bad Idea

During this time, petitions were filed in four high courts (Delhi, Karnataka, Kerala and Madras) demanding translations and more time for public comments on the draft. The Delhi high court directed MoEFCC to publish it in regional languages in June 2020. The government, however, resisted it with all its might, first through an appeal to the Supreme Court against the high court order, which failed. Then it filed a petition for review of its decision with the Delhi high court. In the previous four out of five hearings, the government sought more time.

As for the translations, after holding out against the order on the pretext that it would cause ‘interpretation issues’,  at the end of September 2020, the MoEFCC shared that they translated the draft law into 22 regional languages, but to date, most of these are not available publicly.

One of the reasons that the MoEFCC gave for the new draft was that changes made to the notification in the last nine years needed to be compiled as a single document. However, this claim stands on thin ice as the trend of making changes to the law has not stopped. An analysis of the changes made in the last one year suggests that while a decision on the future of the 2020 draft is awaited, the 2006 notification has gone through over 30 alterations. Prior to this, as we reported in the past, it had gone through 53 amendments and over 200 office orders.

In October 2020, the Prime Minister’s Office asked for a presentation on the comments received. While it may appear that at last, the government is paying heed to public inputs, a compilation of the amendments and orders issued by the MoEFCC between March 2020 and now suggests that public opinion is hardly a matter of concern for this government.

In the last year, the EIA Notification 2006 was changed 33 times, through 24 official orders and nine amendments, as per our analysis. All the amendments were made without opening them for public scrutiny despite the Environmental Protection Rules of India mandating so.

The haste and secrecy with which these changes in the law have been made do not align with the intention demonstrated through the ordered assessment of public comments on the draft EIA 2020. In fact, the pace of changes has increased since September/October 2020, the very period when the government exhibited an interest in public comments. 26 out of 33 changes have been passed since September 2020.

Of the 33 changes, seven were made on the pretext of the pandemic and included an extension of terms of the central and state expert appraisal panels and authorities, extension of validity of existing environmental permissions of projects and exemptions to the pharmaceutical sector.

Besides pharmaceutics, the sectors granted relaxations include thermal power plants, manufacturing and mining of coal, minerals and ordinary earth for linear projects. All these changes were made ostensibly to facilitate the ‘economic recovery’ after the slump that was the compound result of demonetisation, bad implementation of GST Act and the nation-wide lockdown announced last year. 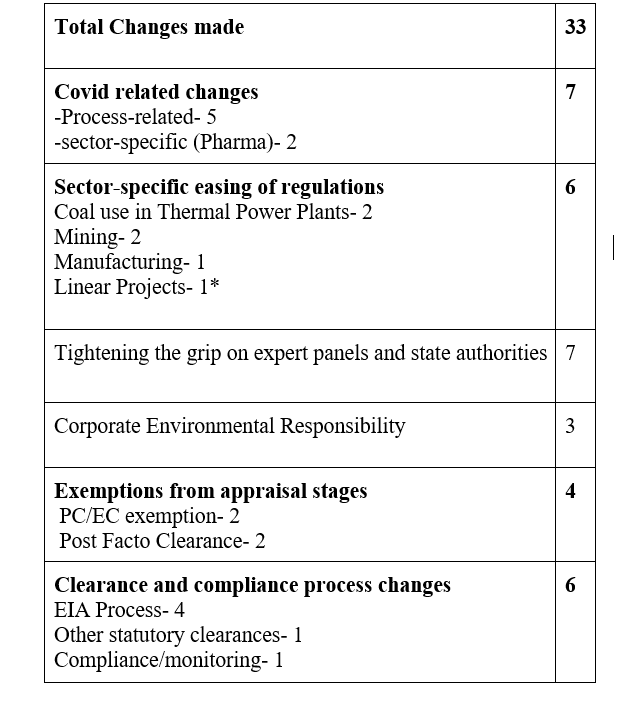 *The amendment brought in one change for mining projects too The table is based on an analysis of the orders and amendments as available on the website of the Ministry of Environment, Forests & Climate Change

CSIR-NEERI in its report of February 2021 identified eight aspects of the draft law which were found to be fraught with problems.

The CSIR-NEERI report, as mandated, provides a glimpse of the problems in the proposed law through a quantitative analysis but a lot has been missed out. For instance, many submissions had highlighted inherent problems with the appraisal process and suggested a complete overhaul of the EIA procedure in India. These suggestions are not part of the analysis.

The ministry had 725 days to finalise a draft, and it has already wasted a large part of it in contesting translation demands. So far, the CSIR-NEERI report remains the only step MoEFCC has taken towards engaging with the rich observations and comments from the public.

Moreover, our analysis of the alterations made to the EIA 2006 reveals that almost all the changes fall in these very baskets of eight contentious aspects identified by CSIR-NEERI. Not just that, some of these changes are the same as or have gone beyond what the draft EIA 2020 proposes.

While the government is creating an impression that it cares about public opinion, it is simultaneously making discrete changes through piecemeal amendments. Below we map these changes according to the controversial aspects identified in the CSIR-NEERI report and against the changes proposed in Draft EIA law 2020. 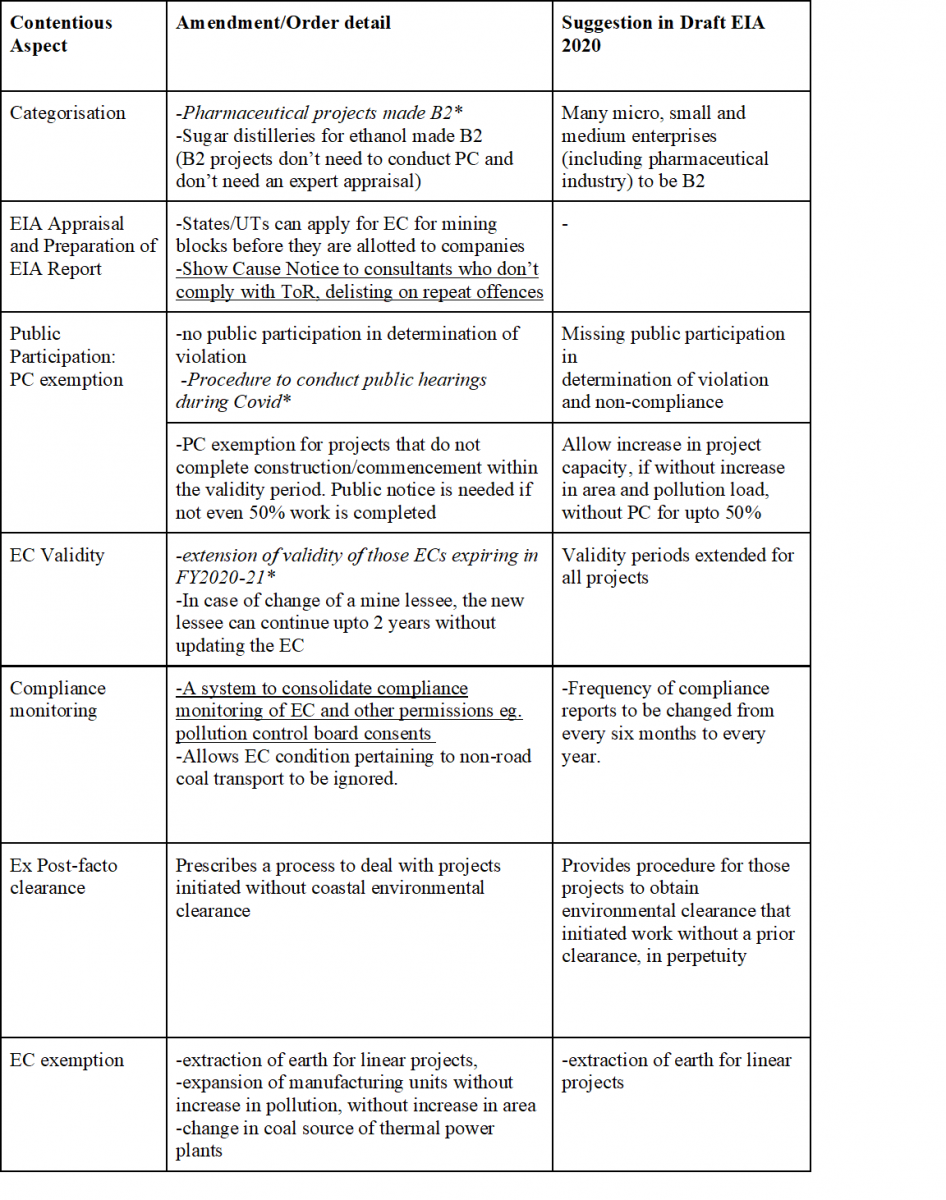 *Change made due to Covid. The table is based on an analysis of the orders and amendments as available on the website of the Ministry of Environment, Forests & Climate Change and the CSIR-NEERI report.

Even the changes that are positive (underlined in Table 2) seem to have stopped short at just the first step. For instance, delisting of EIA consultants who do not comply with the Terms of Reference doesn’t address the root cause of poor EIA reports prepared by these consultants – appointment of consultants by the project proponents.

Similarly, one of the changes asks EACs to declare conflict of interest, but continues with an opaque and compromised way of appointing these members, as highlighted by the reputed environmental lawyer Ritwick Dutta. Several of these members’ terms have been extended in the last year on the pretext of COVID-19.

Other environmental regulations too have come under the knife in this period. Relaxed parameters and extended deadlines to meet emission standards and fly ash utilisation goals for thermal power plants and coal auctions and mining reforms are some of these.

The ongoing work on the multi-crore Central Vista project, despite the surge in COVID-19 cases and the subsequent devastation, has hit many, especially in the urban middle class, as a clear signal of the current government’s self-serving priorities. But the priorities have been out of place for a long time.

Since this government took charge, it diluted India’s coastal protection law, forest conservation rules and pollution control protocols in favour of big businesses, jeopardising the country’s ecology, health and livelihoods. Even the global health crisis that unfolded in the past year has not deterred the current government from executing its plans for ‘ease of doing business’.

If anything, it has only hastened the stripping of India’s environmental safeguards on the pretext of ‘economic recovery’.  The haste couldn’t be more apparent than now when the proposed draconian law still hangs on our necks as a naked sword, and the government is serving several small blows at our environmental protections, while its citizens face the biggest health tragedy in human history.