Kutch, a typical desert during the summer, metamorphoses after rains into one of Asia's largest natural grasslands. It is a system so dynamic that throwing an invasive weed into the mix is like putting it on steroids. 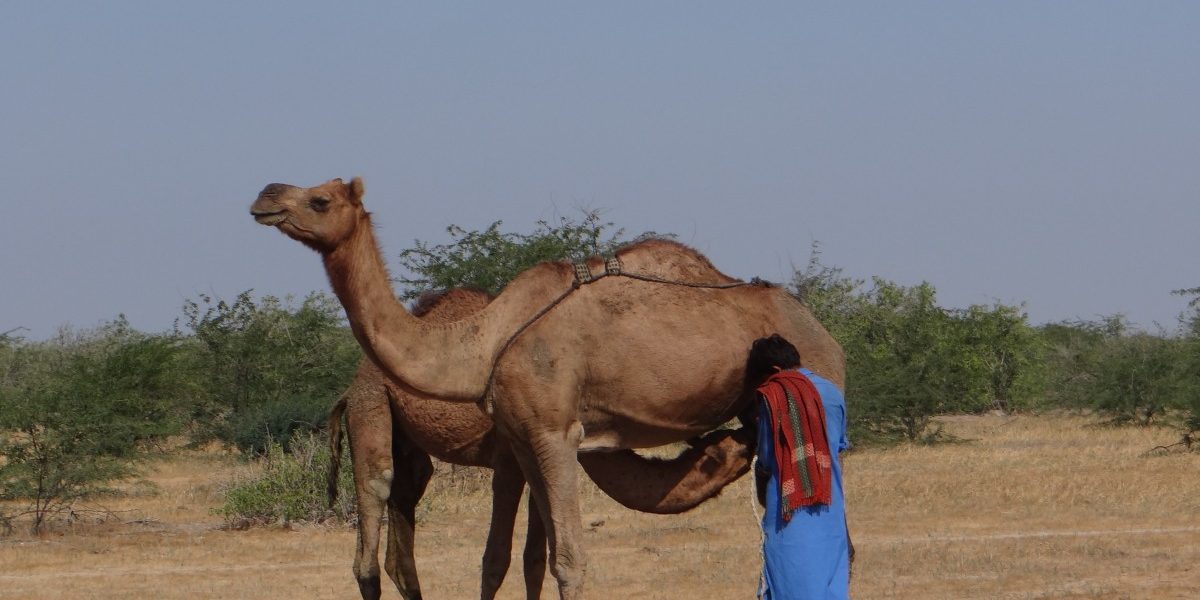 A camel in Kutch. Mesquite is visible in the background. Photo: Kadambari Devarajan

It was the third flat tyre in under a week. I traced the contours of white scratches on the metallic blue exterior of my trusted steed, as I waited in the characteristic arid, dusty noon heat of the desert, to get the puncture fixed at the only repair shed in the remote village of Hodka, Gujarat. Later in the day, just getting ready to sleep at the field station, I applied some coconut oil to soothe the stinging in my arms. These will eventually form hard, thin lines on my skin, that will in time fade away, unlike the permanent marks on the chassis of my vehicle. Temporary reminders of fieldwork usually, some of these battle scars will remain, lingering long after I leave the desert.

The story behind the scratches leads us to a plant species bemoaned by many organisms, humanoid and otherwise, that encounter it. This species, Prosopis juliflora, or mesquite, as it is known in other parts of the world, has a long and complicated history that leads us to present day’s Kutch.

Kutch, in northwestern India, dons many hats through the seasons. A typical desert during the summer, it metamorphoses after rains into one of Asia’s largest natural grasslands.

It is a system so dynamic that throwing an invasive weed like mesquite into the mix is like putting it on steroids. The name on the streets for the thorny and leguminous mesquite is gando baaval – Gujarati for ‘crazy weed’. I don’t think anything sums it up as well. Mesquite is native to Mexico but is more fascinating outside the arid Mexican hinterland. 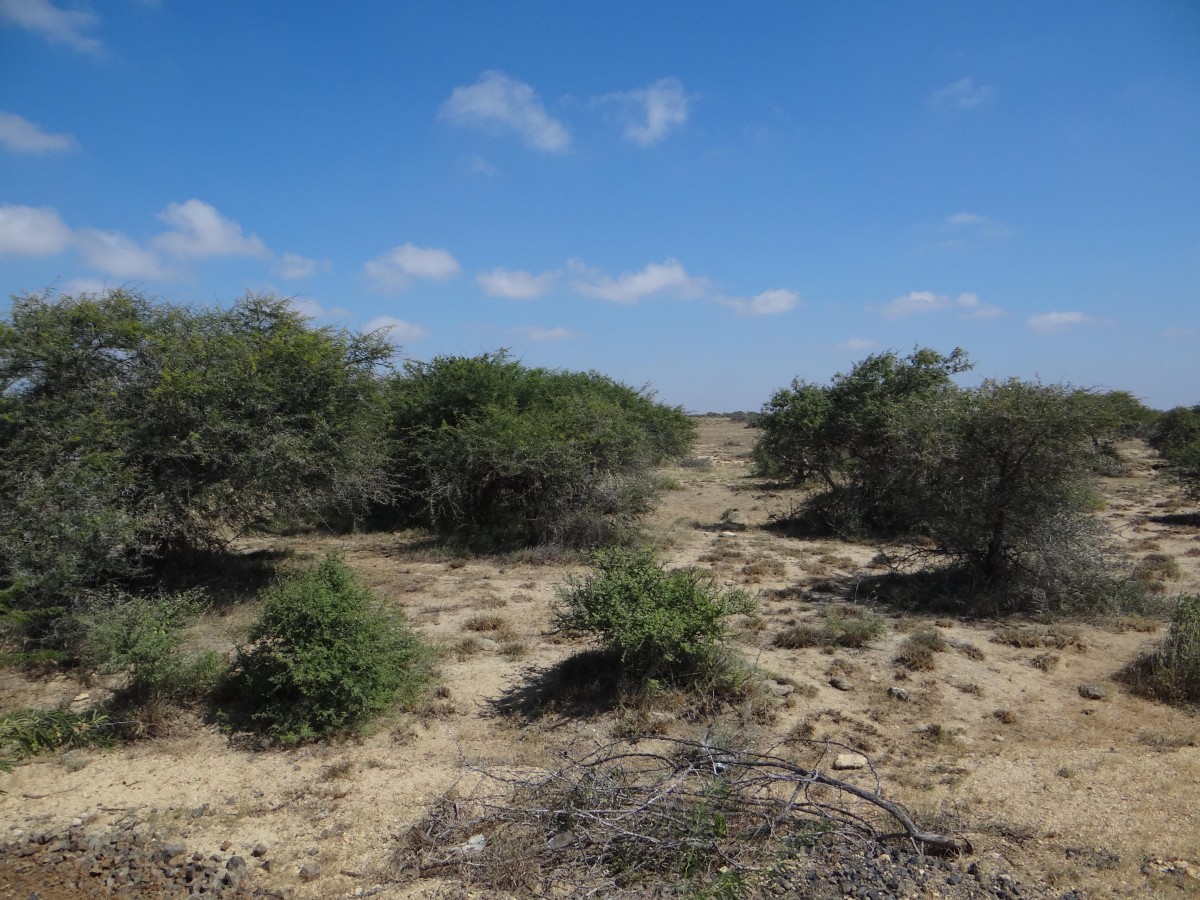 Sometimes a shrub, sometimes a tree, always thorny, always hardy. Mesquite is rather average in height and looks by a tree’s standards. It’s far from elegant, with spindly branches growing in all directions, abounding in wicked thorns and a feather-like arrangement of slender, and rather washed-out, dark-green leaves. It certainly doesn’t have the majesty and sprawl of the banyan (Ficus benghalensis) nor the magnificent height of the sal (Shorea robusta). But for these shortcomings, mesquite is quite the traveler and has created quite a stir around the world for something that is quite unexceptional.

The plant is a fighter, not just surviving but thriving where other vegetation dares not. Every thin and scrappy-looking leaf, each vicious thorn, every pod of hardy seeds, and each garishly yellow inflorescence seems to be an adaptation – a characteristic of the fittest winner in that eternal fight for space in the unending game of life.

The plant biologist Hope Jahren writes so eloquently of invasive species in her 2016 book Lab Girl, “A plant that lives where it should not is simply a pest, but a plant that thrives where it should not live is a weed” (emphasis in the original). Mesquite has earned its right as a weed, inducted as it is into the Invasives Hall of Fame (if there were one), for there is nary a pest as vilified and hated as Prosopis juliflora – at least in the desert flatland of Kutch.

The local people share a love-hate relationship with Prosopis. They are traditionally nomadic pastoralists, many of whom are frustrated with how mesquite is taking over the grasslands, modifying the landscape in strange and myriad ways. Their livelihood depends on these shrinking grasslands, where their cows, buffaloes, goats, sheep and camels roam and graze. But humans have an uncanny knack for making lemonade when life gives them lemons. There is a thriving charcoal industry that has taken root in these parts. 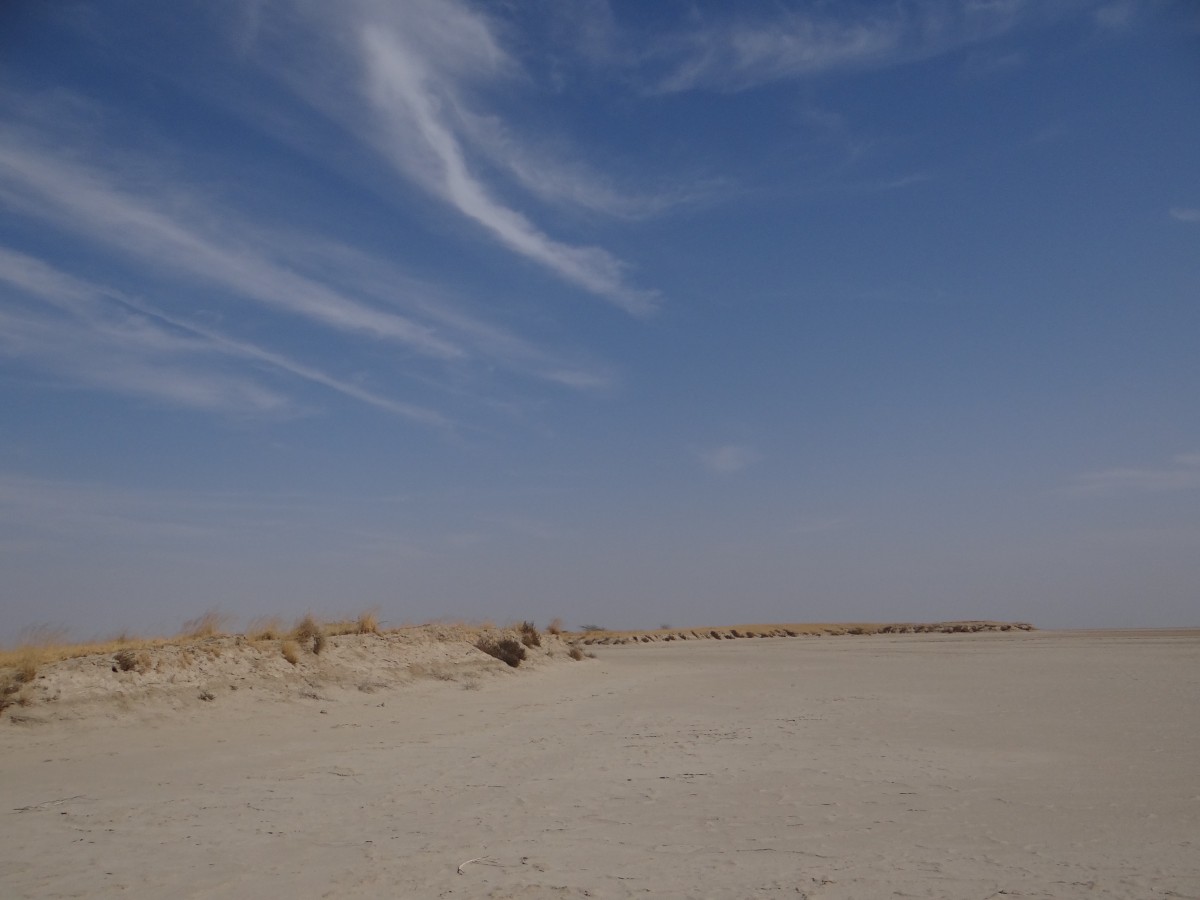 How did the exotic mesquite land up and wreak havoc thousands of miles from its motherland?

One story goes that, since Prosopis is so hardy and drought-resistant, the Gujarat Forest Department decided to introduce it in Kutch a few decades ago to help fight desertification. Another story goes that a maharaja decided to rewild the barren Rann in an attempt to stop the encroaching desert. Either way, the advent of mesquite marked a turning point in the history and geography of Kutch. The arrival of this plant changed the desert ecologically forever.

What could Kutch have looked like before Prosopis‘s invasion? It was probably a mosaic of salt flats interspersed with grasslands. There would have been the odd wetland, of the sort that exists with mesquite today (the only way for the wetland to disappear is if another invasive species decided to fill the lake and build a factory there instead). In saline areas, the vegetation must have been clumps of Suaeda, a plant beloved by most creatures of the desert (I can personally vouch for the delicious salty snack the succulent leaves make for). The wetlands were likely to have been dominated by Salvadora bushes and Acacia trees, those mainstays of the savannah. Often researchers have unjustly ignored sedges, clumping them with grasses under the umbrella term of ‘grasslands’. Each community of grasses and sedges results in its own microbiome of interacting organisms.

The predominantly herbivorous spiny-tailed lizards would be grazing away to glory in a grassy outcrop. Some of the saline areas were likely to be pockmarked with burrows of rodents of all shapes and sizes, each species of gerbil with its own unique ecological niche. Further out in the white salt desert, mammalian carnivores might have shared space in the numerous mud hills that stand out like a sore thumb in the otherwise flat landscape. Wolves might have been marauding the swathes of grass, while caracals and Indian foxes might have moved about in the grassy knolls. Nilgai, chinkara and blackbuck were likely to have been crisscrossing the plains. And the bird life – oh, one could wax eloquent about the raptors and larks, pipits and sandgrouse, bustards and floricans that were once common throughout the landscape.

But mesquite came, and paradise was lost. Contrary to popular perception, a desert is not short on resources or organisms; it is simply populated with creatures uniquely adapted to their environment. Mesquite, however, is a clingy parasite that uses up all the hosts’ resources, milking them dry. Prosopis forms such dense clumps and clusters wherever it’s present that most mammals cannot quite use the habitat at all.

The thorns make it so difficult that most mammals, humans included, stay away from these patches come hell or high water. Wild boar, black-naped hare, rodents and some of the larger herbivores can be found in the peripheries of a mesquite patch, wherever there is an edge wide enough for animals to avoid the shrub’s nasty spines. Golden jackals seem to prefer the sparser patches. Where wolves were once plentiful, they are these days a rare occurrence, while the once abundant great Indian bustard is now on the verge of extinction. A lot of bird species that nest on the grass seem to be declining in population, due to loss of habitat but also due to an increase in dogs and jackals that feed on their eggs.

Also read: Leaving the Kutch Grasslands, in Search of Grass

The nomadic pastoralists of Kutch seem to be settling down here, resulting in more villages. And more households often means more commensals, so enter rats and dogs. The pastoralists supplement their traditional income using opportunities provided by tourism, growing handicraft and cottage industries, and the charcoal industry spawned by the plentiful Prosopis. Mesquite is harvested for its wood, which burns evenly and has a high calorific value, making it valuable as charcoal.

Livestock has not been spared either. Some of them, such as the traditional Kankrej cattle, consume the mesquite pods but with dire consequences to their survival. On the other hand, the Banni buffalo’s numbers have been on the rise due to their tolerance of the pods. This in turn has a direct impact on milk production in the region. 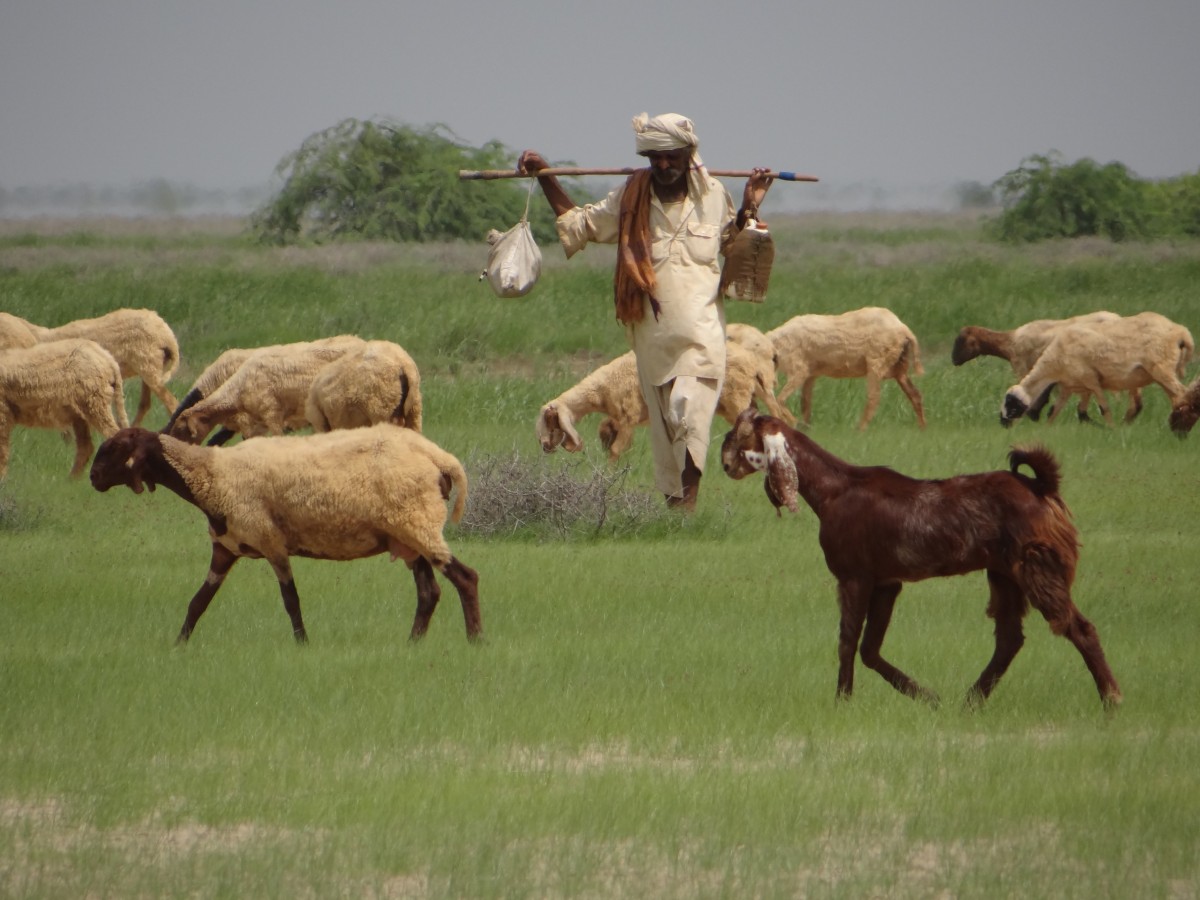 Herbivores consume the mesquite pods and disperse it. Mesquite takes root fairly easily and spreads like wildfire. The speed and tenacity with which this woody shrub grows has a tremendous impact on the environment – soil, wildlife, plant community composition, salinity, everything. The plant is leguminous and known to be nitrogen-fixing. An increase in mesquite has consequences for carbon sequestration and evapotranspiration as well as soil composition. In other words, Prosopis can precipitate a variety of changes in an already resource-limited system based on whether there are grasses or trees.

There seem to be a lot of new forces at play in these grasslands – wildlife and livestock, changes in carbon, new parallel economies (tourism and charcoal, in addition to the existing pastoralism) resulting in more people and the associated commensal.

Also read: How British Sentimentality Shaped a Corner of the Nilgiris

I used to dread setting up camera traps in areas with this thorny adversary. It was frustrating work for sure, but bloody and scratched and sore in body and soul, it was also depressing. The closed, cloistered environment sharply contrasted the open, vast, endless plains that constantly remind me of what used to be. How the landscape has changed in a few short decades! While I admire this one species that has cut across taxonomic groups and has enormously impacted plants, invertebrates and vertebrates alike, I am also filled with foreboding and dread. Should this be stopped or is the damage beyond repair? Should we just accept defeat and treat this landscape overgrown with mesquite as the new normal, and let nature run its course from now?

The more important questions are: what might the landscape look like in a few years? Should there be any intervention? If so, what, when, and how much? If we just let things be or continue this way, is there scope for recovery? What will recovery look like? These are simple questions but the answers will take a lot of work. A difficult proposition it may be but sometimes we just have to make a decision one way or the other.

Kadambari Devarajan is an ecologist working on carnivore communities. She is currently pursuing her PhD in ecology and moonlights as a science communicator.