The Ways in Which Delhi's Pollution Can Kill You

Before you draw your next breath, be aware that it could seriously damage you. Scientists have estimated that air pollution by prevailing PM2.5 levels will have led to 6.6 million premature deaths by 2050. 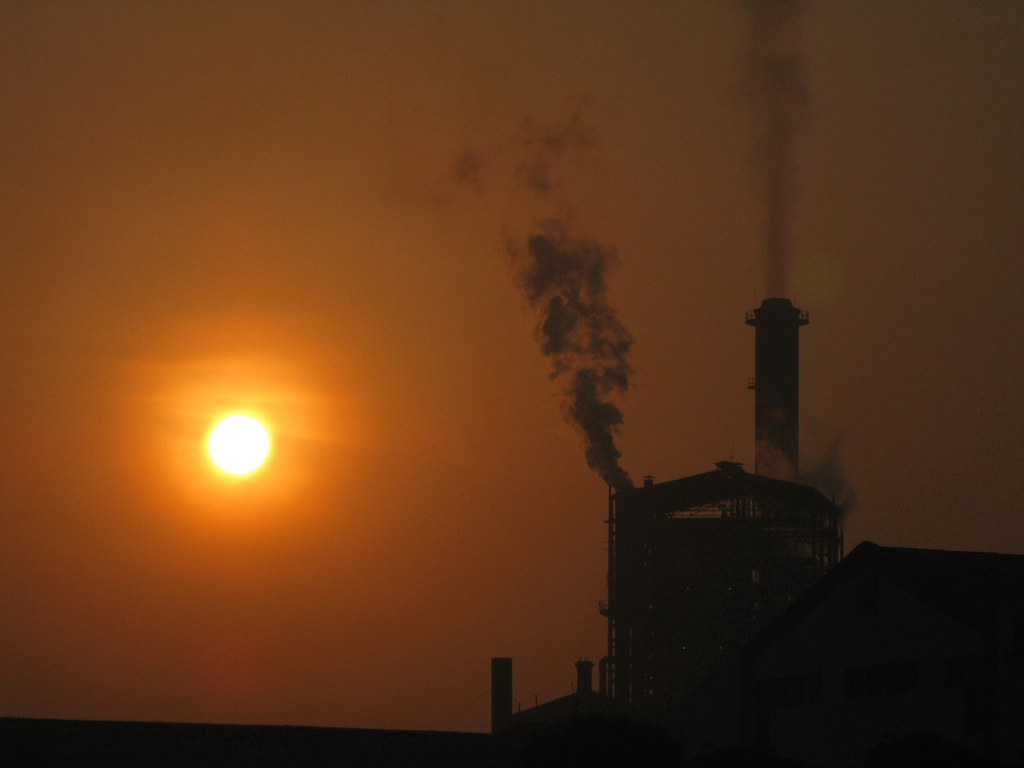 Picture of a smoggy sunrise shot in an unknown location in India. Credit: spykster/Flickr, CC BY 2.0 There is now a tsunami of evidence that air pollution by increased particulate matter raises the incidence of cardiovascular disease, hypertension, diabetes, respiratory diseases and lung cancer. Bad air impedes the optimal growth of lungs in children and also adversely affects cognition. There are reports that it can also lead to Alzheimer’s disease and Parkinsonism as well. Delhi has gathered for itself the dubious distinction of being the most polluted city in the world, striding ahead of Beijing. The state and central governments are making the necessary noises but predictably haven’t yet come up with a concrete action plan. The state government, for starters, has come up with the plan of permitting odd and even number registered cars to move on alternate days. It is estimated that significant reduction in PM2.5 levels will be achieved with about 1.4 million vehicles off Delhi roads on a single day.

But then the current government cannot be blamed for a crisis that has been developing for decades. The Supreme Court mercifully is seized of the grave problem and is deliberating imposing necessary remedial measures. It has in the meantime banned the sale of diesel SUVs till April 2016.

An article by academics of the Delhi School of Economics published by the World Bank has reported that installation of the Delhi Metro has substantially lowered levels of carbon monoxide (CO) and nitrogen dioxide (NO2) at the Income Tax Office crossing in New Delhi. The report suggests that this reduction in polluting gases by almost 30% (assessed by a monitoring station in the vicinity) was probably due to reduction in vehicular traffic because of availability of the Metro for the commuters. The authors have noted that during this period, almost two million passengers used the metro on a daily basis. They have also pointed out that domestic bio-fuel usage, diesel generators, waste burning and construction activity contribute some 20-25% of Delhi’s air pollution.

The study however misses out entirely on the noxious role of fine particulate matter less than 2.5 microns in diameter (PM2.5). We must understand that the haze we encounter every day during daylight and under the dirty glow of streetlights after sunset are due to PM2.5, and that various prospective long-term exposure (years or decades) studies have documented that elevated PM2.5 levels are associated with increased risk of cardiovascular deaths. Ambient and domestic air pollution is among the top 10 contributors to the global burden of disease. There is also the worrying evidence that short-term exposure, from a few hours to a few days, can also trigger acute myocardial infarction and unstable angina. Studies have shown that short-term exposure to raised levels of PM2.5 can spark an ST-segment elevation myocardial infarction (STEMI) – a full-blown heart attack.

These microscopic particles originate from smoke, and from dirt and dust from factories and roads. These particles can stay in the atmosphere from days to weeks and travel hundreds of miles. When you inhale, you breathe in these particles suspended in the air. An air quality index of 100 for PM2.5 corresponds to PM2.5 levels greater than 40 micrograms per cubic meter. The WHO has chosen (PDF) an annual average concentration of 10 µg/m3 as the threshold above which there are adverse health affects. Health risks associated with shorts term exposure have also been found to be significantly raised in cities of developed and developing countries.

A recent North American study examined 20 years of acute coronary syndrome event data in patients who had undergone coronary angiography. These data were linked with air pollution plus weather data and analysed using a crossover design. Elevated short-term exposure of PM2.5 was associated with a greater risk of heart disease, but only in those people who already harboured heart disease confirmed by coronary angiography. The authors suggest that increased incidence of ST-segment elevation was probably due to destabilisation of blocks (plaques) in the coronary arteries. It has been recorded that an increase of 10 µg/m3 in PM2.5 levels (in the previous hour) can increase STEMI by as much as 8% to 26%. The study discusses that risk threshold be maintained at 25 µg/m3 of PM2.5 with a linear effect above this level.

Short-term exposure to elevated levels of PM2.5 leads to a heightened inflammatory state, which promotes thrombosis apart from causing endothelial dysfunction. A Chinese study has documented reduced inflammatory and thrombogenic biomarkers by substantially reducing PM2.5 levels for as briefly as 48 hours by air purifiers.

So before you draw your next breath, be aware that it could seriously damage you. It could kill you, too. Scientists estimate that air pollution by PM2.5 has led to more than 3.2 million premature deaths globally (as of 2010), and this figure could jump to 6.6 million by 2050. Most deaths occur in developing countries with high population and poor air quality due to heavy industrial activities. Some 32% of the premature deaths in China (as of 2015) were because of pollutants from coal, biomass and diesel generators. Air pollution kills approximately 4,000 Chinese people in a day. Around 1.6 million people in China die each year due to heart, stroke and lung problems as a result of bad air. There were 60,000 to 88,000 deaths due to air pollution in 2010 in the USA. More people die of air pollution in the world than malaria and AIDS.

Domestic energy use causes 50% of the 645,000 deaths in India, and the same pollutants account for 50% to 70% of deaths in other Asian countries. It is imperative that the people of Delhi are provided the grim picture, that most air pollution deaths are caused by PM2.5 that is small enough to get deep into the lungs and also from there into the blood stream to play havoc with the human body. These particles cause heart attacks and strokes (three quarters of the 3.3 million deaths) and the remaining die because of lung disease and cancer.

Agricultural emissions of ammonia, mainly from cattle, pigs, chickens and overuse of fertilisers, react with fumes from traffic and industry to produce tiny air pollutants. These PM2.5 particles account for most premature deaths in Europe, Japan and eastern US. About 48% of premature deaths in the UK are due to agricultural pollution. Considering the grim situation in Delhi, the government must ensure limits to reduce air pollution are strictly enforced. The wintry morning mist barley lifts the entire day because it is largely smog. And by night the smog morphs to a carcinogenic haze that stings your eyes thanks to the thousands of trucks that infest Delhi in those hours.

We can now no longer sacrifice our environment for the sake of money. A balance has to be found because time is not running out – it already has, and we can’t let the present go up in smoke.