The Story of the Campaign to Save Delhi’s Naini Lake

Seeing the strength of the campaign, politicians from all major parties have now extended support for the cause. 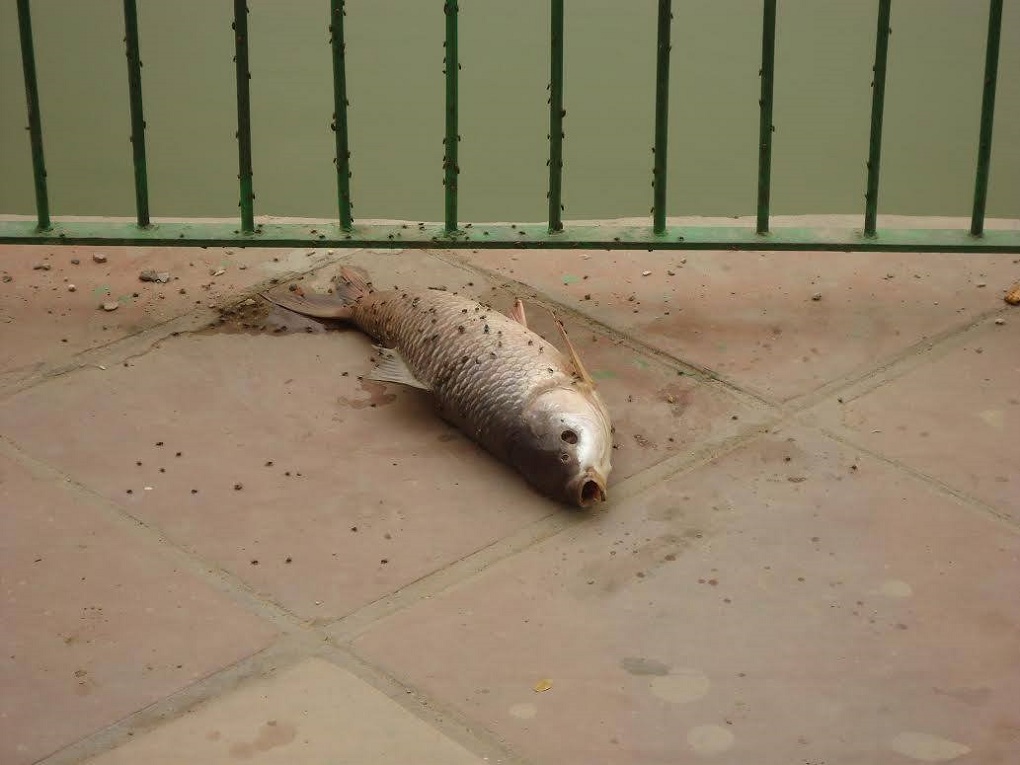 In July 2013 the lake’s surroundings became a graveyard for fish. Credit: Richa Chaudhary

People mostly look at me in disbelief when I mention I live across a lake in Delhi, India’s capital city, known more for its concrete than its wetlands. Most people, in fact, are not even aware that such a natural lake exists in the heart of Model Town, the ‘upscale’ north Delhi locality.

It is a minor miracle that the Naini Lake has survived two major attempts to convert it into a park. But what was once a blueish gem before the first real estate developers arrived in the early 1960s, has now taken on an unpleasant greenish-blackish shade. Despite its dirty waters, Naini Lake stands like an oasis surrounded by houses and roads with walkways in the reclaimed area. It is home to water snakes, birds like pond herons, white-breasted kingfishers, migratory birds like cormorants, fish species and some resident ducks.

When I was a child, it was also full of toads, lotus plants, dragonflies as well as various insects and birds that we no longer see now. My sister and I have fond childhood memories of our mother showing us lotuses and treating us to lotus-seeds fresh from the lake. And my father would take me for boating before sending me off to school. Almost every resident in Model Town of my generation has grown up feeding ducks, enjoying boating during holidays and taking walks around the lake.

But with the changing landscape, construction of boundary walls and cementing of its catchment area, the very character of lake started changing. It started giving off a stench, which became nauseating in the summers. It became wrapped in the eerie silence that comes in the absence of buzzing insects. A beautiful natural island where birds would gather was overtaken four years ago by a giant musical fountain, installed by the government and the local residents’ welfare association (RWA). Soon, the island had all but disappeared and the vegetation was destroyed.

On one hot July morning in 2013, my sister Richa Chaudhary was horrified when she went to the lake for her usual morning walk. Naini Lake had turned into a graveyard with heaps of dead fish floating in it. People had hired locals to fish out the dead and gasping fish which were left on the pavement to rot for days. No one cleaned the mess for a week and people stopped visiting the lake. Appalled by what was happening, she contacted a national news channel and reported on the issue as a citizen journalist.  Some other residents also joined in to voice their concerns. Despite this, the authorities failed to take any action. It has been almost three years, but fish deaths have since become a regular occurrence.

In March 2015, after the Aam Aadmi Party (AAP) came to power in Delhi, then tourism minister Jitender  Singh Tomar visited Naini Lake and announced it would be taken up as the new government’s first tourism project. At the meeting, while some RWA members were demanding big motorised boats for private parties, some of us were arguing for ecological revival of the lake.

When we pressed for it, the minister asked us to submit a scientific report. One of India’s leading ecologists, C.R. Babu, visited the lake on our request and said in his report, “… the lake is nearly ecologically dead.” This came as a shock for many residents. Dr Babu listed simple natural measures to revive the lake – these included creating inlets and outlets for rainwater and introducing the right kind of fish and aquatic plant species. As there are hardly any aquatic plants, there is poor dissolved oxygen level – the main cause for the unnatural fish deaths. The report has been submitted to all relevant departments in the Delhi government, including the chief minister and the Municipal Corporation of Delhi (MCD).

Politics and discord over the lake

The fact that Delhi is the national capital has presented unique challenges in the process of the lake’s revival. You are confronted with politics at every step. First, the lake is owned by the MCD but maintained by Delhi Tourism, part of the government of Delhi. Delhi Tourism is also the organisation that runs boating on a contract basis. Having two agencies on the lake means both shrug off responsibility. Second, bringing both agencies together for the common goal of lake conservation is becoming challenging as Delhi Tourism is under the AAP-led Delhi government while the Bharatiya Janata Party (BJP) controls the MCD – and both parties are at loggerheads with each other. Third, some members of the local RWA want the lake to be commercialised and have allegedly been trying to stymie efforts to revive the lake.

In June 2015, the RWA with the help of the Delhi Tourism department got a private company to run water sports on the lake for a three-month trial period. The activities included open-air rifle shooting, archery, ziplining, rock-climbing and zorbing, all which were a serious disturbance to the bird habitat.

In response, some of us decided to bring people together through Facebook and WhatsApp. And a Save Naini Lake campaign was born overnight. Residents of Model Town began signature campaigns and started visiting neighbourhoods and parks with copies of Dr Babu’s report to lobby for support for revival of the lake. Hundreds of people joined in. A leading newspaper in Delhi published an article as well, which created ripples in government circles and in the locality.

Kapil Mishra, the current tourism minister of Delhi, met us and promised us that the lake would be revived. He even met Dr Babu to discuss the revival of all 600 water bodies in Delhi. However, the issue has remained stuck because of discord between the MCD and Delhi government.

‘Save Naini Lake’ campaigners are keeping up the pressure on the government with phone calls, messages, signature campaigns and meetings. One good result is that the private company in September 2015 had to shut down business on the lake. We also succeeded in getting them to pull down all structures like the watch tower.

On October 1, a day before Mahatma Gandhi’s birth anniversary, 200 residents defied the many efforts to thwart their mission and took out a protest march. They took leave from work and got their children to skip school to march in solidarity for the lake. The slogan ‘Save, save Naini lake!’ rent the air. Interns and experts from the Tata Institute of Social Sciences – National Water Mission also joined in.

Seeing the strength of the campaign, politicians from all major parties have now extended support for the cause. However, work has not begun yet. Residents and schoolchildren are jointly sending daily postcard reminders to the government and MCD officials on the issue. People who are living in other cities and know about the charms of the lake have also begun sending postcards to urge the government to take immediate action.

We are also conducting awareness drives to stop visitors from throwing trash and from feeding ducks and fish as it further degrades the water quality. Due to the campaign, the government has started talking about reviving Delhi’s 600 water bodies with Naini lake as a role-model.

People feel a sense of belonging and Naini has become ‘our’ lake. The term ‘ecological revival’ was completely new for both the citizens and the government. With people now demanding lake restoration; the vocabulary of the local politicians is also changing.

With residents becoming vigilant, MCD staff pays extra attention to the lake’s cleanliness. There has been a dramatic drop in the number of people throwing trash and food in the lake as well.

This article originally appeared on thethirdpole.net.