The Mysterious Plants That Thrive in Darkness and Steal Food

On Japan’s forest floors, there are plants that have given up on photosynthesis. These mycoheterotrophic plants are instead parasitic, drawing nutrition from the network of fungi running under the forest floor.

When Kenji Suetsugu is out looking for plants in Japan’s forests, he’s not looking for the usual green ones. Instead, on dark forest floors, where little light penetrates, Suetsugu painstakingly searches for tiny flowering plants that have more or less given up on photosynthesis and lack chlorophyll, the characteristic green pigment that helps plants make their own food from sunlight.

He’s drawn in particular to plants that are mycoheterotrophic: parasitic plants that take their quota of nutrition from networks of fungi under the forest floor, without giving anything back to the fungi.

The problem, however, is that these plants are incredibly hard to find. They tend to stay hidden underground and show up above ground only to flower or fruit, barely peeking through the leaf litter. This means that pinpointing them requires top-notch plant identification skills, special forest-floor sleuthing abilities, the support of past experiences, and some chance encounters.

For the past 10 years, Suetsugu, a botanist and associate professor at Japan’s Kobe University, has been on a mission to identify and document mycoheterotrophic plants across Japan’s forests. In his surveys he’s uncovered 10 previously undescribed species of these elusive plants. A few of these species are especially unique, Suetsugu says, such as the orchids that never bloom.

Gastrodia amamiana is one such orchid species that Mongabay wrote about recently. The plant, known from the islands of Amami-Oshima and Tokunoshima, not only relies completely on fungi for nutrition, it produces flowers that never seem to open up. Flowers typically need to bloom for a plant to be pollinated by wind or insects and other animals. Yet despite this apparent lack of pollination by other agents, this orchid species still produces fruits. 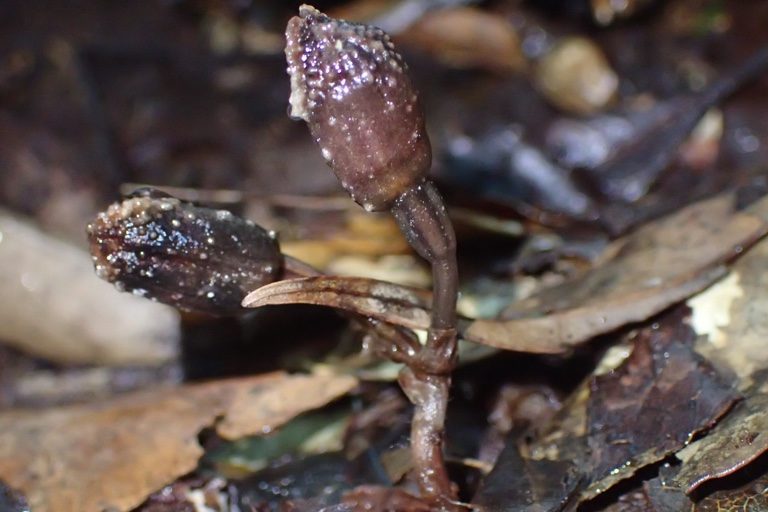 Suetsugu says that while mycoheterotrophic plants tend to stay hidden, their presence is a strong indicator of a forest’s health. These plants need fungi to survive, and the fungi in turn are nourished and supported by the network of trees in the forest that they’re in a symbiotic relationship with. Disturbances to forests can upset these networks, causing the mycoheterotrophic plants to disappear. In fact, many species are now rare and threatened with extinction, Suetsugu says.

Also read: ‘How I Became a Tree’ is an Ode to All That is Neglected

In one of the forests where G. amamiana was discovered, for example, Suetsugu has seen evidence of tree thinning. The dry soil resulting from this disturbance could dry out the fungi that the orchid depends on, he said recently in a statement.

In a brief chat, Mongabay spoke with Suetsugu about the strange world of mycoheterotrophic plants, and why it fascinates him.

I was born in Nara City, Nara Prefecture and grew up near Nara Park, which has a rich and unique biota. My early childhood experiences of this habitat stimulated my interest in biological interactions and the natural history of intriguing organisms in terrestrial ecosystems. 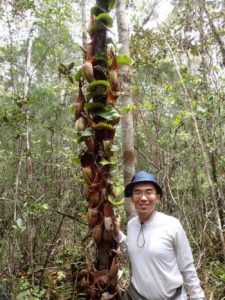 When and why did you start studying mycoheterotrophic plants? What fascinates you the most about them?

The color green is a defining feature of the plant kingdom, and plants are generally assumed to have an autotrophic lifestyle [capable of making their own food]. However, several lineages of land plants have evolved dependence on other organisms for their nutrition and can consequently be categorized as heterotrophs. Their bizarre morphology and ecology fascinates me.

In fact, most terrestrial plants, from bryophytes to angiosperms, form mutualistic relationships with fungi, whereby the plant provides carbon source [or sugars that they make] in exchange for essential mineral nutrients. Mutualisms, including mycorrhizal mutualisms, are often characterised as a balanced, reciprocal arrangement for the exchange of resources between two distantly related organisms.

Such relationships also provide a window for exploitation by parasitic species that can acquire a resource without providing anything in return. Mycoheterotrophs are dependent on their fungal hosts for the essential supply of carbon resources in which the normal polarity of sugar movement from plant to fungus is reversed.

Therefore, mycoheterotrophs are an interesting example of cheaters. Unraveling the ecological and evolutionary processes that govern the transition of autotrophic plants to heterotrophic plants will provide the deeper understanding of the dynamics of the mutualism and parasitism. I have wanted to elucidate how and why plants have lost their photosynthetic capacity and have been studying them for more than 10 years.

Could you tell us about your project to document mycoheterotrophs in Japan?

The distribution and diversity of mycohetrotrophs remains underestimated because plants are easily overlooked in the field due to their short flowering seasons and small size. Therefore, we are investigating mycoheterotrophic flora to enable us to study further. 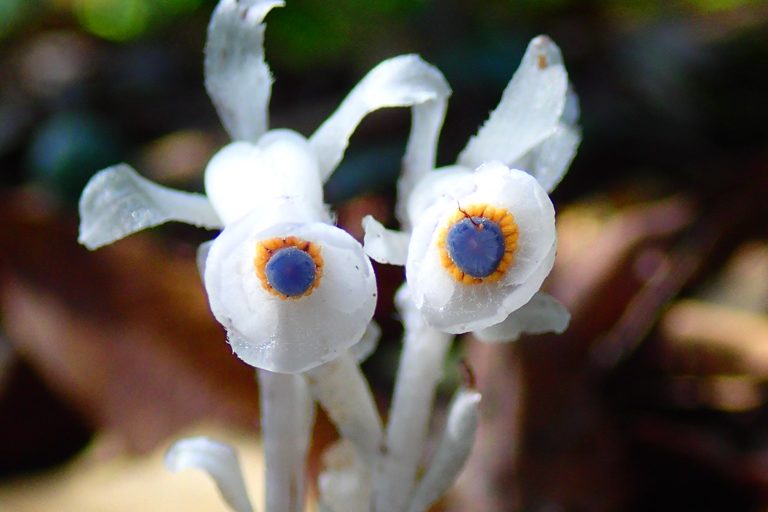 How do you find a mycoheterotrophic plant?

Since mycoheterotrophic plants are very difficult to find unless they are flowering when botanical surveys are conducted; trained skills are required to identify the species characters. Actually, discovery of these taxa requires rich experiences and knowledge. It’s difficult to convey this in a detailed way. No special tools [are needed to study them], but a species-rich and old forest can be an indicator of mycoheterotrophic plants.

How many new species of mycoheterotophic plants have you described from Japan so far?

Some of these species you’ve described have flowers that never open. Could you tell us about how these plants survive without sunlight and pollination by other agents?

Actually, some species such as Gastrodia amamiana were particularly special discoveries because it is both completely mycoheterophic, deriving its nutrition not from photosynthesis but from host fungi, and completely cleistogamous, producing flowers that never bloom. Cleistogamy, literally meaning ‘a closed marriage,’ refers to plants that produce flowers in which self-fertilisation occurs within closed buds.

However, this is a somewhat risky strategy as the selfing progeny are also less able to adapt to changes in spatially and temporally heterogeneous habitats. The evolution of complete cleistogamy is somewhat of a mystery, since outcrossing should overcome the negative effects such as the accumulation of deleterious mutations and a slowdown in the rate of adaptation. The discovery of species with flowers that never open provides a useful opportunity to further investigate the ecological significance, evolutionary history, and genetic mechanisms underlying the mysterious evolution.

What’s your favourite mycoheretrophic plant from Japan, and why?

Gastrodia takeshimensis. This is the first species I discovered and described.

The description of a new flowering plant species in Japan is itself a very rare event as the flora of this region have been thoroughly investigated. Gastrodia takeshimensiswas a particularly special discovery because it is both completely mycoheterotrophic and completely cleistogamous. It was really a happy moment. 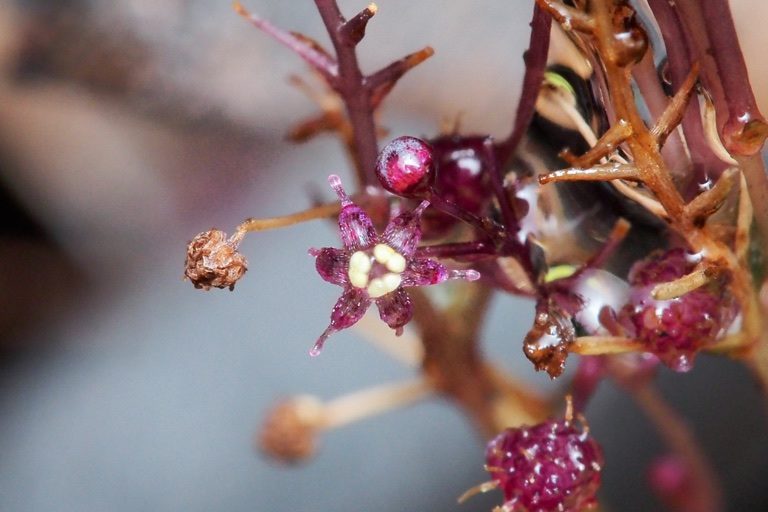 What are some challenges of studying this group of plants?

The rarity and ephemeral status of the plants are challenging.

What do you think about the conservation status of the mycoheterophic plants you’re documenting? Are some of them rare and in need of protection?

Given that mycoheterotrophic plants are highly dependent on the activities of both the fungi and the trees that sustain them, they are particularly sensitive to environmental destruction. Therefore, many of them are endangered and in need of protection The genus Oxygyne, which includes species like O. yamashitae, for example, has one of the rarest plants in the world.

In fact, it has been suggested that the species richness of these mycoheterotrophs provides a useful indicator of the overall floral diversity of forest habitats. A detailed record of the distribution of these vulnerable plants thus provides crucial data for the conservation of forests.