New research shows domestic dogs have contributed to the extinction of at least 11 species.

Humans and their canine companions share many close bonds. Wolves (Canis lupus) were the first animal domesticated by people, some time between 15,000 and 50,000 years ago.

There are now an estimated 1 billion domestic dogs across their near-global distribution.

Domestic dogs include feral and free-ranging animals (such as village and camp dogs), as well as those that are owned by and completely dependent on humans (pet dogs).

Our latest research reveals that the ecological “pawprint” of domestic dogs is much greater than previously realised.

Using the IUCN Red List of Threatened Species, we counted how many species are negatively affected by dogs, assessed the prevalence of different types of impacts, and identified regions with the greatest number of affected species. 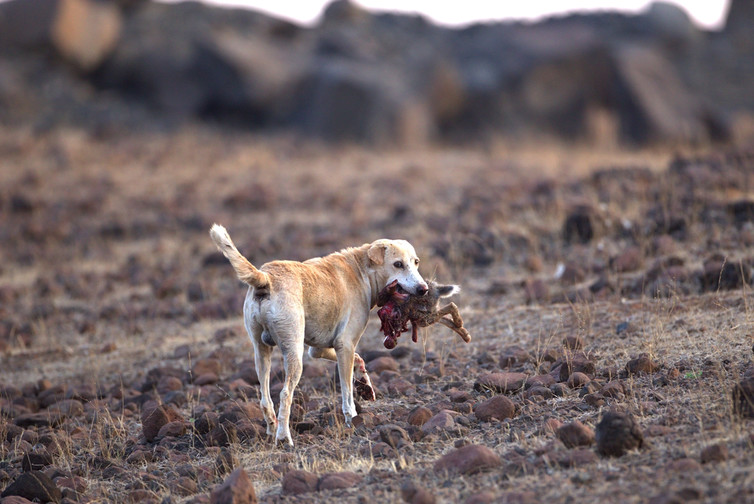 We found that dogs are implicated in the extinction of at least 11 species, including the Hawaiian rail and the Tonga ground skink. Dogs are also a known or potential threat to 188 threatened species worldwide: 96 mammal, 78 bird, 22 reptile and three amphibian species. This includes 30 critically endangered species, two of which are classed as “possibly extinct”.

These numbers place dogs in the number three spot after cats and rodents as the world’s most damaging invasive mammalian predators.

Even though dogs have an almost global distribution, the threatened species they are known to affect are concentrated in certain parts of the globe. Southeast Asia, South America, Central America and the Caribbean each contain 28 to 30 threatened species impacted by dogs. Other hotspots include Australia, Micro/Mela/Polynesia and the remainder of Asia.

Predation was the most commonly reported impact of dogs on wildlife. The typically omnivorous diet of dogs means they have strong potential to affect a diversity of species. For instance, dogs killed at least 19 endangered Kagu (a ground-dwelling bird) in New Caledonia in 14 weeks. Threatened species with small population sizes are particularly vulnerable to such intense bouts of predation.

Aside from simply killing animals, dogs can harm wildlife in other ways, such as by spreading disease, interbreeding with other canids, competing for resources such as food or shelter and causing disturbances by chasing or harassment. For example, contact with domestic dogs increases disease risk for endangered African wild dogs in Kenya.

Part of the problem is that when wild animals perceive dogs as a threat, they may change their behaviour to avoid them. One study near Sydney found that dog walking in parklands and national parks reduced the abundance and species richness of birds, even when dogs were restrained.

None of the Red List assessments mentioned such indirect risk effects, which suggests that their frequency is likely to be much higher than reported.

Despite their widespread and sometimes severe impacts on biodiversity, dogs can also benefit some species and ecosystems.

For example, in Australia, the closely related dingo (Canis dingo) can suppress populations of introduced predators such as red foxes (Vulpes vulpes), and in doing so can benefit smaller native prey. It is possible that domestic dogs could perform similar ecological roles in some situations.

In some regions, dogs and their keen noses have been trained to help scientists find threatened species such as Tiger quolls. Elsewhere they are helping to flush out and control feral cats.

An emerging and exciting conservation role for dogs is their growing use as “guardian animals” for wildlife, with the remarkable story of Oddball being the most well known.

Dogs not only interact with wildlife, but can also attack and spread disease to humans, livestock and other domestic animals. As such, managing the problem requires looking at ecological, cultural and social perspectives.

Some of the regions with high numbers of species threatened by dogs are also hotspots for urbanisation and road building, which make it easier for dogs to access the habitats of threatened species. Urban development increases food waste, which feeds higher numbers of dogs. As dogs expand into new areas, the number of species they impact is likely to grow.

We can protect wildlife by integrating human health and animal welfare objectives into dog management. Vaccination and desexing campaigns can reduce disease risk and overpopulation problems. We should also focus on responsible dog ownership, removing dogs without owners, and reducing access to food waste.

Given the close relationship between humans and dogs, community engagement should form the basis of any management programme. More research is needed to get a better picture of the scale of the problem, and of how dogs interact with other threats such as habitat loss. Such actions are critically important for ensuring the conservation of wildlife threatened by dogs around the world.

This article was co-authored by Dr Al Glen from Landcare Research, New Zealand and Dr Abi Vanak from the Ashoka Trust for Research in Ecology and the Environment, India. These institutions had no role in the design or funding of this research.