The Chinese-backed Pak Beng dam in Laos was supposed to be the third dam under construction on the lower Mekong, out of a total of 11 hydropower projects mapped out.

A major energy review by Thailand has delayed the launch of a controversial dam on the Mekong. This could lead to further questions about future hydropower projects along the river.

The Chinese-backed Pak Beng dam in Laos was supposed to be the third dam under construction on the lower Mekong, out of a total of 11 hydropower projects mapped out. Then earlier this year, Thailand’s Electricity Commission (EGAT ) deferred a decision on signing the power purchase agreement for the Pak Beng dam until the country’s energy development plan was completed. EGAT had originally agreed to buy 90% of the electricity from the dam.

Brian Eyler, director of the Stimson Center’s Southeast Asia programme, said that, “the prospects for the Pak Beng dam to move ahead as originally planned are unlikely given EGAT’s adjustments to a renewable energy transition.”

While the Chinese dam-builder Datang Overseas Investment appears likely to lose its Thai partner EGAT, pressure is coming from a very different quarter. Far removed from the world of energy executives in Bangkok, the protest movement of Rak Chiang Khong, a Mekong conservation movement, and their grassroots campaign based in northern Thailand, has also contributed to the dam’s delay and growing uncertainty for investors.

Regional NGOs have directed strong criticism at the poor quality of Pak Beng project’s environment impact assessment (EIA) and complained that there has been insufficient assessment of the impact of changes to water flow and fish migration on communities in Thailand. Niwat Roykaew, chairman of Rak Chiang Khong, told the thethirdpole.net, “We have proposed that Thai academics research hydropower impacts on the Thai side of the river, and Datang company has agreed to this. Now they are thinking twice about the dam.” 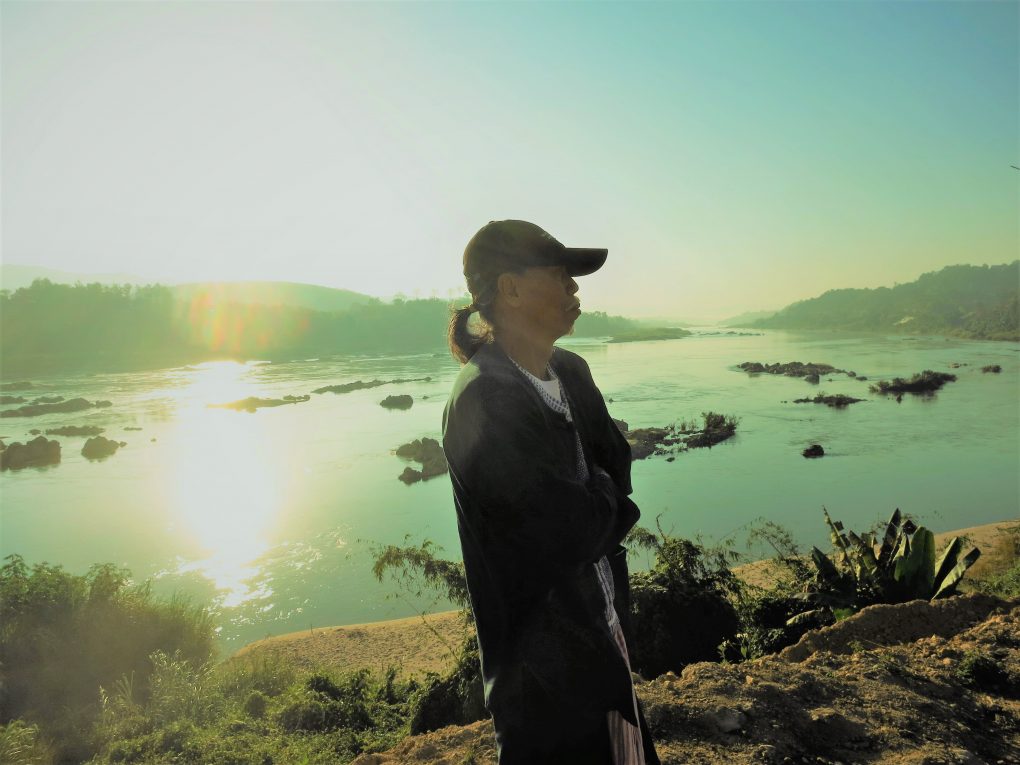 Last year Niwat Roykaew and other Mekong residents filed a court case against the Thai Water Resources Department and the Thai National Mekong Committee, arguing they should have studied the impacts of the project on Thailand before supporting the dam. The case is still before Thailand’s administrative court.

In northern Thailand, the Mekong flows between Laos and Thailand creating an international border along a stretch of over 850 kilometres making it Southeast Asia’s longest river. The Pak Beng dam-site is located less than 130 kilometres from the Thai border.

Dams upstream in China have already caused sudden changes in water levels and floods, which disrupt the natural cycles of the river resulting crop failure and a sharp decline in fisheries, according to the villagers in the eight Thai provinces on the Mekong.

Recent scientific reports have exposed the extent of damage already done to the Mekong. The dams built upstream in China, along with other large scale infrastructure development on the river, are responsible for trapping nutrient-rich sediment and preventing its natural flow downstream according to a 2017 report by UNESCO and the Stockholm Environment Institute. According to the study, the average sediment load in the Mekong at Chiang Saen in Thailand declined by 83% between 2003-2009. The depletion of sediment in recent years has been much faster and larger than the researchers had expected.

The loss in sediment has caused a decline in agriculture fisheries and the overall health of the river. Bitter complaints have been voiced by communities all the way down from the river to the area’s worst affected zones in the delta of Vietnam.

Chinese scholar Xuezhong Yu conceded that dams may have negative environmental impacts but, “they will not kill the Mekong river if they are designed to reduce adverse environmental consequences,” he wrote in a blog for the CGIAR Research Program on Water, Land and Ecosystems. He claimed that fish ladder mitigation technology will solve the problem. But Jianhua Meng, a World Health Organisation hydropower consultant and engineer, argued that there is no scientific evidence that mitigation technology drawn from western countries can be transferred to tropical rivers with their vastly greater fish biodiversity.

The Datang dialogue in Thailand

Hydropower companies and Laotian government officials are not in the habit of sitting down opposite their anti-dam opponents and local community leaders in a peaceful setting around a long wooden conference table. But in Janaury 2018, the Chinese investor Datang Hydropower (Lao) initiated a dialogue with Lao government officials and Thai civil society at the site of the Rak Chiang Khong Mekong School, a riverside research and education centre. This is just a 15 minute boat ride away from the Laotian border town of Ban Hay Xai, best known as the starting point for travel by small passenger boats to the ancient royal capital of Luang Prabang. 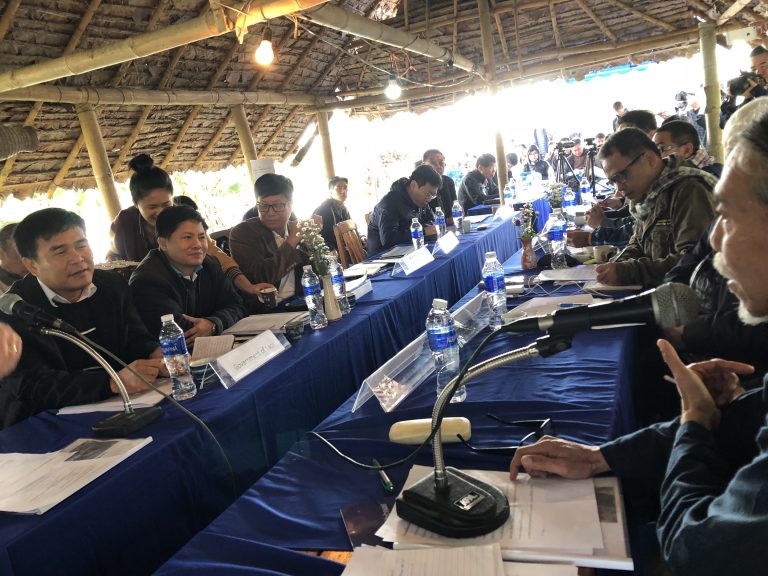 The Lao government’s Jansawaeng Bunnong, the deputy director-general of the Laos Energy Policy, arrived from Laos with the Datang delegation.“This project will benefit both Laos and Thailand, as 90% of the power will be sold to Thailand and benefit Thai industrial growth, while this project will also improve the quality of life for Lao people around the dam site,” Bunnongs was reported to have said, according to the Thai newspaper, The Nation. However, Thai counterparts in the ministry of energy in Bangkok have not decided yet whether they will buy any electricity from Pak Beng, given Thailand’s current 33% energy surplus.

As a result of the dialogue, Datang agreed to let the Rak Chiang Khong Mekong Conservation group participate in a survey on the transboundary impacts of the dam on Thailand.

Locals are not convinced.  Thongsuk Inthawong, the community leader of Ban Huai Leuk in Chiang Rai’s Wiang Kaen district voiced his fears, “I do not believe their claims that this dam will have low impacts on the people of Thailand and the river, because they only presented models to mitigate the dam’s impacts, which do not match with reality,” said Inthawong whose village is close to the dam-site.

Inthawong’s suspicions are backed by strong scientific support from the study of impacts of the mainstream Mekong hydropower dams – commissioned by the inter-state Mekong River Commission (MRC) and known as the Council Study – released in January 2018. This study found that hydropower development will increase poverty and aggravate food insecurity in the region.

During the third MRC International Conference in Cambodia’s Siem Reap in April 2018, environmental researchers warned that hydropower dam development in the Mekong River would reduce fisheries by up to 70% across the Mekong basin. Only the Vietnamese government paid serious attention, urging other member states to take action based on the MRC study.

Pianporn Deetes, the Thai national organiser of the US-based NGO International Rivers, lamented in an interview with the Mekong Eye, “As a native of the basin, I’m deeply saddened that these leaders are incapable of seeing the whole river, they simply want to divide it into sections which they can exploit. We are watching this social and ecological disaster unfold before our eyes.”

Charting a new course on the Mekong

The current path of unregulated damming and damage to one of the world’s most important eco-systems is being challenged by a convergence of factors.

Thailand’s energy review could upset assumptions that construction of the 11 Lower Mekong dams is inevitable.

Witoon Permpongsacharoen, the director of the Mekong Energy and Ecology Network (MEE Net) in Bangkok, has documented Thailand’s exaggerated energy demand, which is being addressed by the current energy review. “I think this changing trend will affect the regional energy scene. I cannot say that EGAT will stop Pak Beng, but I will say that Thailand’s energy demand will no longer be the major driver of dam-building in Laos,” Witoon said.

Another dam down in Cambodia?

The Pak Beng dam now appears to be a distinctly wobbly domino. Downstream in Cambodia the huge Sambor dam project, revived in 2016 by Phnom Penh, has just been the subject of a landmark study which turns the project into another potential domino to fall.

The report carried out by the National Heritage Institute based in US concluded that the dam could “literally kill the river”. “The Sambor reach is the worst possible place to build a major dam,” the report states. In place of a new dam, the study recommends integrating floating solar photovoltaic panels into the already operational Lower Sesan 2 dam and operating the reservoir as a single integrated hybrid facility.

Not only would this green energy solution save the fisheries of the Mekong but, according to this landmark report, “solar energy is the only option with a positive net economic benefit after all costs and benefits are taken into account, and the cost of solar would be cheaper than the best possible mitigated dam ”.

Vietnam is deeply worried that further dams will block more sediment from reaching the delta. Duong Van Ni, the director of Vietnam’s Hoa An Biodiversity Research Centre at Can Tho University expressed his deep concern, “There is an urgent need for regional governments to press the pause button on further dams on the Mekong mainstream, to take stock of projects already under construction, and to consider the dangerous approach being taken towards development on the lower Mekong mainstream.”

If Thailand cancels the power purchase for the Pak Beng dam, Eyler sees it as the good opportunity to operate that “pause button”. “It could create a pathway to a more sustainable water-energy blueprint for the region… one with fewer dams,” he said.

This article originally appeared on Thirdpole.net