Syria Set to Join Paris Climate Accord, Leaving US As Only Opponent

Syria and Nicaragua were the only two nations outside the 195-nation pact when it was agreed in 2015. Nicaragua signed up last month. 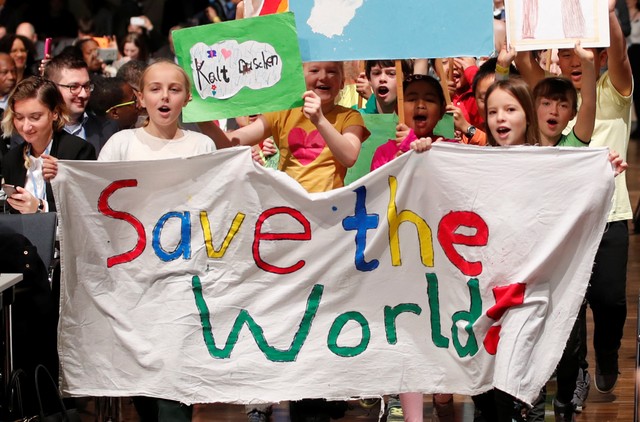 Children are seen during climate march prior to the opening session of the COP23 UN Climate Change Conference 2017, hosted by Fiji but held in Bonn, in World Conference Center Bonn, Germany, November 6, 2017. Credit: Reuters/Wolfgang Rattay

Bonn, Germany: Syria said on Tuesday that it intends to join the 2015 Paris agreement for slowing climate change, isolating the US as the only country opposed to the pact.

Syria, racked by civil war, and Nicaragua were the only two nations outside the 195-nation pact when it was agreed in 2015. Nicaragua’s left-wing government, which originally denounced the plan as too weak, signed up last month.

“I would like to affirm the Syrian Arab Republic’s commitment to the Paris climate change accord,” deputy environment minister Wadah Katmawi told a meeting of almost 200 nations at November 6-17 climate talks in Bonn, Germany.

Membership for Syria under President Bashar al-Assad would isolate the US, the world’s biggest economy and second largest greenhouse gas emitter behind China, as the only nation opposed to the accord.

US President Donald Trump, who has expressed doubts that man-made greenhouse gas emissions are the prime cause of global warming, announced in June that he intended to pull out and instead promote US coal and oil industries.

The United Nations welcomed Syria‘s statement as a declaration of intent to adhere to the Paris pact. But it said Damascus had not yet filed any of the official documents to sign up.

Sarah Baashan, a Saudi diplomat chairing the meeting at which Syria spoke, told the session that she welcomed the “good news”. There was no applause, however, at a conference where Assad’s government has few allies.

“Syria‘s decision shows the breadth of support for the Paris agreement,” Alden Meyer, of the Union of Concerned Scientists, told Reuters.

Washington still has a seat at the table in Bonn because the rules mean a formal pullout can only take effect in 2020. Many delegates said they hoped Trump would reconsider.

David Waskow, of the World Resources Institute think-tank, noted that Trump’s climate views had previously isolated him from other leading economies in the Group of Seven and the Group of 20.

“Now he’ll be isolated from all nations,” he said.

Trump has said he will pull out of the Paris agreement unless Washington can secure more favourable terms for American businesses and taxpayers.

But he has been vague about what that means, especially since the pact gives all nations power to set their own goals.

Overall, the Paris agreement seeks to limit a rise in temperatures to “well below” two degrees Celsius (3.6 Fahrenheit) above pre-industrial times, ideally 1.5.

The UN’s weather agency said on Monday that this year is on track to be the second or third warmest since records began in the 19th century, behind a record-breaking 2016, and about 1.1 Celsius (2F) above pre-industrial times.

The Bonn meeting is seeking to write a detailed “rule book” for the Paris agreement, including details of how to report and check all nations’ greenhouse gas emissions.