Doctors and activists found a higher than normal incidence of tuberculosis, mental illnesses and arthritis-like joint pains, even among people below the age of 30.

The production of tendu leaves in Raigarh has fallen drastically due to coal mining, according to a farmer in the district. Credit: indiawaterportal/Flickr, CC BY-NC-SA 2.0 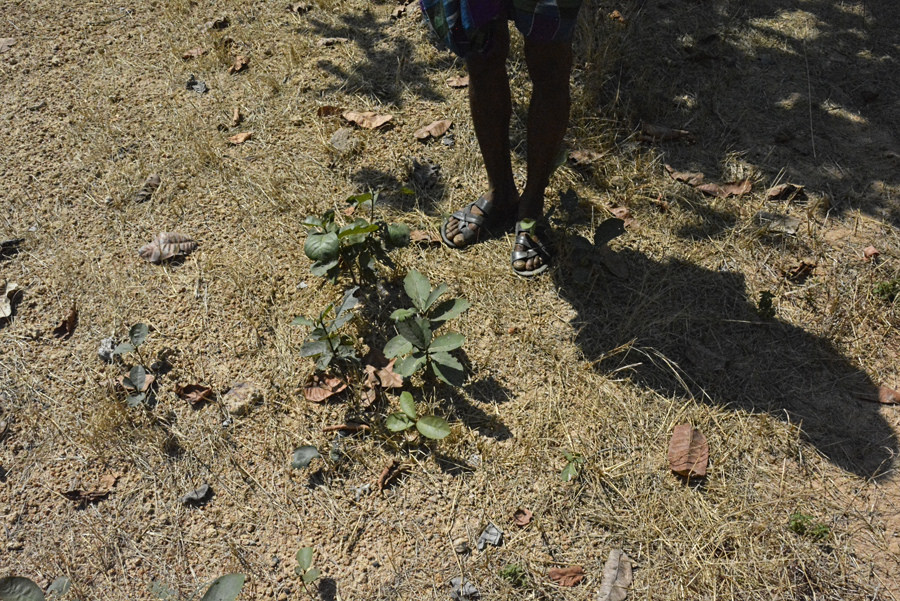 The production of tendu leaves in Raigarh has fallen drastically due to coal mining, according to a farmer in the district. Credit: indiawaterportal/Flickr, CC BY-NC-SA 2.0

Tired, ghoulish bodies moving around in a field of ash casting a blanket of sameness against vast, black mines, broken now and then by the bright yellow of scorching fires – this is what a coal mine looks like. Lighting up the nation comes at a steep price for communities living near these mines and the coal-fired power plants that generate electricity. Aside from having their air severely polluted,, these people also suffer from hair loss, allergies, arthritis and mental illnesses, according to a new study that surveyed households in several villages near coal mines and plants in Chhattisgarh.

The ill effects of coal mining are not unknown. A 2013 report used air pollution data near about a 100 coal plants across the nation, representing a total power capacity of about 120 GW, and estimated that these installations were responsible for the deaths of about 100,000 people in 2011 alone, as well as more than 20 million asthma cases.

Coal mines are notorious for polluting everything around them. The Jharia mines in Jharkhand are a poster child for the terrible impacts this source of energy has on a country’s people and environment. Although this mine is the most productive and possesses better than average quality of coal compared to other mines in India, the resulting pollution has devastated the region. Fires have also been burning continuously in the mines for almost a century, scorching the earth and releasing carcinogenic gases into the atmosphere. Respiratory diseases have added to the death toll of accidents in the mines. The mines’ run-offs and coal washings have muddied the Damodar river.

The region stretching from Raniganj in West Bengal, to most of Jharkhand and into northern Chhattisgarh, together with parts of eastern Maharashtra, has the country’s largest coal reserves. It supports numerous mines and thermal power plants, allowing India to be one of the top five coal-producing countries in the world. On the flip side, the communities living near the mines and power plants are among the most devastated in turn.

Raigarh in Chhattisgarh has been home to several plants and coal mines, all but one of which are privately operated, for almost two decades. The people in the surrounding villages have been living here for much longer than that, farming and raising livestock. Since the mines and plants were set up, they have lost agricultural land and the surrounding forests, which had been another source of sustenance for the villagers. They have been organising protests and writing numerous letters to officials, all falling on deaf ears.

“The [2013] study came through a community demand,” says Rinchin, an environmentalist and one of the authors. “One was to highlight what is happening” and another another to highlight the fact that not enough attention was being paid to the people’s problems. In 2013-2014, people from Sarasmal and Kosampalli villages monitored the air pollution with the help of some NGOs and were startled by their findings. Water levels in the rivers and ponds had fallen; they found that fly ash was forming a layer on everything it could land on, from treetops to rooftops. So there was a need to document what the villagers were seeing using scientific methods, according to Rinchin.

Long-term residents of Sarasmal, Kosampalli and Dongamouha in Raigarh – 515 people (including children) – were asked about their respiratory, musculoskeletal, neurological and gastrointestinal conditions. The cohort excluded miners, plant workers and migrants. About 200 attended a medical check-up by doctors to evaluate their complaints further. All these people lived within 2 km of the mines and plants.

Soil, air and water samples were obtained and analysed from these villages. Most villagers depend on underground water sources such as tube wells and borewells for drinking water, and ponds and streams for bathing, washing and for animals.

However, an independent source, speaking on condition of anonymity, said coal mining does not always produce heavy metals: “These minerals can only be spread by mining if they were already first present in the soil” (paraphrased for clarity).

Many of these metals are either suspected or known to be carcinogens and contribute to a host of other illnesses like high blood-pressure, kidney damage, chronic respiratory issues and mental illnesses.

This was borne out by the health survey. Only a little more than 10% of those surveyed didn’t report any issues, regardless of how well-off they were or weren’t. The remaining 89%+ complained of several health problems, with family members showing similar symptoms. Dry cough, breathing difficulties, heavy hair loss and itchy eyes were common. Skin issues like discolouration, deeply chapped feet (even in young children), itchy skin and rashes were very common. Women experienced chronic complaints more than men. Several people reported that they had also developed these various symptoms within a year of each other.

“We have [also] found a couple of things we initially did not expect,” says Manan Ganguli, a medical doctor who was part of the study. A large proportion complained of joint pains and arthritis-like symptoms. Remarkably, people younger than 30 years, about one third of the surveyed population, reported these symptoms. This is worrying because such afflictions generally only show up in old age in healthy populations.

Another such striking result was the prevalence of mental illnesses. About 12% reported depression and anxiety, confirmed by a psychiatrist on the team. Ganguli says this proportion is more than what one would see on average in a population and is something that requires further investigation.

The bad news doesn’t end there. In Sarasmal, there were 12 tuberculosis cases among 341 villagers surveyed. Ganguli is not sure if there is a link between TB and the pollution. “We looked into it but it requires further” study, according to him – though that didn’t prevent him from speculating. There has been some evidence linking TB and air pollution. It’s possible that, given the various ailments prevalent in the area, the villagers’ immunity has been compromised, leaving them more susceptible to TB, he said.

Every step of the power-production process – mining, washing, transport and burning – hurts the people who make it possible. The Raigarh survey has only shown that these also include people living in the vicinity of these activities. Their suffering subsidises the privilege of those who consume that power. Rinchin says that, in all the government clearances required to commence mining and firing, there is an environmental component but never a health component.

A different official, who also wished to remain unnamed, remained optimistic and said, “Coal mining nowadays is absolutely safe if done scientifically.” For example, the fly ash can be used for making bricks or refilling the mine instead of dumping it as topsoil – but this should be done in a way that does not pollute groundwater. Modern thermal power plants also use other technologies that prevent the release of smoke and are considered environmentally safe.

Rinchin isn’t convinced. There needs to be an alternative even if you can say mines and power plants can be operated safely, she says. In other words, we need to rethink how much energy we need and what the alternatives to coal are.

While many countries have been trying to phase coal out, India has been commissioning more mines and more thermal power plants. At the same time, the Centre hasn’t been doing much to mitigate the health hazards either. They need to come down strictly on companies that violate environmental laws and make it more difficult to get clearances.