Sunderlal Bahuguna Blew the Bugle. Will We Heed It and Save Ourselves?

The author remembers a chance meeting in August 2010 with the Gandhian environmentalist alongside the Ganga. 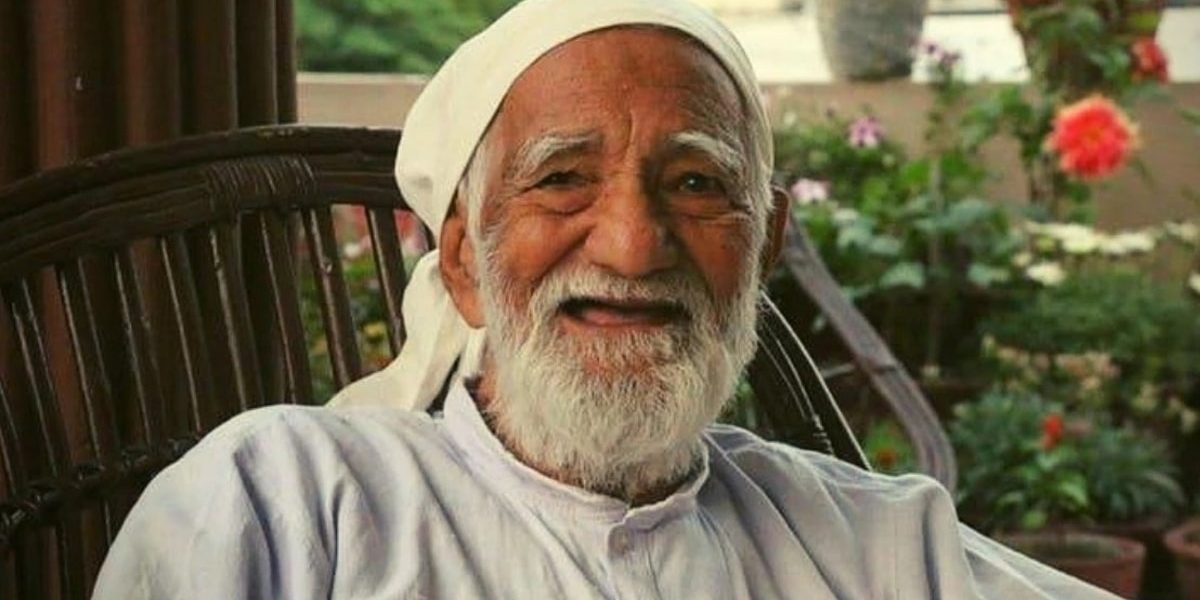 On May 21, 2021, I found out through a social media post that Sunderlal Bahunguna had passed away in Rishikesh. He had tested positive for COVID-19 three days earlier. I had only recently thought of him when multiple dead bodies were found floating on the Ganga, the river for whose preservation Bahuguna had dedicated his lifelong activism.

I thought of his forlorn eyes that held the Ganga in them, as I had witnessed up close one evening more than a decade ago.

It was August 1, 2010, and I was in Rishikesh, living at the Parmarth Ashram. I had made the choice to be away from the touristy humdrum of the town but I didn’t know that ashrams in Rishikesh attracted more tourists than the hotels. Yet there’s something nice about having to follow a discipline regarding your meals and the closing time of the ashram’s gates. Mumbai never imposes such a routine on you. It imposes other things though.

Another thing about Parmarth Ashram that I did settle comfortably into was the evening Ganga aarti, the daily ritual of worship of the river Ganges at the ghat, which belongs to the ashram itself. I never missed a chance to attend the aarti while I was there.

It’s not something religious that drew me there evening after evening. It was the energy – the music, the water, the evening sky and people moving in unison, as a homogenous mass just as at a rock concert. Whether most of them understood the words of the aarti, they definitely got the mood and the mood got them as well.

That evening, I had rushed to the ghat. The afternoon rain had delayed me. As I entered, I located an isolated corner amid the crowd of devotees and tourists and leaned against one of the pillars to catch my breath – it louder than the sound of bhajan reaching my ears.

Slowly, as my breath started to match the slow pace of the music coming from the harmonium and the tabla, I noticed a lone figure standing tall while others were sitting or were in the process of finding a seat. He was wearing a white bandana on his head that matched his long white beard that hung below his chin, like glacial ice from a mountain. His kurta-pyjama was white too.

He was standing absolutely still and I think it was this fact that made me recognise him more than anything else, for in the past I had seen him only in some photographs published in newspapers or magazines.

Sunderlal Bahuguna (born 1927 in Tehri region, Garhwal) is a noted environmentalist. He participated in the Chipko movement and fought the Gandhian way against the construction of Tehri dam.

I got a jolt of excitement on seeing him in person. I pulled myself closer to one of the managerial staff members of Parmarth Ashram.

“That’s him. He’s staying at the ashram. Have you had a chance to meet him?” he asked me with a smile. I shook my head in the negative. He ushered me forward. Closer to the steps of the ghat. Close to the Ganga. I found some space close to the river. To my left, not very far from where I was sitting, Bahuguna took his seat too.

The monsoon sky that evening exploded into beautiful purple and pink as opposed to the grey of the previous day, caused by incessant rain. Mesmerised by so much colour, I let my eyes roam and soak in the visual of the sky like two pieces of foam while my ears sunk deeper into the music of the aarti. I lost myself. The mood got me.

After the aarti, I looked for the same staff member hoping that he would introduce me to Bahuguna. But he was nowhere to be seen. I collected my slippers from the joota-ghar and walked back into the ashram. I did not find the man I was looking for, but I found Bahuguna sitting on one of the benches in the courtyard of Parmarth Ashram with his wife, Vimla.

I stopped, and stepped up hesitantly and asked, “Are you Sunderlalji Bahuguna?”

“What’s your introduction?” he asked politely.

“I’m a filmmaker and writer from Mumbai.”

He offered me a seat. I sat next to him, shrinking into myself. He asked me the purpose of my visit to the ‘region’. I replied that I had just returned from Joshimath after a trek.

“Did you see the dams on your way?”

“All throughout,” I said. I had seen a few under construction, the largest of which was the one coming up between Srinagar and Rudraprayag on the Alaknanda river. At Devprayag, the Alaknanda joins the Bhagirathi and together they become the Ganga.

“Ganga has a natural way of purifying itself in the mountains. The dams are killing that process,” Bahuguna said. 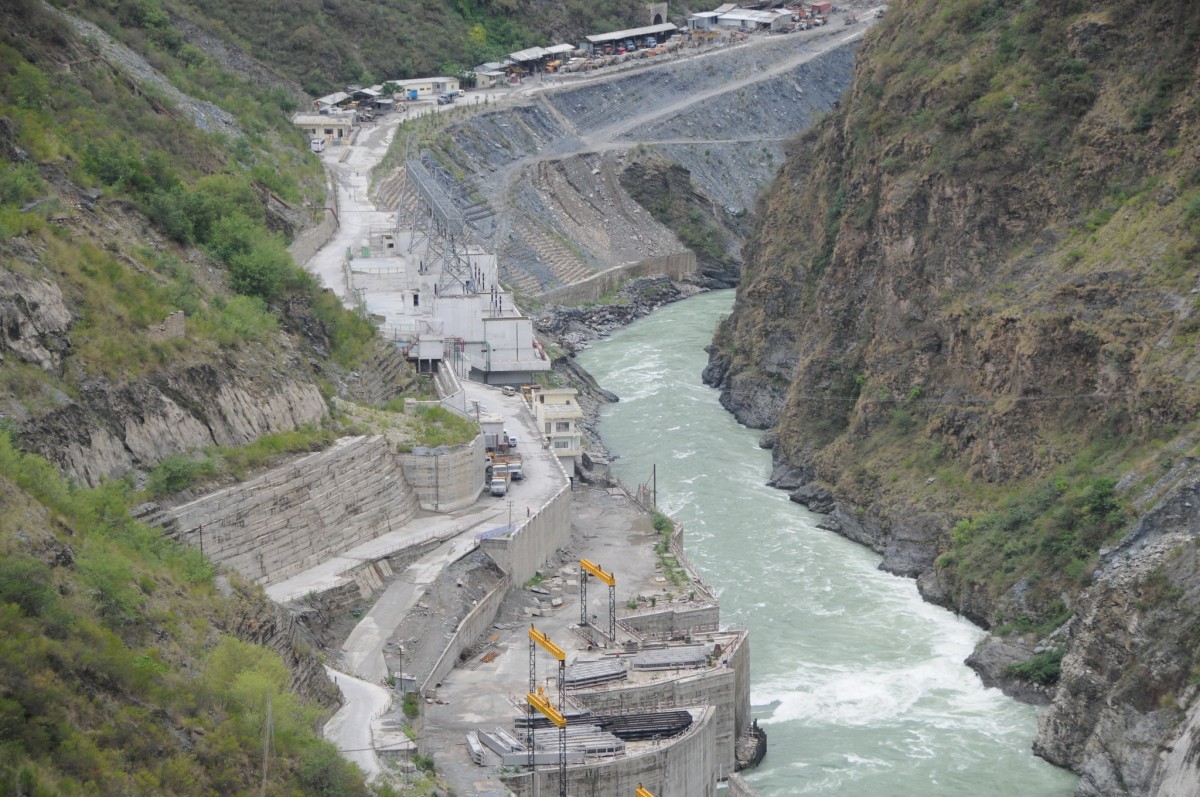 The Bhagirathi river flows past the Tehri dam. Photo: sharadaprasad/Flickr, CC BY 2.0

His lament reminded me of a similar one I had experienced a few days prior. While I was trekking in the jungles above the village of Lata, somewhere between 1,500 and 4,000 meters above sea level – on paper a protected forest zone – I was feeling happy to be visiting such a haven.

Then a sudden burst of sound shattered the peace. I asked my guide if that was lightning or a distant cloud burst, as it was the season when the monsoon peaks and heavy rains had been forecast. “It was a dynamite blast,” my guide told me.

The road that we had left below at Lata is known as a border road, and if one travels for another couple of hours on it, instead of getting off at Lata, one would reach Niti Pass, India’s border with Tibet.

The road on the Indian side of the border is not much of a road. But across the Niti Pass exists a fantastic road that the Chinese have built. Once the Indians saw the ‘Made in China’ road, they panicked. They were reminded of 1962, when the Chinese attack had caught India unaware and unprepared.

In their panic, the Indian authorities somehow hauled a Maruti Gypsy all the way to Niti Pass and parked it there: they were bluffing that even India had a motorable path right up the pass. But before China called India’s bluff, India needed a real road. Hence the dynamite blasts were blowing out the mountains standing in the way. Not one blast but several in a day.

Bahuguna gave a sad nod to my story. He must have heard it already. And then he said to me what he must have been saying for years, because that is the very thing that he had been fighting against.

“In the name of development, we are destroying the Himalaya.”

Bahuguna happened to be in Rishikesh that evening because he was traveling to Dehradun to attend a meeting the following day. The agenda was to protest a dam proposed at Gangotri, close to the Gaumukh glacier, the source of the Bhagirathi river.

Deep within, Bahuguna knew that he would probably lose this battle to the winds of development, just like he had lost the battle against the dam at Tehri – a battle he had fought for 14 years, from 1980 to 2004, through repeated hunger strikes. He had to be evacuated forcefully when the reservoir started filling with water.

This time, his plan was to urge the authorities to not build the dam close to the glacier but move it further south of Gangotri. Instead of fighting for outright preservation of the Himalaya, he was willing to settle for the dam of least destruction, the one that postponed doom by a few years.

The Himalaya span from Pakistan to India, up into Tibet and China and further westward into Nepal and Bhutan. Bhutan of all these nations is the one that respects its mountains the most. Mountaineers are not allowed to summit peaks that lie in Bhutan as the Bhutanese think of them as gods. When you set your foot on a mountain peak in Bhutan, you commit sacrilege.

Religion or otherwise, mountains are sacred because they are the generators of such ecosystems that breed and preserve life down in the plains.

I am sure activists like Bahuguna exist in all these Himalayan nations. And there must have been protests too when China tested its first nuclear bomb at Lop Nor Lake in 1964. After 45 or more such tests, climate change and exploitation for water, the lake disappeared and a desert emerged in its wake.

The lake was one of its kind – first discovered by Marco Polo, it had earned the title of ‘The Wandering Lake’ as it shifted its position every year, depending on the inflow of the Tarim river that emptied into it.

But there was applause too. The first nuclear test at Lop Nor gave China the important tag of being a nuclear state, that too during the Cold War, when nations were being bullied just by the thought of the US or the USSR bombing them back into the stone age. The People’s Republic of China had become a proud nation. 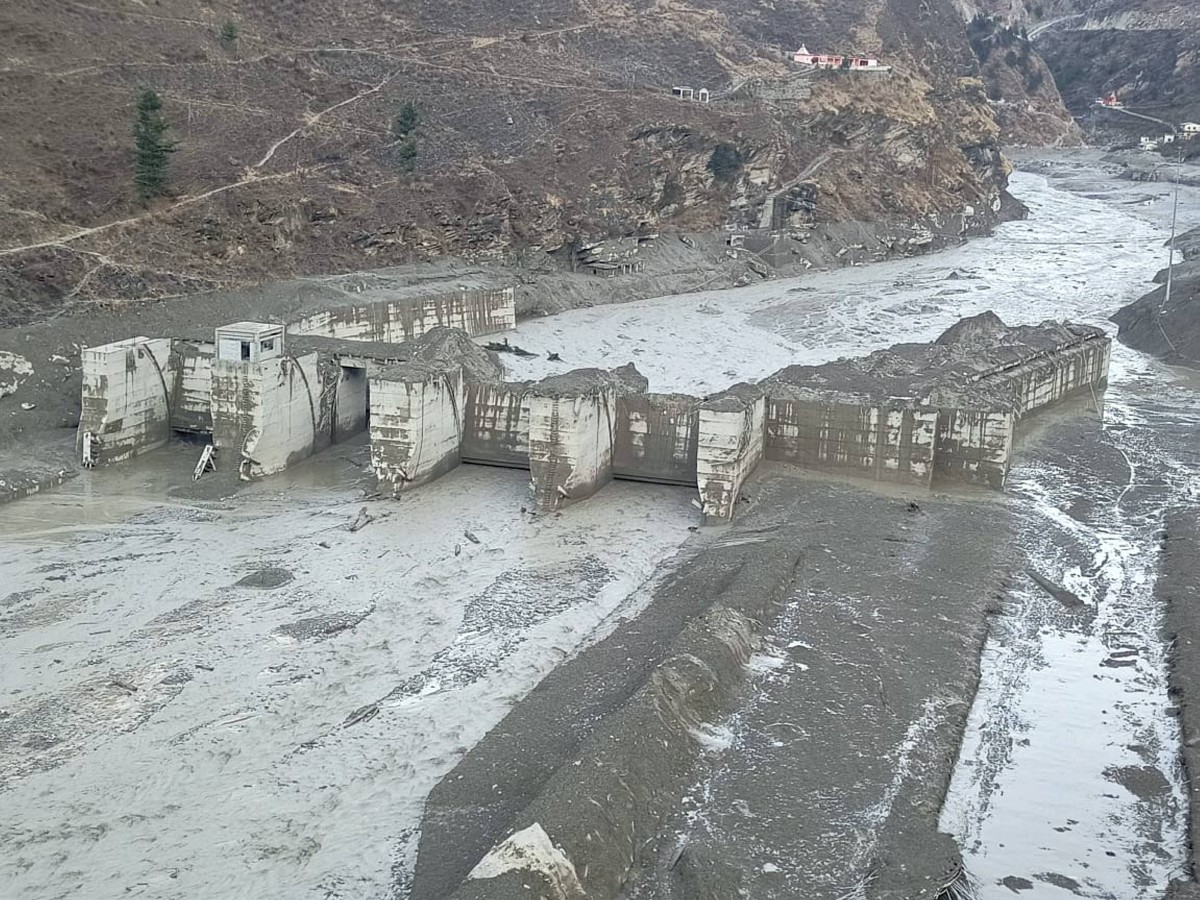 Damaged Dhauliganga hydropower project after a glacier broke off in Joshimath causing a massive flood in the Dhauli Ganga river, in Chamoli district of Uttarakhand, Sunday, Feb. 7, 2021. Photo: PTI

The dilemma that lies in front of these Himalayan nations is whether to allow these mountains to be blasted to rubble, to let their lakes and rivers perish in the name of national security and development – or to stand up in defense. These are natural and ecological wonders that have thus far been seen only as tourist or pilgrim spots or as mountaineering destinations.

As my conversation continued with Sunderlal Bahuguna, his wife Vimla said I should excuse them now. She wanted her husband to have some rest before the long meeting that awaited them in Dehradun the next morning.

I stood up from the bench and asked him: “Is there anything you would like to suggest that I or people like me should do, not that we can do as much as you have done, but still whatever little we can do in our limited capacity?”

“I have done nothing,” he said. “I have just blown the bugle and announced that danger lies on this path. Now it’s up to you people to save yourselves from peril.”

Atul Sabharwal is a filmmaker.