In a December 2015 order, the National Green Tribunal had called for a curb on straw burning, and had recommended that satellite-based monitoring mechanisms be adopted and local government officers engaged to take action against stubble burning. 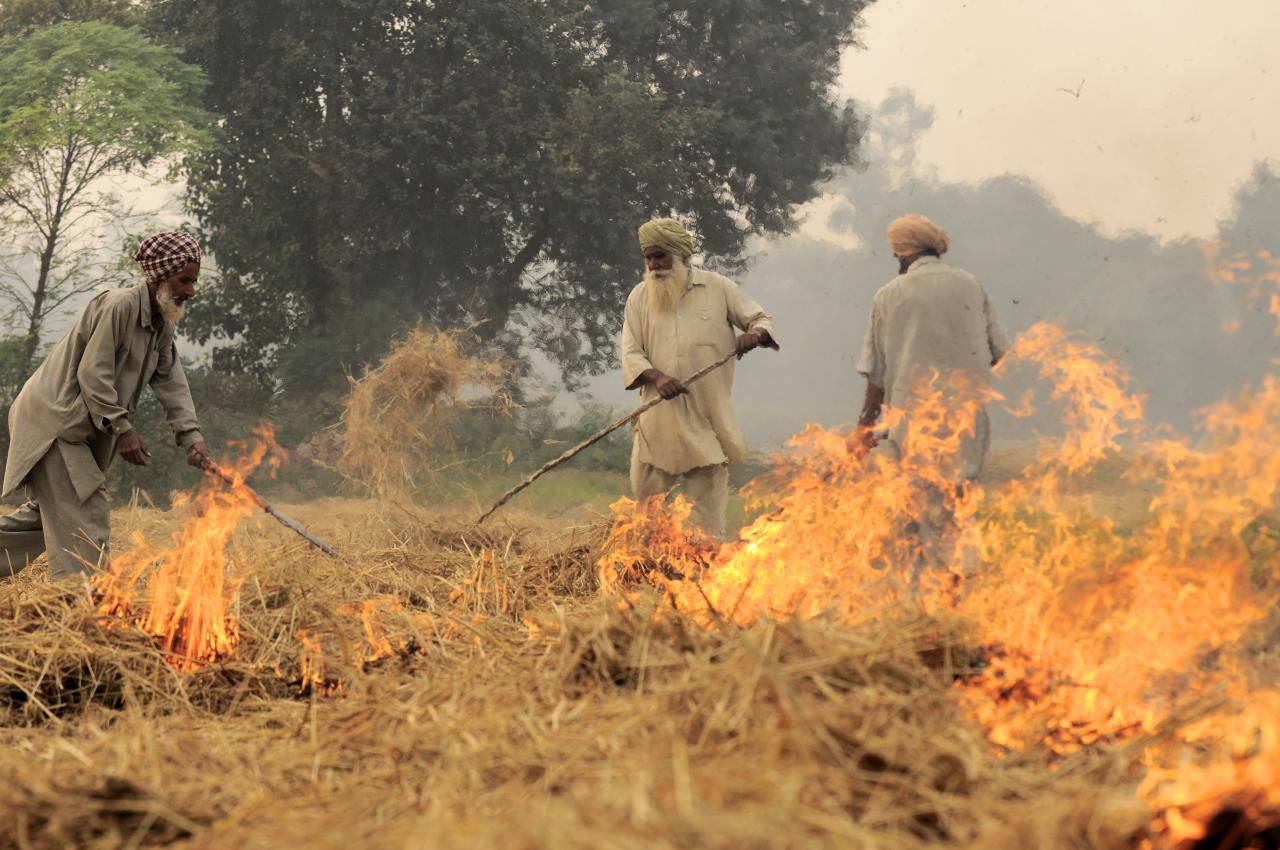 The Delhi government was castigated by the National Green Tribunal (NGT) on Thursday after its counsel claimed before the panel that dengue cases have declined because mosquito breeding has stopped as a consequence of rising air pollution. The NGT chairperson, Swatanter Kumar, subsequently directed the Delhi chief secretary to file a status report. However, this may have a limited impact as the primary reason for high air pollution over the past week has been the cumulative effect of vehicular pollution, smoke from crackers burst during Diwali, garbage burning and straw burning in the fields, regarding which the NGT had issued a detailed order in December 2015.

Since the petitioner, scientist Mahendra Pandey, had claimed through his advocate Gaurav Kumar Bansal that the Delhi government was not doing enough to curb air pollution, the panel directed it to convene an urgent meeting. Subsequently, the chief minister appointed a ministerial task force to combat air pollution on Thursday, which reviewed the air quality and appealed to the central government to take all possible steps to immediately stop crop residue burning in the neighbouring states.

At the meeting, the scientists advised the Delhi government to call for a unified action plan for the entire national capital region to ensure the success of the anti-pollution drive.

While the chief secretary is due to submit his reply on Friday, this would put the ball firmly back in the NGT’s court as, in December 2015, it had issued a detailed order to curb straw burning. The Centre and the governments of Punjab, Haryana and Uttar Pradesh are the respondents in the case.

In its order, the NGT had noted that crop residue burning was a common feature in Delhi, UP, Punjab, Rajasthan and Haryana, as they have “two or more growing seasons – one from May to September and another from November to April. The farmers often set fire to the fields to clear them of crop residue. The standing straw is burnt to clear the fields”. Crops are burnt around this time of the year because farmers had cultivated rice and want to prepare the fields for sowing wheat ahead of winter.

Taking cognisance of the fact that crop residue in nearby states leads to a blanket of smoke over Delhi, the NGT had mentioned in its order how carbon dioxide levels in the air shoot up by 70% “The concentration of carbon monoxide and nitrogen dioxide rises by 7% and 2.1%, respectively, triggering respiratory and heart problems. Also, it was stated that soil loses 6-7 kg nitrogen per ton, 1-1.7 kg phosphorus, 14-25 kg potassium and 1.2-1.5 kg sulphur due to stubble burning. In total, the loss of nutrients is around 1.5 lakh 12 tons per annum.”

During the course of the hearing, the states admitted that they were trying their best to end the practice of straw burning and had even made attempts to educate the farmers about the evils of burning crop residue and its adverse impact it can have on the air.

The states also said that they were in the process of initiating programmes for alternative utilisation methods of agricultural residue through the installation of biomass based power plants, using the residue crop as a raw material for other activities.

Haryana had stated that it had prohibited burning leftover straw in September 2013 across the state.

While in Punjab there is no ban on burning straw, the NGT had mentioned how the Punjab and Haryana high court had directed the constitution of a high-powered committee under the chairmanship of the chief secretary, which in March 2009 had decided that the agriculture department would promote demonstrations and custom hiring for suitable agricultural machinery and promote the use of straw-balers for bale-making as a long-term solution for this problem. Punjab had also prepared a draft policy for the “management and utilisation of leftover paddy and wheat straw/stubble”.

But clearly, the efforts have not borne fruit and a large portion of the nearly 20 million tonnes of straw in the fields are still being burnt. Moreover, as news reports from Punjab suggest, the Centre has not fulfilled its promise to provide money to the states to enable them support the farmers in procuring straw chopping machines. ‘Happy Seeder’ yet to bring smiles

On behalf of the Centre, the Department of Agriculture and Cooperation in the agriculture ministry made a policy decision to extend financial assistance to the farmers for procuring ‘Happy Seeder’, which is used for sowing wheat without burning any rice residue.

While Punjab needs about 1,000 such machines, at present it has only about half as many. A plan worth Rs 6,600 crore was drawn up to purchase machines like choppers and shredders, ‘Happy Seeders’ and ‘zero tillage’ but the Centre delayed releasing the payment.

In the absence of enabling legislations, deputy commissioners in Punjab use powers under Section 144 of the Criminal Procedure Code to impose fines and jail terms of up to six months on those burning straw in their fields. While over 400 people have been booked this year as well, clearly the numbers are too little, as the air pollution levels are showing.

Uttar Pradesh has lagged significantly when it comes to taking any action against the violators. It had submitted before the NGT that as per a November 2000 notification, the entire state was declared an air pollution control area under Section 19(1) of the Air Act but it had not banned burning agricultural waste and claimed that the proposal was “under serious consideration”.

The government has also said that through the ministry of agriculture, cooperation and farmers welfare, it had drawn the National Policy for Management of Crop Residues 2014, which envisaged the adoption of technical measures, including diversified uses of crop residue, capacity building and training along with the formulation of suitable legislation. The policy also envisaged satellite-based remote sensing technologies to monitor crop residue management, with active involvement from the National Remote Sensing Agency (NRSA) and the Central Pollution Control Board (CPCB).

In light of all these submissions, the NGT had recommended that satellite-based monitoring mechanisms should be adopted by the states through the State Remote Sensing Agency for acting against stubble burning in open fields, and weeds and top soil biomass burning along roads, highways and canals. It had also suggested engaging the concerned patwaris, block development officers and police stations for immediate action via SMS.

The agriculture ministry was also asked to take the assistance of the NRSA to monitor stubble burning through satellites in October-November and April-May every year at the national level.

Finally, the CPCB was urged to establish ambient air monitoring stations in the states to capture and build a database on stubble burning and crop residue burning under the National Air Monitoring Programme. To begin with, 20 stations were suggested in Punjab and 10 each in Haryana and western UP.

The NGT had also recommended putting agricultural residue to alternative uses like energy generation, and for producing ethanol, paper and packaging material, to benefit the farmers and also to protect the environment.

The states were also directed to implement the National Policy for Management of Crop Residue. The states were also told to take steps to educate and advise farmers through the media, gram panchayats and corporations about how crop residue burning is injurious to health and can cause serious air pollution. States should also tell farmers that it is now banned or prohibited by law, and make farmers aware of how agricultural residue can be extracted and utilised for various purposes, including manufacturing of boards, fodder, rough paper manufacturing and as a raw material for power generation.

The NGT had also directed all the states to evolve a mechanism for the collection of crop residue, its transportation and utilisation for appropriate purposes. It had also noted that in cases of persistent defaulters of crop residue burning, an appropriate coercive and punitive action could be taken by the concerned states, including launching prosecution under Section 15 of the Environment Protection Act of 1986.

But as Anumita Roychowdhury of the Centre for Science and Environment pointed out, the implementation of the plans has clearly been lacking. And this is reflected in the high air pollution levels seen in Delhi over the past week, which has been compounded by adverse climatic conditions, especially low wind speed.

The foreign media too has reported how India has failed to curtail the fires set to rice fields by hundreds of thousands of farmers in Punjab and Haryana, where much of the nation’s wheat and rice is grown. With near 32 million tonnes of straw being left in the fields, every year the country witnesses this phenomenon a little ahead of the sowing season.

The New York Times reported how straw burning had contributed immensely to the particulate levels reaching 688 micrograms per cubic metre in Delhi on October 31, more than ten times the safe limit. The farmers, it said, claimed that they burnt straw because they could not afford to dispose of the material any other way.

Clearly, all the submissions of the governments and the directions of the NGT to improve awareness have not had the desired impact.

Roychowdhury said the Centre has proposed a two-pronged strategy to tackle the problem of straw burning. “One involves putting the straw back into the earth with the help of seeders to enhance the soil nutrients. The other involves taking all the straw out for its use in biomass energy plants. This would also require separate markets in which the straw would be purchased from the farmers and then used for generating electricity.” While seven such plants have been built in Punjab, six more are in the pipeline.

However, as all these plants would together consume only about 10% of the straw in the state, more investment would be needed soon to use all the excess straw.

In this regard, Roychowdhury said the primary focus of the states and the Centre now is to grant subsidies to the farmers to put the straw back into the fields. “They have to subsidise the scheme for the farmers to buy and use this happy seeder equipment. In Punjab, the government has announced 30% subsidy and they want to take it to 50%. But they also want the Centre to make some contribution.”

Stating that the Environmental Pollution (Prevention and Control) Authority, set up by the Supreme Court, and the NGT have both called upon the governments to put up sufficient infrastructure and collection points to bring the straw together for power generation, Roychowdhury said: “The process has started but the scale of implementation is still limited. That is where they will have to pull up their socks.”