How a Spring Revival Scheme in Sikkim Is Defeating Droughts

A programme to 'recharge' springs has ensured that parts of the state now get water all year round. 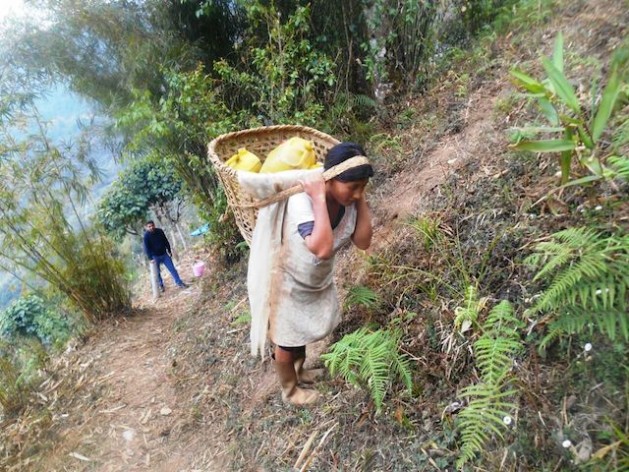 Women are always hit hardest by water scarcity as they have to travel longer distances to fetch water, which increases their workload and compromises their ability to perform other essential and livelihood functions. Credit: Pem Norbhu/IPS

Gangtok: Bina Sharma, a member of the Melli Dhara Gram Panchayat Unit in the southern part of India’s northeastern Himalayan state of Sikkim, is a relieved woman.

For the past three years, Sharma said, she has received hardly any complaints from villagers about water disputes.

“Until a few years back, our springs were staying almost dry for five months from December to April. During those months I often used to get complaints from the villagers against their fellow villagers as they would fight for water,” Sharma told IPS.

People in most parts of the mountainous Sikkim, and those in other mountainous areas across the region, use spring water for their personal consumption, kitchen gardens, farms, cattle and poultry. According to Sikkim First, an economic and political journal, about 80% of Sikkim’s rural households depend on springs for drinking water and irrigation.

From experts in Gangtok to laymen in the far-off villages, everyone agrees that erratic rains and frequent droughts have resulted in the drying up of springs in many parts of the state, especially in south. Some say that the problem became worse after the 2011 earthquake in Sikkim.

Many studies, including the IPCC’s 5th Assessment Report, have reported changes in precipitation and temperature in the Himalayan region in recent years, but the International Centre for Integrated Mountain Development says there is a major need for more research on Himalayan precipitation processes, as most studies have excluded the Himalayan region due to the region’s extreme, complex topography and lack of adequate rain-gauge data.

Adapting to changes, the Sikkim way

Thankfully, Sharma said, the water security scheme of Sikkim’s rural development department for recharging the springs “seems to be working in our village” since it was started in 2012. “We get water all year round now,” she said.

The brain behind devising this innovative scheme is Sandeep Thambe, an Indian Forest Service officer with a mechanical engineering background who has also carried out extensive research on water and environmental issues in Sikkim and is currently a professor at the Indian Institute of Forest Management (IIMF), Bhopal.

Hari Maya Pradhan, a woman who lives alone in her home in Melli Dhara, said that she had decided to give up rearing poultry and cattle as a livelihood option because she had to endure so many hardships to access water. “But now I feel a lot better after the villagers worked hard and dug up the ponds [which help in recharging the springs],” Pradhan, who has two cows and a small poultry unit, told IPS.

Before the village’s water crisis subsided, students of the local Nelligumpa Secondary School had to regularly take two litres of water from their homes to the school.

“Many times we protested and were preparing to take all our students to Gangtok to stage a protest demonstration. But our woes got automatically addressed when our springs started producing water in the dry season as well,” said Norbhu Tshering, the school in-charge.

In almost all parts of Sikkim, people directly connect plastic pipes to the small springs spread above their habitations to avail the natural water supply. But in the south and western parts of Sikkim, getting water from the springs all through the season has become impossible for more than a decade.

In 2009, this prompted Tambe, who then served in the state government’s Rural Development Department, to start the Dhara Vikas (or Spring Development) programme to revive and maintain the drying springs and lakes particularly in the southern and western parts of the state.

According to Tambe, the core thrust of Dhara Vikas is to catch the surface runoff water and use it to recharge groundwater sources after identifying the specific recharge areas of springs accurately through scientific methods by digging staggered contour trenches and percolation pits.

“With increasing population, degrading health of watersheds and impacts of climate change, the lean period discharge of these springs is rapidly declining,” Tambe said, adding that artificial recharging has thankfully shown encouraging results.

He said that less than 15%t of the rainwater, as has been estimated in various studies, is able to percolate down to recharge the springs, while the remaining flows down as runoff often causing floods.

“Hence, a need was felt to enhance the contribution of that rainwater in ground water recharge, thereby contributing to rural water security,” Tambe told IPS.

Women, Tambe said, are always hit hardest by water scarcity as they have to travel longer distances to fetch water, which increases their workload and compromises their ability to perform other essential and livelihood functions. Reduced access to water, he said, also impacts health, hygiene, and sanitation.

Sarika Pradhan of Sikkim’s Rural Development Department said that 51 springs and four lakes in 20 drought-prone Gram Panchayats of Sikkim have been revived so far as the rural development department has mapped 704 springs in the village spring atlas, which provides information about all the mapped springs.

Her colleague, Subash Dhakal, said that trenches and percolation pits have been dug over an area of 637 hectares under MGNREGA for reviving these springs and lakes with an average cost of Rs 250,000 per spring.

*Research for this story was supported by a grant through The Forum of Environmental Journalists in India (FEJI) in collaboration with the Ashoka Trust for Research in Ecology and Environment (ATREE) Media Fellowships in Environmental Conservation, 2016.