A report identifies South Korea as the third-biggest public investor in overseas coal-fired power plant projects among the G-20 group of major economies. 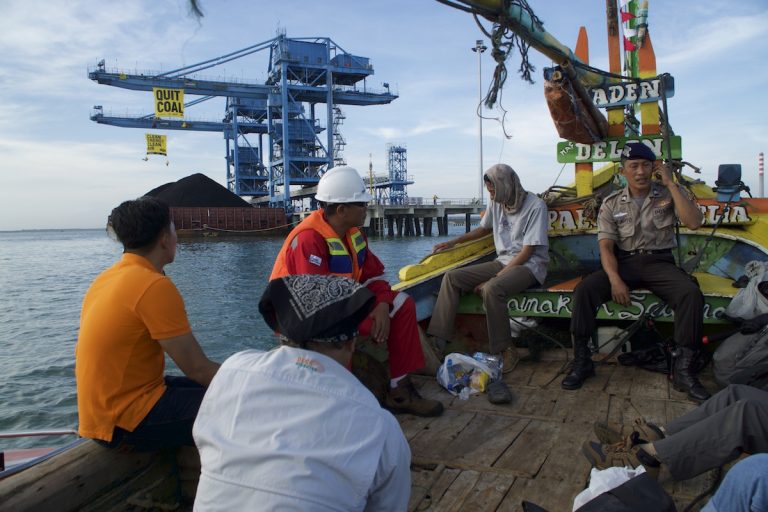 Police and securitiy aboard a journalists’ boat as anti-coal activists unfurl banners and block the loading of coal at the Cirebon coal plant in West Java. Building of the 1,000-MW power plant began in 2016, with Export-Import Bank of Korea providing a 600 billion won loan for the project. The construction is set to be completed in 2022. Photo: Ardiles Rante/Greenpeace.

Jakarta: A quick scan of social media trending topics in Southeast Asia reveals K-pop to be the flavour of the moment. But the highly polished and cannily choreographed girl and boy groups aren’t the only major South Korean imports into the region.

There’s also the life-threatening pollution generated by coal-fired power plants funded in part by South Korean financial institutions, according to a new report from Greenpeace.

And these financial institutions are pumping money into coal projects that wouldn’t meet the strict emissions standards imposed at home, with 7 trillion won ($5.9 billion) in investments between January 2013 and August 2019, according to the report.

“[South] Korean public financial agencies and companies are investing a lot of money in overseas coal power plant projects,” Son said. “The reason is because using weak environmental regulations, they can make a lot of money from it.”

More pollution than back home

For the report, Greenpeace evaluated 10 coal plants financed by South Korea in Bangladesh, Indonesia and Vietnam. It found that the lax emissions standards in the host countries for dangerous air pollutants allowed these plants to emit up to 18.6 times more nitrogen oxides (NOx), 11.5 times more sulfur dioxide (SO2) and 33 times more dust pollution than plants in South Korea.

“The burning of coal releases pollutant particles that penetrate into our cells, damaging every organ in our body, causing everything from dementia to harming unborn children,” said Tata Mustasya, climate and energy campaigner for Greenpeace Southeast Asia. “Coal is also the single worst contributor to the global climate crisis.”

Air quality in Bangladesh, Vietnam and Indonesia already ranks as some of the most polluted in the world, and the operation of these coal plants serves only to exacerbate the problem, according to the report.

The pollution from these plants could lead to 1,600 to 5,000 premature deaths each year, or between 47,000 and 151,000 total premature deaths over the typical 30-year operating period of such power plants, it says.

From the cases evaluated, the authors say Vietnam will account for 38 percent of the total death burden, followed by Indonesia (29 percent) and Bangladesh (20 percent).

The rest of the premature deaths, 13 percent, will occur in neighbouring countries — China, India, Cambodia, Myanmar, Thailand, Laos and Malaysia — that are otherwise uninvolved in the power plant projects but will nevertheless be affected because of the dispersal of the pollution across national borders.

“[South] Korean people feel really shameful because [South] Korea is a developed country and they want [South] Korea to be the leader of justice and morality, becoming a role model [for other countries],” he said. “But what we’re doing is totally the opposite, so we are really ashamed.”

He added the situation was ironic, given that South Korea was once subjected to pollution generated by the hundreds of Japanese power plants and factories that set up shop in the country in the 1960s and ’70s.

“To avoid strong environmental regulations, Japanese companies moved their factories and power plants to South Korea and that created a lot of environmental impact and public health impact,” Son said.

Japanese investment in South Korea’s industrial sector reportedly reached $1 billion from 1965 to 1975, accounting for 60 percent of the total foreign investment. There were 978 Japanese factories in South Korea during that time, more than from any other foreign country.

The resultant pollution prompted the South Korean government to strengthen its environmental regulations, Son said, and since then the country has enjoyed a reputation for its stringent anti-pollution policies.

Every year, the government renews regulations on emissions from coal-fired power plants. It’s also currently considering a policy to temporarily shut down nine to 27 such plants and limit the operation of other coal plants from December to March every year, when air pollution is at its worst. The administration of President Moon Jae-In had in 2017 already announced that it would not allow any new coal-fired plants to be built in the country.

“The most recent policy announced by the government is a plan to invest 20 trillion Korean won [$17 billion] during the next 4 years to reduce air pollution,” Son said. “And this includes a reduction in coal plants and increasing renewable energy in energy mix to 35 percent by 2040.”

But even as the South Korean government moves toward a gradual phase-out of coal, its public financial institutions continue funding investments in new plants overseas; up to 4.5 gigawatts (GW) in combined capacity is under consideration for possible investment.

“The most shameful thing is whenever we criticize these financial institutions, their excuse is they only finance coal plants with the most advanced technology and they will follow the environmental regulations in those [host] countries,” Son said. “But what they’re actually doing is exporting pollution.” 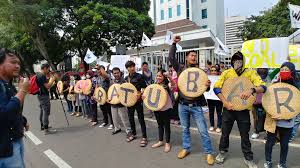 Locals who are affected by coal power plants around Indonesia gather during a protest in front of the Ministry of Energy and Mineral Resources office in Jakarta, Indonesia. They’re demanding the government to switch from coal to renewable energy. Photo: Hans Nicholas Jong/Mongabay.

Lauri Myllyvirta, a co-author of the report and now lead analyst at the Centre for Research on Energy and Clean Air (CREA), said what made the South Korean-funded plants particularly hazardous was that they were located near densely populated areas, exposing more people to air pollution.

In Indonesia, for instance, the Greater Jakarta are is home to 34 million people, and the nearby city of Bandung has 6 million. Located near both are the Cirebon 2 power plant and the Suralaya 9 and 10 power plants. Myllyvirta cited the Suralaya plants as a case in point.

“If we look at the emission limit, it varies from 15 times to 50 times higher than what’s allowed in South Korea,” he said. “None of the power plants that we look at would be legal to be built in [South] Korea. And in Indonesia, these plants would mean 28,000 premature deaths over a 30-year operating life.”

If all the plants funded by South Korea were held to South Korean emission standards, pollutant concentrations would be reduced substantially across the board, and the total number of people exposed to pollution levels exceeding WHO guidelines would decrease sharply by 99.8 percent, from almost 2 million people to 4,000, according to the report.

This would effectively avoid around 90 percent of the modeled annual premature deaths, the report adds.

“It’s something that we’ve been highlighting over and over again over the past couple years,” Myllyvirta said. “Around the world’s largest mega cities, you’re still planning to build coal plants without basic pollution control devices that have been routine in other countries. If there’s one place where you need to install pollution control devices, it’s around Jakarta where many people are exposed.”

The Indonesian government, he said, could avoid that mistake entirely.

“Indonesia can do much better than South Korea and not follow the mistake that the South Korean government made,” Son said.