The twelve Central Asian and Himalayan countries that have committed to protecting the snow leopard designated October 23 as International Snow Leopard Day. The wildlife department rescued Yuuki as a three-month-old cub. Though he can no longer be released into the wild, he is still frisky and full of life. Photo: Dhiraj Singh/UNDP India

For a devoted cat person like me, the mere idea of an encounter with the snow leopard, one of the most elusive and exotic cat species, was motivation enough to brave altitude sickness and the cold, biting winds of Ladakh. Though I couldn’t spot one in the wild, I did have an emotional meeting with a three-month old cub that had been abandoned by his mother and rescued by the wildlife department. Despite being unable to be released into the wild, he was frisky and full of life. I named him Yuuki, which is Japanese for ‘courage’.

There are only 4,000-7,000 of Yuuki’s brethren left in the wild, their habitat spanning the rugged and snowbound landscapes of 12 Central Asian and Himalayan countries, including India. It is not easy to access these high-altitude regions, so we don’t have accurate estimates of just how many snow leopards there are. The 12 range countries have together formed the Global Snow Leopard & Ecosystem Protection Program (GSLEP), partially to concentrate intensive national and international efforts at conducting an accurate census.

What we do know is that snow leopards are under threat. The Convention on International Trade in Endangered Species of Wild Fauna and Flora lists the snow leopard under Appendix I: species threatened with extinction. In 2002, during the 11th Meeting of the Scientific Council of Convention on Migratory Species of Wild Animals, experts noted their status as ‘requiring concerted action’. The species is also listed as vulnerable in the IUCN Red List. Between 221-450 snow leopards are thought to have been killed annually since 2008, which approximately four a week.

Why are snow leopards important? Apart from how beautiful they are, snow leopards are the apex predators of high-altitude landscapes and an indicator of the overall health of their ecosystems – which hold the second-highest amount of freshwater on Earth in the form of glaciers, wetlands and rivers. Rocks, moraines and scree are painstakingly eroded over millennia into fertile soil, and the lofty peaks define the most important climatic event for over a quarter of the world’s population – the monsoons.

By keeping the populations of wild herbivores like the Himalayan blue sheep and ibex in check, snow leopards ensure that the pasturelands are not overgrazed, which can erode fertile soil and even cause destructive flash floods. In recent years the Ladakhi people have seen not a few of these, a clear sign of climate crisis impacting lives and livelihoods.

Snow leopards are shy and solitary, almost hermitic, yet they face multiple threats. Global warming is slowly but surely shrinking their habitat, similar to what polar bears are facing. Their habitat is also being disturbed by unsustainable infrastructure development and other anthropogenic factors. Overgrazing by livestock has led to a decline in wild prey species, which is either starving these felines or forcing them to attack domesticated animals and become victims of retaliatory killing. Then there is poaching for fur, bones and other body parts.

What we can do 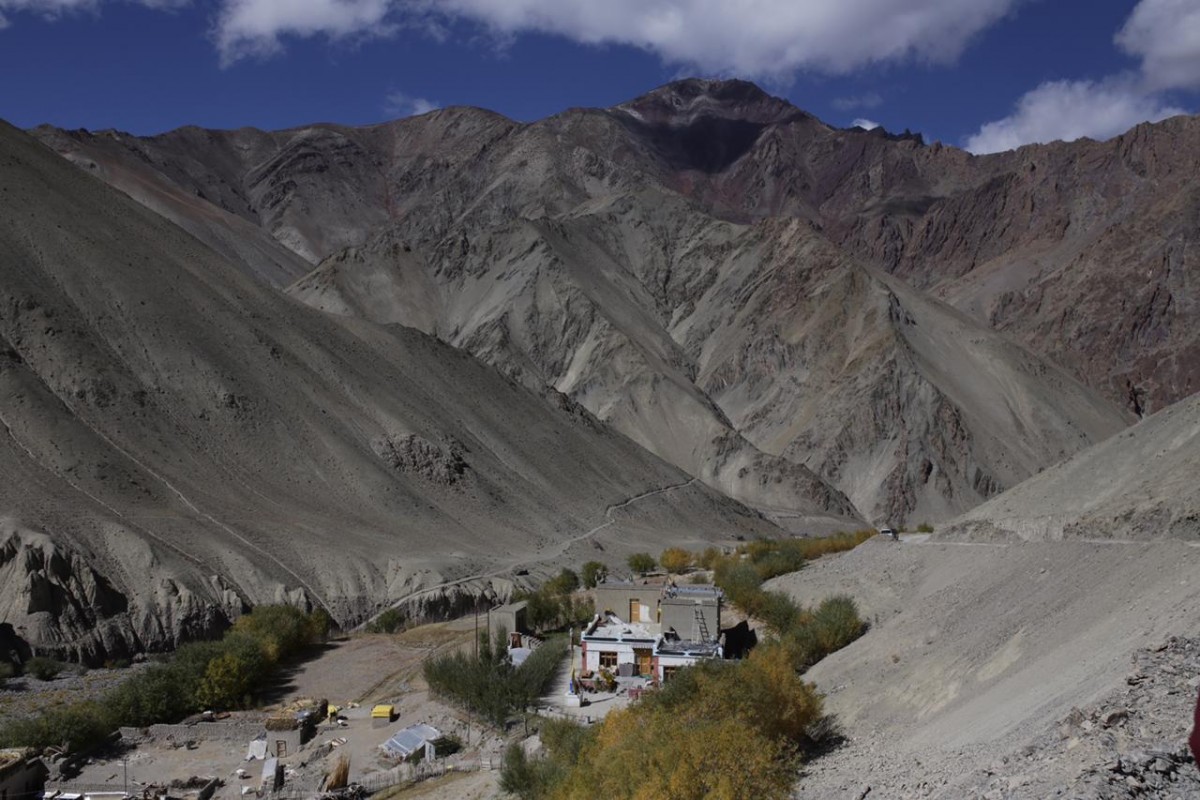 Rumbak is a small village at 4,000 metres above sea-level, with just nine families and a population of 120. Photo: Dhiraj Singh/UNDP India

There are two key areas to address: restoring the ecological balance by weaving sustainable livelihoods with conservation and/or reducing people’s dependency on natural resources from these habitats; and conducting awareness campaigns that reach everyone, from children to policymakers.

It is critical for India to protect the snow leopard as it has the third largest population of snow leopards globally, with an estimated 500-700 individuals. In recognition of the irreplaceable value of the snow leopard in natural and cultural heritage, India joined the other 11 range countries to adopt the Bishkek Declaration in 2013, which led to the formation of the GSLEP. October 23 was designated International Snow Leopard Day. The nations again came together in 2017 to renew their commitment to ensuring snow leopards and the people who live among them thrive in healthy ecosystems.

The UN Development Programme is working with India’s environment ministry and the Global Environment Facility to protect the snow leopard and its habitat through the SECURE Himalaya initiative, working closely with local communities and institutions to implement sustainable conservation strategies.

(Disclaimer: The author is affiliated with the UNDP.)

I saw this in action while in Ladakh. I visited Rumbak, a village lying at 4,000 metres above sea-level that has just nine families and a population of 120. Rumbak is considered one of the best spots globally for sighting a snow leopard. This is a community that thought of snow leopards as a threat. But now, they think of them as a treasure that brings tourists even in the lean and extremely cold winter months, when any other livelihood or economic activity is not possible.

The snow leopard’s inability to roar has seemed to render it silent. Few are aware of the fact that it is under threat, and the crisis the destruction of its habitat could create for billions of people. This Snow Leopard Day, let’s spare a thought for our friends like Yuuki. Let’s do our bit to revive it in the popular imagination – and maybe even take a trip to Ladakh! I know I’ll be visiting again soon to try and spot one in the wild.