According to the WHO’s list of 20 worst polluted cities, ten are in India. Of these, six are in North India and four in UP: Allahabad, Kanpur, Firozabad and Lucknow. 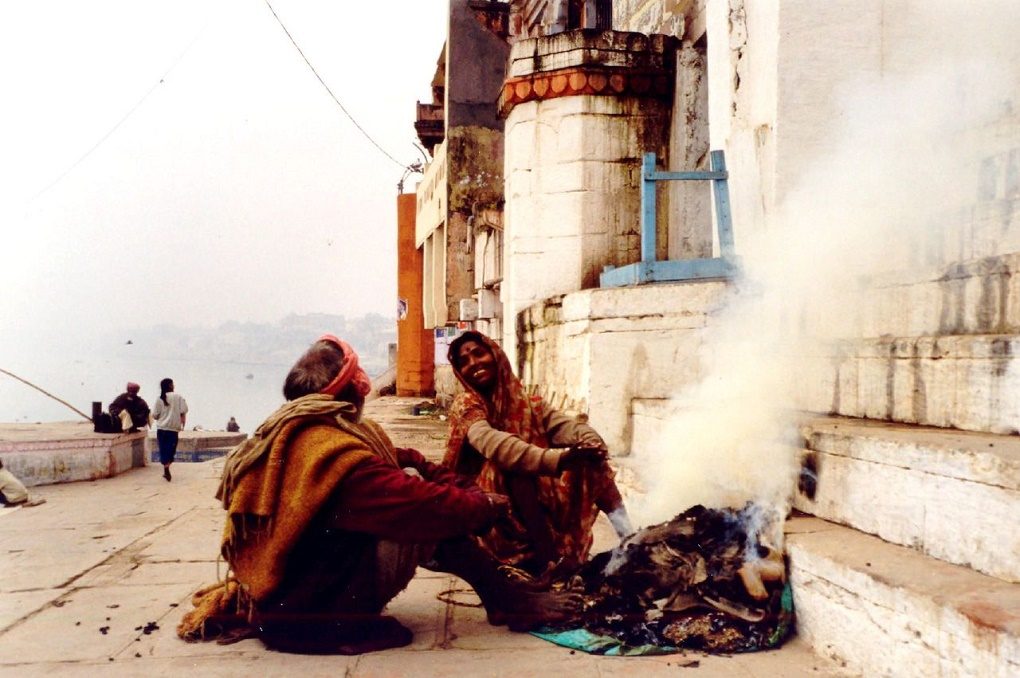 A major factor in air pollution is biomass burning, such as for poor who need warmth and have no other source. Credit: Ahron de Leeuw/Thirdpole

While India’s capital city, Delhi, features prominently in global headlines for its heavily polluted air, especially in the month of November following the festival of Diwali and then throughout winter, the problem is worse in smaller cities. According to experts, other cities in North India, particularly those lying in the Indo-Gangetic plains, are in far worse shape.

A recent report titled ‘Varanasi Chokes’ was released by the Centre for Science and Environment (CSE), IndiaSpend and Care4Air, and looked at air quality data of some of the highly polluted cities in Uttar Pradesh, the largest state in the Indo-Gangetic plain.

According to the dataset released by the Central Pollution Control Board (CPCB), the holy city of Varanasi that lies on the banks of the Ganga is now one of the most polluted places in the country. The report reveals that out of 227 days for which air quality data is available, the city had ‘zero’ number of good air days. Following suit, Allahabad also had ‘zero’ number of good air days out of 263 days when air quality was measured last year. Lucknow, the state capital, had just 15 good days out of 556 days monitored over years. Ghaziabad, which borders Delhi, saw only five good air days out of 127 when air quality was measured.

IndiaSpend collaborated with the Centre for Environment and Energy Development on a report called ‘Varanasi Chokes‘, which highlights the alarming levels of pollution in the holy city. Following suit, Allahabad also had ‘zero’ number of good air days out of 263 days when air quality was measured last year. Lucknow, the state capital, had just 15 good days out of 556 days monitored over years. Ghaziabad, which borders Delhi, saw only five good air days out of 127 when air quality was measured.

According to the WHO’s list of 20 worst polluted cities, ten are in India. Of these, six are in North India and four in UP: Allahabad, Kanpur, Firozabad and Lucknow. Varanasi – constituency of Prime Minister Narendra Modi and earmarked as a ‘smart city’ – is one of India’s three most polluted cities, as per the CPCB 2015 bulletin.

The Indo-Gangetic plain is a highly productive and fertile river basin that supports more than 200 million people. UP has a high concentration of industrial and agricultural activity. The key industrial hotspots of this state stretch from Ghaziabad to Sonbhadra. This belt hosts 10% of India’s coal-fired power generation plants – all located close to the Ganga.

According to a 2012 report by the Indian Institute of Technology (IIT) Delhi on aerosol formation, the entire Indo-Gangetic plain has high level of nitrogen and sulphur oxides, which are responsible for increased levels of particulate matter in the air – small particles blamed for rising asthma, chronic lung diseases and heart attacks.

There is no one source when it comes to air pollution, but many. These include dust, biomass burning, industrial emissions, coal-powered plants, deforestation and complex weather patterns. “Studies done by UrbanEmissions identified that the changing wind patterns in the Indo-Gangetic region especially during the winter season tend to carry the emissions from the power plants to several hundred kilometres. This leads to an exponential spike in the regional pollution levels,” said the report.

The same wind patterns also carry the toxic fumes from burning biomass (both because of burning municipal solid waste and farmers clearing fields by burning stubble) from neighbouring states. Identifying these various sources of pollutants is crucial to curb air pollution, experts say. And for that they recommend an effective monitoring network across various cities with state of the art technology.

At a workshop in Varanasi where the report was launched, S. Tripathi from IIT Kanpur said, “To tackle air pollution, the crux lies in understanding science and sources of problem such as biomass, large point sources. You need to understand source to tackle it efficiently. For instance, London has problem with nitrous oxide and ozone so that needs to be approached differently. Right kind of bits and pieces are needed to tackle the issue scientifically.”

Tripathi has been doing research on sources of air pollutants in Kanpur’s air using Accelerator Mass Spectrometry (AMS). Results showed that a major factor was biomass burning – when people use firewood for cooking, when municipal workers sweep up leaves and litter and set the whole pile ablaze, and when farmers burn stubble. He said that more sophisticated technologies exist that can distinguish whether pollutants coming from biomass are from stubble burning, leaf litter burning or solid waste burning.

Much of the conversation on air pollution centres around levels of small but dangerous particulate matters such as PM10 (those particles that are smaller than 10 microns, or 1/100,000 metres in width) and PM2.5 (particles smaller than 2.5 microns). Tripathi said the focus should be on even smaller particles called PM1 (particles as small or smaller than one millionth of a metre in diameter) which can directly enter our cell membranes without any barrier, making them even more dangerous.

“Industries remove PM2.5 and PM10 to some extent but not PM1 before emitting exhausts into the environment. Diesel engines, coal combustion, high temperature furnaces, cigarette smoke or re-suspended particles (roads, ash dikes, mines) release particles of less than 100 nm (nano metres). Nano-particles (less than 100 nm) can pass through the cell membranes and migrate into the blood stream, even into the brain. These cause asthma, lung cancer, cardiovascular disease, respiratory diseases, premature delivery, birth defects, and premature death. 80%, or the majority, of PM2.5 particles are actually PM1. If you identify the sources and manage to tackle them, then in effect you will be tackling PM2.5 particles,” explained Tripathi.

According to Sumit Sharma at The Energy and Resources Institute, “While Delhi has 35% of air pollution due to in-house sources like garbage burning, road dust and transport, UP generates 50% of the pollution inhouse.”

Monitor, measure, but how

A part of the problem is that India lacks infrastructure for even basic intensive monitoring of air quality, let alone highly precise and sophisticated, scientifically advanced technologies across the country.

While China has 1,800 monitoring stations, India just has 30 real-time stations that measure PM2.5. Out of these, 20 are in Delhi. Varanasi, which has worse air pollution spikes, has just one.

“Delhi is in the limelight as compared to other more vulnerable cities in the Indo-Gangetic plains because there is a high level of data available. Delhi has SAFAR’s AQI monitoring as well. Varanasi has just one station which didn’t give any readings for 11 days in the last two months,” said Aishwarya Madenini, author of the report.

Sagnik Dey from IIT Delhi added, “It is not just the number of stations. Choice of locations also matters. We will be coming up with a report on the required air quality monitoring stations in India in next two months.”

Dey, who has been researching the most polluted regions in India that are doing far worse than Delhi, said, “Long-term and short-term plans needs to be there and a framework to evaluate the success need to be instilled. And the success should be measured on the basis of changes in health impacts.”

He added that new technologies are needed to fight the pollution crisis. “Farmers burn stubble in fields because they don’t have an alternative. Due to changing climate, they get a small window to prepare for the next crop and so they are compelled to act first. This needs technology intervention.”

At the workshop, Yogeshwar Ram Mishra, District Magistrate of Varanasi, pressed the need to act instead of focusing on gathering more data. “I don’t think we need more data to know that there is a problem. Indo-Gangetic plain is most fertile and we find that our position is very bad when it comes to pollution. You go to any ghaat (riverbank) and without any technology you would know that the situation is bad. What we need are solutions and what we normally find is that redressal parts in various studies are not consistent.”

Varanasi district’s top administrator is not the only one worried. Doctors are calling for urgent action on air pollution as they have to deal with more and more health impacts. R.N. Vajpayee, well-known pulmonologist in Varanasi, said there was a 20-25% increase in cases of chest infection and bronchial allergies in the last 4-5 years. Paediatrician Pradeep Jindal said increase in respiratory diseases among children could be as high as eightfold in the last 22 years.

There is clearly a case for very urgent action.

This article was originally published on thethirdpole.net