What has escaped many researchers is that a species can be on the decline even when alive in the form of a few creatures, and this is almost always an indication that its extinction is impending.

A penguin's skeleton on display in a museum. Credit: marcelabr/pixabay 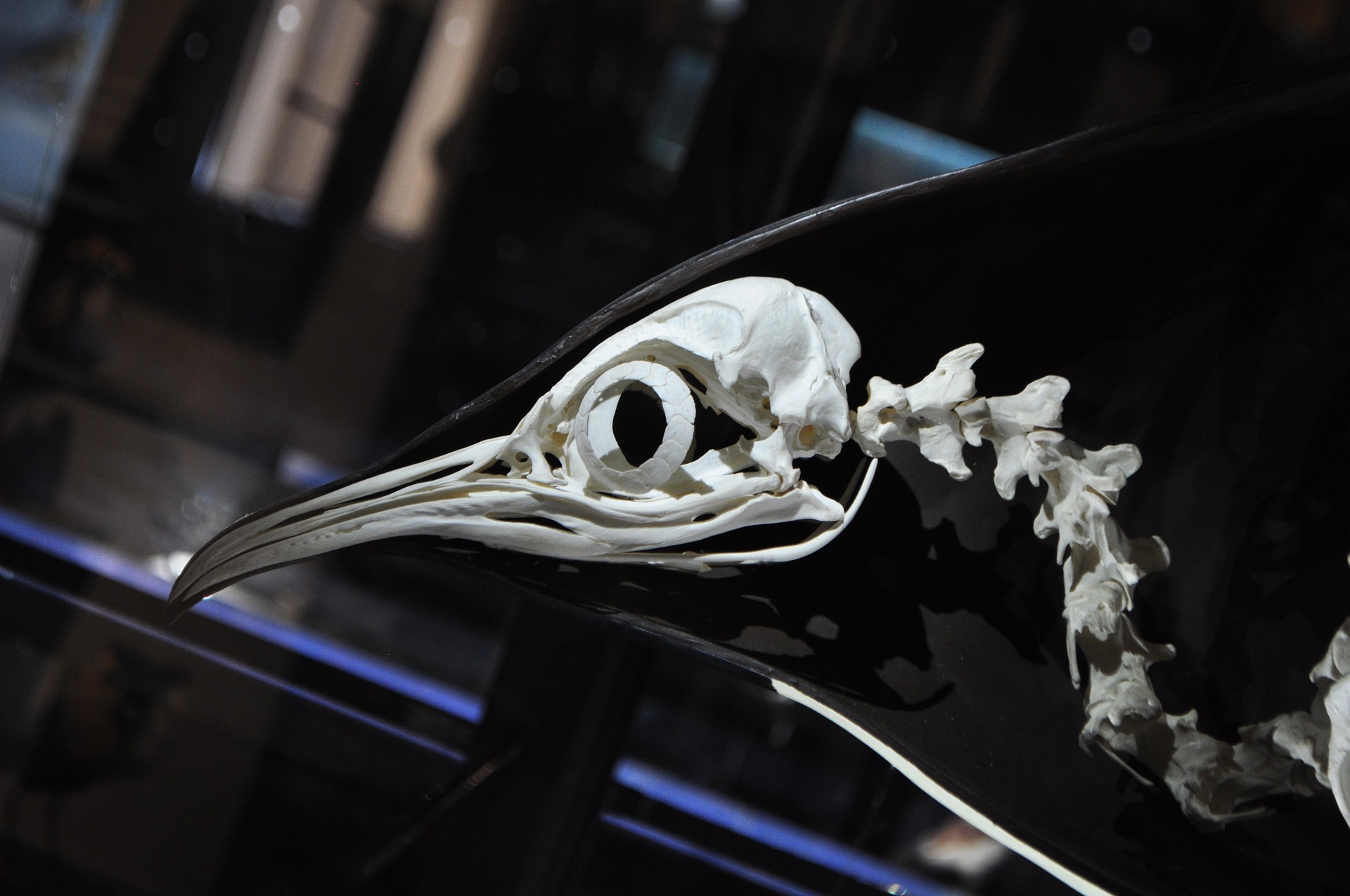 A penguin’s skeleton on display in a museum. Credit: marcelabr/pixabay

Imagine a world with only humans in it. No mischievous monkeys, no lumbering elephants, no birdsong to greet you in the morning, no snakes to give you the goosebumps. If you think this is too fantastic to be true, you might be in for a surprise: we’re actually on our way there. “In our lifetimes, in the next 20 to 30 years, we are going to see a lot of species go,” Krithi Karanth, a conservation biologist and executive director at the Centre for Wildlife Studies, Bengaluru, told The Wire.

Species extinction is not new. They have been going extinct frequently since life first evolved on Earth. On five occasions, they have disappeared en masse, in so called ‘mass extinctions’, when a large number of species disappear in a relatively short geological time period, forced by events like massive volcanic eruptions, the ice age, etc. The last mass extinction, which occurred about 65 million years ago, wiped off the dinosaurs and multiple other species. It was thought to have been caused by an asteroid strike, although this is disputed.

More recently, a study in 2015 had suggested that we might be entering the sixth mass extinction considering that about 200 hundred species have become extinct over the last century. The study’s authors figured this was alarming because the typical rate at which a species dies out is about two species for every 10,000 over 100 years, according to the authors, so 200 species blinking out should’ve taken about 800 to 10,000 years, not 100. Moreover, most of the species that have gone extinct are animals we don’t hear of often, let alone meet, like the Catarina pupfish or a bat called the Christmas Island pipistrelle. As a result, humans have been lulled into thinking the animals’ disappearance is more a slow decline that leaves enough and more time to act in its wake.

However, a newer investigation, published on July 10, has suggested that the sixth mass extinction event is already underway and at a rapid pace to boot. In fact, we may be right in the middle of it. This time, scientists looked not at the number of species that have already become extinct but studied how the population of vertebrate animals on land is falling around the world.

They used data from the International Union of Conservation of Nature (IUCN) on vertebrates that have been reported to have decreasing populations. The numbers – for 27,600 vertebrate species, or almost half of all the known vertebrates, including mammals, birds, reptiles and amphibians – were superimposed on a grid wrapped around the world, each square 10,000 sq. km in area. Through this exercise, they found that the population of about 32% of these species around the world was falling, either because of a direct fall in numbers or because their natural range was shrinking. The decline was found be particularly acute in tropical forests, which typically host a large number of species.

Although several studies have highlighted the loss of populations in species in biodiversity hotspots in the tropical regions, Karanth said, “What’s interesting is that the temperate areas are no better off.” These are regions beyond the tropics that include the wealthier nations of Europe and North America.

These regions saw more bird species decreasing than elsewhere. Reptiles’ populations are decreasing mostly in Eurasia and Africa, whereas the largest declines in amphibian populations are occurring in the Americas. In general, the analysis revealed that even species classified as “low concern” by the IUCN – about 30% of all vertebrates and 55% of bird species – are facing population losses.

“This is the case of a biological annihilation occurring globally, even if the species these populations belong to are still present somewhere on Earth,” said Rodolfo Dirzo, a biologist at Stanford University and one of the authors of the study, in a statement. He and his colleagues point out that most scientists focus on species extinction, which gives the impression that there is a slow, creeping loss of biodiversity on Earth. What escapes them is that a species can be on the decline even when alive in the form of a few creatures, and this is almost always an indication that its extinction is impending. 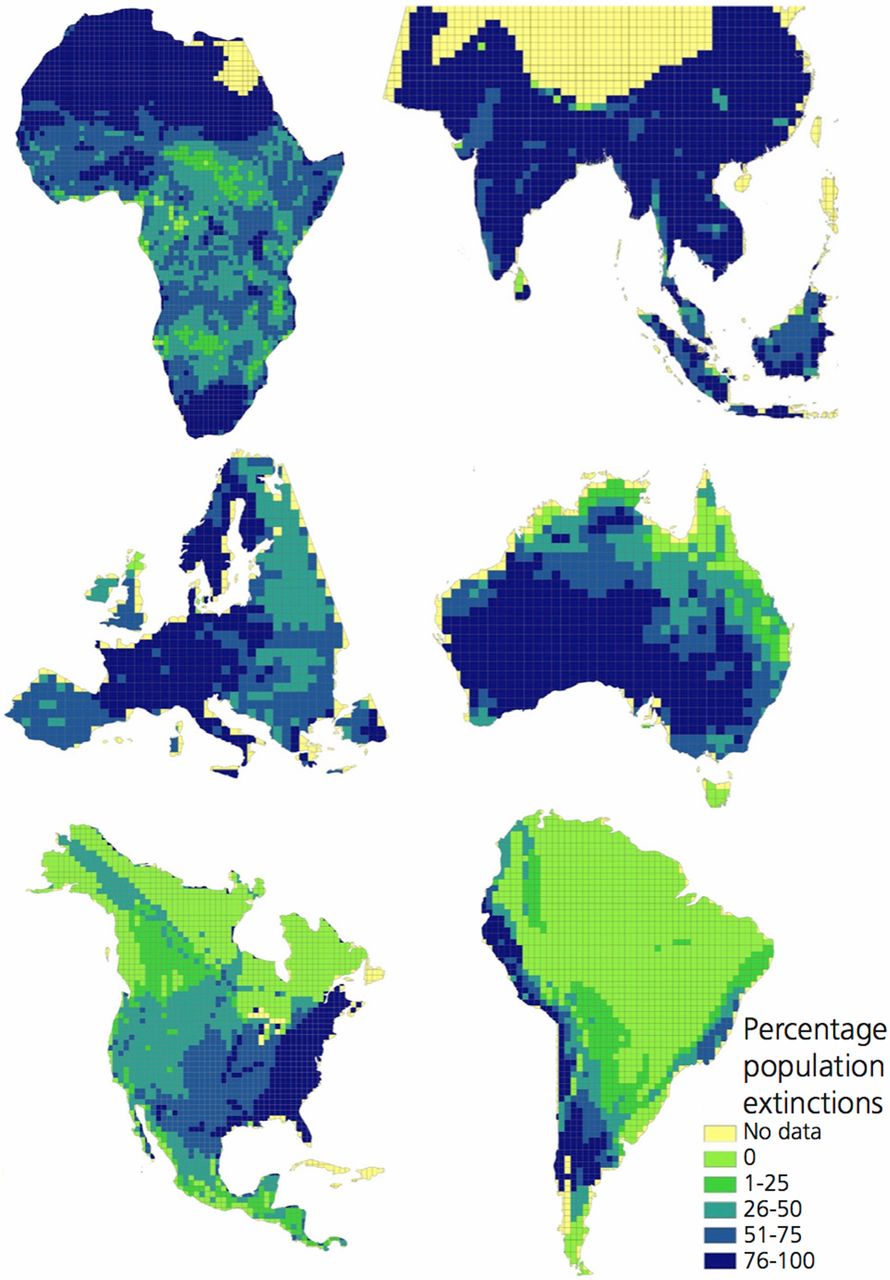 Percentage of local population extinction in 177 species of mammals. Because of the small sample size, biased to large mammal species, this figure can only be used to visualise likely trends in population losses. Caption and credit: doi: 10.1073/pnas.1704949114

Additionally, a survey of the population and distribution data of 177 mammals for the period 1900–2015 revealed that almost half of them have lost more than 80% of their range. As the map shows, most of Asia, Africa, Europe and Australia have seen mammal populations decline by more than 75%. For example, the lion, once found all over Africa, southern Europe and the Middle East, up to India, can now be found only in pockets of sub-Saharan Africa and in the Gir forest in India.

Several previous studies have highlighted the loss in the habitats of mammals, which varies depending on the species. Leopards have lost about 75% of their habitats. Lions and tigers have lost more than 90% of their ranges, but animals such as the Australian dingo and hyenas have lost only about 10 to 30% of their ranges, according to another study.

Karanth pointed out that “having small populations that are scattered – and there are a lot of fragmented populations – is not going to save these species”, even if there have been reports of “species blinking out locally”.

Today, human activity is the dominant driver of all change in the environment and climate, causing habitat losses for all other species, overexploitation of natural resources and has affected the climate. This has led to a calamitous decline in populations of vertebrate species, both common and rare. “I don’t think a planet dominated by humans is going to survive very long into the future,” Karanth said. Humans are only a part of the complex web of ecosystem that sustains this planet and human civilisation. With species disappearing, there will be a great loss in genetic diversity, which may impact our adaptability and evolutionary strategies to weather the fast-changing environment, promoting a cataclysmic chain of effects, exacerbating the deterioration of the planet.

A rather grim picture of our future; according to Karanth, this should have been painted a long time ago. Yet there may be some hope yet. Dirzo and his colleagues say that that we have a very narrow window for taking effective action, maybe two or three decades. Karanth agrees. Conservation effects can only help if they are scaled up and integrated with each other, she says. And only when all the efforts taken locally are tied up will they have any impact.