Sensing Change: How Sound, Light and Smell Can Affect Plants and Animals

A complaint by 'snake man' Rom Whitaker last week against a hotel blasting loud music next to India's largest crocodile sanctuary is a good occasion to remember that we often harm animals in more ways than we think. 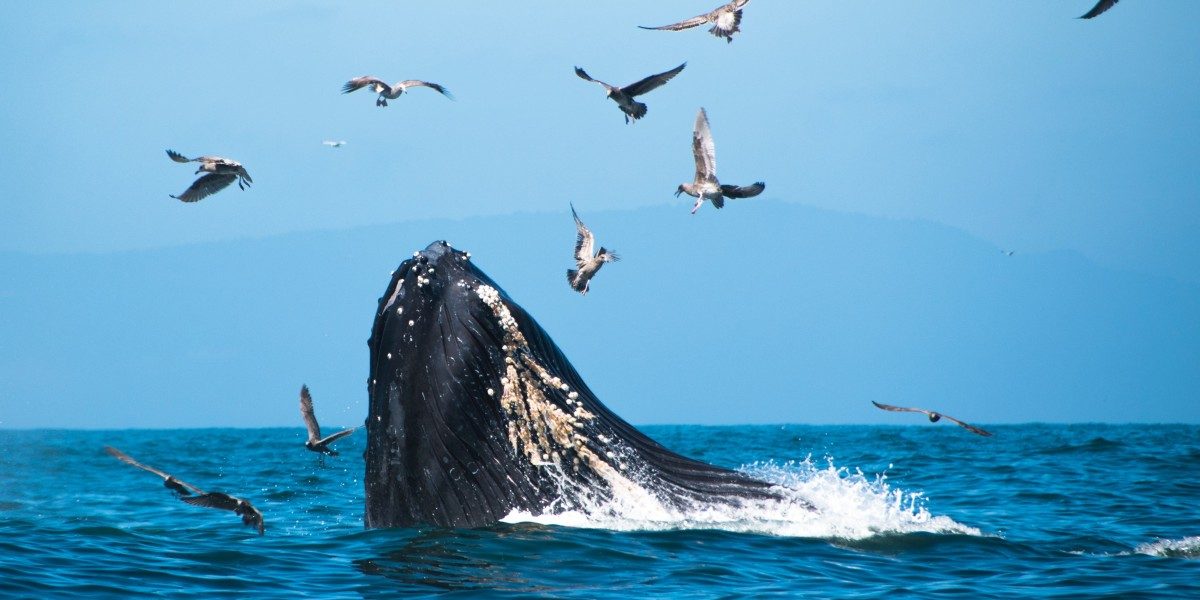 Noise and light pollution have been known to affect birds and marine animals as well. Credit: Humberto Braojos

Last week, Romulus Whitaker, known popularly as India’s ‘snake man’, published an Instagram post expressing his concern about the Sheraton Grand Hotel next door to the Madras Crocodile Bank Trust, outside Chennai, blasting loud music that was “triggering aberrant behaviour” among the animals.

“Sound is a weapon,” he wrote, “and I’m guessing that this auditory torture may well change their breeding and behaviour patterns. If any of you out there have come across information on the effects of noise on reptiles, please share.”

Message from our founder trustee Rom Whitaker: *UPDATE*There was a meeting at the Crocodile Bank today which was…

Indeed, conservation narratives have chiefly focused on direct threats like consumptive use (fishing, hunting, etc.) and exploitation. Experts have also rightly blamed land-use change and habitat destruction for biodiversity decline. In general, the more indirect or intangible the threat, the less it is likely to have both decision makers and civil society concerned.

Most reasonably environmentally conscious citizens argue for conservation by railing against the use of wildlife, but may not recognise how many normal items of daily use – such as rice, tea, detergents, etc. contribute to the decline of biodiversity and environmental degradation. While pollution is a well-recognised threat, it is chemical or biological pollution that gets the most attention.

Human activities similarly result in many other forms of pollution that can have severe impacts on wildlife and biodiversity.

For example, sea turtles can be heavily impacted by light pollution. While adult nesting turtles can be deterred by excessive coastal lighting, the impact on hatchlings is much worse. Sea turtle hatchlings emerge on the shore at night from their nests and locate the sea by moving towards the brighter horizon. Under natural circumstances, this would be the seaward side, which is open and has moon- and star-light reflecting off of the water’s surface.

Also read: In Lighting Up Our World, We Are Losing Sight of Others

Any form of lighting, including streetlights, residences and industry, can completely disorient hatchlings and prevent them from finding the sea, resulting in their deaths. Hundreds of thousands of turtle hatchlings die due to coastal lighting around the world.

A night-time map of lighting around the world indicates just how widespread this problem is. While ‘turtle-friendly’ lighting has been devised, it is used in few locations, and the problem is only mitigated by conservation NGOs relocating nests to hatcheries. In Rushikulya in Odisha, the forest department works with local villagers to rescue hatchlings by the thousands during mass-hatching events.

Large amounts of anthropogenic light affects the visual ecology of many animals. Apart from turtle hatchlings, fish, frogs, salamanders and migrating birds have their behaviour disrupted by excess light in the environment. Bees foraging at night and plants changing their phenology are also examples.

Light can particularly disrupt the behaviour of nocturnal species, but in general, scientists have found that bright days and dark nights are necessary for various aspects of physiology – from hormone production to brain activity – in many animals. 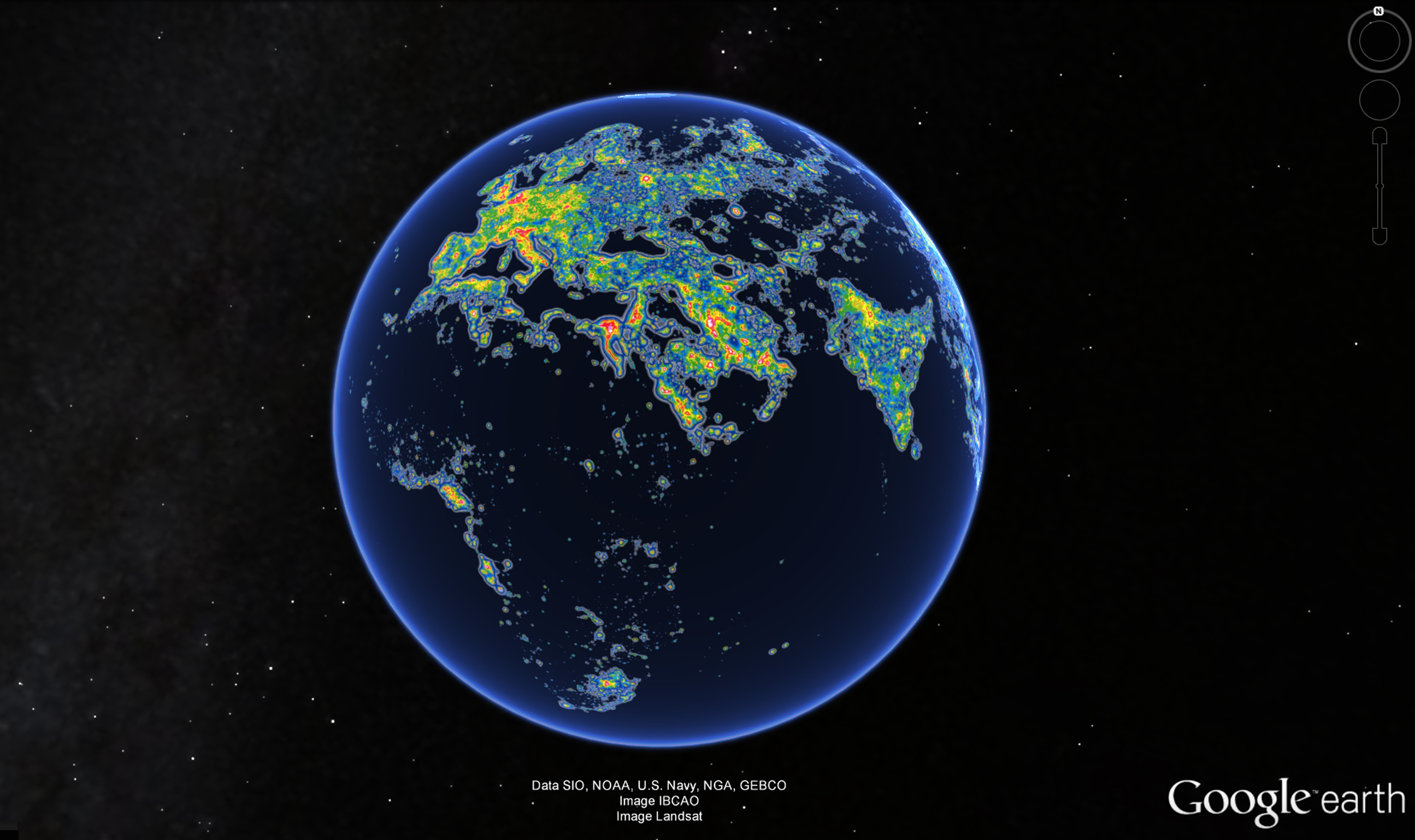 The Middle East and North Africa in the New World Atlas of Artificial Sky Brightness, as seen in Google Earth. Source: Science Advances

Anthropogenic sound or noise has been known to disrupt behaviour in both terrestrial and marine animals. Noise pollution can affect animals by masking their ability to detect prey or predators and to communicate with each other. As a result, it indirectly affects reproduction and survival.

Many birds sing at a different pitch or volume in response to noise. One well known example is of European robins, which sing at quieter times of the day or at night in noisy environments. The problem is that this can disrupt mating and affect breeding success. Similarly, studies on great tits and chaffinches show that ambient noise can affect their behaviour and survival. One can extend the results of these studies to infer that noise can potentially have negative impacts on many such endangered species as well.

Noise has perhaps been linked most directly to impact on whales and dolphins that use bio-sonar. The use of military-grade sonar equipment has been linked to the beaching of whales and to changes in behaviour that lead to decompression sickness in some whales. Some species are also known to sing louder and for longer in the presence of submarine detectors.

Another source of sensory disruption is through olfaction. The impact of chemical pollution on humans, wildlife and the environment through its lethal or sub-lethal toxic effects is well known. However, chemicals in the environment can also disrupt behaviour as many animals use olfactory cues.

Also read: How Noise Pollution Is Silencing Whale Songs – and Why That’s a Problem

Volatile organic compounds, which are produced by agricultural practices and urbanisation, for example, can interfere with plant-pollinator communication. These can have negative effects on both communities, resulting in the declines of both wild plants and crops, with downstream effects on the animal communities that depend on them. Given that many natural landscapes are fragmented and surrounded by human dominated areas, these impacts can affect ecosystem function at a very large scale.

Thus, wildlife can be affected in a variety of way by our actions. Too often, we focus on the direct and immediate threats or attempt to ringfence our activities in a way that we believe does not impact wildlife.

Often, hunting is equated with poaching – though communities may have been practicing it for centuries – but the sustainable use of wildlife may have a far lower impact on biodiversity and ecosystems than these pervasive threats.

Like climate change, pollution from sound, light and smell does not confine itself to the artificial boundaries we have created. Driving a car, using a mobile phone, drinking tea, taking a flight or using lights at night can be far more detrimental than we realise. And yet, though most people are guilty of these everyday actions, there is little recognition of the impact they have on conservation.

Kartik Shanker is a faculty member at the Centre for Ecological Sciences, Indian Institute of Science, and trustee at the Dakshin Foundation, Bengaluru.