In a submission to the environment ministry, activists representing the South Asia Network on Dams, Rivers and People have asked that the new draft rules be scrapped entirely, lest they "jeopardise wetland conservation" in India. 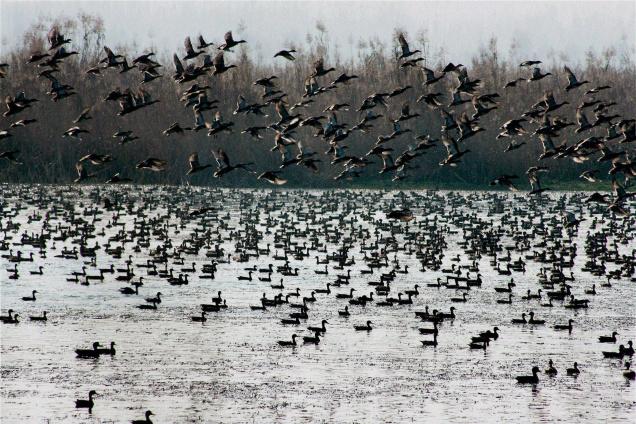 A flock of migratory birds fly across a wetland in Hokersar on the outskirts of Srinagar. Credit: PTI.

Activists representing the South Asia Network on Dams, Rivers and People (SANDRP) have called on the Ministry of Environment and Forests (MoEF) to scrap new rules it has drafted on the protection of wetlands, saying that the new draft rules are “seriously watered down” and that they “can jeopardise wetland conservation in the country and need to be rejected in (their) entirety”.

In April this year, the ministry released the new draft rules despite the existence of the Wetland (Conservation and Management) Rules 2010, on the basis that the older rules were poorly implemented across states, with the exception of Odisha. The environment ministry is seeking suggestions over the rules until June 6 this year.

In a letter to the ministry, SANDRP has taken serious objection to the draft rules and has called for new rules to be constituted a participatory consulting process and for the 2010 rules to be implemented in the interim. The representatives of the network have said that the ministry has “disregarded” a consultation process that began in 2008, when the first draft regulatory framework for wetland conservation in India was issued by the MoEF.

The activists point out that wetlands are incredibly important to biodiversity and livelihoods in India:

“They store water, recharge groundwater, purify water (East Kolkata Wetlands, also a Ramsar Site, are a remarkable example of sewage treatment by a wetland ecosystem), moderate floods, help fight droughts, are important refuge of biodiversity and also act as carbon sinks making them irreplaceable and invaluable in the context of climate change. They provide livelihoods to millions of Indians directly, while providing indirect benefits to many more people. (…)A study on the Bhitarkanika mangrove ecosystem in Orissa (second largest mangrove forest of India mainland), estimated that cyclone damage avoided was highest in the village that was protected by mangrove forests. The loss incurred per household was greatest  in the village that was not sheltered by mangroves and lowest in the village that was protected by mangrove forests.”

The network has called the new draft rules a “phenomenal low,” and has pointed out key problems with the rules, including the fact that they do not include a role for the Central Wetland Authority or for local communities and non-governmental members in the State Wetland Authorities. In addition, the network’s submission points out that the rules would permit states to notify wetlands in any matter they see fit, as there are no criteria or guidelines given on the matter. There is also no mention of activities that should be regulated or prohibited at wetlands.

This is despite the fact that environment minister Prakash Javadekar said this May that the use of wetlands for sewage disposal is “disturbing.”

The full text of the submission is below:

“Wetlands are some of the most valuable ecosystems that we have. (They are) irreplaceable and invaluable for the goods and services that they provide. They have been facing unprecedented abuse at our hands. The importance of wetlands has been highlighted recently in Chennai and (after) the Jammu and Kashmir floods,” said Parineeta Dandekar, associate coordinator at SANDRP.

Dandekar argued that the ministry’s act of scrapping existing legislation for the protection of wetlands and the Centre’s abdication of responsibility on the matter “is a new low in (the) environment governance of the country.” She said that the states have a “dismal track record” when it comes to protecting wetlands.

The network has requested a wider public consultation on the matter, involving stakeholders such as fisherfolk, farmers, boatsmen and urban planners.