What a School in Bengal Teaches Us About Sea Level Rise

There was a school on one edge of the Sagar island in the Sunderbans in 2014; it is not there anymore. Today, sea water regularly comes in a hundred metres beyond the spot where the building stood. 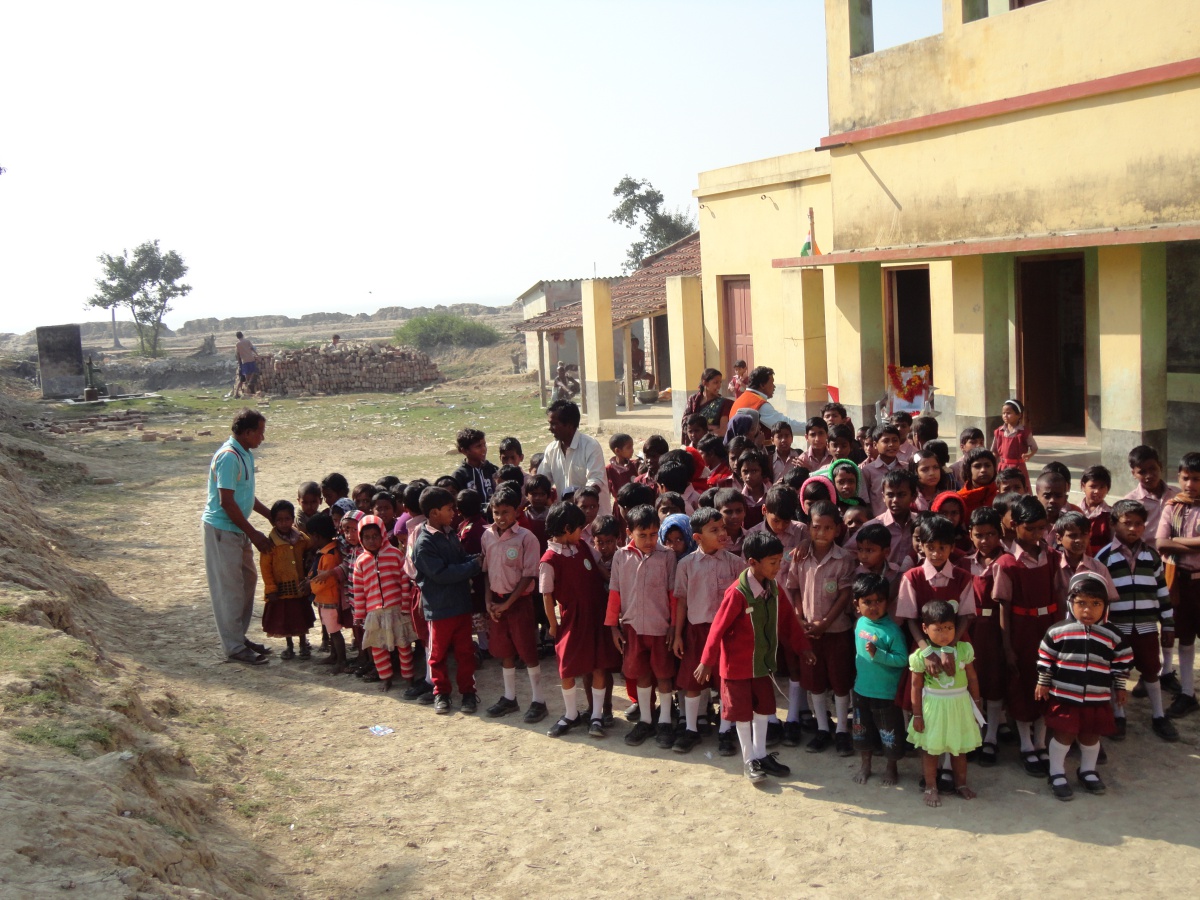 When a group of us visited Boatkhali Kadambini Primary School nearly four years ago, classes were on in full swing. It was, after all, January. Had we gone during the monsoon, things would have been very different. “Sea water enters the classrooms to a height of one-and-a-half feet,” the teachers told us, pointing to a mark on the walls. “All classes stop for five-six days in June, July and August. The water recedes after two to three hours, but it happens twice a day for a few days, so no classes are possible,” they said.

This primary school is at one edge of Sagar island in the Sunderbans, in northern Bay of Bengal. A few hundred metres away from the school one could see an earthen embankment, broken in parts, visible in the left of the photograph (top) I took then of the school kids. And beyond the embankment, the waters of the Indian Ocean.

But the school is not at that spot anymore. A few days ago, in early December 2017, one of the school’s senior teachers sent me photographs of that building taken last month. “The sea water now regularly comes in a 100 metres beyond the spot where our school used to be,” he said. “That school building you came to is completely destroyed. We had to shift to a makeshift, kacchha structure 500 metres inland last year.”

That entire stretch, where there were once houses and plots of agricultural land, has been swallowed up by the sea, including the house in which we had stayed. The couple who lived there have moved further inland. It’s getting increasingly difficult to find land to move inwards; many families are forced to leave. It’s affected the number of kids in the school. It used to have 250 students a few years ago. “We are now down to 140 students as families leave the island,” the teacher said.

The canary on the coast

The reasons underlying this constant swallowing of land, homes and other structures by the sea are well known by now. Or should be. Over 90% of all the excess energy trapped by greenhouse gases is taken up by ocean waters because of the greater capacity of water to absorb heat. Just the top layer of the oceans take up excess heat equal to 40 times the entire annual energy consumption of the United States. On an average, ocean waters worldwide have warmed by 0.4 degrees Celsius over the past 40 years. Warmer waters tend to rise, and hence keep advancing further up the slopes of seabeds. A second factor is ice melting from glaciers worldwide and the great ice sheets on Greenland and West Antarctica. These factors have caused sea level rise to occur at a little over 3 millimetres a year on average worldwide, but for reasons specific to its shape, this rise is much higher in the Sunderbans. And to this one must add the fact that the landmass in the delta itself has been subsiding at an average of 2.5 mm a year, as a paper published in Climatic Change in August last year stated. But sea level rise caused by global warming is getting more weighty as a factor here.

But the key point is also this: what has befallen Boatkhali Kadambini Primary School is a warning for us all – in the near future, all structures, agricultural lands, and the millions of residents all along India’s 7,500 kilometre coastline will also be at heightened risk. The reason is that while sea level rise in the past has been caused primarily by warmer waters, it is now being fed increasingly by melting ice. The climate scientist James Hansen has been writing for years that sea level rise this century will occur at an accelerating pace due to a non-linear melting of the gigantic ice sheets on Antarctica and Greenland. In 2014, a group of 90 scientists from 18 countries, including some of the world’s pre-eminent oceanographers who research sea level rise, issued a public statement that sea level rise would be significantly higher than the IPCC had predicted in its latest report. In the near future – I put it at not more than 20 years – the current rate of sea level rise in the Sunderbans will occur at hundreds of places in India. Sunderbans is like the canary in the coal mine, doing us a favour by providing advance warnings, to which we are not paying sufficient heed.

Do we have a plan?

The embankment you can see in the photo is now long gone. “We need a big baandh built here, but the government is doing nothing,” the school teachers said a few days ago. This is a repeated refrain across different islands of the Sunderbans: the demand for embankments where they don’t exist, and for sturdier embankments made of stone and concrete where mud embankments do. This is surely a reasonable demand for the well-being of the kids at Boatkhali primary school and for lakhs of others on islands in the Sunderbans, for building proper embankments is a matter of investing resources and using them properly.

A recent book by Aditya Ghosh, Sustainability Conflicts in Coastal India, reveals the complex reasons and collusions that interfere with durable embankments being constructed. But this hurdle is scarcely insurmountable or generalisable: sturdier coastal embankments have been built elsewhere, for instance by the Water Resources Department of the government of Odisha. 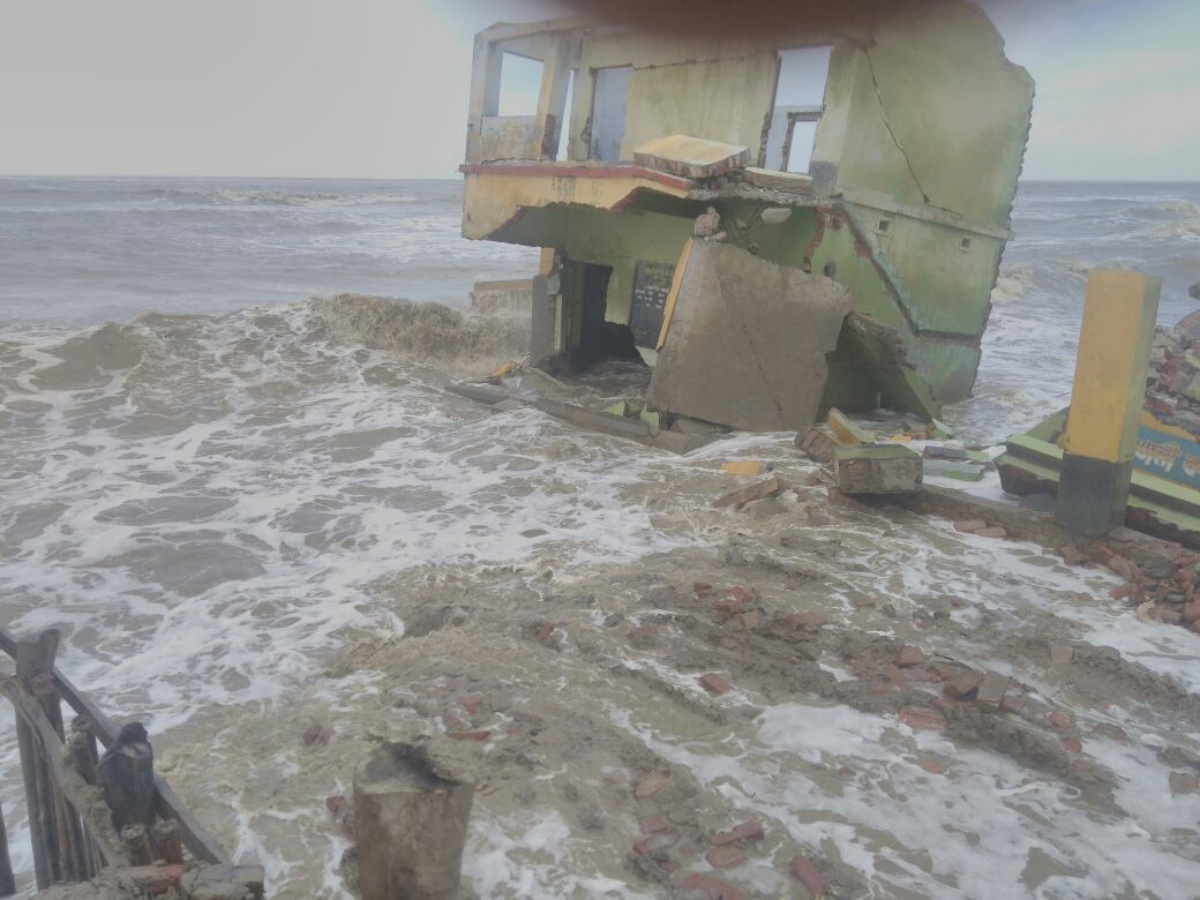 But the issue facing us all is a broader one. The social effects of the advancing waters that Sunderbans is experiencing today – destroyed buildings, saline agricultural lands, useless water bodies, damaged livelihoods, and forced migration in the tens of thousands – will unfold on this scale in innumerable places along both our coasts tomorrow. Do we have a broader plan for the medium term, given that an estimated 320 million people live within a few kilometres of our coastlines, and given that a sizeable number of them, in the millions, may face forced relocation as is happening today in the Sunderbans? The reality of our politics suggests that sturdier embankments will get built only where the large coastal cities or important towns are located, or where there are structures significant for the economy (ports and power plants), or for an increasingly lucrative coastal tourism. The people in fishing and other villages will be the poorer cousins, fobbed off with fragile earthen embankments at best or forced to relocate.

A long-term plan needs to go beyond building embankments. We would need to work with nature, not against it. A November 2017 report, Occupation of the Coast, by PSA’s Research Collective examines how the government seems to be going in the opposite direction with its massive Sagarmala Programme. Sagarmala envisages around 400 coastal projects – new ports, coastal industrial zones that includes mega thermal power projects, refineries, chemical plants, ship-breaking yards, automotive projects, and more. While its employment benefits are undeniable, surely it is monumentally foolhardy given the definitely advancing sea. We instead need a long-term plan to regenerate mangroves, not destroy them, to break the force of advancing waters or cushion us during storm surges. We need to treasure our wetlands, not build over them as is happening with Ennore Creek in Chennai and innumerable other wetlands along India’s coasts. We need to pay heed to the lessons Boatkhali Kadambini Primary School is teaching us, not slide into climate chaos with our eyes tightly shut.

Nagraj Adve’s booklet Global Warming in the Indian Context has been translated into Hindi, Kannada and Tamil. He works and writes on issues related to global warming. He may be reached  at nagraj.adve@gmail.com.