While reforms have been enacted, the regulations are unclear and full of loopholes that allows operators to lawfully engage in unsustainable, polluting mining. 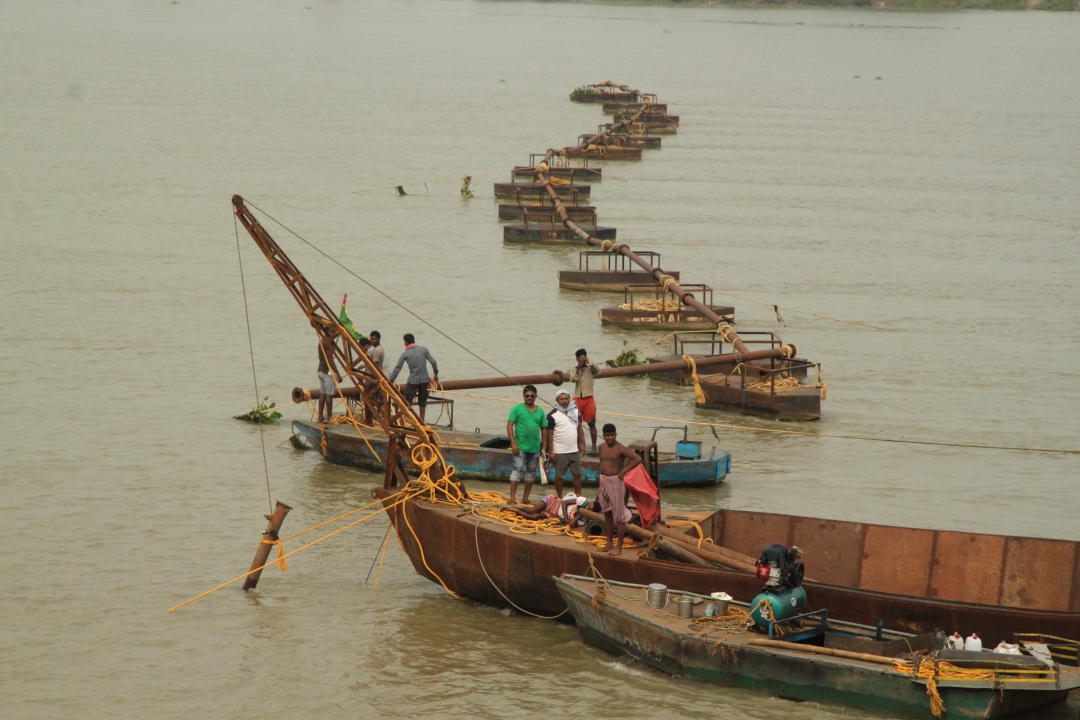 Illegal sand mining is a rampant problem in the riverbed of the Ganga and along its banks, as seen on the stretch right in front of the Tribeni thermal power station in West Bengal. Photo: Image by Beth Walker

Large tractors, diggers and trucks can be seen lined along many of the rivers in West Bengal. Sand is an essential raw material for the ever-hungry real estate and construction sectors, and driven by such demands, many of the rivers have been transformed through indiscriminate sand mining to feed this industry. Stories of violence and death associated with the “sand mafia” have been frequent in several districts in the state.

Indiscriminate sand mining has devastating effects on the environment. Its impacts can reduce river water flow that many farmers and rural communities depend on as a lifeline. Sand mining can change the shape and form of rivers, increasing flood risks and the safety of structures such as bridges. It can negatively impact groundwater quantity and quality, the primary water source of millions in West Bengal.

While this has prompted a rethink in the US and Europe, in South Asia sediment, especially sand, remains a product to extract, making it one of the main reasons why rivers like the Ganga are threatened.

How much do the new rules change?

After a long delay the state government enacted the West Bengal Minor Mineral Concession Rules 2016 (“Rules”). The Rules are a result of the directions of the Supreme Court and the National Green Tribunal over the last few years. They reflect a process of reform that a number of states in India are now undergoing. However, the new Rules and surrounding regime have a number of critical gaps and issues. This will ultimately mean that unsustainable sand mining continues.

The environmental provisions in the new Rules are drafted using broad and vague wording, rendering them toothless. For example, under the Rules mining leaseholders shall take “all possible precautions for the protection of environment and control of pollution…in the area for which the lease of licence is granted” (Rule 24). A rule obliging the “protection of environment” is so broad it is practically meaningless. Furthermore, the rule is arguably only protecting environmental damage at the mining site, rather than damage up or downstream from mining activity (which is often the case).

These Rules also fail to make the connection with laws relating to different forms of pollution, such as air pollution, noise pollution and the discharge of effluents into water. Now are the Rules specific enough to have firm obligations on sand mining leaseholders. They just say that such forms of pollution do occur and that leaseholders shall “take all possible precautions” conforming to standards and rules otherwise in existence. There is no mention of water pollution, groundwater and river flows, in a situation where riverbed mining’s worst impacts are on water quality, groundwater availability and downstream river water availability.

The Rules also have loopholes that allow circumvention from environmental compliance. For example, there is provision for a “short-term mining licence” that allows for a total exemption from social and environmental safeguards that are provided in the Rules. Such licences are exempt from any of the environmental aspects, including getting environment clearance or producing a mining plan. Not requiring environmental clearance is direct contravention of the Supreme Court decision in Deepak Kumar vs State of Haryana – a comprehensive judgement in 2012 that remains honoured mostly in the breach. While the Rules declare that short-term mining licences are to be given only under “exceptional circumstances”, this is a meaningless phrase as the Rules also state such licences can be given for “any reason” as long as it is “stated in writing”.

A lack of monitoring and enforcement

The weak environmental conditions are coupled with lack of adequate monitoring and enforcement, one of the major reasons why environment protection laws are not implemented in India as they should be. Without monitoring and enforcement, how does anyone know whether the correct amount of sand was mined, according to the terms of the lease? Or whether all precautions have been taken? The Rules are silent on these aspects.

In effect, monitoring and enforcement is the role of a number of government bodies, each saddled with particular areas of responsibility. A lack of coordination between different departments has been a long-standing issue in environmental governance in India. Such a monitoring and enforcement regime is not a robust way forward for an industry that is notorious for its social and environmental effects. The Rules also fail to spell out any penalties for breaches of environmental conditions. Whilst there are penalties listed for unauthorised mining (without a lease or licence) and other activities, the Rules are silent about leaseholders who breach environmental provisions.

In principle, decentralisation is not a bad idea. However, a number of issues arise with how decentralisation of environmental clearances has been carried out. The District Environmental Impact Authority (DEIA) issues environmental clearances for mining under 25 hectares. The DEIA is made up of four members, three of whom are from the district administration. The DEIA is effectively an extension of the district and state administration, which also has a pecuniary interest in generating royalties from mining leases. Apart from this, the lack of expertise of these officials was also subjected to litigation in the National Green Tribunal.

A better approach would have been for this authority to have involvement of residents directly affected by mining activities and independent scientific experts. A more diverse membership would have been beneficial to ensuring sustainability and given more credibility that the EC process is not a mere administrative formality.

The new Rules and regime represent a formalisation of sand mining and will likely reduce illegal mining and associated violence. However, ensuring the sustainability of rivers and areas near rivers will require a much stronger approach.

Moreover, while sand mining has operated indiscriminately and illegally through several relatively small groups, the formalisation will probably see larger companies entering the industry in West Bengal. This is already being seen in many parts of the state. For example, the Tata group has been given the nod to mine in Purulia district.

Birsha Ohdedar is a PhD Candidate at the law, environment and development department in the School of Oriental and African Studies (SOAS), University of London. His research examines the human right to water in India, in the context of climate change.