How the Sahara Turned From Lush Paradise to Barren Desert

The vegetation of the Sahara was highly diverse and included species commonly found on the margins of today’s rainforests along with desert-adapted plants. 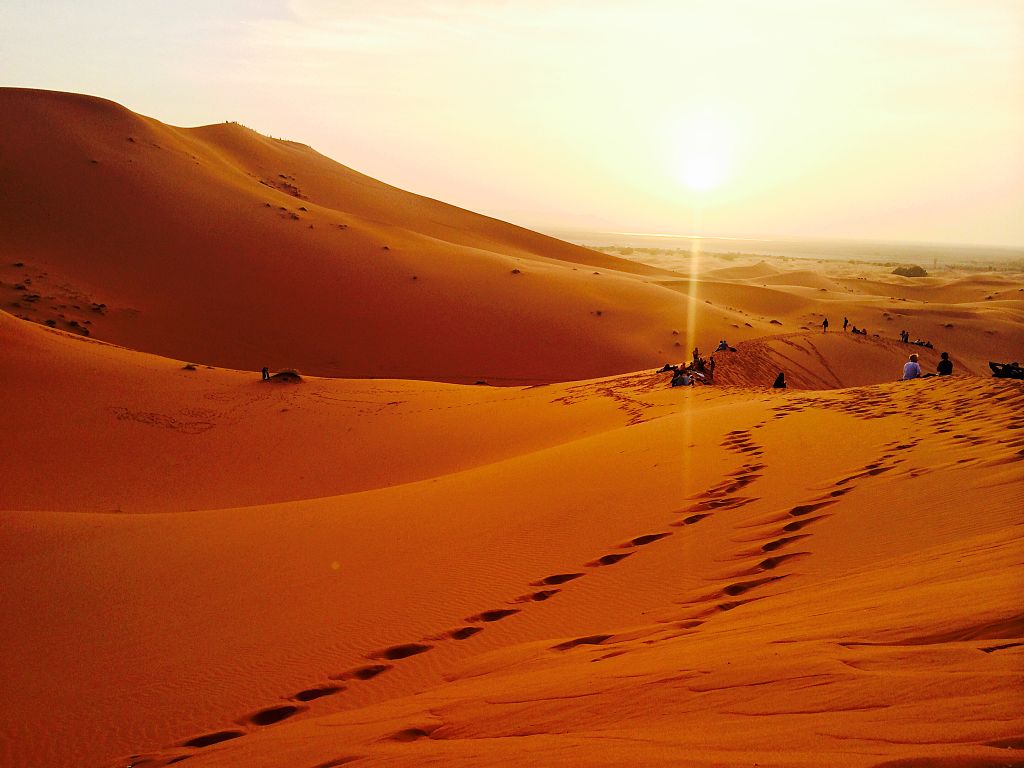 The sun sets over the Sahara. Credit: Wikimedia Commons

Once upon a time, the Sahara was green. There were vast lakes. Hippos and giraffe lived there, and large human populations of fishers foraged for food alongside the lakeshores.

The “African Humid Period” or “Green Sahara” was a time between 11,000 and 4,000 years ago when significantly more rain fell across the northern two-thirds of Africa than it does today.

The vegetation of the Sahara was highly diverse and included species commonly found on the margins of today’s rainforests along with desert-adapted plants. It was a highly productive and predictable ecosystem in which hunter-gatherers appear to have flourished.

These conditions stand in marked contrast to the current climate of northern Africa. Today, the Sahara is the largest hot desert in the world. It lies in the subtropical latitudes dominated by high-pressure ridges, where the atmospheric pressure at the Earth’s surface is greater than the surrounding environment. These ridges inhibit the flow of moist air inland.

How the Sahara became a desert

The stark difference between 10,000 years ago and now largely exists due to changing orbital conditions of the earth – the wobble of the earth on its axis and within its orbit relative to the sun.

But this period ended erratically. In some areas of northern Africa, the transition from wet to dry conditions occurred slowly; in others it seems to have happened abruptly. This pattern does not conform to expectations of changing orbital conditions, since such changes are slow and linear.

The most commonly accepted theory about this shift holds that devegetation of the landscape meant that more light reflected off the ground surface (a process known as albedo), helping to create the high-pressure ridge that dominates today’s Sahara.

But what caused the initial devegetation? That’s uncertain, in part because the area involved with studying the effects is so vast. But my recent paper presents evidence that areas where the Sahara dried out quickly, happen to be the same areas where domesticated animals first appeared. At this time, where there is evidence to show it, we can see that the vegetation changes from grasslands into scrublands.

If my hypothesis is correct, the initial agents of change were humans, who initiated a process that cascaded across the landscape until the region crossed an ecological threshold. This worked in tandem with orbital changes, which pushed ecosystems to the brink.

There’s a problem with testing my hypothesis – datasets are scarce. Combined ecological and archaeological research across northern Africa is rarely undertaken.

But well-tested comparisons abound in prehistoric and historic records from across the world. Early Neolithic farmers of northern Europe, China and southwestern Asia are documented as significantly deforesting their environments.

In the case of East Asia, nomadic herders are believed to have intensively grazed the landscape 6,000 years ago to the point of reducing evapo-transpiration – the process which allows clouds to form – from the grasslands, which weakened monsoon rainfall.

Their burning and land-clearance practices were so unprecedented that they triggered significant alterations to the relationship between the land and the atmosphere that were measurable within hundreds of years of their introduction.

Similar dynamics occurred when domesticated animals were introduced to New Zealand and North America upon initial settlement by Europeans in the 1800s – only in these instances they were documented and quantified by historical ecologists.

Landscape burning has been occurring for millions of years. Old World landscapes have hosted humans for more than a million years and wild grazing animals for more than 20 million years. Orbitally induced changes in the climate are as old as the earth’s climate systems themselves.

So what made the difference in the Sahara? A theory called the “ecology of fear” may contribute something to this discussion. Ecologists recognise that the behaviour of predatory animals toward their prey has a significant impact on landscape processes. For example, deer will avoid spending significant time in open landscapes because it makes them easy targets for predators (including humans).

If you remove the threat of predation, the prey behave differently. In Yellowstone National Park, the absence of predators is argued to have changed grazers’ habits. Prey felt more comfortable grazing alongside the exposed riverbanks, which increased the erosion in those areas. The reintroduction of wolves into the ecosystem completely shifted this dynamic and forests regenerated within several years. By altering the “fear-based ecology”, significant changes in landscape processes are known to follow.

The introduction of livestock to the Sahara may have had a similar effect. Landscape burning has a deep history in the few places in which it has been tested in the Sahara. But the primary difference between pre-Neolithic and post-Neolithic burning is that the ecology of fear was altered.

Most grazing animals will avoid landscapes that have been burned, not only because the food resources there are relatively low, but also because of exposure to predators. Scorched landscapes present high risks and low rewards.

But with humans guiding them, domesticated animals are not subject to the same dynamics between predator and prey. They can be led into recently burned areas where the grasses will be preferentially selected to eat and the shrubs will be left alone. Over the succeeding period of landscape regeneration, the less palatable scrubland will grow faster than succulent grasslands – and, thus, the landscape has crossed a threshold.

I tested this hypothesis by correlating the occurrences and effects of early livestock introduction across the region, but more detailed paleoecological research is needed. If proven, the theory would explain the patchy nature of the transition from wet to dry conditions across northern Africa.

Although more work remains, the potential of humans to profoundly alter ecosystems should send a powerful message to modern societies.

More than 35% of the world’s population lives in dryland ecosystems, and these landscapes must be carefully managed if they are to sustain human life. The end of the African Humid Period is a lesson for modern societies living on drylands: if you strip the vegetation, you alter the land-atmosphere dynamics, and rainfall is likely to diminish.

This is precisely what the historic records of rainfall and vegetation in the south-western desert of the US demonstrates, though the precise causes remain speculative.

In the meantime, we must balance economic development against environmental stewardship. Historical ecology teaches us that when an ecological threshold is crossed, we cannot go back. There are no second chances, so the long-term viability of 35% of humanity rests on maintaining the landscapes where they live. Otherwise we may be creating more Sahara Deserts, all around the world.