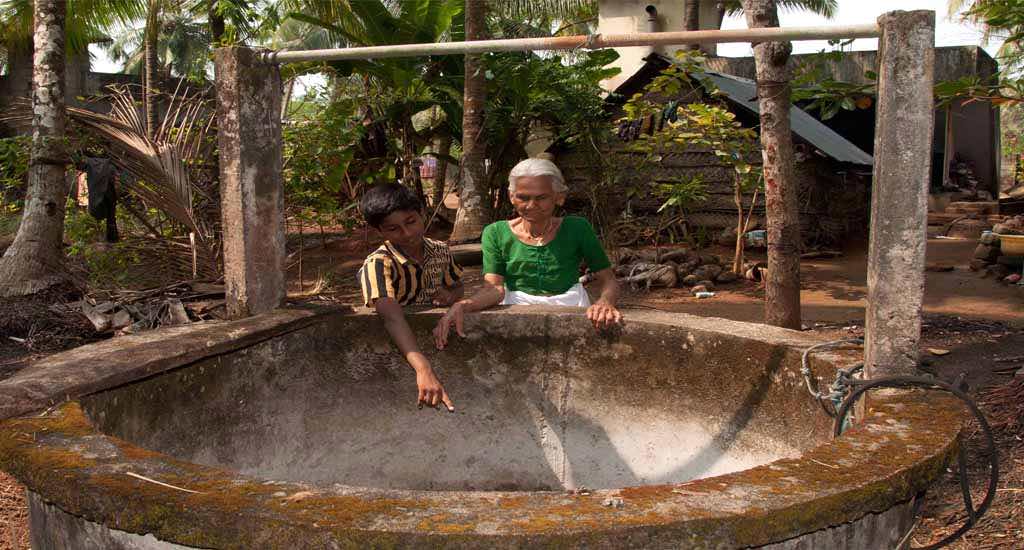 Madhavi of Chakkamkandam village has seen the pristine backwaters turn into a cesspool, contaminating even their open wells. Credit: Arun P.J./VillageSquare

Chakkamkandam is a village in the backwaters near Guruvayur, the renowned temple town in Kerala’s Thrissur district. With nearly 40 million people visiting the temple every year, the Sreekrishna Temple in Guruvayur is the fourth largest temple in terms of number of visitors.

Hundreds of hotels, restaurants, service apartments and resorts cater to the needs of the visitors. Chakkamkandam is at the receiving end of the influx, with the villagers being affected by the sewage from the commercial establishments, and with no reprieve in sight.

Recalling the days of her youth, 86-year-old Madhavi said, “The backwaters were crystal clear and aquatic life was so rich that we would catch fish when we dipped our pots to collect water.” Villagers practiced capture fisheries.

Paddy cultivation also flourished. Pokkali, an indigenous rice variety cultivated in saline, marshy coastal areas was the main crop grown in Chakkamkandam. “We called it pandipadam (Tamil fields) as the seeds had been brought from Tamil Nadu,” Madhavi told VillageSquare.in. The villagers used the silt from the backwaters as manure. They recall having fish and rice in plenty.

At the receiving end

Valiyathodu and Cheriyathodu are two natural freshwater channels in Guruvayur that run for 3km through the town before joining Chakkamkandam backwaters. Though the Municipality Act insists on complete waste management at source, the commercial establishments let the raw sewage into the two channels and dump waste too. Once the lifeline of Guruvayur town, the channels have been reduced to sewage lines.

Now the channels carry all the sewage and deposit it in the backwaters. When it rains, the entire area gets covered with thick, black slush as the channels overflow. In short, Chakkamkandam people have been suffering for many years. 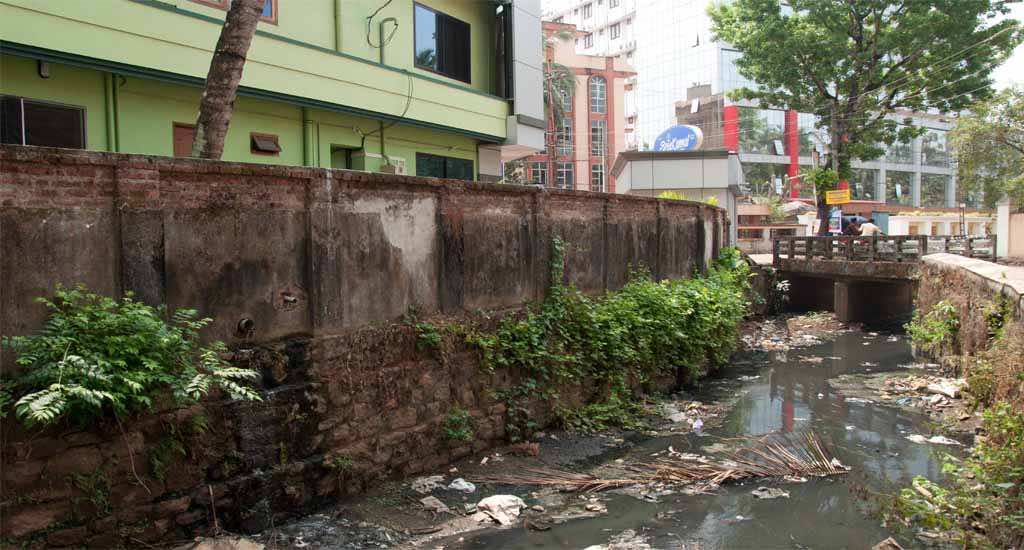 With hotels and restaurants in Guruvayur dumping waste and letting raw sewage, the natural channels have been reduced to sewage lines. Credit: Arun P.J./VillageSquare

Public and private institutions from the state and national levels tested the drinking water of Chakkamkandam and adjacent areas several times. The results always showed fecal contamination with very high count of coliform bacteria in all water bodies including ponds and domestic wells.

With irregular piped water supply, the villagers are left with no option but to use the contaminated water. For four decades, around 5,000 families living in both sides of the backwaters have been demanding potable water.

A few other localities of Guruvayur and Chavakkad municipalities, and Orumanayur and Pavaratti panchayats also suffer the consequences of untreated sewage being let into the water courses.

Is treatment plant the solution?

Chakkamkandam was part of Thykkad panchayat, but was later brought under Guruvayur municipality. The municipal authorities proposed a sewage treatment plant (STP) at Chakkamkandam as the solution. Chakkamkandam being a densely populated village with a fragile ecosystem, the villagers opposed.

“Chakkamkandam backwater is a part of the Thrissur wetland and they will have to fill one hectare of wetland for the plant,” K.U. Karthikeyan, secretary of Civic Rights Forum told VillageSquare.in. “The mangroves of the entire area will be destroyed.”

Petitions to the administration, campaigns and public protests went in vain. The administration started work on the STP. “The pipes would have reached the end of their lifespan by now, as the plant was proposed way back in 1974 and the main pipes were laid then,” said Karthikeyan. The work is yet to be completed.

Majority of the Chakkamkandam population, including children and the elderly, suffer from skin diseases and breathing problems.

The coastal stretches were once dotted with plenty of coir units. Coir retting and spinning provided livelihood for the villagers. About 35 years ago, coir and coir products from this area were transported to Alapuzha in small boats. “Most of the units have been closed down as no one wants to step into the dirty water to soak the husk for curing,” said Madhavi. 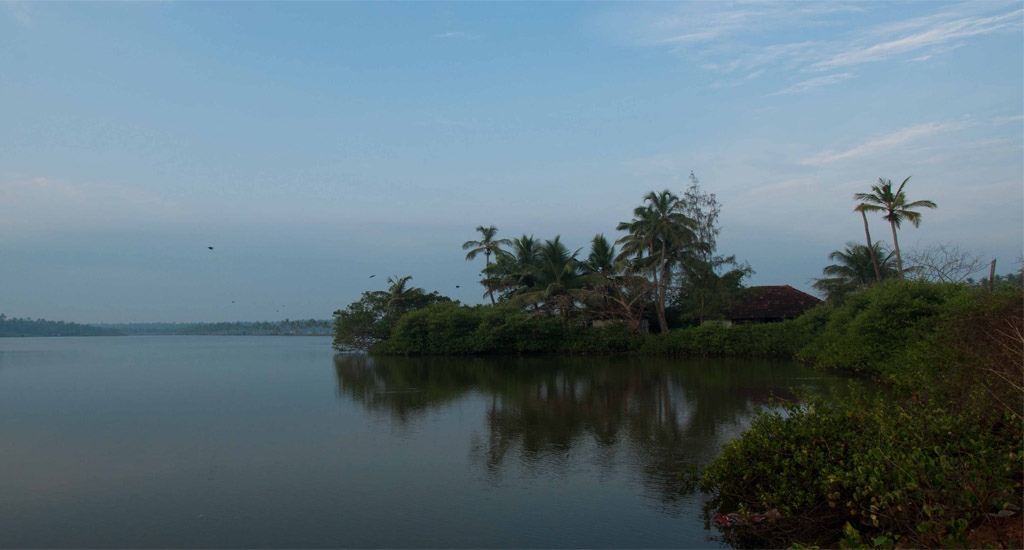 Backwaters of Chakkamkandam that appear picture perfect are actually polluted and contaminated by the raw sewage from nearby Guruvayur temple town. Credit: Arun P.J./VillageSquare

“Though centralised STPs are not successful anywhere, the authorities maintain that they would solve the problem,” C.F. George, one of the anti-STP campaigners told VillageSquare.in. Those protesting the STP point out that the courts cannot intervene now, as the STP is neither completed nor commissioned.

According to a municipal official, the municipality gives building permits only if sanitary waste management plans are also included. “But we have no system to assess if the system is functioning or not, after the building is completed,” he told VillageSquare.in.

“Health department and the pollution control board need to look into these problems,” said Thekkumpuram. But officials in the departments concerned were reluctant to respond to the villagers’ pleas. In spite of two meetings with human rights commission also, the villagers say that there is no solution in sight to the decades-old problem.

The protestors allege power and politics behind the inaction. “Before we formed the Civic Rights Forum, we came together under Chakkamkandam Azhukkuchal Viruddha Samithi (Chakkamkandam STP protest) and raised our voices,” K.A. Sreedharan told VillageSquare.in. “But we, the village folks, are not influential and we are always defeated by influence, power and money.”

“The plant that has swallowed money by the millions, appears to have been abandoned now,” said Sreedharan. The villagers demand waste management at source. If that is not possible, they seek decentralised STPs to reduce the extent of environmental damage; so that their water sources would remain clean.

Chithra Ajith is a journalist based in Kozkikode in Kerala.