All four extant species of horseshoe crabs are imperilled, because of overfishing for use as food and bait, among other reasons.

A living fossil that is important to the food chain, horseshoe crabs have been crawling on the planet a couple of hundred million years before dinosaurs. Source: Flickr/Mike Mahaffie (CC BY-NC-ND 2.0)

In a mangrove clump in Balasore in coastal Odisha, a youth gingerly snips away at the tangles of a fishing net around an upturned crab-like struggling creature, as it desperately tries to flip itself over with rapid movements of its menacing-looking tail.

As soon as it’s free of the net, the youth, a member of the Balasore-based Association of Biodiversity Conservation and Research, gently sets the crab down in the muddy estuarine waters where it quietly glides away and disappears into the deep.

Related to spiders, this prehistoric creature is a horseshoe crab. A living fossil that is important to the food chain, horseshoe crabs (HSC) have been crawling on the planet a couple of hundred million years before dinosaurs. After 450 million years of survival and outliving dinosaurs, their numbers spread across four species, are now rapidly dwindling worldwide from a suite of threats.

According to the International Union for Conservation of Nature, all four extant species of horseshoe crabs are imperilled, because of overfishing for use as food and bait, production of biomedical products derived from their blood, and because of habitat loss or alteration due to shoreline development and armouring against coastal erosion.

They are commercially harvested (particularly in the US) by biomedical and cosmetic companies for their coveted blue blood, which is used to extract lysate, a chemical used to test for bacterial contaminants in injectable drugs or implants. 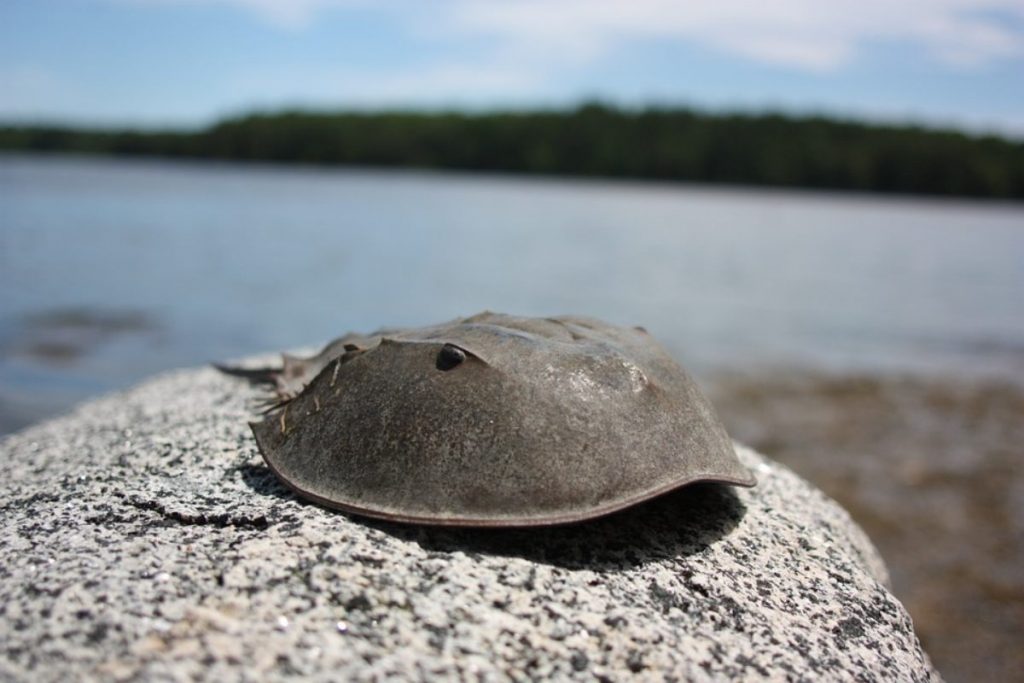 In India, habitat loss and non-target catch of HSC during traditional and semi-mechanised and mechanised fishing, are undoing its abiding presence, according to Zoological Survey of India scientist Basudev Tripathy. 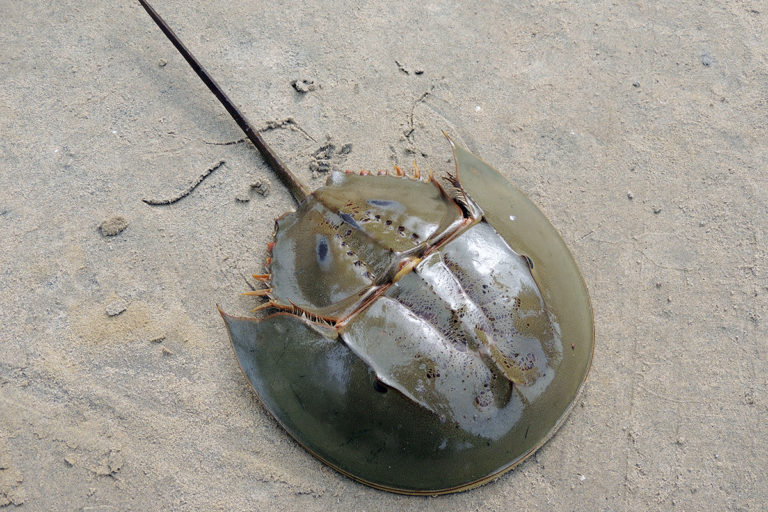 Nets and other threats to horseshoe crabs

Every full moon and new moon, they emerge from the depths, jostling to spawn amid the lapping waves along selected stretches of Odisha and West Bengal coast. They also occur sporadically along the coasts but the choice for these sites for occurrence and breeding is not known, explained Tripathy.

So intense is the pressure from the entanglement of individuals in nets along the shore, due to fishing activities, that in one survey in Ekakula and Balaramgadi in Odisha, Tripathy and co-authors documented over 95 percent of the recorded horseshoe crabs (both species) at Ekakula as dead. At Balaramgadi, only dead T. gigas were spotted, and abundance was found to be very low.

This year, the team at Association for Biodiversity Conservation and Research (ABCR) found multiple discarded fishing nets in the Khandia estuary shore in northern Odisha’s Balasore, which boasts of the highest horseshoe crab population in the state.

Many of these nets had trapped horseshoe crabs.

“On a recent survey, we were shocked to discover that there were more than 500 horseshoe crabs trapped in nets after a single day. About 300 were still alive and we managed to free them and release them back into the sea,” explained ABCR’s team leader and researcher Siddhartha Pati.

This is a common sight in Khandia estuary. “After bringing their boats to the shore, fishers leave their nets hanging in the water where they spread out and the crabs that come to the estuary to spawn are trapped in them. When the tide lowers, the crabs are left to die, trapped in the nets,” he said. “What is more pressing is the fact that the majority of them are females about to lay eggs,” Pati noted.

In the Sundarbans mangroves and islands in West Bengal, salinity intrusion and changes in mangrove vegetation are added challenges. “Unregulated tourism also poses a challenge to HSC in Sundarbans, especially in Sagar Island which had a sizeable population of HSC,” Indian Institutes of Science Education and Research (IISER) Kolkata scientist Punyasloke Bhadury told Mongabay-India.

The horseshoe crabs are also struggling with high predation pressure from wild animals. Pati, who steers community-driven art contests in Balasore to draw attention to the crabs, said local communities that revere the horseshoe crabs for its mythological importance can be tapped in for conservation.

“Many communities are not aware of the horseshoe crab’s ecological importance in signalling the health of oceans and sustaining the marine food chain which has resulted in indifference towards the crabs,” Pati said.

In addition, researchers said there are reports of crabs being traded and sold domestically in markets in the hinterlands of Jharkhand and coastal stretches of West Bengal for their medicinal (anti-rheumatic) properties.

“Recent reports suggest the crab is being trafficked during the night from Odisha coast to countries linked by the Bay of Bengal but detailed information about HSC smuggling routes and the people involved aren’t exactly known,” said Pati.

The crabs are fussy about their nesting habitats, according to B.P. Dash of the horseshoe crab research unit, department of bioscience and biotechnology, Fakir Mohan University, Balasore, Odisha.

“They come when salinity is just right for them and the sand is porous enough. Coastal developmental projects can bring about a change in these conditions and alter their breeding behaviour. We have observed that the breeding frequency decreases in the rainy season,” Dash said.

Tripathy recommended in-situ protection of habitats and declaring identified areas with a high population density of HSC as partially no-use zones, at least during the breeding season/duration of the HSC.

According to Zoological Survey of India there are 15 sites in Odisha and Bengal coast that are potential horseshoe crab habitats in need of protection. For West Bengal, there are seven sites where the population is at least more than 200 numbers and sees more than 10 mating pairs at one time. For Odisha, there are eight such spots.

“Besides, all along the coast including the above 15 sites, there are 35 sites identified as horseshoe crab habitats, where the number ranges between 1-50 individuals during the breeding season,” said Tripathy.

Despite the odds stacked against them, advocates have pinned hope on a mix of tactics to help the primordial ocean dweller survive.

Dash, for example, batted for laboratory-based artificial breeding and larval rearing of horseshoe crabs. In a sea ranching project launched in 2017 by the horseshoe crab research group, around 50,000 juveniles raised in the laboratories were released in the two years since the project’s inception.

Injured mature pairs are collected and maintained in the laboratory at standard temperature and salinity. Sperms and eggs are collected via electrical stimulation and then eggs are fertilised by spraying the sperms followed by addition of seawater.

“We have the capacity to carry out artificial insemination and incubating up to 1,000 eggs at one time in our lab set up. These eggs hatch after 30 to 40 days,” said Dash.

While the team is standardising procedures and protocols, Dash said there are challenges in rearing them in an artificial setup. 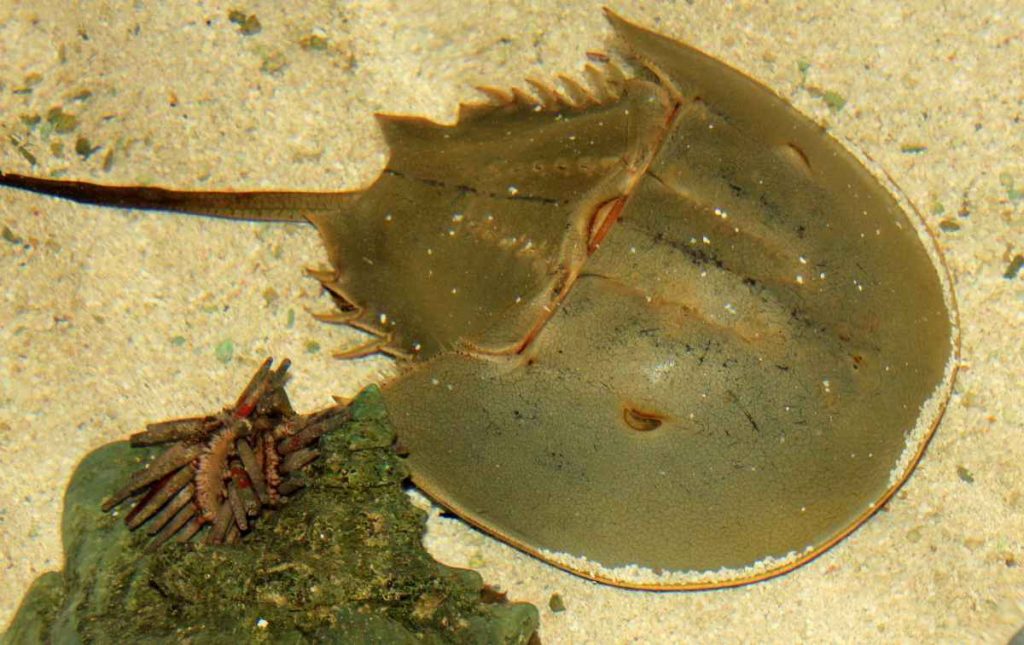 In a sea ranching project launched in 2017 by the horseshoe crab research group, around 50,000 juveniles raised in the laboratories were released in the two years since the project’s inception. Photo: Pixabay

“There are concerns as to the feed of the larvae and right conditions for its growth. Most importantly, we need to ramp up efforts to track and monitor these juveniles once they are released. We need follow-up studies and long-term monitoring. So far the research in India is not very cohesive and we need to collaborate with communities and conservationists,” said Dash.

Crowdsourcing knowledge to save crabs

To shore up efforts, researchers and grassroots workers have now come together under a common platform, the Indian Horseshoe Crab Network, an online platform for researchers working on the conservation of horseshoe crabs in the region.

“It brings together people working on several aspects such as habitats, the fisheries, community level linkages and other aspects of the conservation challenges pertaining to horseshoe crab such as linking the science of horseshoe crab with media,” said Bhadury.

Anwesha Ghosh of IISER Kolkata, who also helped float the network, expressed confidence in incremental conservation efforts. “It will not happen in one fell swoop and not by one individual, which is why it is essential to get everyone onboard,” Ghosh told Mongabay India.

The platform intends to provide timely updates on work being undertaken in this domain, sharing of field and laboratory experimental protocols related to horseshoe crab and habitats, publication resources as well as serving as a medium to establish collaborative research link among different groups, Bhadury explained.

Citizen science, rescue and rehabilitation efforts as that undertaken by ABC, sea ranching and release, bioprospecting and advancing research on the crabs are some of the subjects that have been raised by the network at its inception in April.

Former National Institute of Oceanography scientist Anil Chatterji, who collaborates with B.P. Dash on the sea ranching project, believes augmenting research on the horseshoe crab can aid in developing alternatives that will circumvent the need to harvest the organism.

“We have been putting in efforts to cultivate amoebocytes (motile cells that can differentiate into any other cell) in vitro and then removing the lysate for rapid detection kit,” said Chatterji.

“Besides this, my group has also been successful in producing celluloid liquid crystal based device for rapid diagnosis of bacteria in any biological materials. These two new modern technologies will help in conserving the horseshoe crab population, globally as in the future, blood from horseshoe crab will not be required,” Chatterji told Mongabay India.

Chatterji is working with Dash on characterisation of embryonic (peri-vitelline) fluid of its fertilised eggs for biomedical application.

“We have also successfully isolated growth factors useful in stem cell research. This is from the peri-vitelline fluid of developing eggs of the horseshoe crab. After characterisation, this factor will also be chemically synthesised and then commercialised. So for this research, we need not depend, in future, on horseshoe crab,” Chatterji said.

Dash added: “Biomedical importance apart, it is important to save them as they are an indicator species and signal the health of the oceans. They have evolutionary significance and have gained some advantages over the environmental changes in millions of years. We can learn a lot from them.”