How India Can Meet Its Ambitious Renewable Energy Targets

A systemic approach that focuses on enabling the environment for more renewable energy will help India to meet its target of generating 175 gigawatts of energy by 2021. 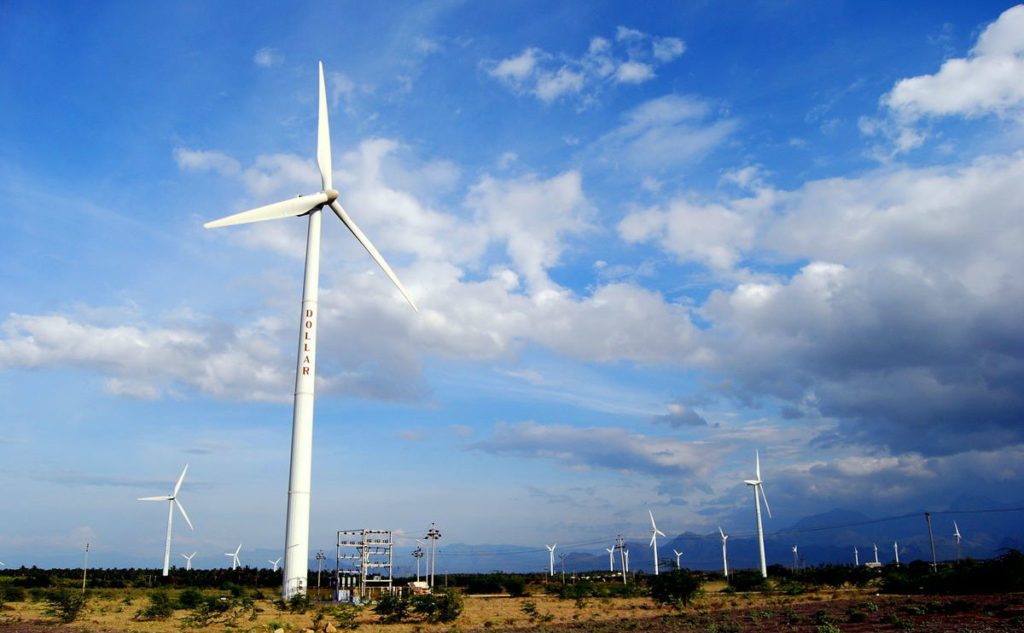 Windmills in Pollachi Kerala. Renewable energy in India has been focused largely on targets. Credit: Dhruvaraj S/Flickr CC BY 2.0

At the recently concluded Marrakesh Conference, most countries stood by their commitments made in Paris at COP21 for reducing carbon emissions. India’s ratification, on October 2, helped bring the treaty into force on November 4. A significant component of India’s voluntary goals is renewable energy (RE). India has a dedicated ministry for new and renewable energy (MNRE), but are Indians willing to pay for enhancing RE? While there is a lot of push from the government, are there enough pull factors for RE?

What else should we do if we’re serious about achieving or at least coming close to the ambitious target of 175 gigawatts (GW) of RE by 2021-2022 – a roughly five-fold growth from 2015? More than just a high growth rate, RE requires enormous investments because it is so capital-intensive (but with no fuel costs). The fact that RE worldwide requires support indicates that it’s not yet the cheapest option around.

While RE is valuable precisely because it uses no fuel — helping everything from sustainability to energy security — it has a number of challenges that are exacerbated by India’s requirements and specificities. Worldwide, the challenges with RE include variability, location-specificity, and economics – but in India, electricity deficits, land constraints, high-interest rates and a weak grid (without sufficient reserves or balancing options) are additional challenges. The two biggest challenges for RE in India are finance and grid integration.

Most financiers believe there is large global capital available if the investment makes sense. Low-interest rate debt could be unleashed, but these require US dollar (or similar) repayments — and thus a forex hedge — and far lower risks. Risks today primarily stem from off-taker risk, based on the poor finances of the distribution companies (DISCOMs) and utilities. A number of states, especially the forerunners for RE in India, have felt the need to slow down on RE development.

India can get really cheap RE by going after the really cheap debt available from sovereign, pension, and insurance funds. These sources seek relatively low returns but expect low risks as well. In fact, their order of priority is governance, risk, and returns – caring more about transparency and predictability than just the rate of return. In contrast, equity or first tranche finance worries about returns first and many low-cost RE projects assume that they can refinance the project when it becomes operational. Once operational, the risks are far lower and one can have, in theory, a steady cash flow similar to a rental property. India needs to focus on enabling this money turnover, with attractive norms for takeout financing (refinancing toward people with different risk/return profiles). There are other things India must also do like standardised contracting, risk pooling and credit enhancement.

In addition to operational fixes, India has to address fundamental challenges that will make the DISCOMs viable. The government’s DISCOM revamp scheme, UDAY, helps, but its impact will take time. The current trend of bypassing the state in RE projects by having multi-state or national solar parks only delays the inevitable. Similarly, pooled pricing for selling a package of RE plus traditional power helps liquidity (blending ‘expensive’ RE with traditional power) – but doesn’t address long-term issues of solvency. As a step toward improved DISCOMs, we at Brookings India have proposed updates to the ratings of DISCOMs, which recognise inherent differences between states. A state with 100% electrification, zero-load-shedding and high RE cannot be compared with so-called laggard states. 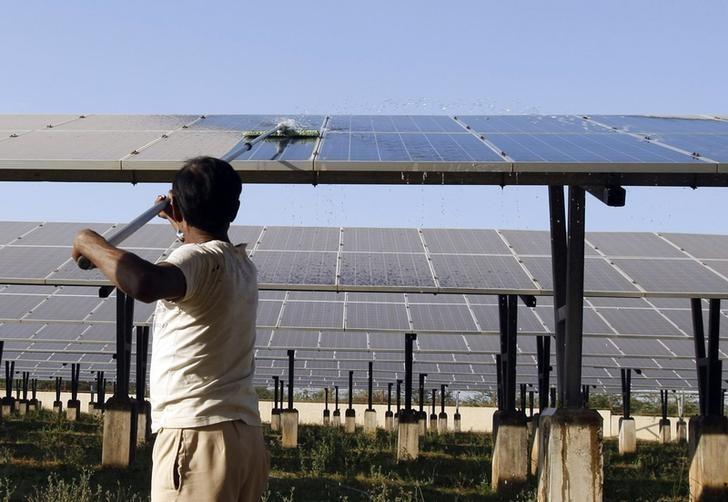 A worker cleans photovoltaic solar panels inside a solar power plant at Raisan village near Gandhinagar, in Gujarat, February 11, 2014. Renewable energy in India has been focused largely on targets. Credit: Amit Dave/Reuters/Files

From a grid operator’s perspective, RE isn’t controllable – it is use-it-or-lose-it. In addition, RE, especially solar, doesn’t help meet the peak demand, which is mostly in the evening in India. It’s also worth emphasising that a 1 kW solar system produces 1 kW output only in the middle of the day and in 24 hours, it doesn’t produce 24 kilowatt-hours (kWh), rather only about 5 kWh in reasonable locations. In technical terms, its capacity utilisation factor (CUF), also termed the plant load factor (PLF) is only about 19%. In contrast, a thermal power plant operates for 65-75% of the time, or at least could, depending on demand. What this ratio of three to four times in PLF means is that if we want to generate the same quantity of electricity, we’d need more than three times the capacity of solar power plants compared to coal. Thus, for Rs 1 crore of capital investment, traditional power systems can produce far more energy per year, even if the net costs per unit might be comparable.

Comparing RE costs is also a tricky business. We see headline news about solar power now being Rs 4.34 /kWh – not too different from coal. We have to ask what hidden support is or isn’t factored in – such as the need for increased transmission (more so than traditional plants require) which is offered for free. There may also be a need to generate alternative energy that can step up on demand when RE suddenly fails, not to mention peaking power, which is inherently more expensive. If a coal or other plant has to be built anyway, RE only helps the energy unit problem, but not the capacity problem. In fact, until India installs more peaking power plants (which operate only a few hours per day), all solar will do is displace coal power in the middle of the day.

There are other existing or proposed support mechanisms that need proper quantification. Socialisation of the costs only goes so far and may even become micro-economically inefficient. Stated another way, RE is easy to handle or even subsidise, as long as it is niche.

Trickier is the issue of how end-users become attracted to rooftop solar because they compare their end-user retail tariff with solar. All the headline numbers for the cost of solar are for bulk utility-scale generation. Commercial and industrial consumers overpay today (cross-subsidising other users), but comparing retail tariffs with wholesale (utility procurement) is inappropriate. End-users rely on opportunistic RE — use it when you can — but they still come back to the grid in the evening. This makes the rest of the grid more expensive. This is one of the several things we have to figure out to make RE scale in India.

If we don’t have the conversation as listed above, we face two specific risks. First, disruption to the traditional utility model as users – especially high-paying users – abandon or at least diminish the use of the grid. This is dubbed the ‘utility death spiral,’ whereas more people leave, the grid gets more expensive, prompting more people to leave or find alternatives, spiralling onwards. With improvements in RE, storage, smart grids and more, we face the risks of much more ‘uberisation’, or disruption from the edge. Second, if utilities find RE a threat, they will do everything they can to go slow, like for Open Access (users being able to choose their supplier). It was mandated under the electricity act 2003 for large users, but hasn’t taken off due to covert if not overt resistance by the states, often under the blanket of ‘grid security’.

India’s 25% annual targeted growth of RE dwarfs the 4-5% annual RE growth targeted in California, the European Union and China. I would suggest that India follow a more gradual, but sustainable trajectory for growth and certainly not one so front-loaded as the recent renewable purchase obligations (RPO) targets have suggested. Tying it back to financing, the money coming in must be patient money, relying on the yield it offers and not the appreciation via resale of the asset.

Are the targets simply aiming for the stars till they reach the moon, at least? Perhaps, but the downside of this approach is misallocation of resources and effort – notably in terms of transmission as well as under-investment on things like efficiency, peakers, smart grids.

A lot of people ask “how much RE can we handle”? The answer is: as much as you want, provided you put in the effort and investment. Grand targets push the envelope and I remain bullish as the costs continue to fall dramatically. In fact, in the long run, RE’s biggest competition will not be with fossil fuels, but with itself, from new RE some years hence.

I’m suggesting that RE for India should be not just targets, but a systemic approach: consistency, clarity and coordination. We need to work on enabling the environment for greater RE, which begins with better accounting, better system visibility, credible RE prediction, willingness to pay a premium for peaking or supporting power and consistent payment mechanisms. Once we achieve these, the market will automatically blossom more RE than predicted today.

Rahul Tongia is a fellow at Brookings India and chairs the working group on the policy of the clean energy finance forum, a multi-stakeholder body engaged on recommendations for enabling India’s RE ambitions. All views are personal.