Qatar’s Outdoor Air Conditioning Is Not the Real Climate Villain

If we’re concerned about who’s “making it worse” for Qataris, it would be shortsighted to ignore the West’s historically high emissions. 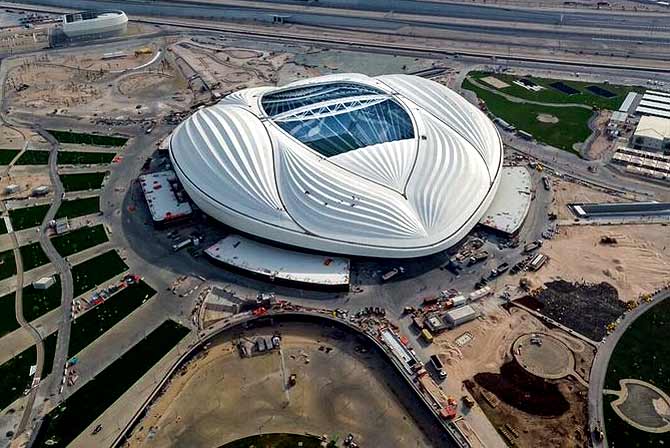 The Al Janoub stadium in Qatar, a 40,000 seat venue made to resemble the sail of a dhow, or traditional wooden sailboat. Photo: Mohammed bin Hamad/Twitter

Climate change is coming for everyone, but it’s coming much faster for some of us. People living in low-income communities are more likely to be affected by storms and floods exacerbated by climate change. Low-lying portions of island nations like the Maldives are projected to be uninhabitable by 2100, and researchers worry that the combination of high temperatures and humidity levels in South Asia and the Persian Gulf could make those regions virtually unliveable.

Qatar, in particular, has recently been the subject of interest in Western media. A recent Washington Post piece reported that Qataris have taken to air conditioning outside spaces, like restaurant patios and sports stadiums built for the 2022 World Cup. Air conditioning, the author wrote, is a “vicious cycle” – the energy required to run AC outdoors requires emissions, which in turn feeds climate change. GQ picked up the news, calling it “environmental lunacy.” One popular tweet linking to the piece says that by running air conditioning, Qataris are “making the heat worse as they try to cool off.”

This is a convenient narrative for Westerners. It fits into the existing framework of North American discourse about climate change (hot places will get hotter!), and readers in cooler climes get to feel concerned, but in a self-righteous way – wow, look how bad things are getting all the way over there, and how those other people are making it worse for themselves!

Individual decisions do, in the aggregate, contribute to change. But telling people in 120-degree weather to avoid outdoor air conditioning obscures the real emissions culprits.

Outdoor air conditioning is nothing new. North Americans have used it for years in desert cities like Phoenix to make sitting outside bearable. As far back as 2008, Gizmodo’s Adam Frucci mocked outdoor air conditioners as “perhaps the most wasteful and idiotic product I’ve ever seen,” and in 2011, Phoenix restaurants began advertising air-conditioned patio tables. A 2015 trend piece recommends outdoor air conditioning for Arizona homeowners who “love their outdoor lifestyle” and want a solution for when “it gets a little too hot to sit outside on the covered patio.” Elsewhere in North America, patio sitters have the opposite problem: It’s too cold. Patio heaters, open fires, and gas- or electric-powered fire pits make sitting outdoors cosier.

While there are no direct comparisons of energy use between outdoor air conditioning and outdoor heating, both are inefficient. Valerie Thomas, a professor at Georgia Tech who studies energy and sustainable infrastructure, says calculating efficiency depends on the specific technology used as well as how often and for how long it’s used. A small patio heating system operates at about 1,000 watts and costs about $140, while larger units are 1,500 watts and cost around $200, says Thomas. She didn’t look into electric outdoor air conditioners specifically but says that most common patio-cooling devices, like swamp coolers or fans, use between 200 and 250 watts.

Based on that, Thomas says, “very, very approximately one might conclude that heating is somewhat more energy intense than cooling.” Yes, swamp coolers and fans aren’t the same as AC, but it appears some “high performance” portable air conditioners also use around 1,500 watts too. Yet amid discussions of climate change impacts in the US, I haven’t seen any hand-wringing over how Arizonans’ use of air conditioning or Californians’ use of patio heaters is “making it worse for themselves.”

Standard heating, ventilating, and air conditioning systems attempt to cool air in an enclosed space; that can be incredibly costly in enormous sports arenas like the Dallas Cowboys’ AT&T Stadium, which draws more energy than some midsize cities. Alternatively, the methods used in Qatar’s stadium designs focus on cooling the individual. The stadium cooling system’s designer claims that his invention uses just one-fifth the energy typically used to heat an airport atrium of around the same size, though there are no independent verifications of that calculation.

But let’s assume these outdoor cooling methods are woefully inefficient. Even then, how much Qataris are actually contributing to this “vicious cycle” of emissions is an open question. “Qatar emits a lot of greenhouse gases,” writes Post reporter Steven Mufson, noting that the country has the highest per capita emissions rate. “About 60 percent of the country’s electricity is used for cooling. By contrast, air conditioning accounts for barely 15 percent of U.S. electricity demand and less than 10 percent of China’s or India’s.” Comparing Qatar’s emissions or energy use to that of the US, China or India implies that these countries might be, well, comparable – but they are not.

Qatar is about the size of Connecticut and is home to about 2.6 million people. (Connecticut’s population, by the way, is around 3.5 million.) It’s responsible for less than 1% of global emissions, says Eri Saikawa, an associate professor at Emory University who studies emissions. “Qatar’s emissions as a whole are very small,” she told me. And the energy devoted to cooling makes sense too, considering the weather. “It seems a bit like an unfair comparison to me,” she says.

Consider this chart from Climate Watch for a visual representation of how the United States’ total emissions have dwarfed Qatar’s for 25 years; the default settings for the y-axis make it look like Qatar’s emissions are essentially zero compared with the roughly 6.0 gigatons the US emits each year. Just comparing the most recent figures, from 2014, Qatar emitted 88 megatons, while the US emitted 6.3 gigatons (equivalent to 6,300 megatons) – Qatar’s emissions were just 0.01% of the United States’.

It’s true that, as Mufson writes, Qatar has the highest per capita emissions rate. According to data from the World Bank, the average Qatari produces 2.74 times the emissions of an average American and nearly 5.8 times that of an average Chinese citizen. But that’s not all, or even mostly, because of cooling costs – the large amounts of liquefied natural gas the country exports count as Qatar’s emissions footprint, rather than that of the countries to which it exports, like China and India.

Also read | Venice, the Apocalypse and an Opera

If we’re concerned about who’s “making it worse” for Qataris, it would be shortsighted to ignore the West’s historically high emissions. The six countries with top emissions in 1850 – the US, the EU, China, Germany, India and Russia –are still top emitters. Between 1990 and 2014, the US and Canada topped the list of the world’s biggest per capita emitters. “The US has been emitting so much that they have some responsibility to bear for historical emissions,” says Saikawa.

The cumulative contributions of these high-emitting countries are many tens of thousands of times what Qataris are using annually to stay cool. Even if Qataris completely stopped using air conditioning, it would take a long time for the change to make an impact, says Saikawa. “If they are going to stop for a hundred years, of course, that could potentially count, but in the current grand scheme of things, there is so much more we can do,” like reducing coal-based emissions and more effectively using solar energy.

The Qataris have considered this. In the Post piece, the author interviews Abdulla al-Mannai, director of the Qatar Meteorology Department.

“I often get asked: ‘Can we reverse whatever is happening in the climate?’ ” Mannai said in an email. “I ask: Can you turn off air conditioning and refrigeration and stop using cars? Nobody will say yes.”

“Nobody” includes all of us, not just Qataris. Christopher Groves, a research fellow at Cardiff University, has studied energy justice and the role of identity and culture in people’s energy use. One paper he wrote in collaboration with other Cardiff researchers features an interview with a woman named Lucy from Wales who uses the opposite of the Qataris’ kind of outdoor climate control: a patio heater. Lucy had moved from the city into the country and said she knew the heater was wasteful, but she wanted her friends from the city to come visit and feel at home.

“Ways of using energy that might otherwise be seen as wasteful are – in Lucy’s case but also in the Qatari context – seen as justifiable because of the ways they symbolise material abundance and luxury,” says Groves. “There are situations where waste is seen almost as morally necessary to support a valued way of life.”

Groves asks if it’s fair to ask people to give up these values – and, more importantly, what might convince people to change their behaviour. Lucy, for instance, mentioned that her neighbours also used wasteful means of heat production, like burning wood in open fires, and that those practices were part of the community. “Motivation for giving that up has to come, ideally, from within the community to which someone has essential attachments,” says Groves. “Simply demanding, from an external vantage point, that things have to change generally doesn’t work.” Giving up these pieces of identity “can be psychologically difficult.”

Also read | The Climate Crisis Is No Longer Your Grandchildren’s Problem. It’s Yours.

There’s been plenty of ink spilled suggesting that people forgo wasteful outdoor AC or shaming people for flying, eating meat, using plastic, buying new clothes, and using medically necessary inhalers or any number of inefficient but ubiquitous technologies out there, but the collective impact is still a drop in the bucket and, as Groves notes, unlikely to work without large-scale buy-in.

A 2017 report found that more than 70% of the world’s emissions since 1988 were traceable to just 100 companies. Comparatively, whether someone runs an outdoor air conditioning unit for an hour during a restaurant meal seems like a drop in a vast ocean of emissions.

What you can do: vote, organise, educate and, in whatever way you can, create dialogue around solutions that address systemic issues like moving away from coal-based power and incentivising more sustainable infrastructure investments. That’s not to let you off the hook for examining your own energy consumption. But policing others’ isn’t going to get us very far, both from the perspective of generating meaningful behavioural change or significant emissions reductions.