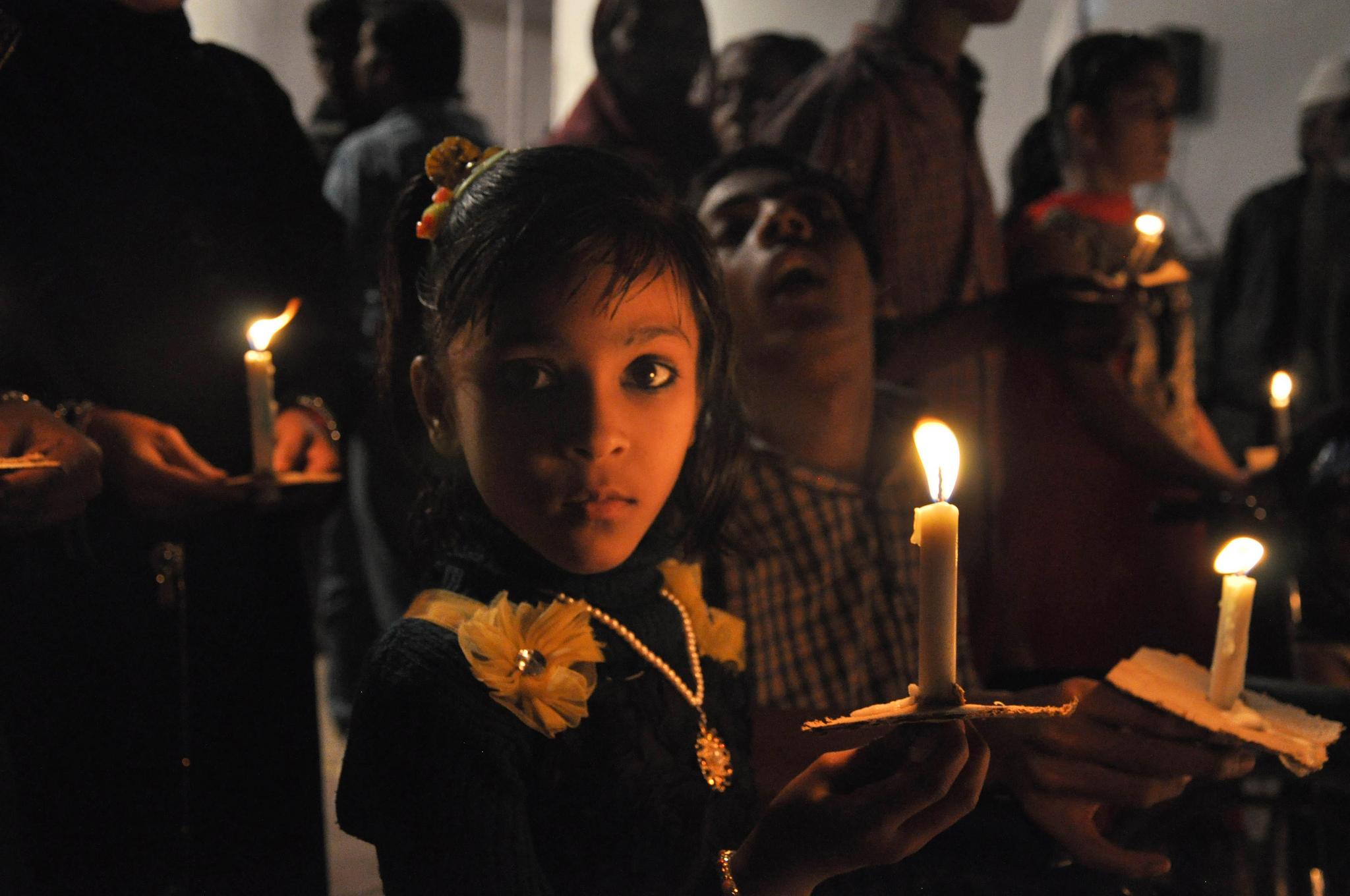 The half-hearted clean up of the contaminated site and inadequate health care for the survivors is now taking its toll on a new generation of victims. Credit: Bhopal Medical Appeal

Bhopal: A recent medical study has confirmed that the deadly gas that leaked from the Bhopal pesticide plant of the American multinational company Union Carbide 31 years ago is continuing to cripple the third generation of its survivors. The study, conducted by 30 doctors in the last three years, has found that ‘far too many children are being born with congenital malformations to parents with acute exposure to the toxic gas or chronic exposure to contaminated water compared to those who were not affected by either of the two’.

Bhopal was struck by the worst industrial disaster in the world on December 2, 1984, when 40 tonnes of poisonous Methyl Isocynate (MIC) gas leaked from the Union Carbide factory, killing over 3,500 people the same night and maiming more than 500,000 people. Thirty one years later, its effects are still visible in the children and grandchildren of those who survived.

The Sambhavna Trust Clinic, which sponsored the study, provided the researchers with information on diagnosed cases of TB, cancer, paralysis, reproductive health of women, physical growth, mental and social development of infants and children and birth defects. The study involved 20,000 families that were divided in four categories in equal numbers — exposed to the gas leak on December 2/3, 1984, exposed to the contaminated water around the defunct Union Carbide plant, exposed to both the gas and the contaminated water and unexposed to either the water or the gas.

Sambhavna’s research workers have identified over 2,500 children with possible birth defects and out of these over 1,700 were diagnosed with congenital anomaly.

Funds for running the Sambhavna Clinic come from donations by over 15,000 people from India and the UK. International bestselling writer Dominique Lapierre regularly contributes to the gynaecology clinic and the informal school run by Sambhavna.

Ritesh Pal, field coordinator for the research, says the study is expected to be published in international peer reviewed journals within the next six months. His colleague, Afreen said that so far 164 children with mental retardation, cerebral palsy, un-descended testes, polydactyly, syndactyly, torticollis and other congenital anomalies have been referred to government and non-government health care centres for medical and surgical treatment.

Activists in voluntary organisations working among the gas tragedy survivors, say many of the second and third generation children are born with congenital defects, cerebral palsy, and even cancer.

“Nearly 25,000 tonnes of toxic waste is lying in open at the solar evaporation pond, some 400 metres north of the Union Carbide plant. Dumped waste remains buried in the ground and it is polluting the environment even today,” Jabbar, a victim himself, adds.

In 2013 , two doctors – Dr Jyotirmay Samaddar and Dr Devendra Panchal – had concluded in their study of gas survivors’ children that ‘the probability of a baby being born with congenital anomalies is seven times higher in areas of Bhopal affected by the 1984 gas tragedy’.

As many as 3,000 newborns are either mentally or physically challenged and in many cases both, said Jyotirmay Samaddar, a doctor from Kolkata who has been working for the last 20 years with the victims of Bhopal gas tragedy.

According to the doctor-duo, out of the 20,000 families from the MIC-affected areas almost 3,000 children were born with serious deformities and a majority of them suffer from multiple deformities.

Samaddar also said that the ground water of the area had been steadily contaminated much before the disaster that struck on the night of December 2-3, 1984. Ever since the plant was established in 1969, it had been releasing toxic waste into the environment which gradually permeated below the soil and contaminated ground water. “The high rate of children with deformities is a collective result of poisonous water and air.”

The disused Union Carbide factory contains about 8,000 tonnes of carcinogenic chemicals which continue to leach and contaminate water supplies used by 30,000 local people. The clean-up has been stalled by a mixture of bureaucratic indifference, legal actions and rows over corporate responsibility.

Dow Chemicals, which bought Union Carbide in 2001, says it is not responsible, arguing that since the plant is on government land it is up to the state to clean it up. Finally, the government decided to get the toxic waste from the factory premises transported and incinerated in the industrial town Pithampur near Indore. The incineration process has begun.

Activist Satinath Sarangi, who runs the Sambhavna Trust Clinic, says that children conceived and born after the disaster to affected parents were significantly different from children of the same age born to unexposed parents. The affected children were shorter, thinner, lighter, and had smaller heads. They had abnormal growth in their upper bodies.

‘Research done in the past is insufficient and key aspects of the disaster and its aftermath have been ignored in the research projects.’ says Sarangi.

In the year 2002 a report published by the Fact-Finding Mission on Bhopal (FFMB) found a number of toxins, including mercury, lead, trichlorobenzene, dichloromethane and chloroform in the breast milk of nursing mothers. In 2009 the same body also took samples from a commonly used hand pump situated north of the plant and found that the water contained 1000 times the World Health Organisation’s recommended maximum amount of Carbon tetrachloride, a known carcinogen.

Studies have found a drastic increase in the number of babies born with physical as well as mental deformities. Children are born without arms or legs and are often unable to speak or care for themselves. Doctors in the region say that these deformities are very different from conventional birth defects and therefore very difficult to treat.

A 2003 study by the American Medical Association found that boys who were either exposed as toddlers to gases from the Bhopal pesticide plant or born to exposed parents were prone to “growth retardation”.

Women who were pregnant during or following the disaster had extremely high rates of spontaneous abortion. A 1985 study by Medico Friends Circle (MFC) found that in addition to spontaneous abortion and stillbirths, pregnant women exhibited diminished foetal movements and menstrual disturbances. Foetuses that survived the gas disaster suffered from severe malformations. Birth defects continue to occur among families affected by the gas leak and contamination of water at a higher-than-average rate even now.

Seven months after the explosion, the then union health minister reported that 36 women who had been pregnant at the time had spontaneously aborted, 21 babies had been born with deformities, and there had been 27 stillbirths, all believed to have been caused by the gas. Over the years children have been born with cleft lips and palates, and foreshortened limbs. Apart from high incidences of long-term respiratory problems and chronic lung diseases, myriad other illnesses have manifested, which Sarangi believes are directly attributable to the long-term effects of the gas.

The effects of the gas on the people of Bhopal have been nothing short of catastrophic.

The Indian Council of Medical Research (ICMR) had initiated 18 studies in the aftermath of the Bhopal disaster. However, despite findings of long-term damage to the survivors, these studies were prematurely ended within 10 years. Most studies done by the ICMR were terminated as early as 1989 and the rest by 1994 without reviewing the collected data. The ICMR’s full report on Bhopal has not been released as yet.