When a Polluted River Floods, the Groundwater Becomes Polluted Too

“Sewage must have washed off with flood water, which in turn inundates the wells that would have resulted in contaminating the groundwater.” 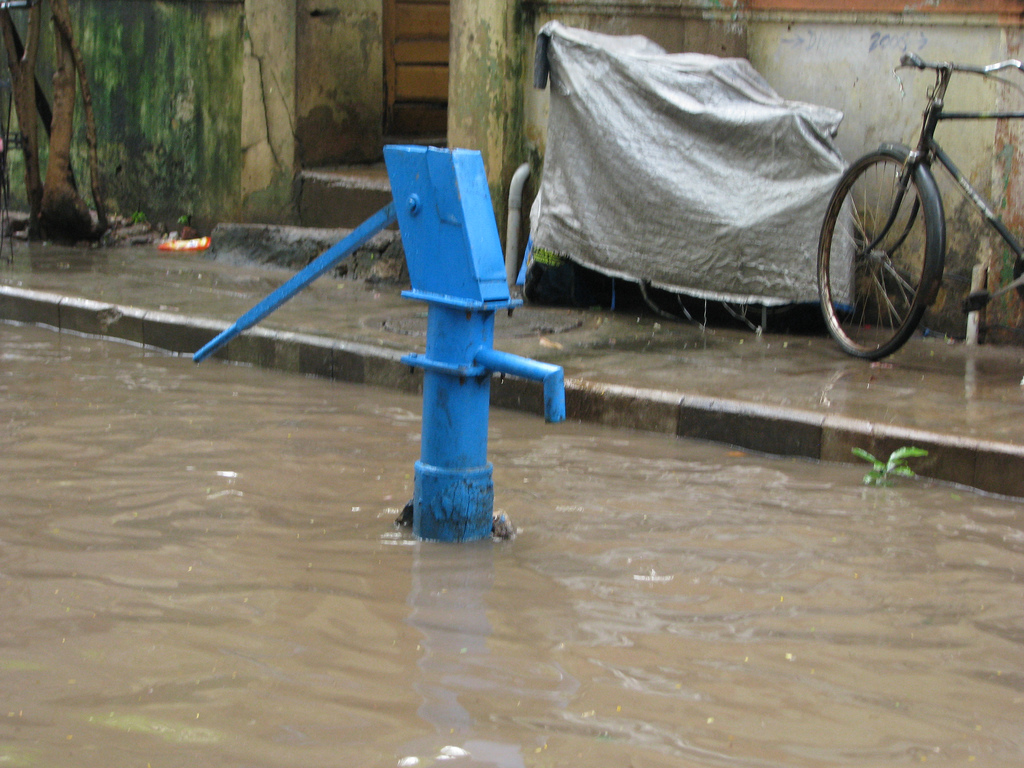 A handpump sticks out of the water in a flooded street in Chennai, 2008. Credit: mckaysavage/Flickr, CC BY 2.0

New Delhi: A new study has pointed out that flooding in polluted rivers has the potential to make groundwater unsafe for human use.

In December 2015, when Chennai was flooded and people were marooned, a team of scientists from Anna University was collecting groundwater samples along the Adyar river to investigate if the groundwater in this region was fit for human consumption.

Researchers collected water samples from 17 locations in December 2015 and April 2016 (i.e. during and after the floods). They tested the samples for salt and heavy-metal concentrations, the microbial load and their susceptibility to available antibiotics.

“We wanted to know if the city water met water quality parameters laid down by the Bureau of Indian Standards during and post-flood,” Lakshmanan Elango, a professor at the department of geology at Anna University and the leader of this study, told India Science Wire.

The results showed that the heavy-metal concentration and microbial load in groundwater samples were high. The samples contained microbes such as Enterobacter, Staphylococcus, Escherichia, Streptococcus, Vibrio and Salmonella – known to cause infections like dysentery, cholera and typhoid in humans. These microbes were cultured with various antibiotics used in clinical practice to treat life-threatening infections, to find out if they were susceptible or resistant to drugs.

“The bacteria were sensitive to most antibiotics but some were resistant to nalidixic acid, which is alarming as antibiotic resistance can rapidly spread in the environment,” Elango said. Nalidixic acid is a synthetic antibiotic used to inhibit the growth of, or kill off, gram-negative bacteria. The results of the study were published in the journal Scientific Data on October 10, 2017.

Additionally, scientists found a high level genetic similarities between bacteria from various locations, implying that they must have originated from a single domestic sewage source containing faecal matter. “Sewage must have washed off with flood water, which in turn inundates the wells that would have resulted in contaminating the groundwater,” Elango explained.

“Our findings show that floods have the potential to impact the microbial quality of groundwater in affected areas. Based on our study, we advise that wells must be chlorinated and the public must be warned to avoid consuming groundwater for drinking, at least for some months post floods.”

The study was conducted together with the University of Zululand in South Africa and the National University of Singapore, and was funded by India’s Department of Science and Technology.

This article was originally published by India Science Wire.