There Are More Peafowls in Kerala. Is It Because of Climate Change?

The presence and absence of certain species indicates habitat changes, signalling the need to conserve remaining tracts of natural habitat and restoring degraded lands to counter effects of climate change.

Sixty-year-old Kunjan Kurumban has lived all his life in the village of Pallavur in Palakkad in central Kerala. But the agricultural worker had never seen a peacock in the vicinity of his village, until a few years ago.

“Now they are everywhere,” he quipped. “They roost on coconut trees, have lots of chicks and are even eating some crops.”

Kunjan is not alone in his observations. Across the state, peafowl are now being reported by birdwatchers from areas they were never spotted before. And according to a new study, this trend is likely to increase over the next few decades as Kerala grows progressively drier.

The spread of the peafowl, therefore, could herald the succumbing of the state to climate change, suggests a study published in Ecological Indicators.

There are several anecdotal records of peafowl distribution in the Kerala of old: or rather, the lack of it. In 1933, India’s “bird man” Salim Ali conducted an ornithological survey in the erstwhile Cochin and Travancore provinces, which are now part of central and southern Kerala. He spotted no peafowl in any of the 19 sites he surveyed.

Seventy-five years after this landmark survey, a team of birdwatchers followed in his footsteps. They went to the same locations to re-assess bird numbers and presence. Astonishingly, they spotted peafowl in 10 of the 19 locations.

“Dispersal of [the] Indian Peafowl to more areas points to the emergence of suitable drier conditions and open areas formerly not present in the southern Western Ghats,” they write in their report published in Indian Birds in 2014.

Recent data appears to mirror this trend. Birdwatchers who have been contributing bird lists – and in turn, data on bird presence – on the international citizen science database eBird have reported peafowl from many locations in Kerala.

Generating basic maps using this data reveals the number of grids (square plots of 1 square kilometre each, all generated by accounting for the difference in the number of records over the years; see the purple squares in the image below) that peafowls occupy.

While there are barely any purple squares in the 1900-1989 map, some do emerge in the 1990-2000 one. And the map representing peafowl presence in Kerala between 2010 and 2015 shows a huge concentration of purple grids in central Kerala. 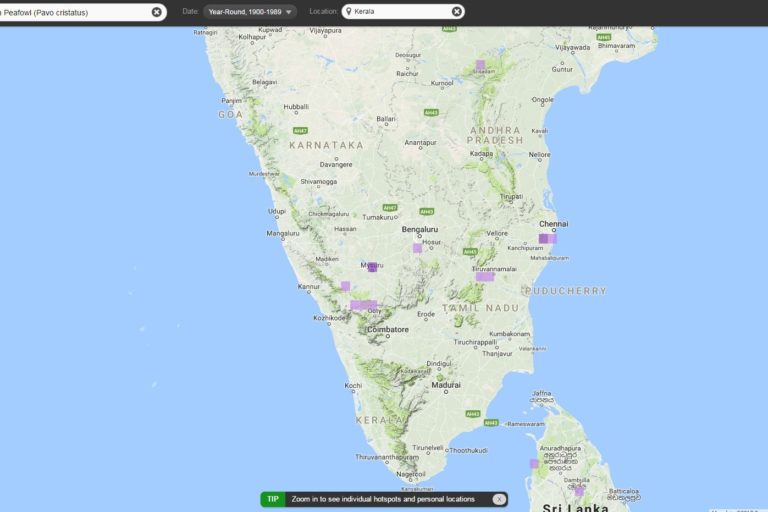 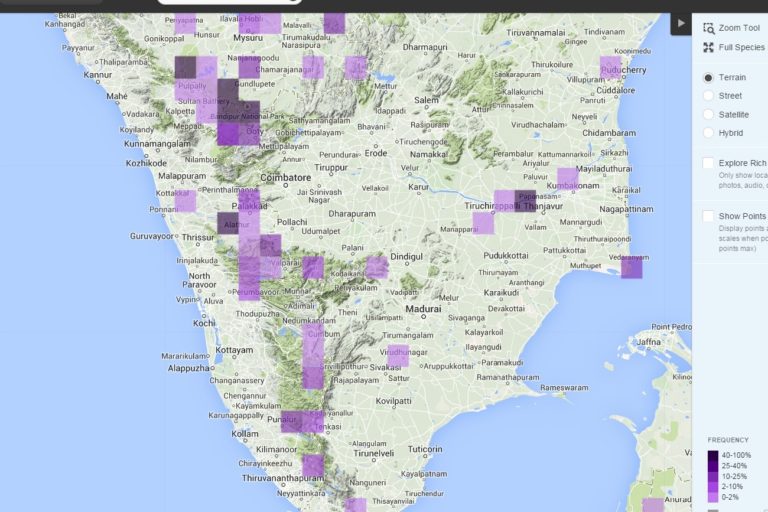 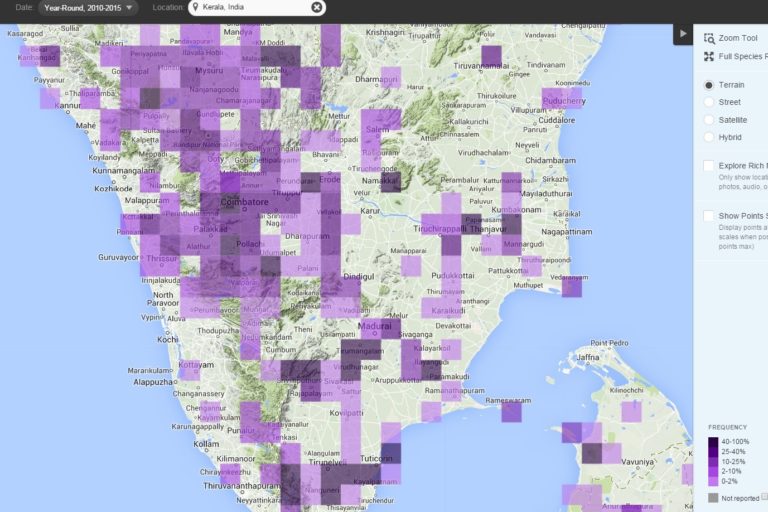 Peafowl presence between 2010 and 2015. Purple grids showing peafowl presence can be seen in many parts of Kerala. Photo: Peafowl distribution maps courtesy eBird

It was a combination of all these – trends that eBird showed, published literature and his own birding experiences – that prompted P.O. Nameer, professor (Wildlife) at the College of Forestry in Thrissur’s Kerala Agricultural University (KAU), to explore this further, he said.

“I have lived in and observed birds in the KAU campus for nearly five decades,” he added. “Only recently have we started spotting peafowls here. And now, they are one of the most common birds; some are even breeding here.”

That’s strange because peafowl usually thrive in arid habitats. Though they do need trees to roost in at night, they do well in open country including dry deciduous patches and scrub jungles. Forest edges are preferred habitats too; field guides such as Grimmett, Inskipp and Inskipp’s Birds of the Indian Subcontinent also mention that peafowl are often semi-feral when they dwell near villages and cultivation.

But then, Kerala has been witnessing lesser rainfall over the years. A study in 2014 found that the annual and seasonal trends of rainfall in many parts of Kerala were decreasing significantly; another in 2016 that analysed rainfall trends between 1871 and 2012, found that decreasing rainfall during the southwest monsoon could have contributed to “short-term meteorological droughts”, even though increasing rainfall in other seasons could be reducing drought severity.

So could climatic factors – increasing aridity, for instance – be driving the changes in peafowl distribution in Kerala? To find out, Nameer and Sanjo Jose (currently with the Forest Research Institute, Dehradun) turned to climate modelling, a method that can help predict future distributions of species under specific climatic trends.

To do this, they first obtained 1,573 records of peafowl presence in Kerala from eBird, between 1979 and 2017. They then incorporated these, along with 11 bioclimatic factors (such as rainfall and temperature), into models and algorithms to develop maps that predict peafowl distribution in the future: the 2050s and 2070s (under different scenarios of climate change), in this case.

The results reveal that under current climatic conditions, only around 19% of the state’s area – in the districts of Thrissur, Palakkad and Malappuram in central Kerala, and Kasargod in north Kerala – are suitable habitats for the peafowl. However, with future climate change, the species could increase their range in Kerala by as much as 41-55% by the 2050s. Midlands and lowlands, except in Alappuzha, Ernakulam, Kottayam and Kozhikode districts are where this range expansion is likely to occur. However, the models predict a reduction in range (22-32%) by the 2070s.

“That’s because the models predict increased rainfall in the 2070s when compared to the 2050s,” clarifies Nameer. The resulting wetter habitat could be “disadvantageous” to peafowl then, he added.

The team also find that seasonality of temperature (areas that showed mean temperatures above 28 degrees Celsius in the driest season) explained half of these changes in distribution, followed by rainfall levels (peafowl presence was more likely in places that received less than 15 centimetres of rainfall annually).

“I think the future predicted increases are indeed very likely, given past trends,” commented Suhel Quader, a scientist with the Nature Conservation Foundation, who was not involved in the study. “Even in the rest of the country we see increased peafowl abundances and possible range expansions. Research is needed to understand what is influencing those patterns.”

Several studies show that climate change can, in fact, benefit lowland species; they often expand their range size due to beneficial factors brought on by climate change.

But in the case of Kerala’s peafowl, is there anything we can do to counter these effects?

“We just cannot afford to lose any more remaining natural habitats, be they forests or wetlands or grasslands,” said Nameer. “We also need to restore and regain the habitats that have been degraded over the years by scrupulously following the principles of restoration ecology. We should also take immediate actions to check and regulate carbon emissions following the guidelines of the Paris Agreement.”

Ultimately, this goes beyond the peafowl, he claims. “These clear cut warnings – in the form of presence or absence of such species – need to be taken very seriously,” he said. “In fact, we are already seeing this happen in Kerala. So we need to be proactive towards conserving our last remaining natural habitats.”