The toll for yesterday, initially put at 30, has now been revised to 106, which takes the overall fatalities to 173 since the second spell of monsoon fury unleashed itself on August 8. 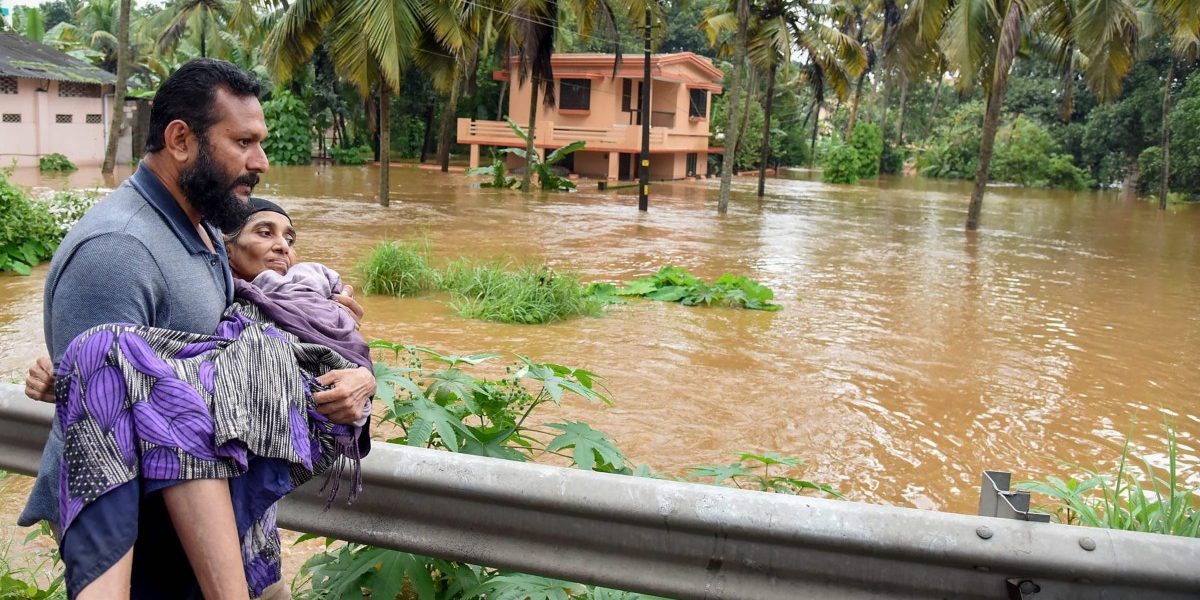 People being rescued form a flood-affected region in Kochi on August 16, 2018. Credit: PTI

Thiruvananthapuram: More than 100 people died in rain-related incidents in Kerala in just one day yesterday, sources in the State Disaster Management Authority said, even as defence forces scaled up operations this morning to rescue those stranded in worst-hit areas.

The toll for yesterday, initially put at 30, has now been revised to 106, the sources said, which takes the overall fatalities to 173 since the second spell of monsoon fury unleashed itself on August 8.

Prime Minister Narendra Modi is expected to reach Kerala tonight after the funeral of former prime minister Atal Bihari Vajpayee. He is likely to undertake an aerial survey of the flood-affected areas tomorrow.

Around 3,000 people were rescued from Ernakulam and Pathanamthitta districts yesterday.

Several people are stranded in buildings in various districts. Many of them, including children, were rescued from various waterlogged areas.

“In one of the worst rain and flood disasters to hit Kerala, 106 people lost their lives on a single day yesterday,” a source in the Kerala State Disaster Management Authority said.

In the second spell of rains to hit the state since August 8, 67 people had lost their lives till Tuesday.

Army, Navy, Air Force and NDRF personnel have begun rescuing people stranded in the worst affected areas of Ernakulam, Pathanamthitta and Thrissur districts from this morning.

Many elderly persons and women with young children were rescued since this morning.

Local fishermen have also joined the rescue mission bringing in their boats to help in evacuation of the stranded people in various places in Aluva, Kalady, Perumbavoor, Muvattupuzha and Chalakudy.

A weather report at 7 am has predicted heavy rain accompanied by gusty winds in various parts of the state today.

Desperate non-resident Keralites from Australia, the US and the UK were making fervent pleas to authorities through television channels seeking help for their dear ones.

Soumya from Australia said her parents and their relatives were stranded in Aluva for the past two days. Another person said an elderly relative, Mary Varghese, was badly in need of oxygen cylinder and her condition was worsening.

In a WhatsApp video, a stranded woman with her six-year-old child was seen pleading for help. “We have no food or water. Please help us.”

On instructions from the prime minister, the defence ministry has rushed in fresh teams of the three armed forces for relief and rescue operations in the state where over 1.5 lakh homeless and displaced people are taking shelter in relief camps.

The operations at the Kochi International Airport will remain suspended till August 26, with runways being flooded.

Over 25 trains were either cancelled or rescheduled in Kerala. Kochi Metro operations have not been affected so far, sources said.

With waters flooding the private Aster Medi City in Kochi, some patients were shifted to other hospitals.

The state government also decided to raise excise duty on Indian Made Foreign Liquor till November 30 to mop up additional resources for relief and rehabilitation efforts, official sources said.