Devashish Makhija's 'Oonga' presents itself as an 'ecological odyssey' similar to the modernist colonial odysseys of the early 20th century, which explored a rapprochement with modernity, or (industrial) development.

Launched at this year’s Jaipur Literature Festival, Devashish Makhija’s novel, Oonga, published by Tulika Books, is a moving perspective on environmental conflicts that belligerent industry/mining development unleashes on an adivasi village in the tribal hinterlands of Odisha. Trapped in the crossfire between the central reserved police force (CRPF), facilitating eviction, and Naxals, avenging their eviction, the Dongria Kondh adivasi tribe, threatened by eviction, is forced into combat, further propelling blood-ripped civil strife.

The charm of this novel lies in the author’s narration, which is intense and multi-layered, yet sufficiently meticulous, especially in portraying geographies, people and events, and hence compelling spontaneous participation of the reader in the account. The story ties up around the riveting description of a Dongria adivasi boy, Oonga, his escapade to the city in search of his mythical hero Rama, and subsequent home-coming.

I would call Oonga an ecological odyssey, essentially similar to the modernist colonial odysseys of the early 20th century, in exploring a rapprochement with modernity, or (industrial) development in lucid terms. In tandem, it raises the key philosophical question of how to reoccupy the vacuum of divine power (Nature, in this case) that exists in the modern materialistic culture, and exposes the failure of available solutions, in the process.

There are two parallel narratives lacing through the novel. The dominant political narrative, captured through the lens of several disgruntled inheritors of the belligerence called development, is predominated by the issues of (human) rights, justice, and retribution.

While the philosophical exposition of the author is subliminal in his retelling of the mythology of Rama (which I’d say is more of Sita, given his ecofeminist reinterpretation of the epic) that speaks of universal harmony and insinuates the rights of nature, in juxtaposition to that of the humans in the political narrative, Makhija uses the odyssey motif as an access point to this complex realm of development.

The physical journey takes us across three types of landscapes – green and lush (underdeveloped), red and barren (developing), grey and concrete (developed) – demonstrating that the ongoing process of development is contrary to (ecological) bounteousness. Ecology or nature in turn determines the human propensities of the characters in this novel, where abundance is depleted/threatened, humanity is compromised.

Rather than interpreting Oonga as an anti-development narrative, it would be pertinent to ask what it does with the idea of development.

It does not reject the idea of development as an adaptation strategy: “…to survive one must adapt…Some things development brings could be empowering” (p.49).

But warns about the risk of a trade-off between empowerment and justice: “…in bringing these things, (the adivasi’s) legal rights cannot be compromised…Is it fair to force a tree to make way for a road? A railway line? A building?” (p.49);

And dreads that the obsession with justice can lead to: “…the loss of goodness…loss of kindness…the loss of life itself.” (p.49).

In effect, it questions the modality of development – why the human rights-centric approach fails in seeking a consensus between humanity and development; and subtly exposes the author’s cynicism about the feasibility of human institutions in supplanting Nature’s power of personal harmony and universal accord.

Consequently, Oonga becomes a critique of the environmental philosophy of ‘anthropocentrism’, underlying the (human) rights-based approach to development. This is in synergy with Makhija’s earlier work(s) that questions anthropocentrism for being inherently discriminatory and hegemonic:

“My first short film, Rahim Murge Pe Mat Ro, questioned our apathy to other creatures who have become merely resources to us humans. Animals, birds, and plants are either food, fuel or medicine. We hardly accord them a consciousness, assuming instead that we are superior in all respects.”

In this vein, anthropocentrism is a potential trigger for man-man/man-state conflicts over control of resources (Nature) and hence the exercise of human rights to self-determination and identity assertion. The modern state’s terra nullius vis-a-vis the indigenous people’s customary rights over indigenous lands, both represent some kind of man-Nature power hierarchy, probably with varying degrees of exploitation of resources.

Makhija is cynical about this power hierarchy. Rather, he is anti to it. For this is what converts development into a rapacious, belligerent process, from an adaptation strategy for survival. Perhaps he wants to remind us of the squalid, gory interiors of the ‘civilizations’ that had once boastfully subjugated Nature in the name of progress. A message that he puts across through his mythological protagonist, Sita:

“You cannot own the earth. It is the earth that owns you…her heart is infinite…She accommodates us all. You seek what you cannot have. And you have torn and plundered for it…Her wounds can now only be filled by the ash from your bones. And the congealed blood from your veins.” (p.206) 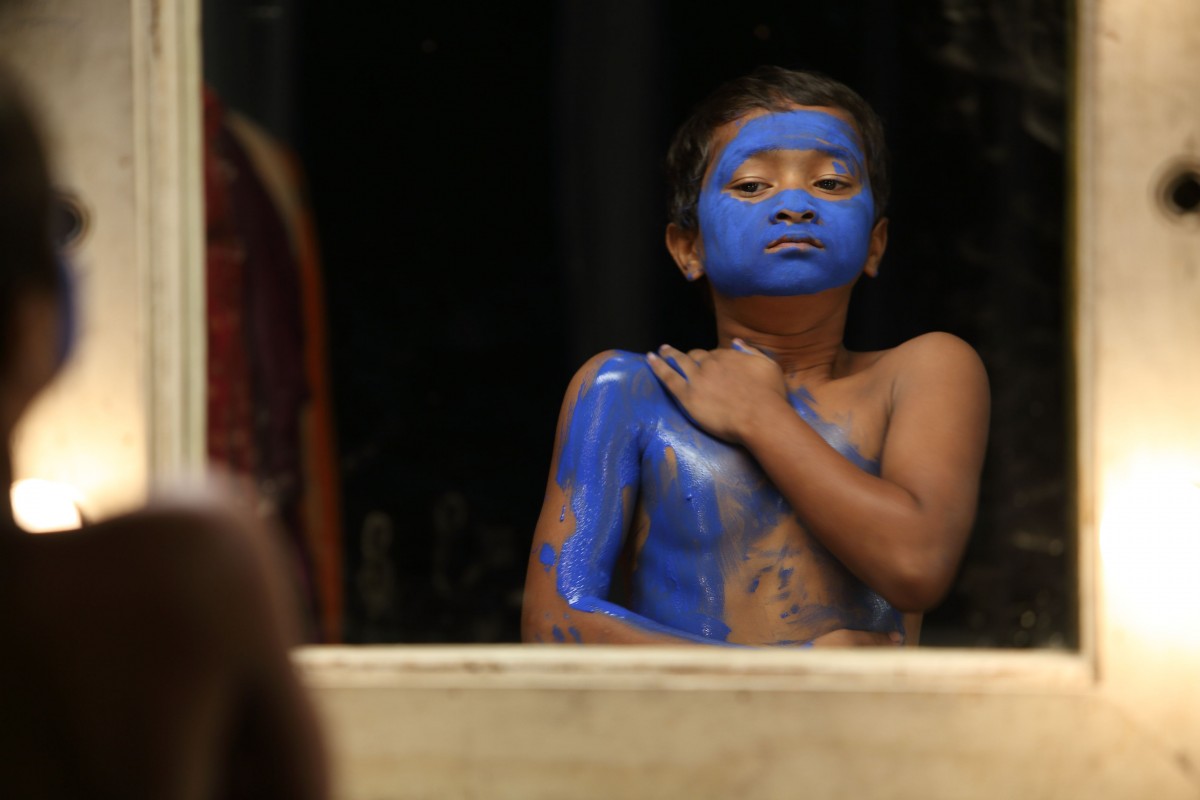 Through the story of advisai boy Oonga, the author critiques the environmental philosophy of ‘anthropocentrism’. Photo: Devashish Makhija.

The death/loss of Nature, therefore, implies the death of ‘empathy’, which in turn shreds the delicate fabric of ecological harmony to pieces. With this, Makhija, expounds a more incisive question: Can ‘justice’ replace ‘empathy’ in resurrecting/preserving humanity – only to expose the false glory that we attach to justice as the healer.

Justice, in its broadest sense, is the principle that people receive what they deserve. In a top-down political hierarchy, it is the apex that decides what the bottom deserves, and more importantly, gets.

This schism between the entitlement and delivery of (institutional) justice is well captured in the narrative by the conspicuous absence of the state. Its only presence is felt through its militant brutality (CRPF) as if that is THE justice to be delivered. In an anthropocentric mindset, innately conditioned to attach importance to ‘self’ as part of the superior human species, justice that is denied or is regressive to one’s self-esteem, will be countered by retributive justice.

What I found spellbinding about the novel is its attempt to explore systemic violence from a psychosomatic perspective, to impress upon the reader that it perpetuates through the corruption of the human mind and degeneration of soul, rather than external bloodshed and mutilation.

Also read: Why the Adivasis Must Seek to Redefine Themselves

Makhija, thus, uses the metaphor of a journey to navigate the inward course of his characters, Oonga himself in particular, and takes the readers to that dark core of little Oonga’s subconscious where his human instincts as the ‘supreme’ or superior overpower his innocent curiosity and compassion. This ecological odyssey, like the 20th century colonial odysseys, associates home-coming with death and estrangement. Death of the innocent and estrangement from Nature, or home, as it used to be for Oonga, even at the onset of his journey.

Being a child of Nature, why did Oonga fail to recognise the subliminal codes of Nature and empathy in the mythology?

The novel makes a scathing suggestion that anthropocentrism creates a perverse cultural hegemony by instigating our primordial urge of banding with the akin (self-esteem) and undermining/destroying the unalike (self-worth). Thus the cultural binaries of indigenous/non-indigenous, inferior/superior, good/bad, etc., are all our anthropocentric constructs that we fear to give up. It is this fear that severs our ties with Nature, for: “A heart that carries dread cannot beat in time with the pulsing of the earth” (p.292).

Makhija’s exposition on cultural hegemony is ingenious. Throughout the narrative, he has dismantled these binaries as problematic (notably, ‘native-hood’- based indigenousness in the context of a ‘migration-driven’ nationhood) and resurrected them through his characters, making the readers realise that the cultural hegemony exists because we allow it to exist by internalising these externally forced marks of discrimination and using these as tools for our identity assertion and articulation of power. Oonga is just an unfortunate heir of this legacy, just as he is of our vainglory about justice/rights/and doing the right.

In his child-eyed innocence, when Oonga exults his victory, righteousness, invincibility as the signs of his being a man, I shudder to think of the kind of manhood, life, and culmination that we are leading him, or, so to say children like him, into:

“….who could have been farmers are in this jungle now. They (both) know how beautiful the morning is going to be. But one of them will never get to see it.” .

What arrested my imagination completely at the climax of this novel was not the dread of retaliatory violence, but the realisation that how retribution becomes intergenerational in nature.

Sunipa Das Gupta was formerly on the editorial board of the Economic and Political Weekly (EPW), Mumbai.She can be reached at sunipa.dasgupta@gmail.com