Mining in Odisha Has Stripped Locals of Access to Clean Air, Water

Rampant mining has led to the diversion of 10451.39 hectares of forest land over 38 years in Keonjhar district – the highest loss of green cover in Odisha since 1980.

In the latest budget session of the Odisha legislative state assembly, state forest and environment minister Bikram Keshari Arukha hinted at the extent of mining the northern region of the state has undergone in the last few decades and its repercussion on the green cover.

In his statement before the house (a copy of which is with Mongabay-India), the minister said that in Keonjhar district, considered to be the mining hub of Odisha, a total of 64 mining projects have led to the diversion of 10,451.39 hectares of forest land over 38 years. According to government data, this was the highest loss of green cover in any district in Odisha since 1980.

Keonjhar or Kendujhar is known for its tribal population, a majority of which relies on the traditional practice of using forest areas and produce for shelter and livelihood. According to the 2011 Census report, Keonjhar is home to 45% of the Scheduled Tribes (ST) population from the district.

The district is also known as a mining hub due to massive high-quality deposits of minerals like iron ore and chromite.

Left high and dry by mining

Rampant mining in the once densely forested areas of this district for the last few decades has left many local communities, most of them tribals, deprived of fundamental rights like access to clean air, water and greenery.

Talakainsari is a village panchayat, comprising several villages, in the Banspal block of the district. Frequent dumping of processed rocks – mineral-rich rocks leftover after mining, which are a source of air pollution as they make the area dusty — has escalated the woes of villagers. 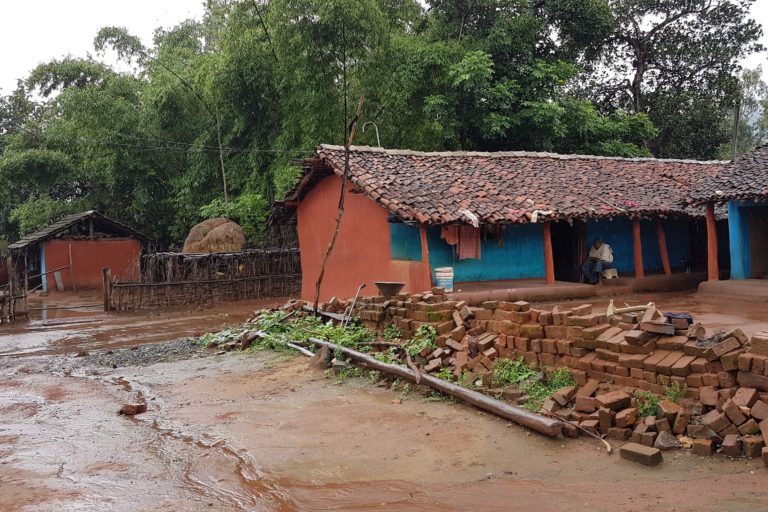 Many households in Keonjhar villages are made up of clay. Photo: Manish Kumar/Mongabay

“The dust from the dumping sites often engulfs our village and affects regular movement of people outside their homes. The roads leading to our village have been destroyed by trucks belonging to the mining companies,” said Sakuntala Dehury, a resident of Nitigotha village in the Talakainsari panchayat.

Also read: How Adivasi Livelihoods in Odisha Were Ruined by ‘Development’

In fact, roads leading to many villages in the area have been badly damaged due to the continuous movement of mining trucks. These vehicles often make a beeline to the dumping yard in hundreds, jeopardising especially the movement of children, the elderly and those who have difficulty walking on the pothole-dotted roads. The conditions are worse during monsoons.

Safe drinking water is another challenge faced by locals. The area is dotted with orange-coloured ponds, effluents from mining and post-mining activities. Environmentalist S.N. Patro from Odisha said that the toxic orange indicates high levels of iron, chromite and other heavy metals, which are often mixed with the water bodies in mining areas. 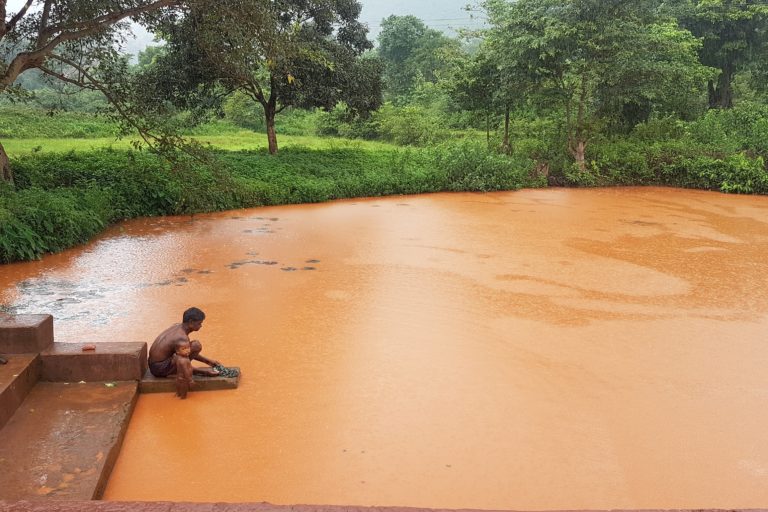 A child and his father use a polluted pond at Talakainsari panchayat in Keonjhar district. Photo: Manish Kumar/Mongabay

Studies have conclusively shown that the water in many of the mining areas in the district is not fit for consumption. A 2017 study evaluated the water quality of six streams at Gandhamardan Iron Mines at Sukati in the Keonjhar district. Based on 14 parameters, the study concluded that the water could be used for irrigation, but was not fit for domestic consumption. It also attributed the poor quality of water to anthropogenic activities like mining.

Another study by Lipsa Dash from Sambalpur University and Vijayeta Priyadarshi from the Government Women’s College, Keonjhar also points to the rampant cases of respiratory disorders, water-borne diseases, eye and joint problems among the population of Kumunda panchayat in the Banspal block of the district, which can be considered an impact of the mining.

Left with no other option, the locals, however, continue to use water from these ponds for their daily needs. “Most of the hand-pumps of our village are defunct. The water tank earlier built by the government is also not working. The few solar-operated taps we had are also not usable. So we have no other alternative apart from using water from the ponds for drinking, bathing and washing utensils and clothes,” says Mohanty Dehuri, a 55-year-old resident of Uparkainsari, an official village listed by the district government as “mining-affected”.

Kalu Behera, a 35-year-old villager from Uparkainsari, says that the groundwater in the area, drawn by hand pumps, is often muddy red in colour and unfit for human consumption. Behera claims that farming has also been affected due to the quality of soil which has deteriorated over time, mostly due to mining activities nearby.

Driven to desperation by extreme water deprivation, many tribal communities living in remote areas consume water from open mountain streams or by digging pits in the soil to draw water. 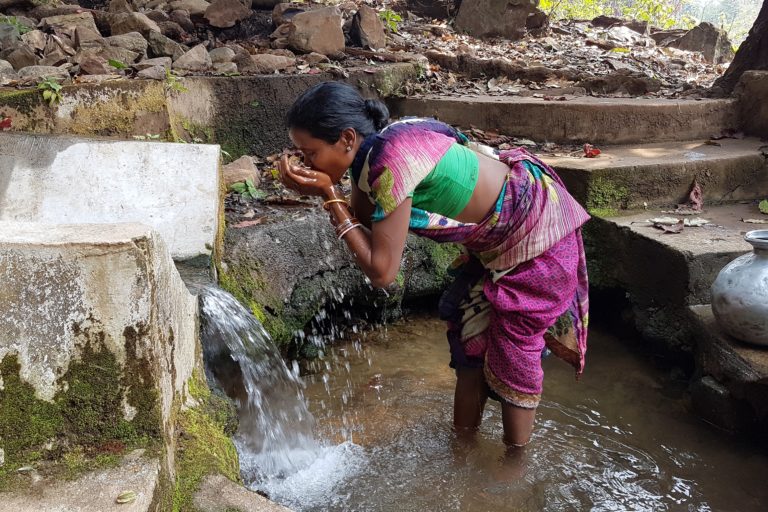 A woman drinking water from the mountain stream at Bargarh. Photo: Manish Kumar/Mongabay

This is a common practice in Bargarh, a tribal village in Banspal block. “Water-borne diseases like diarrhea and typhoid are common in our area due to the consumption of unsafe water. The tube wells either do not work or discharge muddy water. We have no option but to drink water from small, open mountain streams or by digging into the soil,” said Dengi Juang, a 60-year-old woman from the village.

Like Juang, many women from the village suffer, with no help from the government. Many are forced to fetch water from at least a kilometer away from the woods near the village.

Experts and non-government organisations (NGOs) working in the district affirm that mining has wreaked havoc on the natural resources of the region. “Earlier many blocks of Keonjhar had natural water streams. Many miners chose that spot and destroyed the natural flowing streams to the villages. Now, villagers using water from natural sources are either getting contaminated water or are being forced to get water from tankers,” said Dushkar Barik, secretary of the Keonjhar Integrated Rural Development and Training Institute (KIRDTI). 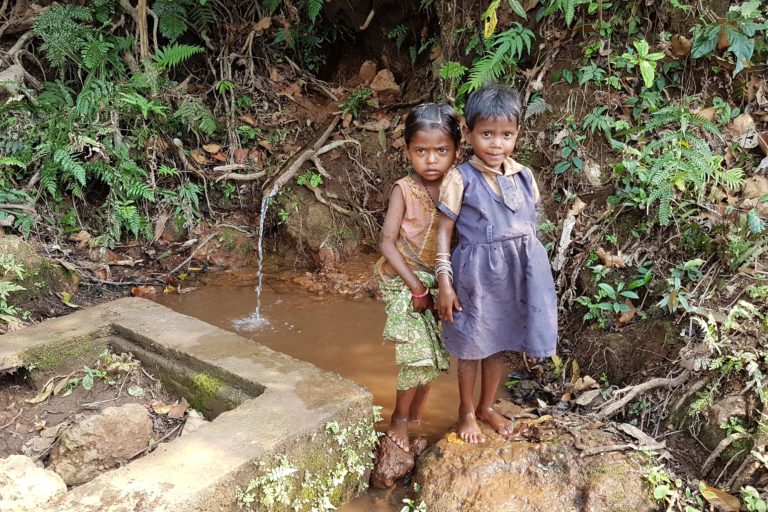 Children in Baragarh are used to drink water coming out from jungle canals and mountains. Photo: Manish Kumar/Mongabay

The district administration, however, claims that they are fighting hard to provide safe drinking water to the mining hit areas and also attempting to take miners on board to mitigate water pollution and air pollution.

Ashish Thackrey, Keonjhar District Collector, told Mongabay-India, “The main issue with the water quality in mining hit areas is the higher presence of iron in it. Through DMF and other state scheme funds, we are installing iron-filtration based water taps for the villagers living close to mining areas. Their maintenance and upkeep are also inspected regularly, and third party checking is also done to ensure their smooth functioning.”

The official said that two mega piped water supply projects worth Rs 1600 crore are now being undertaken which would ensure piped water to each household. He also said that in some areas due to higher iron content, tube wells discharge red coloured water but he hoped the with the drinking water projects such hurdles could be sorted out.

Indian law mandates that miners contribute a portion of their profits to the District Mineral Foundation (DMF) to help people living in areas around mines. The DMF Trust is a district-level body comprising the District Collector, MPs, MLAs and other local representatives, established as per the DMF rules of the government. It decides on the DMF fund utilisation and discusses the matters and policies on spending it in the district.

However, the usage of DMF funds in non-mining-affected areas has stirred up controversy in the state. For instance, there was a recent allocation of more than Rs. 300 crore (Rs. 3 billion) for the construction of a medical college in an urban area in the district. Dushkar Barik complained that the Trust does not have village level representations – many pressing concerns in the rural areas are not addressed and funds are diverted to non-mining urban areas, he alleged.

Meanwhile, according to villagers in the panchayat, many of the solar-operated taps that were installed with money from the DMF funds are either spewing muddy water or lying defunct due to government apathy. 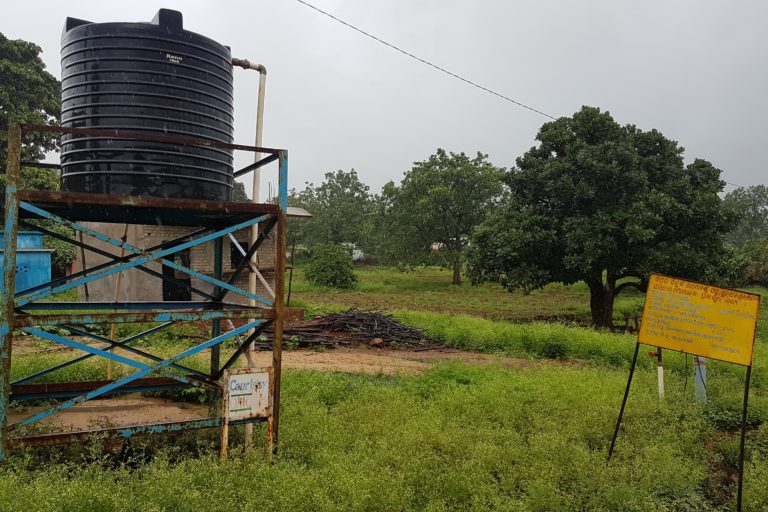 A report, published by the New Delhi-based think tank-Centre for Science and Environment (CSE) in 2019 also hinted at the lacuna in delivery of services under the DMF Funds in mining-affected areas and urged the government to prioritise health, drinking water and nutrition for utilisation of the funds.

However, some claim that strict vigilance and prioritisation of available funds could solve many problems. Shankar Prasad Pani, a lawyer with the National Green Tribunal (NGT), said, “There is no dearth of money with the state government. The government needs to shift their focus on long term plans. Serving water through tankers is not a long term solution. While many funds which are specially meant for mining aggrieved areas are spent on non-mining areas and for opening medical colleges and paying the staff their salaries should be spent mostly on improving the lives of the aggrieved.”

Also read: Eviction of Tribals: Forced Displacement and Its Links With Poor Health

He also added, “If strict vigilance of mining firms is undertaken since starting of operations of a new miner, pollutions and defiance of rules could be tackled. Many miners often flout norms which they need to adhere as per the agreements and laws under which they get a licence to operate. If strict actions are taken against the errant on regular intervals, scientific waste disposal and other pollution mitigating works would be taken by themselves.”

But, business is booming

Even as the tribal population bears the brunt of indiscriminate mining, the Odisha government claims that mining has contributed heavily to its revenues. In the Economic Survey of 2018-19, the government claims that the mining sector alone contributed 10.8% of the Gross State Domestic Product (GSDP). According to the report, there was an increase in overall revenues from the sector in the last few years and a surge in employment due to jobs created by mining and related activities like ore processing and manufacture. 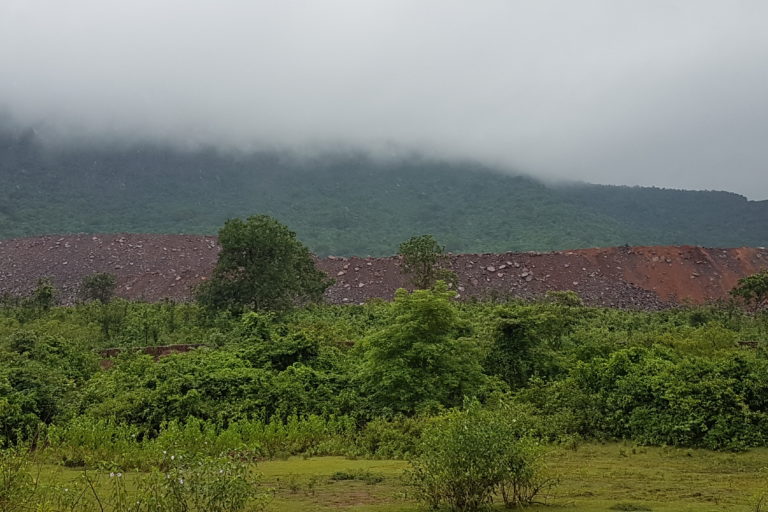 A written statement from the Central Government in the Lok Sabha on March 15, 2018, claimed that Odisha accounted for the highest collection of DMF funds in India, hinting at the magnitude of mining undertaken in the state compared to the national picture.

According to data submitted by the state government in the Odisha State Assembly on August 1, 2019, although Keonjhar district reported the maximum collection of Rs 2019.81 crore in the last two years, it could spend only 22.5% of the funds.

This, despite the fact mining-affected areas are desperately in need of the most basic amenities.