Odisha: Cyclone Amphan Compounds Miseries of Those Reeling from Effect of Lockdown

Those who have lost their sources of livelihood due to the lockdown will need continued help from the government to rebuild their lives, locals say. 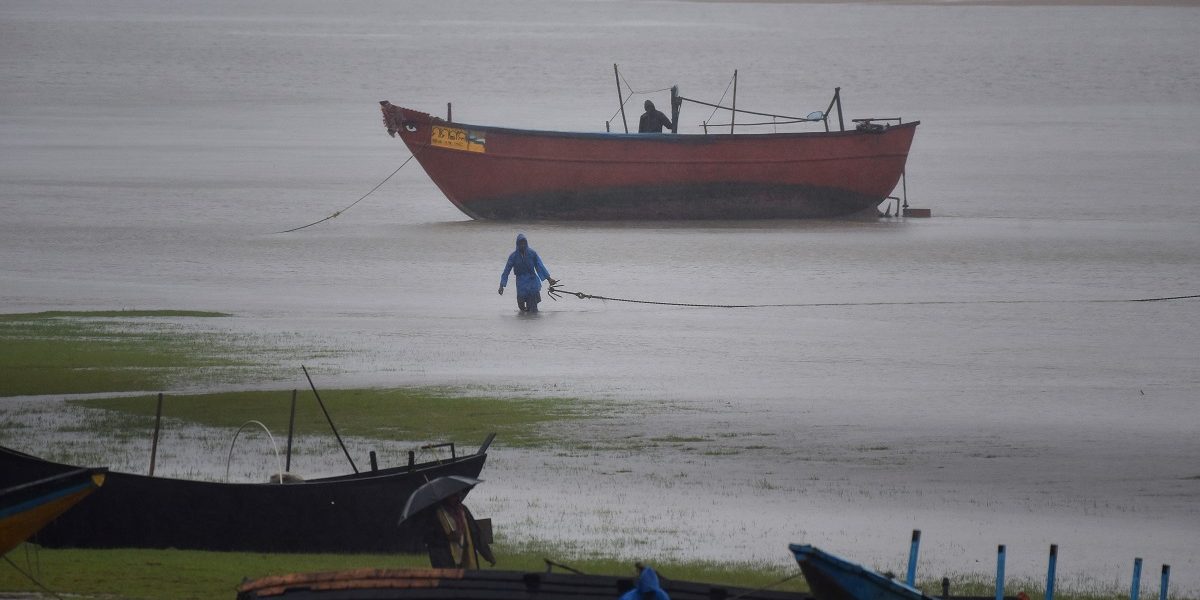 Fishers tie their boats along the shore before Cyclone Amphan makes landfall in Baleswar district, Odisha, May 2020. Photo: Reuters/Stringer

Bhubaneswar: Super cyclone Amphan, which barrelled through the Odisha coast on Wednesday leaving behind a trail of destruction in the shape of damaged houses, uprooted trees and flattened electricity poles, has compounded the miseries of the poor already reeling from the effect of the COVID-19 lockdown.

Struggling to make ends meet after losing their sources of livelihood due to the shutdown of all economic activities, daily wage earners and other economically vulnerable sections are now faced with another challenge – the task of rebuilding their damaged houses.

Bibek Swain is a farmer from Khadikadanda village, which falls under the Kusupur gram panchayat of Jagatsinghpur district. Along with Kendrapara and Balasore, this district bore the brunt of the gale that hit the Odisha coast with wind speeds reaching 120 km per hour. “Almost every house in our panchayat has suffered damage of some or other kind. Mud and thatched houses have been damaged extensively,” Swain said.

He added that the poor have been especially affected, saying even if the government comes forward to support them, it will be difficult for them to rebuild their lives.

Torrential rains added to the woes of the people, especially those living in low-lying areas. Official sources said around 1.25 lakh people were evacuated to safety from vulnerable areas ahead of the cyclone.

Swain, whose vegetable crop has suffered extensive damage, cited the case of two migrant workers, Ganesh Swain and Nabin Mallick, who had returned recently from Kolkata, where they worked as welders in a now-defunct iron foundry. He said they are now lodged in a quarantine centre within the gram panchayat area. “Both come from poor families in the neighbouring Tentulibelari village. The cyclone has left their families devastated. How can they repair their damaged houses when they don’t have enough to eat?” asked Swain. A scientist at India Meteorological Department Earth System Science Organisation, points to a section of the screen showing the position of the Cyclone Amphan in Kolkata, May 19, 2020. Photo: REUTERS/Rupak De Chowdhuri

Behera added that the biggest blow to the local farmers was the destruction of the betel vines, their main source of income. The area supplies betel leaves to cities like Varanasi, Allahabad, Delhi and Mumbai, with an annual turnover estimated to run into crores of rupees.

“The cyclone has played havoc with betel vines in Dhinkia, Gadakujang and Nuagaon panchayats, where people depend heavily on it as a source of livelihood,” said Behera, adding that around 6,000 people who had been moved to special cyclone shelters are being fed through free kitchens being run by the local sarpanches with government assistance.

Sarpanch of Gadakujang, Sampad Kumar Barik, said he was doing his best to help the cyclone-affected people but his best may not be enough. “Last night, we gave flattened rice, biscuits and jaggery to around 500 people. This afternoon they were served ‘dalma’ (a dish of lentils mixed with vegetables) and rice. But those who have suffered extensive damage to betel vines are going to need this kind of support for a longer time. We, too, are under stress. The government has not reimbursed us for the expenditure we incurred on running free kitchens in the wake of cyclone Fani last year,” said Barik. The BDO, on the other hand, denied the charge. He said money has not been paid to the sarpanches as they had failed to submit expenditure vouchers.

The situation was worse in parts of Kendrapara district, where the administration mounted a major evacuation exercise ahead of the cyclone to avoid any casualties. More than 32,000 people were evacuated to safety from different parts of the district which has a long coastline and remains prone to natural calamities like cyclones. In Marshaghai block of the district, 150 people had to be shifted even from COVID-19 quarantine centres as these structures were not considered safe. Marshaghai block development officer (BDO), Sridhar Biswal said these people were shifted from asbestos roof houses to  RCC (reinforced cement concrete) roof houses to ensure their safety.

However, retired forest officer, Bipin Behari Behera, who now lives in Sasanipada village under Kendrapara’s Marshaghai block, said the local high school where some of the inmates of a quarantine centre had been lodged to protect them from the ferocity of the cyclone was not safe at all. “The roof is not strong and the school does not even have proper toilets and drinking water facilities. They have been moved to many such places in a hurry,” remarked Behera.

Former Balikuda MLA Dr Lalatendu Mohapatra said while the government was correct to move people to safety before the cyclone’s landfall, it was not implemented properly at the ground level. “The government knows very well that it depends heavily on panchayat level representatives to deal with such situations. But it still did not take steps to keep them happy and well equipped to deal with the crisis. Many of the sarpanches who are yet to be compensated for the expenses incurred on running free kitchens during cyclone Fani last year were reluctant to show the same kind of generosity towards the cyclone-hit people this time. Besides they wanted to avoid having to deal with large gatherings as the fear of the spread of COVID-19 continues to play on their minds,” said Mohapatra.

The bigger challenge for the government, according to Mohapatra, would be providing livelihood opportunities to the cyclone-hit poor who were already struggling to eke out a living in the wake of coronavirus-induced lockdown. “The government keeps making big claims about creating jobs but so far there are no jobs in sight and the poor continue to struggle. It is like the government’s claim about arranging transport for migrant labourers passing through Odisha, but still thousands of them continue to walk daily. Let’s be realistic and let the government keep its promises,” averred the former MLA.

Sanjay Mohapatra, a Gadkujang-based social worker agrees. “The harsh truth is that the miseries heaped on the people by the coronavirus pandemic have aggravated due to the cyclone. The poor cannot survive on empty promises,” he said.