Activists are hopeful that the judgments will help deter private companies from functioning with impunity and under the cover of governmental apathy. 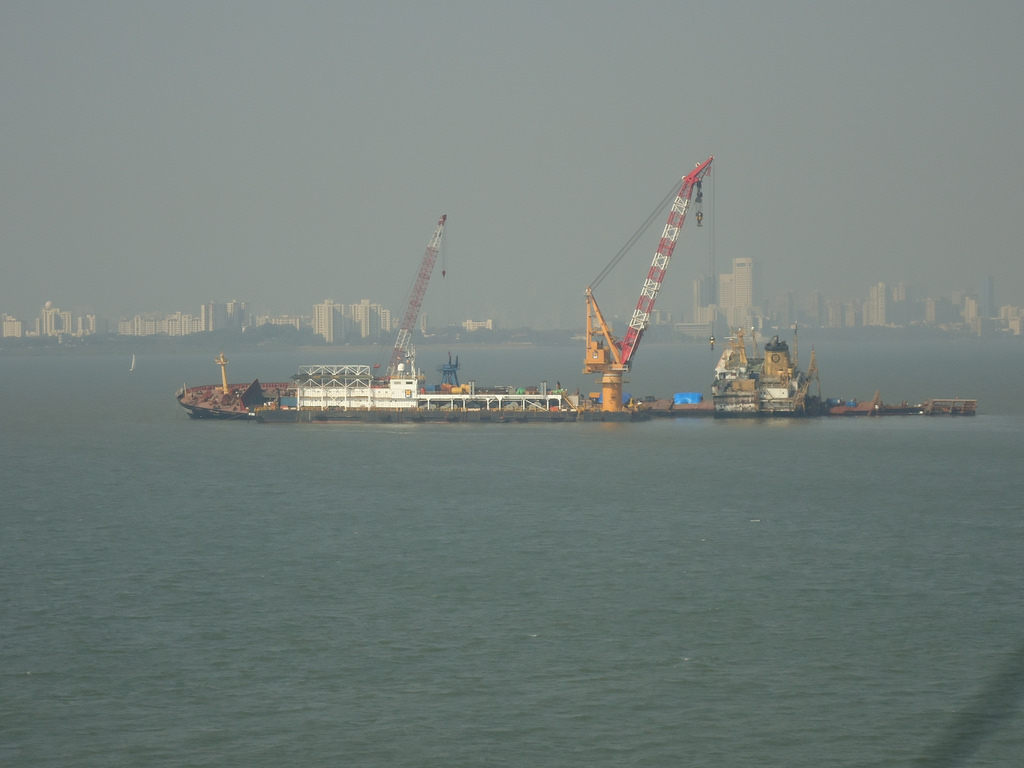 A rig addressing the oil spill off the Mumbai harbour in January 2011. Credit: felixdance/Flickr, CC BY 2.0 A rig addressing the oil spill off the Mumbai harbour in January 2011. Credit: felixdance/Flickr, CC BY 2.0

The National Green Tribunal (NGT) covered new ground for the ‘polluter pays’ principle by invoking it in two landmark judgments last week. First, it ordered Alaknanda Hydro Power Co. Ltd., a hydroelectric power company, to pay Rs 9 crore as compensation to people affected by Uttarakhand floods in 2013 because the dam constructed by the company contributed to the flooding experienced by residents of the region. Second, it fined Delta Marine Shipping Co., a marine shipping company, Rs 100 crore for the oil spill and ensuing ecological damage caused when one of the company’s ships sank off the coast of Mumbai in 2010.

The judgments in both cases are important instances of the NGT exercising its power to fix liability and hold private companies responsible for the environmental damage they cause. These judgments set a precedent for shifting the monetary responsibility of rectifying ecological damage from the government to the private actors responsible for causing the damage. The decisions will save taxpayer money and, importantly, the Alaknanda case is a rare example of affected civilians successfully suing a corporation for compensation.

Upendra Baxi, emeritus professor of law at the University of Warwick, wrote in an email, “These decisions are truly inaugural. They subject economic enterprises to a code of environmental jurisprudence.”

Ritwick Dutta, an environmental lawyer who served as counsel in both cases, stated that Alaknanda is the first time that a private company has been held responsible for damage precipitated by a natural disaster. It was also the first time that the NGT has used the ‘polluter pays’ principle to fine a marine shipping company for causing ecological damage.

Until now, according to Dutta, “The stand of the ministry of environment and forest has been that dams don’t damage the environment.” He added that previous court decisions reflected this way of thinking as companies would use an “act of God” defence to shun liability for the damage caused and instead ascribe it to floods and natural disasters.

However, in this case, the tribunal determined that the cloud burst on June 16 and 17, 2013, caused extreme amounts of rainfall in the region that collected in the dam’s reservoir. The company’s subsequent decision to open the dam’s sluice gates “resulted in [a] massive flow of water suddenly sweeping away the muck dumped on the river body and carrying it to the villages and the area flooded by the floods,” stated the judgment. The tribunal also noted the company’s negligence when it came to executing safety measures for disposing of the muck generated during the dam’s construction, another factor that exacerbated the flood-related damage.

Using the legal definition of ‘accident’, which means “an accident involving a fortuitous or sudden or unintended occurrence”, the tribunal determined that the loss of damage and property suffered by the applicants was indeed accidental. However, it still charged the company with paying compensation to those affected by the Uttarakhand floods by invoking the principle of no-fault liability. The principle is applied when the defendant in a case is held liable and expected to pay compensation even if their actions are not responsible for the damage caused.

The tribunal concluded by issuing directions, starting with: “Alaknanda Hydro Power Co. Ltd.-GVK to deposit an amount of Rs. 9,26,42,795 as compensation to the victims within a period of 30 days from the date of order.”

Baxi echoed Dutta’s positive take on the judgment, “The idea that there are pure natural disasters without any human human responsibility is firmly rejected in the Uttarakhand Case. Collective and corporate responsibility is encoded in the notion of foreseeability and the NGT has done well to accentuate this.”

In the Delta case, the NGT used the ‘polluter pays’ principle to impose a fine on Delta Shipping Marine Co., a Panama-based shipping company, for the damage caused when a ship owned by the company sank and caused an ecologically devastating oil-spill off the Mumbai coast in 2011. Notably, the tribunal extended the principle to include Adani Enterprises Ltd., the intended recipient of the ship’s cargo of coking coal.

The ship was carrying over 600,000 metric tonnes of coal in its holds, over 290 tonnes of fuel oil and another 50 tonnes of diesel. The resultant oil spill caused grave damage to the mangrove forests and marine ecology of the region. The formation of tar balls on the ocean’s surface adversely impacted aquatic life in the area as well.  The applicants even provided evidence to prove that the dispersants used to clear the oil spill were also harmful to the marine ecology of the affected region.

The tribunal ruled that “no party from any country in the world has the right/privilege to sail an unseaworthy ship to the Contiguous and Exclusive Economic Zone of India and in any event to dump the same in such waters, causing marine pollution, damage or degradation thereof.”

Dutta expanded on this order, saying that India currently functions as a “dumping ground” for old ships that are not seaworthy, citing the fact that Gujarat is home to the largest ship-breaking yard in the world. Thus, according to him, private companies are able to send old ships to India and incur very low liability on their part. The ship that sank in 2011 was kept in use by Delta despite its potential unseaworthiness.

Baxi wrote on the marine case judgment, “The NGT seems to have equally firmly dealt with the marine pollution case. No longer corporate immunity and impunity may extend to saying that loss belongs where it falls! Shipping companies may not ply unseaworthy ships either in coastal territorial waters or the high seas.”

Dutta too hopes that the NGT’s decision to fine Delta will ideally deter shipping companies from “taking the seas for granted.”

“The Indian coast is becoming increasingly vulnerable as there is significant increase in all types of oil tankers/bulk carriers/container ships passing through the Indian Ocean,” the applicants stated to the NGT while presenting cause and evidence for their case against Delta, Adani and other involved actors.

Additionally, the tribunal ordered Adani Enterprises to pay Rs 5 crore as “environmental compensation” and stated that the fine of Rs 100 crore “shall include the expenses incurred by the Coast Guard and other forces for the prevention and control of pollution in different ways, as stated above, caused by the oil spill and saving the crew etc.”

The judgment also ordered the formation of a committee to determine whether the ship’s wreckage needs to be removed from the site and to calculate the monetary cost of off-setting the ensuing environmental damage. Delta will have to remove the ship’s remnants within six months of the committee filing its report.

Implications of the verdicts

Dutta is hopeful that these judgments will help set a precedent for the future and deter private companies from functioning with impunity and under the cover of governmental apathy. The judgments in both cases acknowledged governmental inaction in dealing with environmental damage.

In the marine case, the NGT was “forced to come in”, said Dutta. Apart from the symbolic value of the judgment, imposing a fine on the polluter also shifts the monetary burden of rehabilitating the environment from the government to the responsible private company in question. “When the government handles rehabilitation, rescue and restoration projects in the aftermath of such cases, it draws from taxpayer money to do so” said Dutta. In the Alaknanda case, he hopes that the official acknowledgment of the fact that dams contribute to flooding will boost the cause for those who are against building dams.

He cited an academic paper by Maharaj Pandit and Edward Grumbine that states that the Himalayas are set to have the highest density of dams of any mountain range in the world. The paper, which was published in May 2012, states that the region’s dam density will be “nearly 62 times greater than current average global figures” and that the Himalayan average would be “1 dam for every 32 km of river channel”. This could greatly increase the danger of flooding and devastation in the area.

Dutta also noted that the Alaknanda dam implicated in this particular case has a capacity of 330 MW but dams with capacities as high as and over 500 MW can cause significantly larger amounts of damage in case of flooding or heavy rains.

While the two cases are similar in their use of the ‘polluter pays’ principle, the difference lies in the population affected. In the marine case, Dutta said the judgment on the 2011 oil spill, which mostly impacted the ecological system and not a particular community, has arrived “too late in many ways for rectifying the ecological damage.”

In the Alaknanda case, a specific group of people was directly affected by the action and inaction of Alaknanda Hydro Power and compensation will have to be distributed to residents of the affected region. Dutta thinks the efficient and organised distribution of the compensation by the government is the most crucial step that lies ahead.

Referring to both cases, Dutta explained that Indian “jurisprudence is not very well developed” when it comes to assessing environmental damage. He added that in such cases the “evidentiary burden also falls on the petitioners.” He acknowledged that though litigiousness is very common in Western countries and accommodated in their legal systems, this culture of litigiousness has not reached India in the same way. The overburdened status of Indian jurisprudence and the consequent slow processing of cases acts as another deterrent for potential petitioners or applicants.

Additionally, it has been rare for people affected by events such as the 2013 floods to seek help from the legal system. Dutta ascribed this to two problems. “First, most people don’t know that such forums exist. And the people who go through such events have already suffered so much” that it impedes their desire and resources for taking on such cases. Second, he added that the lengthy processing time of such cases is also a deterring factor. To sum up he said, “For all the damage that takes place, only a fraction is brought before the courts.”

Ramkishore Mankekar, the group head of corporate communications at GVK (the corporation charged in the Alaknanda case), wrote in an email, “We are contemplating to refer an appeal before the Supreme Court of India against the orders of the NGT.” There was no response from the Delta International Group.

Baxi commented on the possibility of the companies appealing, “Of course, there is a right to appeal to the Supreme Court. One hopes that the Supreme Court does not exercise the full appeals power and upholds the NGT decisional law by dismissing this at the threshold, if only to avoid the indictment of its robust ‘pro-environment’ approach that it has largely ‘upheld the concerns of middle-class environmentalism’ (as rightly said by Geetanjoy Sahu, Environmental Jurisprudence in India, at 67—68, Orient Blackswan, 2014).”