The 'Newton' Character That Missed Our Reviews – the Forest

If the jungles of Dandakaranya are seen as a character in the movie, it is fair to aver that democracy in the jungle has to follow the rules of ecology, local knowledge and custom.

A scene from the film Newton. Credit: Eros 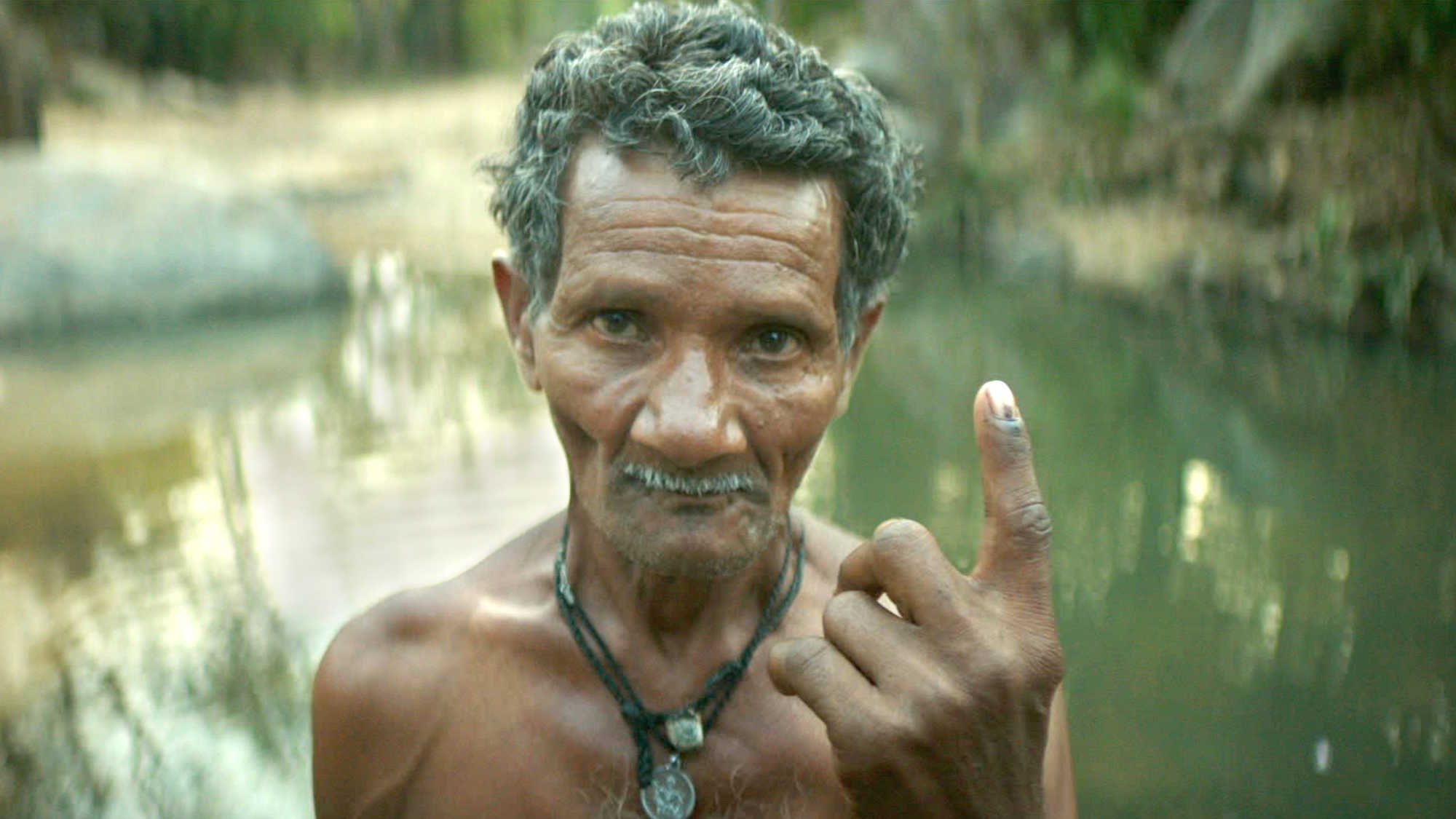 A scene from the film Newton. Credit: Eros

In Satyajit Ray’s acclaimed short story, Big Bill, the unflappable protagonist Tulsi Babu visits the forests of Dandakaranya to procure a medicinal herb that works like magic. In the same forest, he finds an egg-shaped object.

As he watches, the egg begins to hatch. “The head was already out of the shell. It was not a snake, nor a crocodile or a turtle, but a bird… Its purple wings were unique, as was its alert behaviour so soon after birth.”

The rest of the story is devoted to Tulsi Babu’s adventures with the newly born chick, named Bill – and what Bill actually turns out to be. The deep, primitive forest of Dandakaranya has nearly the same importance as Bill in the story. In the Ramayana, too Dandakaranya has symbolism: it is the abode of Dandak, a demon. Surpanakha, sister of Ravana, meets Lakshman here, which leads to decisive events in the epic. In both Ray’s world and that of the Ramayana, Dandakaranya forest is brimful of mystery, medicine and terror, and is ultimately unknowable.

It is poetic justice then that Newton, one of the best films to have released this year, has Dandakaranya in its backdrop. The way the movie characterises the forest and its resident tribals is significant for Hindi cinema. In creating a forest that encompasses both an urban and tribal gaze, the movie holds a nuanced mirror to oft-neglected ground realities.

As you watch Newton, you may be convinced that Dandakaranya forests are not just a backdrop but a protagonist, or character, altogether. The movie follows the story of an electoral clerk – named Newton – who sets up an election booth in Dandakaranya to cater to 76 tribal voters. The forest is formed for you, taking shape, menace and meaning through the accounts of others. For security agencies who are “carrying the weight of the nation” on their shoulders, the forests are a chessboard for Naxal guerrilla warfare.

This is both political and biological warfare: the security forces warn of both hidden ammunition and venomous snakes. Newton himself is the urban outsider, hopelessly adrift in the forest, trudging through painfully in his tight, dark formal shoes. And then there are the tribals, particularly Malko, Newton’s assistant for a day, who merge seamlessly into the forest, becoming one with the canopy and hidden paths, stripping down the menace seen by security forces and urban outsiders.

This creates an important prism to view both the understanding, and taking over, of the forest. Dandakaranya is “Naxal-infested” for the nation but it is also home to the Gond tribe. For non-tribals, it is at best a complicated question and, at worst, a thing that needs to be sanitised. This is a reflection of what is happening with tribals, who are viewed as complicating state-led ‘development’ and ‘mainstreaming’. The historian Upinder Singh argues that states have always had violent political arguments with forest-dwelling tribals. Naxalism or other contemporary insurgencies are not an exception.

“Now, as then, the forest remains a borderland with a difference. It does not lie on the margins of the state. It lies within it,” Singh writes in her new book, Political Violence in Ancient India.

For Newton, tribals are human beings with dignity, something he tries to hammer into everyone around him with sanctimonious fervour. “Aap inse aise nahi baat kar sakte (You can’t talk to them rudely),” he repeatedly says to the security forces. While the forces – represented by both the police and the paramilitary – view themselves as paternalistic towards the adivasis and the idea of India as unified nation-state. Expectedly, their narrative slips into threats and farce. Because no one gives a fig as to what the tribal really wants or thinks.

Speaking of figs: The movie has a deft ploy of contrasting traditional indigenous knowledge of the tribals with that of the outsiders. Which one will you privilege, the audience seems to be asked. The Gonds take figs, fruit, herbs and medicinal remedies from the forest. In one scene, Malko offers an ant-covered branch to electoral assistant Loknath after Loknath says he is scared of getting malaria in Dandakaranya. The ants will bite, the man will sweat and malaria will not take root in his body, Malko deftly adds. The ant-studded branch then becomes an extended olive branch, a coming together of forest wisdom and modern life.

Loknath, cleverly played by Raghubir Yadav, flatly refuses this peace offering. He is repulsed by the idea and also fairly disdainful – a metaphor for the way tribal knowledge is often looked at. In India, the Forest Rights Acts was enacted in 2006 to give access and sustainable use rights to forest-dwellers. Before that, the Biodiversity Act was brought about in 2002 as a means of capturing local biodiversity knowledge and ensuring local communities benefited first from commercial exploitation.

However, the road to sustainable livelihood has been and is long and hard. For years, activists have campaigned for bamboo (which is a grass) to be declared as not a tree but as grass – so that forest-dwellers can legally use and sell it. Tendu leaves also are an important forest produce but don’t always fetch the right prices. In the movie, when asked who they will vote for, the Gonds say they will support whoever gives them the best tendu leaf prices.

What does the audience make of this? Some may find it flippant. Others may find it just as spot-on as Delhi’s voters giving their votes to the Aam Aadmi party, which promised the slashing of electricity and water prices.

If the jungles of Dandakaranya are seen as a character in the movie, it is fair to aver that democracy in the jungle has to follow the rules of ecology, local knowledge and custom. If you look at the jungle like security forces in the movie see it, it is more Joseph Conrad’s Heart of Darkness. If you care to listen to tribal wisdom, the jungle is dignified, ordered, even magical, more like the depiction of the forest in the movie Avatar (2009), or in Satyajit Ray’s work.

Like Malko, exasperated by Newton’s blinkered, suffocating do-goodness, quips – establishing a link between a good deed and a benign jungle: “Koi bhi baada kaam ek din me nahi hota. saalon lag jate hai jungle banne me” (No big deed can be done in a day. It takes years to create a forest).”