In Neduvasal, a Push to Protect Farmlands Is About Holding the Government Accountable

While farmers, researchers and activists want politicians to be more transparent and honest, the government continues to say due process will be followed in Neduvasal. 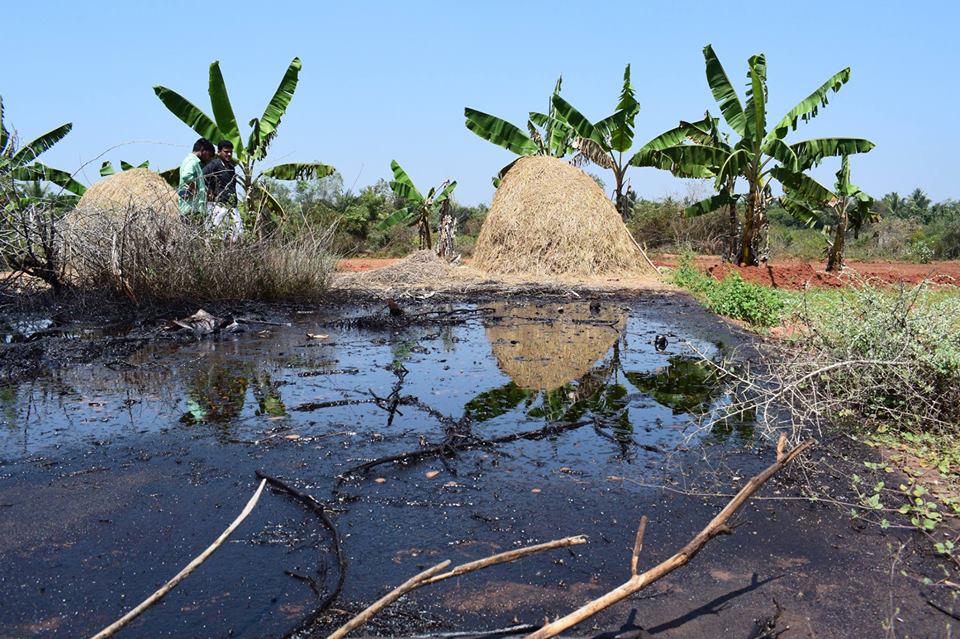 After jallikattu, Tamil Nadu is witnessing another massive protest in Neduvasal village of Tamil Nadu’s Pudukottai district. Thousands of farmers, students, environmentalists and activists are in attendance against a proposed hydrocarbon extraction project in active farm lands in and around the village.

On February 15, 2017, the Cabinet Committee on Economic Affairs chaired by Prime Minister Narendra Modi approved the awarding of contracts in 31 areas, including a disputed site in Neduvasal (for which Gem Laboratories was the successful bidder). As news of the proposed hydrocarbon project in the farmlands spread, farmers have raised their voices together in dissent. With a failed monsoon, Tamil Nadu had declared drought this January. The farmers who began the protest claimed that this project could only mean further depletion of groundwater as well as possible sea-water intrusion into their farmlands.

A former senior agricultural officer stated that, while Modi’s bid to produce clean energy within India was admirable, it shouldn’t take off by exploiting India’s farm lands. “The state has already been under the National Human Rights Commission’s scanner for rising farmer suicides and such development projects could only drive the farmers further to the brink. We cannot afford to lose any more farm lands.”

He added, “It has been only two years since the Tamil Nadu government rejected permission for extraction of coal bed methane in the Cauvery delta districts and their farmlands are again under threat again by a very similar project.”

The previous order had been issued after the state government upon recommendations of the expert technical committee appointed to study the impact of the proposed coal bed methane (CMB) extraction project of the Great Eastern Energy Corporation Ltd. (GEECL). Then Chief Minister J. Jayalalithaa had also written to the Centre to not permit such projects without consulting the state government first.

More recently, however, Modi’s statement at the Petrotech 2016 conference had given reason for social activists in Tamil Nadu to believe that the CBM project was starting to make its way back. Modi had stated, among other things, that the Centre has “come up with a new Hydrocarbon Exploration Licensing Policy (HELP)”. He said it would provide “for uniform license for exploration and production for all forms of hydrocarbon including shale oil, gas and CBM.”

Within a few days, Facebook and Twitter were rife with speculation on a proposed hydrocarbon project – even as northern coastal Tamil Nadu was forced to deal with an oil spill, which it did poorly.

In Neduvasal, the movement against the project was spurred by a Tamil rights activist group called the May 17 Movement, which had produced a video intended to galvanised support. Contributors to it said that information in the video had been put together from various case studies on similar projects from around the world. Paneer Perumal, a volunteer, said they had also gone from door to door and spread awareness about the need to stop methane project because it was going to be on agricultural lands.

The video went viral on WhatsApp and in Facebook groups. Some activists said it – and others like it – as well as memes and other visual material were crucial in the movement acquiring momentum as quickly as it did.

Apart from protecting their farmlands, the Neduvasal protests also stand for a rising lack of trust in the government – central and state – and its promises. S. Thirumurthy, a 39-year-old farmer from Sathyamangalam, about 300 km to the west of Neduvasal, said, “We cannot lose our fertile agricultural lands. You’ll have fuels that are made in India but what about food? Should we take food as pills? As such, the state is reeling from drought, these projects will only worsen the situation. Who will we turn to in case of a spillage? Why are farmers taken for granted? ”

He also alleged that the ‘water wars’ waged between Tamil Nadu and Karnataka were simply political gimmicks, often to assuage paper mills. “We do not want the government’s crop loans or minuscule subsidies, just leave us alone.”

Earlier, BJP national secretary H. Raja had appealed to farmers to not be carried away by “false propaganda by vested interests”. The Press Information Bureau (PIB) had backed it with a statement from the Ministry of Petroleum and Natural Gas, which had said that “concerns about adverse environmental impact on nearby areas and the people living there are also misplaced, as all petroleum operations require prior environmental clearances from the [environment ministry], wherein public hearing is an integral part of obtaining these clearances.”

Farmers in and around Neduvasal have been particularly wary of groundwater depletion and contamination. A PIB release on February 27, 2017, stated, “Oil and gas extraction are being carried out from deeper earth area (generally > 1,000 m), and thus [do not] affect ground water aquifers which are located at much shallower levels.”

“I see no direct impact on groundwater but overall operations such as storage or transport, if not carefully done, may lead to contamination,” Himanshu Kulkarni, a hydrologist and executive director of the Advanced Centre for Water Resources Development and Management, Pune, told The Wire. “I feel both sets of people, farmers and oil agencies, should take equal responsibility for the water.”

A former professor of ecology (who wished to remain anonymous) who had studied the agricultural impact of previous oil exploration operations in Tamil Nadu believes that the impact may have been been hyped up by activists and played down by the government.

“There’s a huge communication gap, there should be more transparency in the government process and all stakeholders should be scientifically informed. When these protestors could collect data and videos, so can the government,” he told The Wire. “If possible, the government should educate the public with case studies” from the past. He recalled that in one of his studies, his team had observed that such operations could reduce the yield in nearby farms, adding that compensation ought to be offered to farmers based on that data.

A geologist from Puducherry agreed: “We need to bring more transparency and accountability into the process. Poor handling of the recent oil spillage and floods has caused people to lose faith in the system. We can never say that there will be no impact, we need to talk openly about the remedial measures, and compensation, at the very beginning.”

In 2012, an oil leak in the cultivable lands of Keezhavelur in Nagapattinam district caused the lands to turn fallow for three years. Jayanthi Natarajan, then the environment minister, had intervened on the farmers’ behalf to ensure they received fair compensation. Even so, “there is no foolproof method when you are dealing with such issues, with many varying geological conditions,” according to senior hydrogeologist Christopher Jayakaran. “It is necessary to do sustained maintenance work and be adequately prepared for any crisis.” 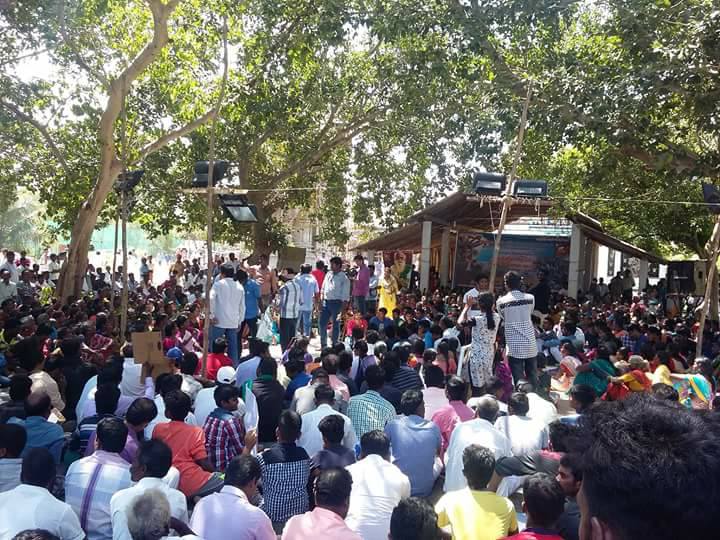 Protestors at a meeting in Neduvasal. Source: Author provided

Jayakaran has worked for over 40 years in Japan, Germany, Africa and other regions, and believes that crisis management is what we could be lacking in the most. “Will we adhere to the safety regulations in India is a million dollar question. Leakage of methane from pipelines – a problem throughout the world – has been reported and studied for years.” He quoted a report publicised in the New Scientist in September 1990, wherein natural gas pipeline mains in Great Britain had leaked so much methane that the leaks “contributed more to global warming than the burned gas” itself.

The February 27 PIB release further stated, “The process of drilling and production requires very limited surface land area (generally 120×120 sq. m) which will not affect agriculture or the soil of the entire lease area.” But Jayakaran has his doubts: he observed that the release does not indicate the number of well fields nor the number of production holes to be drilled. “This 120 by 120 sq. m is for one well. What about the distribution?”

Ajay Kansal, a deputy general manager of production at the Directorate General of Hydrocarbons, wrote in an email to this correspondent that the “PIB brief contained a general statement as per industry practice, considering the normal land requirement in on-land well-drilling operations. However, awardee operator requires firming up a detailed field development plan, as per their assessment, containing details of required drilling of wells and other facilities.”

Moreover, Jayakaran said, “The drilling of exploratory wells are likely to go down to 6,000 m and unless a very careful drilling methodology, development and designs are used, there is no guarantee that the aquifers, even if they were shallow, will not be affected.”

“If fracking or hydraulic fracturing is used, the problem of gas leak and pollutants mixing with the groundwater are real and the damage is irreversible,” he added. “One major cause of gas contamination is improperly constructed or failing wells that allow gas to leak from the well into groundwater. Another potential avenue for groundwater contamination is natural or manmade fractures in the subsurface, which could allow stray gas to move directly between an oil and gas formation and groundwater supplies.”

However, Kansal said, “It is not certain the whether hydraulic fracturing will be used for stimulation of well or not at present. This will be known in due course of time, being widely used through the world. Since the depth of reservoirs in these fields are deeper (>1,500 m), there is no likely possibility of contamination of the water table.” He then reiterated that environmental impact assessments, and the public hearings therewith, will have to be conducted before any work could begin.

Tamil Nadu’s incumbent chief minister, Edappadi K. Palaniswami, has said that “the state government has not granted any license to commercially extract natural gas at Neduvasal.”

With inputs from Ramesh Kumar.