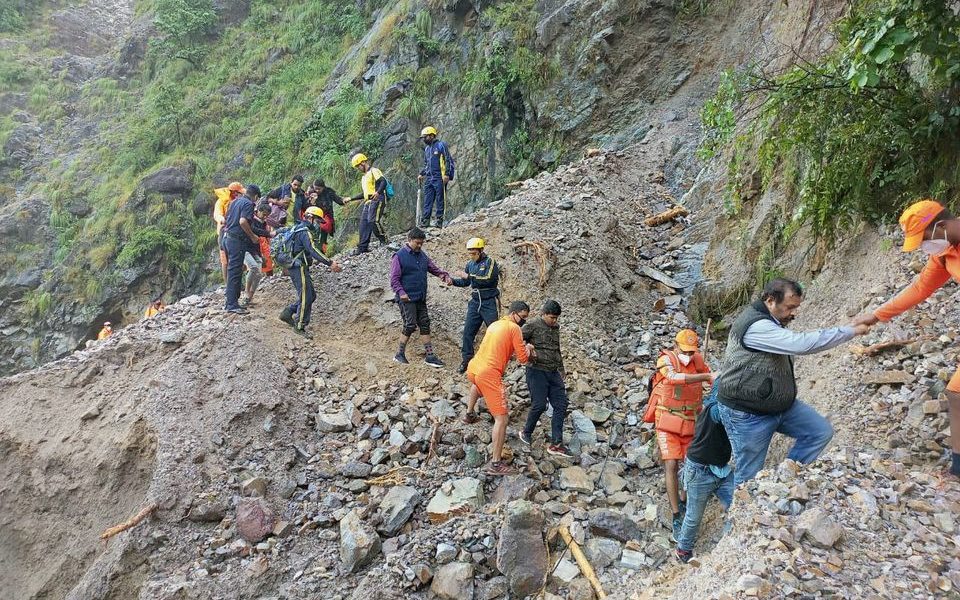 New Delhi: Heavy rains lashed several parts of Kerala after a brief lull prompting the authorities to issue fresh alerts on Thursday, while the death toll in Uttarakhand which has been battered by a heavy spell of precipitation this week rose to 65 with the death of five tourists in Kumaon region.

Union Home Minister Amit Shah conducted an aerial survey of Uttarakhand’s rain-ravaged areas to assess the damage that the state government has pegged at Rs 7,000 crore.

More than 40 people have been killed in Kerala.

A ‘Yellow alert’, predicting isolated heavy rainfall, was issued for Thiruvananthapuram, Kollam, Alappuzha, Ernakulam, Thrissur and Kasaragod districts for the day, according to  the IMD.

Fishermen were advised not to venture into the sea in the state as squally weather with wind speed reaching 40-50 kmph is likely to prevail over Kerala coast.

The southern state was ravaged by heavy downpour and subsequent landslides in the south-central districts on October 15 and 16 which resulted in the loss of 42 lives and six people going missing.

Experts attribute the extreme weather events to various causes, including warming of the seas, unabated development and delayed withdrawal of the monsoon.

In Uttarakhand, he explained, the interaction between western disturbance and the low pressure area resulted in heavy rains this week.

Five tourists have died in Kapkot in Uttarakhand’s Kumaon, officials said on Thursday as the death toll in the northern state battered by the recent rains rose to 65.

The confirmation about the death of tourists stranded near Kapkot’s Sunderdhunga glacier in Bageshwar district came on a day when Union Home Minister Shah conducted an aerial survey of the rain damage.

Earlier, the official count of the dead was 60.

Apart from the five dead, one tourist was missing, officials said. Four were rescued.

“About 65 tourists had been trapped on the higher reaches of Bageshwar and rescue teams were at work to bring those still remaining there to safety,” officials said.

Amit Shah told reporters at the Jollygrant Airport in Dehradun that the alertness of the central and state government agencies helped contain the damage in Uttarakhand.

Relief and rescue operations continued in the worst-hit Kumaon region amid efforts to restore connectivity and evacuate people from vulnerable areas.

“Restoring the network of damaged roads and bridges and evacuating people to safety is the priority at the moment,” he said. At 28, Nainital district has reported the maximum number of deaths.

Shah said a heavy rain alert was issued well in advance and led to precautionary steps like halting the Chardham Yatra.

“The damage could have been more if this was not done. Timely mobilisation of search and rescue teams and arrival of Indian Air Force (IAF) helicopters to assist in rescue operations helped minimise the potential damage,” the home minister said.

He did not announce any immediate relief package for Uttarakhand and said a detailed estimate of the loss needed to be made first.

He said the state was given Rs 250 crore a month ago considering its vulnerability to natural disasters and that can take care of the relief and rescue measures currently underway.

Meanwhile, the Chardham Yatra, which was temporarily halted on October 18 due to the heavy rain alert issued by the meteorological department, resumed with pilgrims leaving for Kedarnath, Badrinath, Gangotri and Yamunotri from Rishikesh Chardham bus terminal and Haridwar bus stand.

Heli services for Kedarnath have also resumed. The weather at the Himalayan temples is chilly but there is no rain.