In its note, the finance ministry, particularly, had made it clear that the decision would create a financial burden which the Centre was not in a position to take.

Opening up rivers for transportation would mean significant hazard to ecology as well. Photo: Inland Waterways Authority of India

This is the first article in a two-part series on the national waterways. Read the second part here.

The decision to declare 106 waterways of the country as “National Waterways” was met with strong opposition from the Centre’s two major departments, the NITI Aayog and the Ministry of Finance.

The Ministry of Shipping had been expressly warned that it would not be right to declare any waterway a National Waterway without proper prioritisation and extensive deliberation. It had also been told that if such a huge number of waterways are declared National Waterways, it will become a huge financial liability on the Centre and can cause irreversible damage to the aquatic ecosystem.

The Wire has accessed official documents received after filing an RTI request, which reveal that the finance ministry had strongly objected to the decision to declare so many waterways at one go. A portion of the Finance Ministry’s letter.

A close scrutiny of the file notes and official correspondence has also revealed that the finance ministry’s comments were not tabled before the Union Cabinet for consideration when the Cabinet approved the proposal for National Waterways Bill, 2015 on March 25, 2015.

Replying to the Draft Cabinet Note (DCN) sent by the Ministry of Shipping on December 19, 2014, the Finance Ministry’s Department of Expenditure stated on March 23, 2015, “It would be very expensive for the Central government to undertake development of all waterways if they are declared ‘National Waterways’. Only very large waterways should be declared National Waterways. The medium and small waterways should be declared ‘State Waterways’ and it should be the responsibility of state authorities to maintain them.”

The Ministry further wrote, “The creation of National Waterways will entail heavy financial burden in terms of ensuring minimal water flow by dredging, river training and creating a conducive navigation atmosphere by way of channel markings, nighttime navigational aids, GPS, river maps and charts, and also building of docks and making available the vessels and associated infrastructure, including terminal construction.”

Ministry of Finance Comment… by The Wire on Scribd


The Ministry pointed out that for dredging a stretch of one kilometre of a river, an expenditure of Rs 10-12 crore will be required. “The financial implications for developing these National Waterways will be in thousands of crores, which may be difficult to meet in face of competing demands of other development or flagship programmes.”

It is noteworthy that the Ministry of Shipping is now implementing a plan to develop 111 National Waterways (including five previously announced National Waterways) in 25 states. The Bill was passed under the then shipping minister, Nitin Gadkari.

The finance ministry had suggested that the total estimated financial burden of all proposed waterways be clearly indicated so that an informed decision could be taken. However, the shipping ministry rejected this demand and said that the proposed amount will be assessed on a case-to-case basis after the Act is brought.

The ministry said that there may be irreversible damage to the aquatic ecosystem with development efforts and navigation in the river stretches. Adequate studies need to be undertaken to determine the environmental impact of such commercial interventions, it stressed.

Of these five, only the first three waterways have been functioning properly. Operations have not yet started on the remaining two.

In its two-page note, the finance ministry asked the shipping ministry to provide the details of statistics on traffic volume of cargo and passengers on the five waterways before and after they were named National Waterways.

The experiences of these National Waterways in terms of success and shortcomings needed to be understood before designating more waterways as National Waterways, it said, pointing out that the traffic in the five NWs is still very sparse. 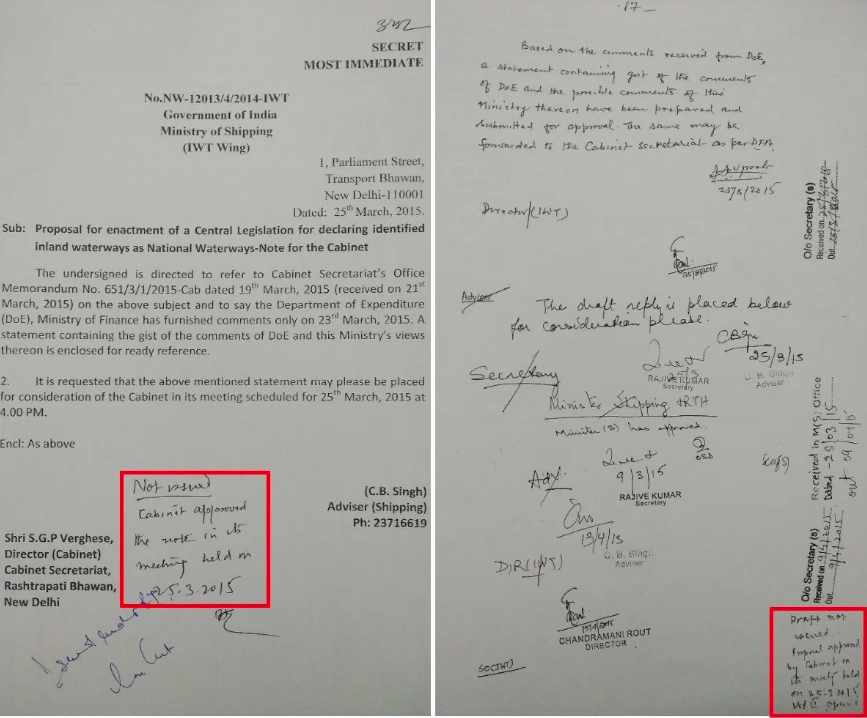 This draft note was prepared on March 25, with the comments of the finance ministry, but was not released.

In fact, these comments of the finance ministry were prepared but not tabled before the Union Cabinet in the meeting held on March 25, 2015 to discuss the National Waterways Bill, 2015.

It is clear from the file notes and correspondence accessed by The Wire that along with the finance ministry’s objections and the response of the shipping ministry, the draft note prepared on March 25 should have been tabled before the Cabinet.

The cabinet approved the proposal without it on the same day in March 2015.

Not only the finance ministry, but the Niti Aayog too had objected to the proposal. The Ministry of Water Resources, River Development and Ganga Rejuvenation (now known as Ministry of Jal Shakti) had also raised some objections to it.

In its reply dated February 5, 2015, Niti Aayog said that the basis of the identification of inland waterways as NWs had not been discussed.

In its letter, the transport department of Niti Aayog said, “First of all, some broad parameters should be laid out for declaring any river as National Inland Waterway, such as industry linkages, the environmental impact assessment, the draft availability around the year, navigability, etc.” 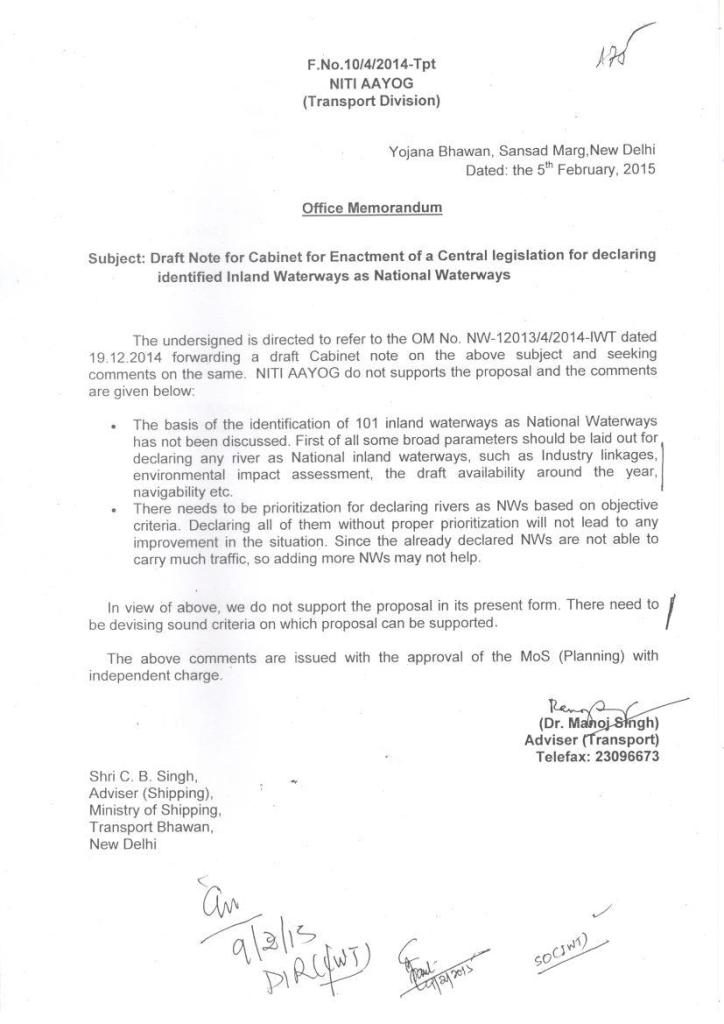 The Niti Aayog further added, “There needs to be prioritisation for declaring rivers as NWs based on objective criteria. Declaring all of them without proper prioritisation will not lead to any improvement in the situation. Since the already declared NWs are not able to carry much traffic, so adding more NWs may not help.”

The finance ministry had also emphasised the same in its letter.

Meanwhile, another letter obtained under RTI which was issued by the Ministry of Water Resources, River Management and Ganga Rejuvenation on January 30, 2015, stated a need to estimate the ‘quantum’ of water to maintain a minimum depth.

However, the shipping ministry rejected this demand as well, even though the parliamentary committee had also recommended it.

The water ministry wrote, “There is a need to estimate quantum of water required on a week/10-days basis throughout the year to maintain the minimum depth of water in the proposed river stretches/canals for navigability in order to ensure that drinking, irrigation and other demands of water do not get impaired.”

The water ministry further stated, “Technical feasibility in consultation with this ministry may first be established before preparing detailed project reports/undertake any works in any river/river stretch.” 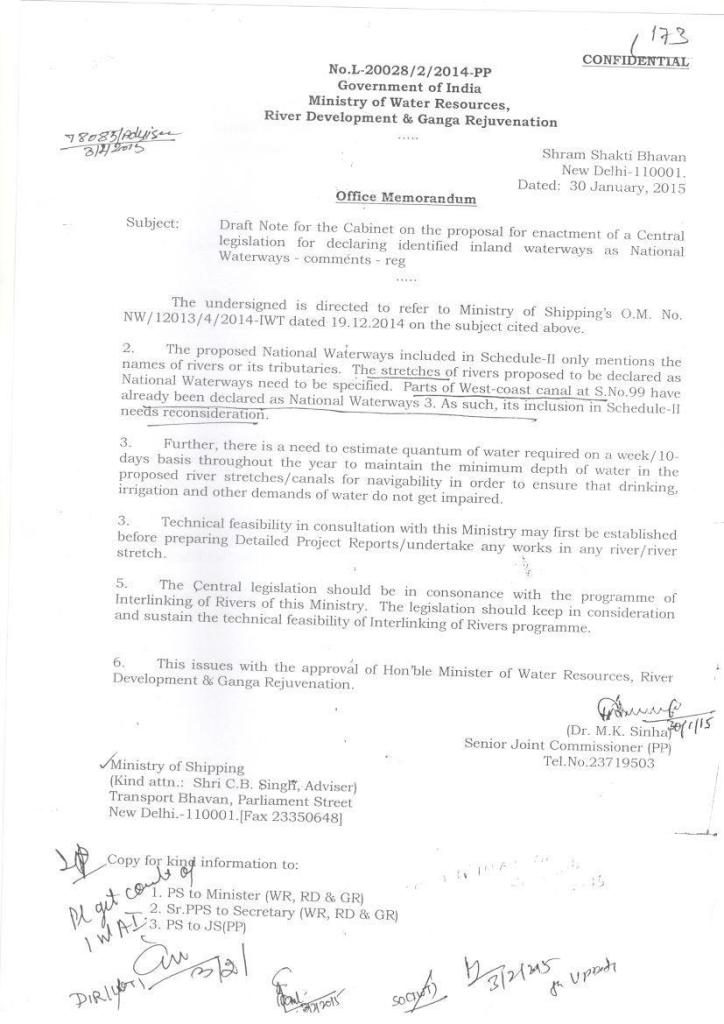 The cabinet gave its approval to declare 101 waterways as National Waterways on March 25, 2015. The Bill was presented in the Lok Sabha on May 5, 2015, after which it was sent to the parliamentary committee on travel, tourism and culture.

On August 12, 2015 the committee submitted its suggestions regarding the bill following which the shipping ministry amended the bill, incorporating some of the suggestions and proposed to declare 106, instead of 101, waterways as National Waterways.

Also read: Dammed and Mined, Narmada River Can No Longer Support Her People

After the Bill was examined by the parliamentary committee, the Ministry of Shipping again sought suggestions from all the ministries. Documents obtained through RTI show that this time as well the finance ministry and NITI Aayog did not support the move.

The water ministry and the environment ministry also raised some objections. The expenditure department of the finance ministry wrote, “Such a blanket in-principle approval for the declaration of all inland waterways as National Waterways may be against the spirit of the Schedule 7 of the Constitution.”

The finance ministry further advised the Ministry of Shipping to explore the possibility of encouraging promotion of inland water transportation by the state governments as all three lists under the Seventh Schedule contain ‘inland waterways’, which means, by implication, only a few selected waterways can be named as national waterways, while the others will be state waterways.

Ministry of Finance and NIT… by The Wire on Scribd


The finance ministry also stated that there was no need to declare such a huge number of waterways as national waterways. It requested the shipping ministry to prioritise the inland waterways in view of the strategic and connectivity importance of the stretch and moot the proposal for a limited number of waterways, considering the expected increase in traffic flow.

Repeating one of its previous clauses, the finance ministry warned the shipping ministry about the financial implications of the decision stating that the creation of National Waterways will entail heavy financial burden on the government of India and it will be impossible to provide funds from its resources for development of the waterways.

Meanwhile, in its comments, for the second time, the Niti Aayog reiterated that declaring such a large number of rivers at one go without any rigorous study is not a good strategy. Citing the World Bank, it claimed that a much more nuanced approach of developing specific stretches of waterways based on traffic potential, rather than engineering design criteria is called for.

Niti Aayog wrote, “Both financial and technical capacity is simply not available to develop all the national waterways unless there is a well thought out phasing depending on traffic potential and commercial justification.”

In its reply dated October 9, 2015, to a note sent by the Ministry of Shipping, the environment ministry pointed out that some of the rivers included in the Bill are not perennial and do not have sufficient quantum of water due to which the feasibility of navigation or shipping in those rivers is doubtful.

The ministry suggested that therefore technical and economic feasibility of such rivers should be studied before they are included in the Bill. However, the shipping ministry said that once the Bill is passed such a study will be carried out on any river before development work starts.

Keeping in view the urgent need for developing a supplementary or alternate mode of transport on waterways, the excessive time taken for declaring waterways as National Waterways needs to be curtailed, it said. The present exercise of declaring 106 waterways as National Waterways is primary to avoid the time being wasted in making individual legislations for each waterway, it claimed.

However, documents accessed by The Wire reveal that it will take another nine to 10 years for actual work to start on the waterways even after they have been declared National Waterways. The ministry’s draft cabinet note mentions that it will take two to three years to obtain clearances and financial approvals for environment and wildlife after the formal declaration.

Environmental activists also believe that if National Waterways are constructed without extensive deliberations, the health of the river and the life in it will suffer.