Nagpur and Chhindwara, home districts of the chief ministers of Maharashtra and Madhya Pradesh, respectively, face a water-shortage on the cusp of becoming an interstate problem. 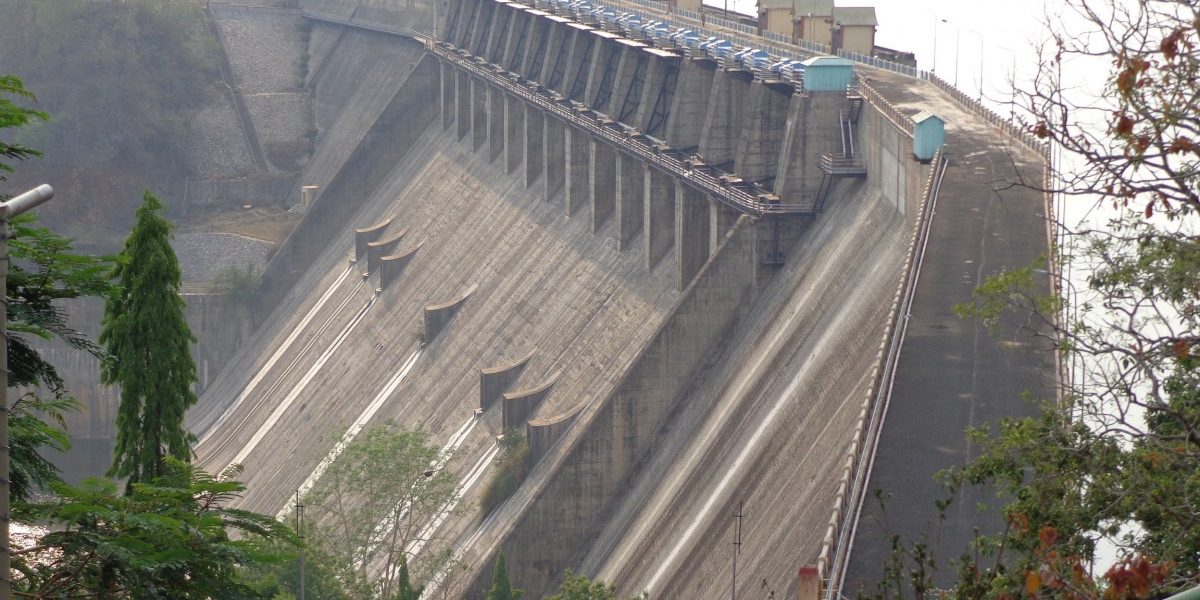 A panoramic view of the Totladoh dam. Photo: Nitin Bhagwate/Wikimedia Commons, CC BY 3.0

After a delayed start and more than a month into the monsoons (as of the second week of August), the deficient rainfall in central India has precipitated a precarious situation in two districts in particular. Nagpur, the home district of Chief Minister Devendra Fadnavis in Maharashtra, and Chhindwara, the home district of Chief Minister Kamal Nath in Madhya Pradesh, are fighting over their share of water from the Pench river.

In Nagpur, the local municipal corporation (NMC) bet on healthy rains and supplied water daily during the summer. However, by mid-June, it was clear that a crisis was at hand when the Gorewada lake, the reservoir that stores and supplies water to Nagpur city, went dry.

There were some rains last week and Gorewada began to fill up slowly, but this is not expected to last. This is because the reservoir on the Totladoh dam, located upstream of the lake and near the border between Maharashtra and Madhya Pradesh, has been running low.

Nagpur’s current situation is fairly unprecedented. The Gorewada lake last ran dry 116 years ago. The city was in a tight spot more recently in 2011 but was saved by rain.

Its population of three million usually receives 650 million litres/day (MLD) from the Totladoh dam reservoir and another 550 MLD from another reservoir in Navegaon Khairi. This year, after the monsoon shortfall, the NMC began restricting the supply of potable water to alternate days on July 17. The arrangement continues as rainfall in the catchment area of its dams, which falls lies on the Madhya Pradesh side, has been wanting.

In fact, not just this year and not just in summer, many towns and cities across Vidarbha – such as Yavatmal, Akola, Amaravati, Chandrapur and Wardha – haven’t received and don’t receive clean water on a daily basis in the March-July period. The people of have received water once every four days in March, once every five days in April and once every eight eight days in May. Akola’s residents have been receiving water once every 20 days. Nagpur and almost all of these towns have a sizeable number of dug wells but bank more on bore-wells.

Similarly, lower rainfall in Chhindwara and its neighbouring districts – which together form the catchment area for all rivers that flow south towards Maharashtra – has increased their reliance on the Pench. Chhindwara, in particular, used to receive its water from the Kanhargaon dam, but it ran dry earlier this year. So the Madhya Pradesh government commissioned supply from the newer Chaurai-Machagora dam in March.

Meanwhile, in Vidarbha, i.e. eastern Maharashtra, Yavatmal received -27%, Washim -23% and Gondia -20%. Nagpur, Bhandara and a few others received deficient rains till the end of July. Relative rainfall in Chhindwara and Nagpur between June 1 and August 11, 2019. Credit: IMD

In this scenario, the Chaurai-Machagora dam has become a flashpoint of the disagreement brewing between the two states. The Chaurai-Machagora is located upstream of the Totladoh; apart from supplying water to Chhindwara, the state administration hopes it will serve as a power production centre for the region. Maharashtra has claimed that Madhya Pradesh has, as a result, trapped the Pench’s water at the upper dam and that very little now descends to the Totladoh.

Nanda Jichkar, the mayor of Nagpur, supported the complaint, that there has been a shortage since Madhya Pradesh built the new dam. “It is not just a question of Nagpur city but it is also a problem for Nagpur’s rural areas being deprived of water for irrigation,” she told The Wire. “The water-sharing agreement states that we will get water after Chhindwara’s needs are taken care of. What we are demanding is only that share.”

“But it is an inter-state issue and our higher-level leaders are taking it up with Madhya Pradesh.”

On the other hand, an official from Chhindwara said, “Maharashtra should have no problem after we built Machagora dam. There are about a dozen-odd rivers that fall into Pench river and feed the Totladoh reservoir. So even if we impounded waters upstream, Totladoh gets filled. The problem this year is because there have been no rains in the catchment.”

The prevailing water-sharing agreement, dating from the 1960s, presumes a total inflow of 60 TMC. It provides 35 TMC of water from the Pench river to Madhya Pradesh and, if this is fulfilled, Maharashtra receives 25 TMC. Madhya Pradesh’s share was reduced to 28 TMC after the Chaurai-Machagora came up.

“The 25-35 TMC agreement is for the lean season,” Gajadhar Sunaiya, the chief engineer heading the inter-state water agreement unit of the Madhya Pradesh Water Resources Department, said. “For the rest of the year, we … release more than 35 TMC for Maharashtra. We are yet to tap … our full capacity and even now, we are not using our entire 25 TMC share, and are releasing it for Maharashtra.”

In response, the CWC constituted a five-member committee a few months ago to rework the existing agreement between the two states. Its first task is to undertake a comprehensive hydrological study to ascertain the amount of water in the Pench basin, amid widespread suspicion that it may have dropped.

“Only after that [water availability] is ascertained, we can [talk] about the water sharing part,” C. Lal, chief engineer of the hydrological studies organisation at the CWC, told The Wire.

However, the committee hasn’t met even once till date. “I am going to convene the first meeting soon,” Lal said.

Meanwhile, urban and rural Nagpur, together with all of Vidarbha, are nervous. 2018 was a severe drought year, and the region’s farmers are not prepared for a repeat. After food, hospitals have been the next big casualty. A week after the NMC began rationing potable water, the city’s Government Medical College and Hospital (the largest in central India), the Indira Gandhi Medical College and the NKP Salve Medical College and Hospital were all asked to arrange for their own supply. As a result, these institutions postponed or cancelled numerous surgeries and forced patients to seek treatment elsewhere. The situation eased a bit when the city received some rain in the last week of July.

On the flip side, at least according to the NMC, officials have started promoting the construction and use of rainwater harvesting systems. NMC’s water resources department has written to all major bulk water consumers, including the airport, railway station, hotels and big hospitals, to install these systems. It has also asked any entity that consumes more than one lakh litres a day, including all colleges with hostels, to install sewage treatment plants to reuse water.

“Otherwise, we have threatened to charge them twice,” Shweta Banerjee, a chief engineer at the water department, said.

“We also carried out a survey … in case the rains are further delayed. We identified dug wells, especially public wells, that can be used to supply water to slums.”

Finally, the NMC is set to continue the ban on the use of treated water for any kind of construction activities, including for the Nagpur Metro.

Nivedita Khandekar is an independent journalist based in Delhi. She writes on environmental and developmental issues. She is on Twitter as @nivedita_him.