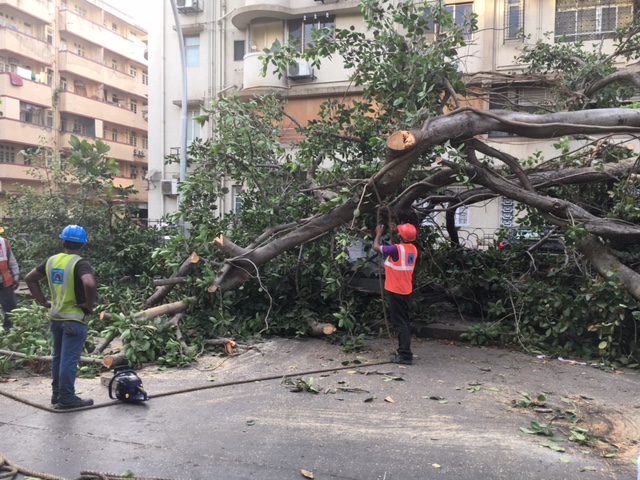 An old tree freshly hacked to make way for the construction of a Metro line in Mumbai. Credit: Wire staff

Prayers, protests, tears-Mumbai’s tree lovers tried all these but in the end have not been able to prevent the hacking of several old trees to make way for the Metro 3 project. After a stay order issued by the Bombay High Court was vacated, contractors for the Metro 3 project have moved swiftly to bring down trees that have stood for decades.

The Mumbai Metro Rail Corporation Ltd (MMRCL), which is spearheading this ambitious project on the north-south axis says cutting the trees is necessary. Activists say that the Corporation is refusing to listen to reason-many a tree need not be hacked at all. “They are taking short cuts to save costs—on such a broad road, why cut trees on both sides?” asked one activist who has seen these trees grow.

For the last few days, in different parts of the city, workers have been using motorized hacksaws to bring down the magnificent gulmohar and banyan trees. For a day or two this was done late into the night; now they work during the day. Near Churchgate, a busy suburban train terminus, crowds gathered on Wednesday, as a giant of a tree came down and the workers went about their job with clinical efficiency. A few tree lovers gathered on the spot meditated and muttered prayers. “Let us gather to send these gentle, grand beings our blessings and offer them our thanks,” said a message on a WhatsApp group that has been monitoring the cutting of trees.

According to the activists, about 5000 trees will eventually be cut along the 33 km route of the Metro, which is expected to cost over Rs 23000 crore. MMRC chairperson Ashwini Bhide has been mentioning a figure of around 2800 trees and has said that while the loss of these trees “looks horrifying, the net environmental impact will be positive,” because of the savings on fuel consumption. 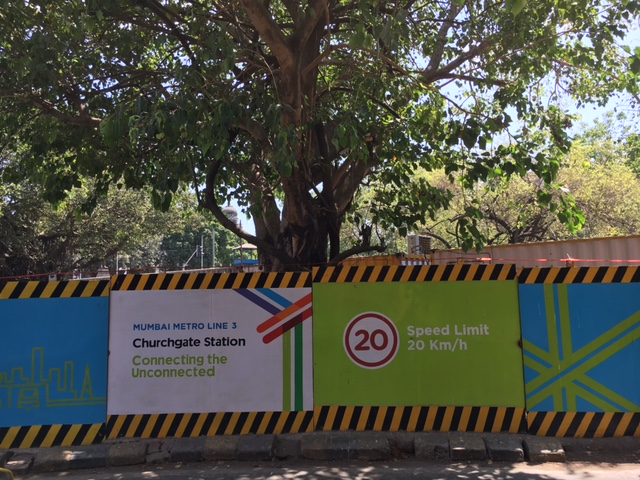 Mumbai’s trees are being cut as part of the construction of a Metro. Credit: Wire staff

A bigger worry, environmental activists say, is the MMRC’s acquisition of land in the Aarey, a verdant green area in the north spread over 3160 acres of land. The Metro project has obtained 28 hectares for a car shed. But there are fears that this will set off concretization by way of commercial and even residential buildings. The Save Aarey Group website says that not just the Metro, there are plans to drive a road through the area and eventually build a business hub there. Mumbai, a concrete jungle with minimal green cover, will now lose hundreds of trees that provided shade to citizens.

The anti-hacking activists are scheduled on Friday to meet a two man committee set up by the Bombay High Court, but by then many trees would have been gone forever. “A centuries old banyan tree was hacked down in central Mumbai. It’s very sad,” an activist said. The Wire tried to contact the MMRC for clarifications but got no response.