Most Forest Fires in India Are Due to Human Activity

Over 30,000 forest fires were reported in India in 2019. Experts recommend that fire management should focus on prevention not suppression and tribal communities should be roped in for effective management.

A fire line is being burnt as preventive measure, an important exercise conducted in February-March. Photo: UP forest department

Miles away, in India, wildfires have raged on in the past few years as well, causing extensive damage. In February 2018, it took five days and the mobilisation of huge resources including Indian Air Force choppers to douse the fire at Bandipur Tiger Reserve in Karnataka. An estimated 4,800 hectares of forests were lost in the incident. The very next month, in March 2018, a group of trekkers got caught in a fatal wildfire at Theni, Tamil Nadu. The state went on to impose a ban on trekking in forests between February 15 to April 15, considered as fire season.

According to the India State of Forest Report 2019, over 30,000 incidents of forest fires were reported in India in 2019.

Additionally, more than 36% of Indian forest cover (657,000 sq km area) is prone to frequent forest fires and of this, 10% are highly prone, according to a Forest Survey of India (FSI) report on fire prone forest areas. Around 21% of the total forest cover is highly to extremely fire prone, adds the latest forest survey.

The dry deciduous forests, which receive low rainfall, face 5-6 dry months and have nutrient poor soil, such as those in tropical and subtropical latitude, are more vulnerable to fire compared to others. These areas are in Odisha, Chhattisgarh, Madhya Pradesh and in the southern states. Chir pine forests in hilly states are equally prone.

“Over 40% of Uttar Pradesh forests are susceptible to fire. Among the major forests’ zones of Vindhya region, Bundelkhand and Terai, the subtropical forests of Terai region (which lies alongside the Nepal border) is the most fire prone one,” said Ramesh Kumar Pandey, chief conservator of forests and secretary of Uttar Pradesh Biodiversity Board. As per the FSI technical study, about 37.5% of forest cover in Uttar Pradesh is between moderately to extremely fire prone. 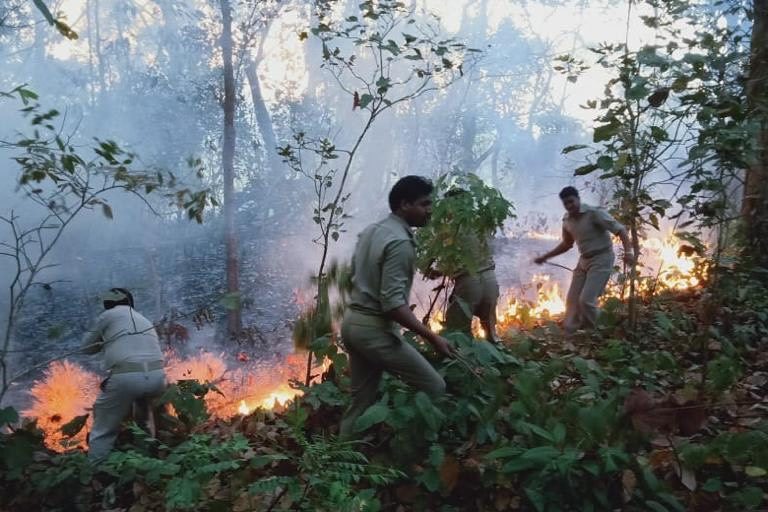 Most forest fires in India because of human activity

In India, fires are primarily caused by human activities, notes the FSI technical study, with over 95% of fire incidents of anthropogenic origin.

In parts of India where tendu leaves are part of the tribal economy, there are different reasons for setting fires. Virendra Tiwari, additional principal chief conservator of forests in the  Maharashtra Forest Department, said, “Collectors of tendu leaves often set fires in the summer months to promote a better flush of leaves. Forests are torched in revenge as well especially when people are evicted from forests or removed from daily wage work. Most of these fires are surface fires and easily manageable. Sometimes it goes out of hand.”

Some forest fires also start from natural causes like lightning and friction of dry bamboos.

“Fuel is the most important factor in wildfire. Dry leaves, weeds and bushes act as fuel in dry summer season. It is the responsibility of forest department to keep forest free from fuel before the fire season starts,” said Raman Sukumar, professor at the Centre for Ecological Sciences at the Indian Institute of Science, Bangalore.

Meanwhile globally, as the frequency and severity of wildfires go up, climate change has been attributed as one of the reasons for aggravating fires.

According to a recent study by British scientists who reviewed 57 research papers, there is a link between climate change and increased frequency and severity of fire weather.

“Rising global temperatures, more frequent heatwaves and associated droughts in some regions increase the likelihood of wildfires by stimulating hot and dry conditions, promoting fire weather, which can be used as an overall measure of the impact of climate change on the risk of fires occurring,” states the report which underscores that human induced warming increases the fire risk.

India is grappling with same climate conditions at present. The frequency and the area under concurrent drought and heatwaves is more in recent years (1981-2000) compared to an earlier time period (1951-1980) in India, a study stated.

Forest Survey of India monitors forest fire events through satellites on two platforms- MODIS and SNPP-VIIRS, both in collaboration with the US National Aeronautics and Space Administration (NASA) and Indian Space Research Organisation (ISRO). While the SNPP-VIIRS identifies, alerts and tracks fire incidents on real time data at 375X375 sq meter pixel, the older version MODIS detects it in the range of 1kmX1km. Forest fire suppression relies very heavily on “dry” firefighting techniques because of poor water availability.

Ramesh Pandey said, “To contain the fire, fire lines (a passage or road, cleared of all vegetation) are created to save neighbouring compartments. Sometimes a counter fire is used to extinguish the uncontrollable fire. In this, a linear patch is cleared of combustibles and manned. When wildfire come closer, then all the people manning the line set fire to the line simultaneously. The counter fire rushes towards the wildfire. As soon as the two fires meet, the blaze is extinguished.” In some areas, beating bushes and leafy green boughs are also used for extinguishing fire.

Also read: The Greed for Timber, and Climate Change, Have Made Himalayan Foothills a Tinderbox

Experts recommend that the focus of fire management should be on prevention not suppression and tribal communities living in forests should be roped in.

CES’s Sukumar said that the colonial mindset of forest administrators comes as a major hurdle in management of forests. “Fires have been used since millennia to change the landscape use and also as a preventive measure to clear combustible materials. Since forests were acquired by the government during British rule, the jungle dynamics changed forever,” he said. “The colonial mindset continued even after independence where the entire focus is on detection and suppression of fire instead of prevention. The fires suppression policy is doing more harm than good to the tree-grass ecosystems. Forest departments should rope in tribals and use their traditional knowledge to manage the forests more effectively.”

Pravin Mote, who heads the Centre for People’s Collective which focuses on environment issues in Maharashtra, said, “The forest department was set-up to generate revenue. They focus on this aspect only. That they have to talk about conservation, ecosystems and climate change is a compulsion.” Mote adds that the presence of forest communities and domestic animals helps suppress the inflammable material in jungle. “Our study has found that the areas of Gadchiroli (Maharashtra) where community forest rights have been granted, fire incidents have come down by 70%.”