The project is less than two kilometres away from the boundary of Kali Tiger Reserve which is home to several rare and endangered species of animals.

Clearing the final hurdle in the expansion of the capacity of the Kaiga Atomic power plant in Karwar area of Karnataka, an expert wildlife panel led by the Indian government’s environment minister Prakash Javadekar has recommended wildlife clearance to it.

The project related to setting up of pressurised heavy water reactor-based nuclear power plant with installed capacity of 1,400 megawatt (MW) comprising of two units of 700 MW each in the existing premises of 54.09 hectares at Kaiga plant located 1.30 kilometres away from the boundary of the Kali Tiger Reserve got the go-ahead in the meeting of the Standing Committee of the National Board for Wildlife (SC-NBWL) on August 29, 2019.

Nuclear Power Corporation of India Limited’s (NPCIL) Kaiga nuclear power plant is operational in the Karwar area of Uttara Kannada district in Karnataka. In 1992, it received environmental clearance from the Ministry of Environment, Forest and Climate Change (MoEFCC) for setting up six units of 220-megawatt capacity each. At present, the units 1-4 (of 220 MW capacity each) are operational.

In August 2019, NPCIL secured environment clearance from the MoEFCC for setting up units 5 and 6 with an enhanced capacity of 700 MW each. At present, NPCIL has 1,665 hectares of land for the project and it told the MoEFCC that the new units do not involve the acquisition of more land. It’s estimated cost is over Rs 200 billion and about 8,700 trees are expected to be felled for the project.

NPCIL has maintained that the operation of the nuclear power plant at Kaiga has a “very insignificant impact on the overall biodiversity of the region.” It also held that “there is minimum impact expected from both radioactive and non-radioactive effluent of the plant on the Kali river.”

As per NPCIL, the major benefit of the project is the generation of 1,400 MW of “clean power to meet the growing energy demand of the country” and that 50 percent of the energy generated from the units 5 and 6 would be for Karnataka.

The expansion capacity of the project had already been greenlighted by Karnataka’s Chief Wildlife Warden who had stipulated that the work “shall be taken up only under the close supervision of the jurisdiction officers and staff to avoid any damage to the flora and fauna.” The State Board for Wildlife (Karnataka) has also recommended wildlife clearance to the project in its meeting in January 2019.

As the project is adjacent to a tiger reserve, the National Tiger Conservation Authority (NTCA), which is India’s apex body for protection and welfare of tigers, was also involved. The NTCA also recommended the project and imposed ten conditions to protect the flora and fauna of the area.

“After discussions, the standing committee decided to recommend the proposal, subject to the conditions that the project proponent will comply with all the conditions imposed by the State Chief Wildlife Warden and the NTCA,” noted the minutes of the SC-NBWL’s meeting while stressing that an annual compliance certificate on the stipulated conditions be submitted every year to show compliance. 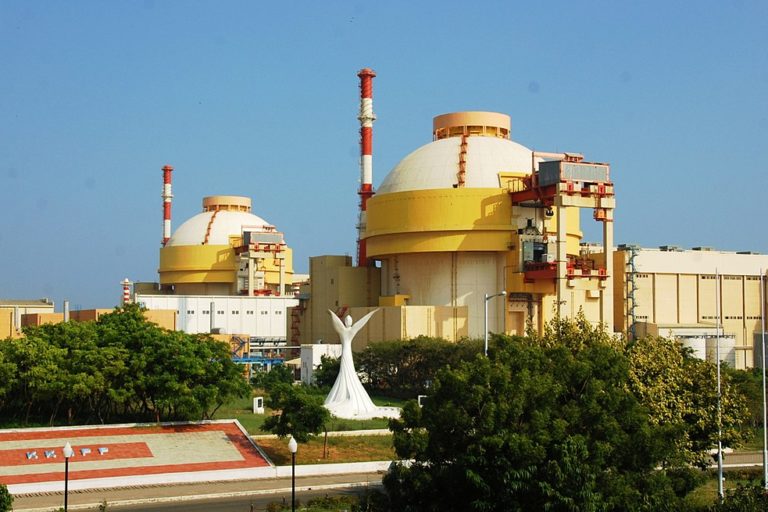 India’s nuclear power capacity is expected to be over 22,000 MW by 2031. An image of the Kudankulam nuclear power plant. Photo: Reetesh Chaurasia/Wikimedia Commons.

While granting environment clearance to the project in August 2019, MoEFCC had called for regular monitoring of radioactive pollutants in the environment and directed that soil and groundwater samples shall be tested to ascertain that there is no deterioration of groundwater quality by leaching of heavy metals and other toxic contaminants.

The ministry had also called for a periodic health survey of the population residing within 20 kilometres radius of the nuclear plant’s site and had stipulated that the expansion project takes off only after a positive report from the Tata Memorial College which recently conducted a study in a 30 km area around the plant to ascertain its impact on the health of people, if any.

Recently, an expert panel of the MoEFCC had recommended an in-principle approval to a Department of Atomic Energy (DAE) proposal for survey and exploration of uranium over 83 square kilometres in Telangana’s Amrabad Tiger Reserve.

According to the minutes of SC-NBWL’s meeting, the NTCA while recommending the project noted that the project site is adjacent to Kadra dam reservoir which is a part of Kali river estuarine system supporting a rich floral and faunal diversity.

It held that the “liquid effluents emanating from the proposed power station units should be treated for conforming to the standards prescribed by the central/state pollution control boards, International Commission for Radiological Protection (ICRP) and Atomic Energy Regulatory Board (AERB).”

NTCA stipulated that the temperature of water released into the reservoir should be the same as water temperature above the release site and an appropriate holding facility for cooling the water, if required, should be developed. It also emphasised that the radioactive waste generated from the project should be properly treated and that adequate protection is adopted “for transportation of radioactive fuel and wastes.” 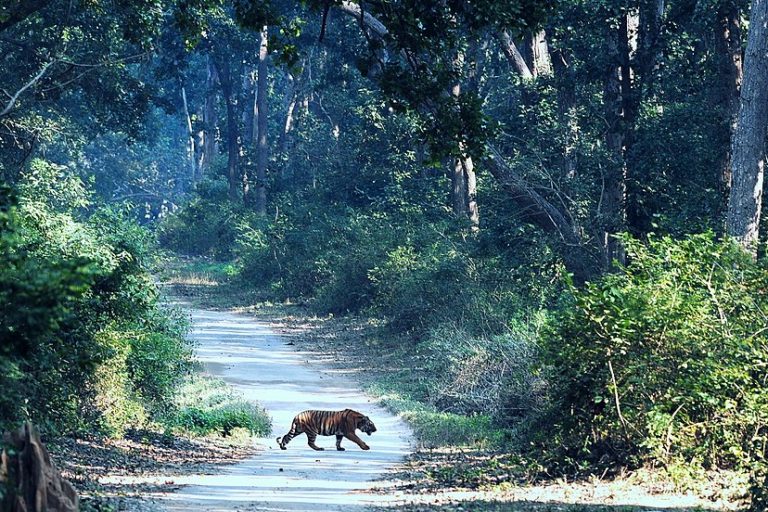 Over the past few years, several developmental projects in and around tiger reserves have received clearances from the government. Photo: Suriajay88/Wikimedia Commons.

Environmental researcher-activist Leo F. Saldanha told Mongabay-India that a matter of serious concern with the Kaiga project is the situation of the nearby Kali river.

“Several massive dams on the Kali river are being poorly managed. There is hardly any public information disseminated about the maintenance of these dams. Recently, the dams were too full and posed a serious risk of flash floods downstream.  There also is a serious question whether Kali has enough water to support Kaiga’s expansion as the river is already overdrawn for an upstream paper mill and other river diversion projects,” said Saldanha, who is also a trustee at the Environmental Support Group, an NGO that advances environmental justice.

“Cooling water is a critical demand at a nuclear power plant. But no one knows how much water the river actually has. Prior to approving the expansion, there has been no transparent appraisal to ascertain the impact of the nuclear plant on people and the environment, in particular wildlife. The manner in which the clearance for the expansion of the Kaiga’s nuclear plant has been rushed through reveals no one in MoEF, Forest Department or AERB cares about such serious concerns,” Saldanha added.

NTCA also sought “periodical environmental surveillance” funded by NPCIL covering all major parameters of air, water and noise pollution and radioactive emissions and their impact, if any, on surrounding biota by an independent agency.

It also called for levying of an annual environmental cess on NPCIL for conservation and management of wildlife as decided by Karnataka forest department. “This money should be deposited to Kali Tiger Reserve Foundation and should be used for village resettlement from Kali tiger reserve, wildlife habitat management and mitigation of conflict within the tiger reserve.”

In addition, the government has also accorded ‘in-principle’ approval for setting up five more nuclear power projects totalling a capacity of 31,948 MW.