"About a crore or two’s worth of minerals are extracted each day from around Sariska." On December 20, the National Green Tribunal (NGT) ordered all mining activities within 10 km of the Sariska Tiger Reserve stopped. They could restart only after having their mining leases cleared by a standing committee set up by the National Board of Wildlife.

The Sariska Tiger Reserve is located Alwar. It is a protected area that also has the ‘national park’ and ‘tiger reserve’ tags. It is situated in the Aravalli mountain range, over the dry deciduous forests of the Gujarat-Rajasthan-Madhya Pradesh ecoregion. The reserve is home, among others, to the Bengal tiger, hyena, jackal, sambar, chital, nilgai, the Indian peafowl, treepie, etc.

Also read: An Ode to the Spirit of a Tiger Scientist Who Fought the System

The area is also rich in mineral resources, and mining activities here endanger the local ecology.

“In the state of Rajasthan, mining is probably the second or third most important source of revenue,” according to G.V. Reddy, Rajasthan’s chief wildlife warden. He added that some mines were situated within 200 m of the reserve, and many of them also operate illegally.

Their impact has been well-documented. According to one 2014 study, some reasons the forest degraded include “unplanned mining of marble, limestone and dolomite at the periphery”.

Ghazala Shahabuddin, a senior scientist at the Centre for Ecology, Development and Research (CEDAR) said another major concern was habitat fragmentation.

“Deep mining such as for marble” requires that engineers constantly pump water “out from subsurface aquifers,” she said. “This can be fatal to … water bodies and streams in Sariska” because the “aquifers tend to be connected underground”. 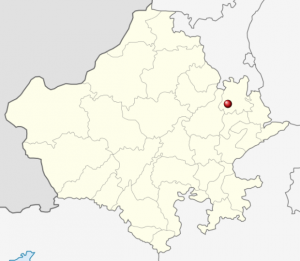 The location of Sariska Tiger Reserve inside Rajasthan. Credit: Wikipedia

The flora and fauna in the area are directly affected. The riparian vegetation in the area depends on perennial streams, and these water bodies also feed animals in what is a semi-arid dry forest.

“Perennial stream systems such as in Kanakwari, Algual and Pandupol support a distinct and diverse flora that thrives on high soil-moisture, including species of date palms, jamuns, gular and rohini trees,” Shahabuddin said. So “a mosaic of three or four forest types that support the high diversity of fauna and carnivore density are under threat.”

Mining activities also pose severe health and noise hazards to wildlife and humans. “There are many cases of silicosis in the Chittorgarh and Bhilwara areas because the fine dust particles easily settle in the lungs,” Reddy said. The same particles also contaminate open water bodies.

But for all these effects, the government has allowed mining to continue because it’s so profitable. “About a crore or two’s worth of minerals are extracted each day from around Sariska,” according to Reddy.

The NGT order drew from a Supreme Court verdict earlier this year. The latter was about declaring areas around 104 national parks and 558 wildlife sanctuaries in the country as eco-sensitive zones (ESZs). Of these, state authorities hadn’t drafted proposals for ESZs around 21 national parks or wildlife sanctuaries. So the apex court said that until the proposals were ready, their ESZs would extend up to 10 km from the parks’/sanctuaries’ boundaries.

Rajasthan’s proposal itself is currently pending before the environment ministry. Until it is cleared, the 10-km ESZ will stay for the Sariska Tiger Reserve.

Reddy said that the “exercise of notifying ESZs has been going on since 2014.” At the moment, according to him, the environment ministry has referred the ESZ proposal to the National Tiger Conservation Authority, a statutory body under the Wildlife Protection Act. “The long legal process could be blamed for the delay in notifying” Sariska’s ESZ.

The NGT declared that once the ministry issues a final notification vis-à-vis ESZs, mining activities within these zones would have to be cleared by a standing committee of the National Board of Wildlife.