Marine mammals have been studied by scientists in more detail than many fish found deeper in the ocean, and their acoustic behaviour has been a source of much fascination. 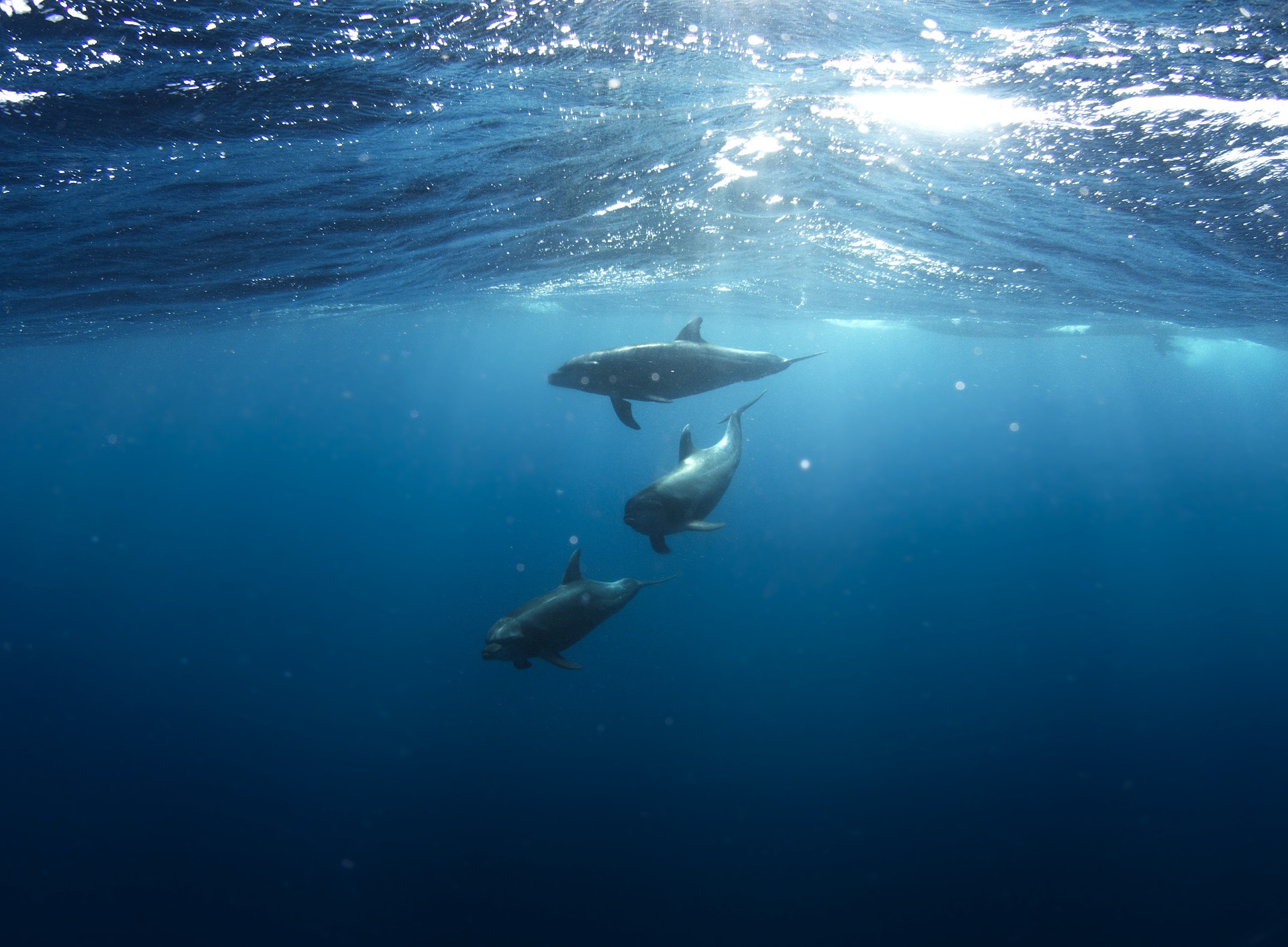 Sound plays such a vital role for marine mammals because it covers a range of functions essential for their survival. Credit: Free-Photos/pixabay

Sixteen whale carcasses washed up on India’s Konkan coast in 2015, followed by 20 in 2016. A 37-foot whale washed up dead on Mumbai’s Juhu beach in January 2016, drawing huge crowds. Its bones are set to be displayed later at the Marine Biodiversity Centre in Navi Mumbai. In the same month, over 120 short-finned pilot whales washed ashore in Thoothukudi, Tamil Nadu, and local fishermen worked to rescue as many as they could by towing them back into the water. Scientists from the Central Marine Fisheries Institute (CMFI) noticed injuries on the whales and assessed them to have been in a state of shock.

This is more than has been seen in the entire previous decade. Besides, scientists from the CMFI and the international community have reported sightings of whales in much shallower waters closer to the shoreline than their customary habitat in the open sea.

Stranded whales that lie gasping for breath on beaches or whale carcasses that wash up in numbers on shores bring home to us in very dramatic fashion that all is not well under the water. It is not their mortality but the scale and spectacle of such events that makes them uncommon and alerts us to the causes that could have led to them. The degradation of marine habitats due to destruction of underwater food sources and to invasive amounts of plastic waste has been discussed for many years now but what has received lesser attention is the effect of anthropogenic sound on the lives of marine mammals.

While a vast number of vertebrate and invertebrate forms of marine life, that includes fish, insects, molluscs and crustaceans are found in oceans, marine mammal species is a much smaller sub sect of approximately 129 species. They include dolphins, seals, whales, manatees, walruses and polar bears. Even these are not a distinct biological grouping. Cetaceans, comprising odontocetes (toothed whales) and mysticetes (baleen whales) are fully aquatic. Pinnipeds like seals and walruses are semi-aquatic, spending long periods of time in the water, but coming ashore to mate, moult and rear their young. A third category, like otters and polar bears, spends longer on land than in the water. Although they are few, marine mammal species have been studied by scientists in more detail than many fish found deeper in the ocean. And the acoustic behaviour of these mammals has been a source of much fascination.

A world of sounds

Songs of the Humpback Whale, a 35-minute long recording of the vocalisations of these whales, was released in 1970 and went on to sell over 30 million copies. Roger Payne, an American biologist, environmentalist and bioacoustician, had heard about incidental whale recordings in 1966. He had recorded the “eerie underwater moaning and wailing sounds” using a secret hydrophone off the coast of Bermuda and subsequently produced the album with his wife, Katharine Payne. He claimed that they were a life-changing experience. They captured the imagination of millions of human listeners, who understood for the first time how important sound was as a means of communication in marine species that had been imagined to be silent until then.

As it happens, sound has an entirely different dimension underwater than it does through the air, and this has been of interest to scientists who have been studying the effects of anthropogenic sounds on marine mammals. In a landmark study published in June 2007, Douglas Nowacek, Lesley Thorne, David Johnston and Peter Tyack wrote,

Among marine mammals, the cetaceans (whales and dolphins) utilise a wide band of acoustic frequencies. The massive blue whale Balaenoptera musculus produces low-frequency sounds down to ~15 Hz, and on the other end of the spectrum several species of porpoises (e.g. harbour porpoises – Phocoena phocoena) emit echolocation signals at 120–150 kHz. This broad range of frequencies intersects with many of the sounds humans introduce into the water, including ship noise, sonars of various types and seismic exploration signals. Some sounds produced by humans are well above the range used by marine mammals, e.g. high frequency echo sounders. … In the ocean, acoustic energy propagates efficiently, travelling fast and potentially over great distances. Sound travels almost five times faster through sea water than through air, and low frequencies can travel hundreds of kilometres with little loss in energy (Urick, 1983). Sound propagation can be affected by many factors… So, the sound arriving at an animal is subject to propagation conditions that can be quite complex, which can in turn significantly affect the characteristics of arriving sound energy. (Emphasis added.)

The structure of the ear in marine mammals is similar in several respects to land-dwelling mammals. However, there is a significant difference in how they receive sound. Pinnipeds like seals, walruses and polar bears have ears that are amphibious: they work equally efficiently in land and water. Compared to these, cetaceans that are fully aquatic – like whales – hear very well under the water but poorly over it. Both land-based and marine mammals have an outer ear and an inner ear, vocal cords, lungs and a larynx, the way they generate sounds and the acoustic range of such sounds varies greatly between the species. In addition to this, the hearing range of marine mammals is far greater than their vocalisation range. This is because they have to be vigilant about a much bigger variety of sounds from possible predators, even if the sounds they make to communicate with their fellow creatures are limited to a narrower span.

Sound plays such a vital role for marine mammals because it covers a range of functions essential for their survival. They use it in foraging for food, navigation by echolocation, communicating through clicks, whistles, moans and wails, and during breeding in calling for mates through recognisable sounds (like the songs of the humpback whales).

When human-made sounds interfere with marine mammals’ biosonar sounds, it’s called masking. Mothers and calves in the ocean often communicate through whistles, while clicks are two-way acoustic signals that are used as echolocation to detect prey or to escape predators. When anthropogenic sounds increase, they mask important biosonar signals. Fuether, higher levels of ambient noise can cause cetaceans to migrate away from their customary routes, with attendant problems of stress and deprivation from normal food sources. Even higher levels of sound can produce serious health problems for sound-dependent mammals, including internal bleeding and haemorrhaging. As a result, increased levels of anthropogenic sounds are of particular concern for marine researchers and conservationists.

Among the various sources of sound, naval sonar has been identified as having contributed to a bulk of marine mammal stranding. Naval sonars are spread over low, mid and high-frequency bands that directly fall in the hearing frequency range of multiple marine species. Such transmissions, within close range of these mammals, can cause them to become disoriented or suffer internal bleeding, and they could subsequently become stranded at nearby shores. Another major source of undersea sound is the oil and gas industry, which uses compressed air for seismic surveys and to identify undersea reserves. These surveys have been recorded as major source of noise pollution, leading to temporary or permanent migrations of species. The shipping industry also generates ubiquitous low-frequency noise in the ocean, reported to have been growing at three decibel per decade since the pre-industrial era due to increased marine traffic.

Closer home, the Indian Ocean region is emerging as an important area for the study of the effects of such anthropogenic sound and ways to contain their impacts. Arnab Das, a former commander in the Indian Navy and currently the director of the maritime research centre at the Indian Maritime Foundation, Pune, has articulated the need for an ‘underwater domain awareness’ (UDA). Das was a sonar engineer in the Navy who became interested in the subject of undersea sound and its effect on marine mammals when working on his PhD. He has said, “The acoustic habitat degradation is a complex issue specifically for formalizing a regulatory framework and requires significant Underwater Domain Awareness (UDA). UDA at its heart mandates high levels of acoustic capacity to monitor every situation in the undersea domain. It is our ability to know what is happening in the undersea realm of our maritime space for monitoring and initiating appropriate action.”

UDA has to be developed with the involvement and efforts of all the stakeholders involved: “the national security apparatus that takes care of maritime security and defence, the blue economy components of the maritime industry engaged in deriving wealth from the blue seas, the environmental regulators and disaster management authorities responsible for conservation and safety from the seas and the last one being science and technology providers that will aid in improving our access to the deep oceans.” Although the Indian Ocean Region (IOR) has attained strategic significance in the 21st century, this has also meant vulnerability from the seas and severe environmental degradation, with the blue economic thrust also likely to translate to far more degradation of the ocean environment. Das is sure that “India in its aspiration to be a global power cannot continue to ignore its maritime potential. Sustainable growth with a safe and secure maritime environment is possible only with effective UDA.”

“There is no reason to think that threats due to anthropogenic noise do not occur in the Indian Ocean,” Divya Panicker, a doctoral student studying marine mammal populations in southwest Indian waters at the University of Washington, Seattle, told The Wire. “Firstly, it is critical for us to understand the soundscape in India waters and what this means to marine mammals here. This knowledge is vital to design appropriate mitigation strategies. So we need to focus on developing rigorous scientific research in the area. A collaborative effort between scientists, governments and industry is absolutely essential and can go a long way in minimising disturbance in some situations. For example, in cases where sounds cannot be completely removed, agencies have modified the sound so that frequencies or amplitudes are different from that used by the animals, or before conducting operations, the area is checked for marine mammal presence.”

Conservationists who have long worked with species on land are also lending their voice to the need to increase our knowledge of habitat degradation in the ocean. Vivek Menon, the executive director of the Wildlife Trust of India, wrote in the August 2016 issue of Sanctuary Asia, “The most important thing I learned … was not that there was a problem. That was shocking, true. But the most important thing is that there is a solution. Noise-quietening devices are common among advanced nations. The US Navy funds the maximum research on this and other ocean noise related issues. Our navy and petroleum companies could use these devices, most certainly at a cost, to greatly reduce ocean noise.”