With Groundwater on the Decline, Marathwada Villages Turn to RO Plants

While villagers are happy they have access to affordable and safe drinking water, experts argue this could make the water shortage worse if not regulated. 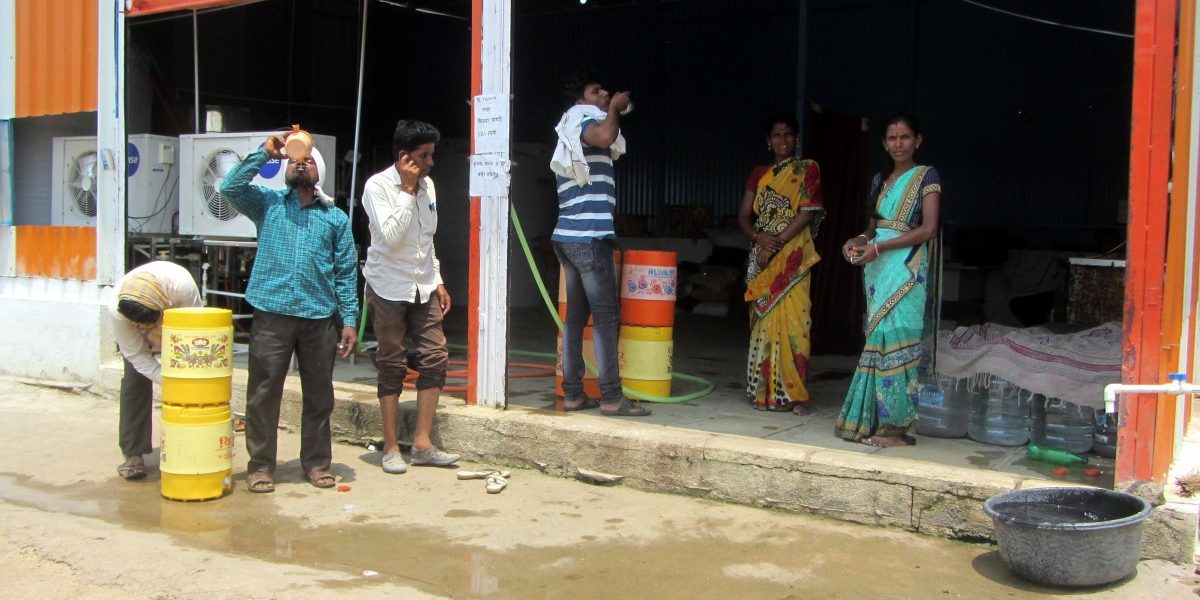 Nanded (Maharashtra): The river Manjra skirts Sagroli, a village 75 km from Nanded, on its southeast edge. It is mid-June and the sandy riverbed, almost 2 km wide, is completely dry.

Sagroli receives piped water from the Manjra, but the intake well doesn’t work. In fact, there are hardly any functional borewells and dug wells – yet nobody in the village seems to appreciate the precarity of the situation.

Part of the blame rests with a small-scale reverse osmosis (RO) plant that has been operating in the village since November last year, providing potable water at reasonable rates. Rajendra Mahajan runs the plant on his own land, using borewell water. He sells a can of 18 litres of cold water for Rs 25, and 20 litres of normal water for Rs 10. People from across four-five nearby villages rely on his supply. The RO wastewater from the plant, the reject water, is drained into the ground.

Sagroli isn’t the only village in Nanded district, or in the Marathwada region, to have its drinking water needs met by an RO plant.

Earlier, Sagroli residents drank water from dug wells and borewells, but soon both sources developed quality issues and led to health troubles. A Central Groundwater Board document lists districts where chemical levels in groundwater exceed norms set by the Bureau of Indian Standards. In Nanded, the amount of fluorides, nitrates and heavy metals raises red flags.

Overhead tanks supply piped drinking water to villages in the district, and the water is drawn largely from nearby borewells and/or dug wells. Now, a large number of these wells are dry. 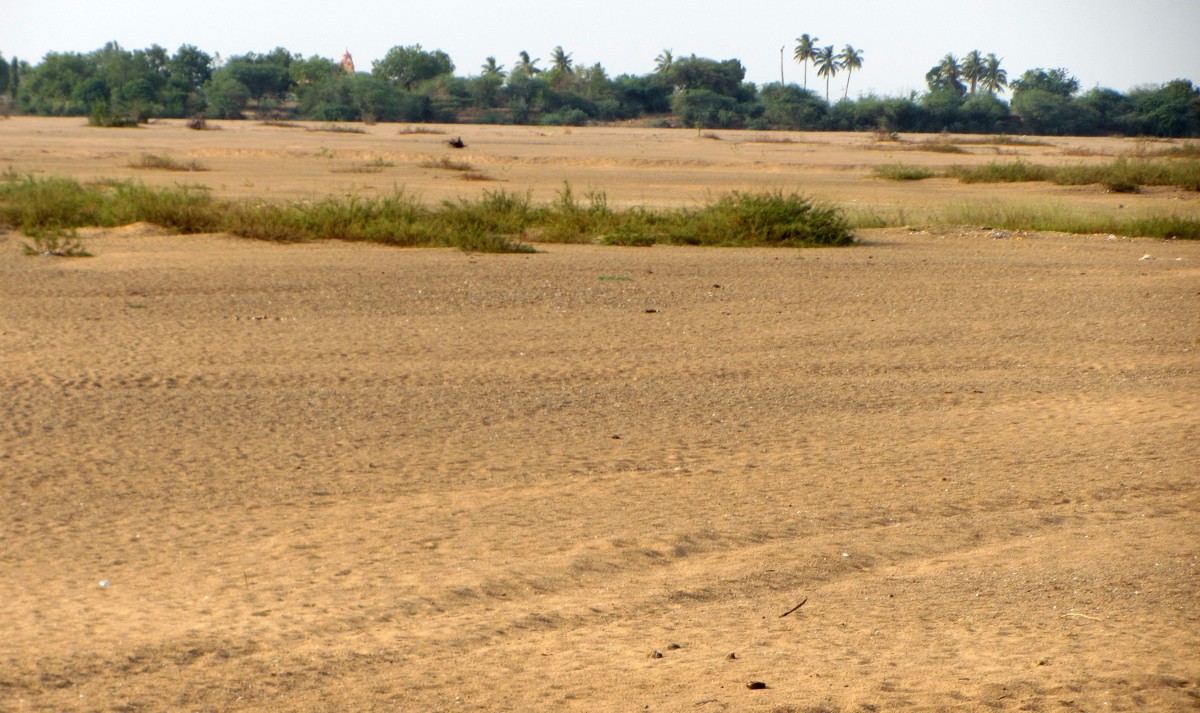 The empty riverbed of Manjra river, which supplies drinking water to Sagroli and other villages. Image: Nivedita Khandekar

Marathwada as a whole is reeling under severe drought; it has seen no rain since September 2018. There were no rabi crops in the 2018-19 season. Because of a delayed monsoon (it was only on and after June 25 that some parts of Marathwada saw rainfall), kharif 2019 sowing has been delayed.

“If we look at the last two decades of rainfall data (for Marathwada), we see that till about 2008, the rainfall was an average 700 mm (near normal). But since 2009, it has been erratic. And that was the time when Marathwada started experiencing drought,” says Vijeta Solanki, who headed the Groundwater Surveys and Development Agency in Nanded till May 31.

Given the precarious rainfall scenario, the Maharashtra government published the ‘Probable Drinking Water Scarcity Report’ in October 2018. As can be seen from the tables below, five of the state’s 16 talukas received deficit rains while seven showed groundwater level depletion (compared to groundwater levels averaged over the last five years in October).

Given the precarious rainfall scenario, the Maharashtra government published the ‘Probable Drinking Water Scarcity Report’ in October 2018. As can be seen from the tables below, five of the state’s 16 talukas received deficit rains while seven talukas showed groundwater level depletion.

While the rural landscape is marked by small-scale RO plants such as the one in Sagroli, there are some gram panchayat-run RO plants as well. One of them is in Katkalamba, a village of 500 households. To deal with water scarcity, Katkalamba embarked on a watershed management project in 2012. From 2014, substantial work has been carried out with village participation.

Two years ago, the groundwater level started to rise; a few dry dug wells came to life and some dead borewells showed signs of revival. The gram panchayat then decided to instal an RO plant for drinking water.

“Earlier, there were massive health issues. Fluoride was one of the major problems. Contaminated water often led to jaundice, dysentery and cholera,” said Gangadhar Mahadevrao Ekade, a villager elder. 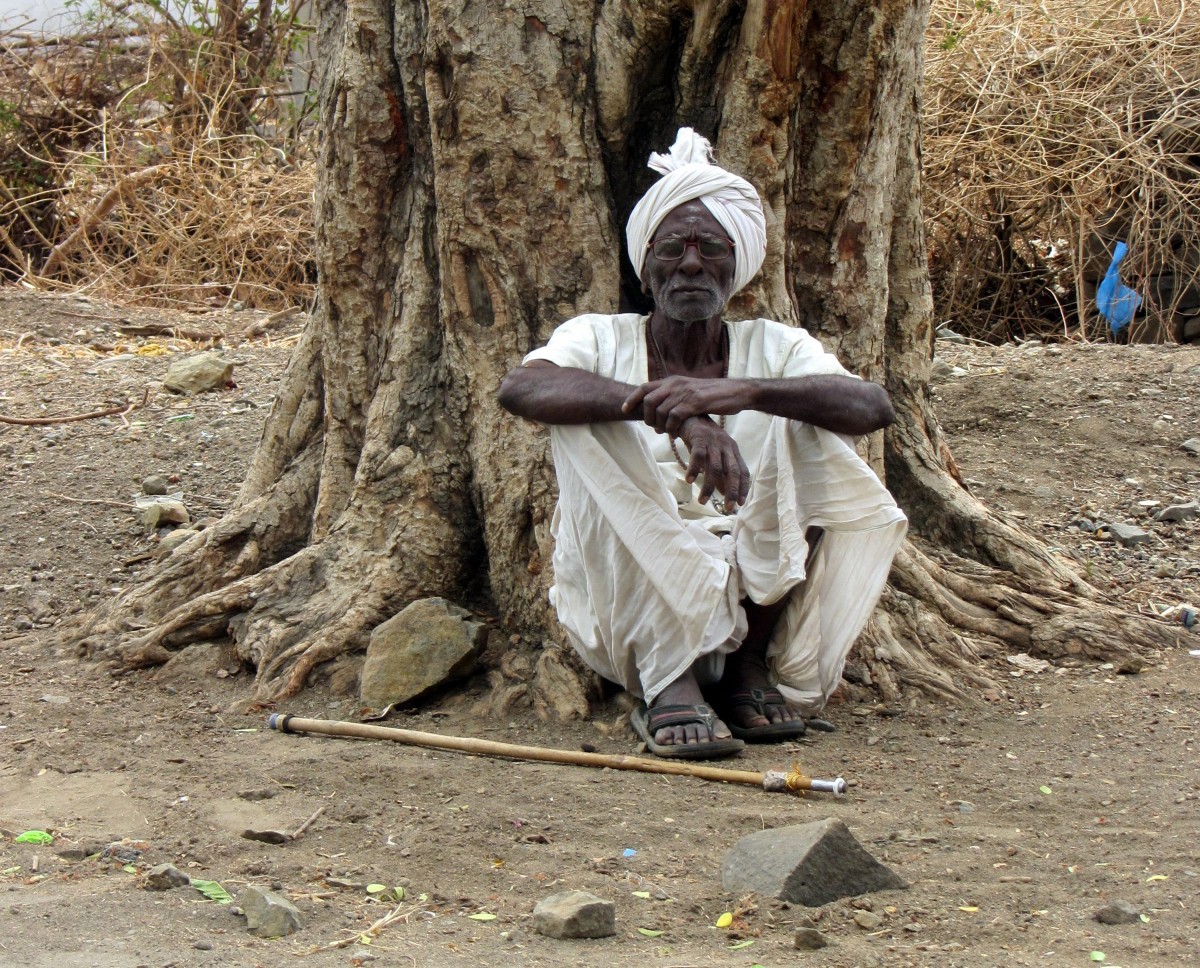 Gangadhar Mahadevrao Ekade is happy with the changes that contamination-free water brought to his village. Image: Nivedita Khandekar

There are two important benefits of this plant: it caters only to Katkalamba villagers, and reject water is accumulated in an old well next to the plant for non-drinking purposes.

Strong Groundwater Act, but only on paper

RO plants of this kind – both private and gram panchayat run – are on the rise across Marathwada because of the health benefits involved, and because the government has failed to provide safe drinking water. The continued use of groundwater has raised concerns about a depleting water table in the already parched, drought-prone region, but the government is yet to wake up to the need for regulation.

Maharashtra has one of India’s strongest Acts on groundwater. The Maharashtra Groundwater (Development and Management) Act 2009 categorically restricts any extraction of water in dark zones. Borewells up to only 60 metres are allowed. There are several other important provisions, but the state government notified the draft rules as late as August 2018, and is still seeking responses from the public.

“One of the most important clauses in the draft rules is six months jail for over-exploitation of water, as nobody can claim ownership of any of the water resources,” says Solanki. 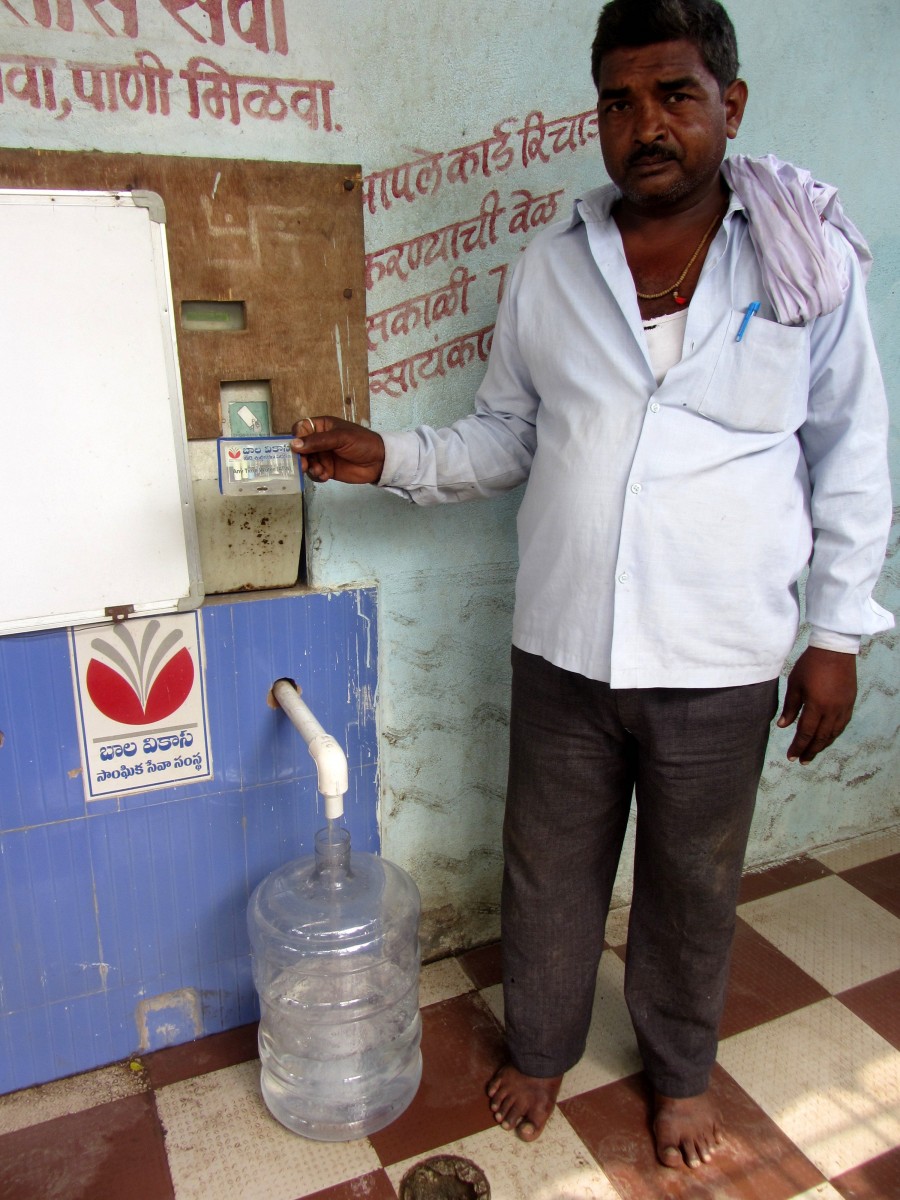 A villager shows his card at the counter to collect safe drinking water at the RO plant set up by the gram panchayat at Katkalamba. Image: Nivedita Khandekar

A sub-divisional magistrate can ban over-exploitation on anyone’s complaint. Armed with a large support staff on the ground, gram sevaks and agricultural assistants included, the onus is on the revenue department to keep violations in check when it comes to exploitation of groundwater for commercial purposes.

Vikram Rajput, a tehsildar in Biloli tehsil – where an RO plant is located – avoided taking any responsibility. He said the permissions for the bore-well are given by the local body so the job to keep track of violations is theirs too. “We will carry out a survey and inform the department concerned,” he added.

Surprisingly, the RO plants ‘only for drinking water’ have found a vocal supporter in Madhavrao Chitale, a former government of India secretary and expert on water issues. He says, “Out of the 150 litres per capita per day (lpcd) that is ideally the global average per day consumption of a human, drinking water is barely 5-6 litres. In order to avoid any future disease burden, we can afford this much groundwater being withdrawn and RO system used. this cost is good enough.”

But Neha Bhadbhade, research associate with Pune-based Society for Promoting Participative Ecosystem Management (SOPPECOM), said, “Even if we do not argue about the fact that villagers opt for RO water for quality, we can always question the institutional design for RO systems.”

In fact, while hearing a petition that claimed that the “indiscriminate usage of ROs was leading to a huge wastage of water”, the National Green Tribunal (NGT) on May 28 asked the government “to lay down a requirement for RO systems manufacturers that the recovery of treated water is at least 60 per cent and not more than 40 per cent should go as waste. Gradually, the recovery rate should be enhanced to 75 per cent.”

The association of RO system manufacturers had also admitted that recovery was not more than 20%, the report said.

SOPPECOM has been conducting a study since May 2019 across five districts of Marathwada to assess the impact of water conservation initiatives of the BJP government, since the announced it was ‘Making Maharashtra drought-free by 2019’.

Bhadbhade was critical of chief minister Devendra Fadnavis’s announcement on June 18 that “a financial provision of Rs 20,000 crore to Rs 25,000 crore will be made for the Marathwada water grid, under which water from dams and other reservoirs will be supplied through pipelines to all villages in the scarcity-hit region”.

“Devendra Fadnavis has shifted the goalpost one too many times. On its own admission, the government spent a whopping Rs 7,000 crore to create decentralised water storage structures for catching the rain where it falls. And after 4.5 years, he says we will go in for the Israel model of forming a water grid by linking all dams,” Bhadbhade said. “What we need is to understand, why did the groundwater quality suffer at all? That is because we have already dug deep, deep down.”

Using RO water, she argues, is not going to help in the long run. 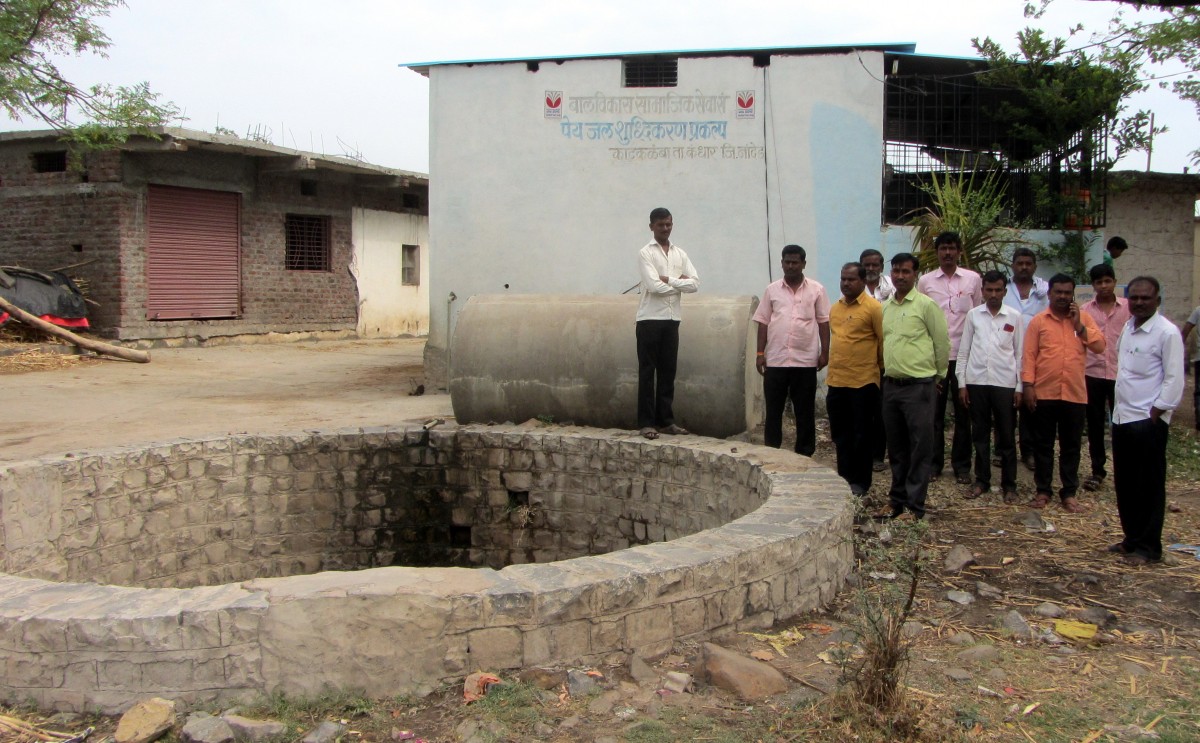 Villagers gather near the RO plant run by the gram panchayat at Katkalamba where the RO reject water is drained into a well. People use that water for non-drinking purposes. Image: Nivedita Khandekar

Rohit Deshmukh of the Sanskriti Samvardhan Mandal, Sagroli agrees. “All of these villages have water with high fluoride content, far more than is fit for human consumption. Today, the only solution seems to be to use ROs. But the long-term solution must be to increase groundwater availability. This can include watershed management works, rainwater harvesting at small and large scales, and other water conservation work to increase the groundwater level.”

“Any kind of treatment will be expensive. (Instead,) as and when the groundwater level increases, the fluoride content will be diluted,” he added.

Nivedita Khandekar is an independent journalist based in Delhi. She writes on environmental and developmental issues. She can be reached at nivedita_him@rediffmail.com or on Twitter at @nivedita_Him.