Can humans solve the lionfish invasion problem by eating them? The question leads us down a slippery slope of consequences we might not always be able to contain. 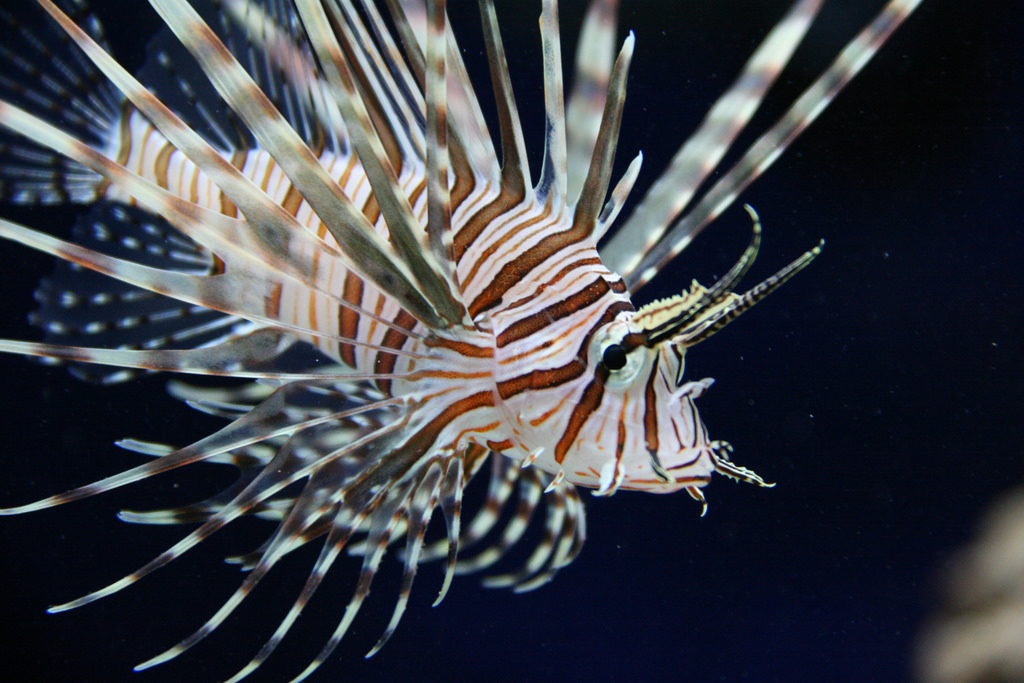 A lionfish. Credit: benpopik/Flickr, CC BY 2.0

The show invites aspiring entrepreneurs to present unique solutions to problems in front of a panel of potential investors (including billionaire Mark Cuban). On that day, Johnson and Groomes spoke about the lionfish, an invasive marine species originally from the Indian Ocean that eats pretty much everything but isn’t really eaten by anything thanks to its venomous spikes. The gentlemen were concerned about the lionfish’s proliferation in the mid-Atlantic Ocean, where it was displacing large populations of other commercially important species of fish, such as the grouper, in one of the “most rapid marine finfish invasions in history”.

Their solution was for humans to catch, cook and eat the lionfish.

All four investors on the panel rejected the idea because Johnson and Groomes hadn’t been able to evince sufficient interest from among American restaurateurs. As it happens, the Monterey Bay Aquarium’s Seafood Watch, an organisation that helps consumers “make ocean-friendly choices” when consuming seafood, released a report in October 2015 overwhelmingly recommending that the lionfish be eaten. The rating, in turn, led to a flurry of interest from chefs and kitchen-owners. Today, according to Sarah Shemkus in The Atlantic, there is sufficient demand for the creature for it to have become a mainstay in many menus. Mainstream success, it seems, is in the offing.

The solution isn’t as novel as it was presented to be on Shark Tank; humans have resorted to deploying intelligence – and gastronomy – in fending off troublesome proliferators often enough in the past for there to be a name for the practice: invasivorism. Some previous marine subjects include the northern snakefish, the Asian shore crab, crayfish and the watercress. In Andhra Pradesh in India, the pacu, a fish closely resembling the piranha, has been found to pose a dire threat while the suckerfish is up to something similar in Kerala. Some sites claim pacu ribs and suckerfish fillets are delicious.

This ecological architecture is contrived, establishing humans as a kind of omega predator and arguing that if an alpha starts to run out of control, humans will find a way to eat it. As Audubon magazine wrote in 2004, “We managed to dispatch all 5 billion passenger pigeons – many of them smoked, roasted, stewed, fried, or baked in potpies – in less than 100 years.” Worse yet, it also leads us down a slippery slope of consequences we might not always be able to contain. To begin with, eating invasive species hasn’t always worked. An example is a plant of Japanese origin called kudzu that invades a 100,000 acres every year on the American mainland even while finding mention in multiple cookbooks. This has an implication for the lionfish experiment as well. Even as long as there is only some, not widespread, demand, the lionfish problem in the Atlantic and the Gulf of Mexico won’t be solved. Instead, there has to be enough demand to ensure that the rate at which lionfish are killed breaches the additive mortality, and becomes able to affect the animal’s long-term population characteristics. Anything slower and we remain at par with the compensatory mortality – killing as many lionfish in a given period as would’ve died from natural causes anyway. This then draws our attention to another problem: there’s no way yet for us to kill lionfish en masse.

Traditionally, fisherfolk spear the lionfish after getting out of the way of its poisonous spikes but, as Shemkus reports, this is labour-intensive and further complicated by the absence of strong demand for its meat. In May 2014, Johnson (one of the gentlemen from Shark Tank) said he was working on a “smart trap” that would net only the lionfish, not anything else. An Angel listing describes the device as being solar-powered and using a trap triggered by an image-recognition software. It doesn’t appear to be in widespread use.

Both problems considered, ecologists think it’s still fine because invasivorism isn’t the entire solution but, by itself, serves the important purpose of creating awareness. Tom Kaye, affiliated with the Institute for Applied Ecology, Oregon, told PBS, “It’s really an awareness method to bring to the fore the fact that we have these invasive species. Because let’s face it: some of the impacts they’re having are pretty devastating and depressing.” Then again, there’s a downside here as well – if eradicating the lionfish from local ecosystems is driven by demand, and “in the unlikely scenario where this does work, this may trigger people to maintain an invasive population or introduce the species in other areas to get economic benefits”, as Martin Nuñez, an Argentinian ecologist, put it.

In a similar vein, consumers might choose to retain an originally invasive species for its cultural value as well. “Introduced wild boar are ecologically disastrous to the Hawaiian Islands, eating and rooting up endangered plants, causing massive erosion, and producing breeding pools for nonnative mosquitoes that carry malaria and pox that threaten the existence of several native bird species,” a group of American and Argentinian researchers have written. “Yet attempts to eradicate or even control populations of wild boar engender heated, heartfelt opposition from Hawaiians who have feasted on them for generations and view them as a valued part of their culture.”

India has its own share of problems due to invasive species. According to Kavita Gupta of the National Bureau of Plant Genetic Resources, 10% of floral species in India are invasive. A study published in 2001 estimated that floral, including crop, damages due to invasive pests in India amounted to $91.02 million (then Rs.425 crore) annually. Some longstanding mischief-makers include lantana, hyacinth, parthenium, ship rats, spiralling whiteflies and leafminers. Of them, the weeds Lantana camara and Parthenium hysterophorus have been particularly problematic. The latter prompted some scientists, together with the Project Directorate of Biological Control, Bengaluru, to import and introduce the beetle Zygogramma bicolorata in different parts of India from 1984 onward just to hamper its spread.

The problem also alerted scientists to the question of what makes an alien species invasive. After being introduced into a new habitat, a creature has to overcome multiple environmental barriers to establish its competitiveness – and if it turns out to have been more competitive than its fellow occupants, it turns invasive (which is what happened when the Impatiens glandulifera plant went from the Himalaya to Europe). At the same time, some species start invading habitats without meaning to as a result of adapting to a different problem. As Uma Shanker, of the University of Agricultural Sciences, Bengaluru, explained to Down To Earth in 2004, “Butterflies have a very high fidelity in moving from one flower type to the other. A butterfly visiting a red flower may not visit a yellow flower, but would only visit another red flower. Adapting to avoid this phenomenon, different lineages of lantana have evolved.”

Shanker goes on to blame the failure of many studies to predict invasions on their being blind to such interactions between different species. To become more perceptive of them, as well as to ensure the successes of future locavore programmes, scientists have asked for a combination of climatological tools to monitor ecological changes, access to a geocoded database of invasive species, and strong quarantine controls to prevent people from moving the species around. And as for species that have already turned invasive, such as the lionfish, for now, let’s chew on it.