The More Colourful Clothes Ludhiana Produces, the Darker its Waters Get

Ludhiana's Budda Dariya was once a clear stream of water, draining into the Satluj. Today, it is a toxic sludgeway, with a greasy patina flush with the stench of rotting eggs. A wide-angle view of the Budda Naala. Photo: Harnoor Singh

Ludhiana: Thanks to its garment and textile industry, Ludhiana is known as the ‘Manchester of the East’.

It manufactures over 80% of all woollen clothes in the country. Nearly a third of all industries in Punjab are based in Ludhiana. Of this, the garment and textile industry has the biggest slice of the pie. Units in Ludhiana make knitwear and hosiery out of cotton, polyester and acrylic – some of the principal fabrics used to make fast-fashion clothes.

Rahul Verma, a member of the Punjab Dyers’ Association and owner of Riddhi Associates, a garment-dyeing company in Ludhiana, is proud of what the industry has achieved here over the years.

“All Indian Premier League (IPL) cricket jerseys are made here,” Verma said. “The scale of what we do is so large that during the IPL season, jerseys are produced here day in and day out. Sometimes for a night match, the knitting and dyeing process starts early in the morning at full speed and we dispatch the items hours before the match starts.”

A big part of making clothes is dyeing. 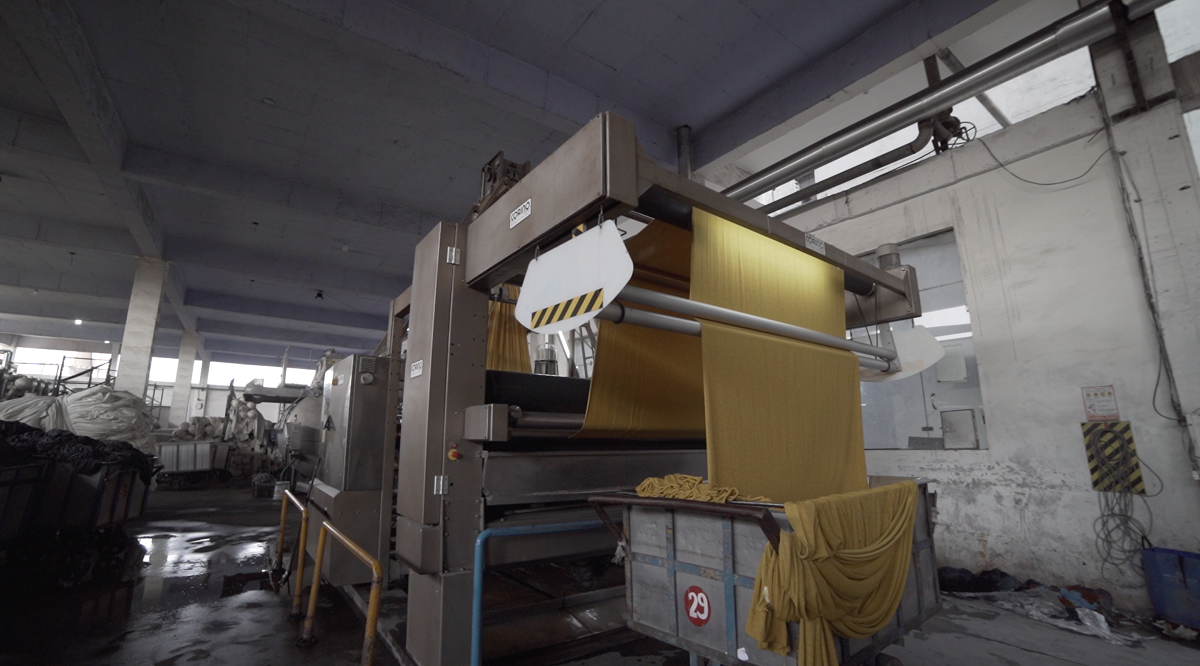 “Running a garment industry without dyeing is next to impossible,” Verma, whose firm is a leading dyeing enterprise in the city, said. “No one wears only plain white clothes all the time, do they? Consumers want choices and colour combinations, and we give that to them.”

It’s true that clothes need colours to sell. But in the last four decades, while resplendent fabrics have made Indians more fashionable, they have turned the textile town’s skyline smokey and its water streams dark.

Tajpur road, in Ludhiana, once ran beside a clear stream of water – the Budda Dariya, or ‘old river’ in Punjabi, which drains into one of the largest rivers in the region, the Satluj. But today, one of Ludhiana’s larger dyeing clusters has made it unrecognisable.

The river has become a toxic sludgeway, with a greasy layer on top, flush with the stench of rotting eggs. Sometimes, the rotting carcass of an animal dots the water. With its new look, it got a new name. It is no longer called the Budda Dariya; the locals call it the Budda Naala, or ‘old sewer’.

The cause of this plight is a complex mix of pollutants, although two stand out: industrial wastewater and domestic waste. 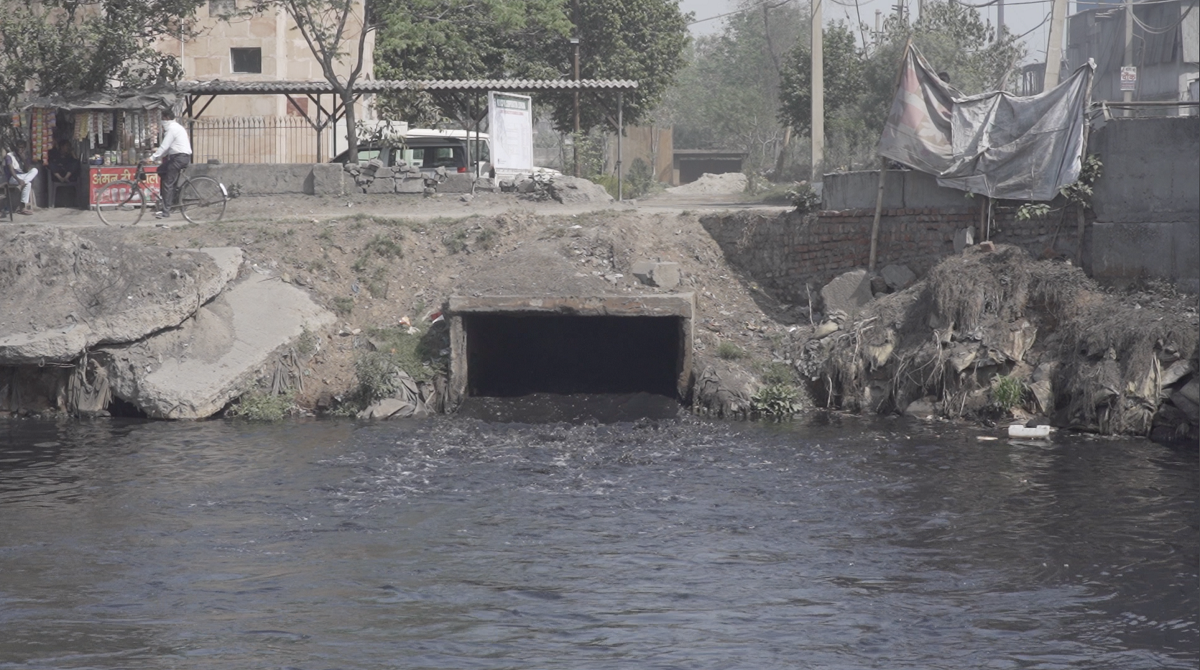 Sewage and domestic waste flow into the Budda Naala through a large opening. Photo: Harnoor Singh

To treat domestic waste, the Ludhiana municipality installed a sewage treatment plant here, but it stopped working almost a decade ago. Industries that set up shop in the area connected their sewer pipelines to it as well as allowed effluent wastewater to flow into a sewage treatment plant through the same pipes. And solid waste from nearby dairies clogged the pipes as well. Not surprisingly, the plant failed quickly.

So a large opening into the stream adjacent to the Tajpur dyeing cluster, which should have released treated domestic wastewater, vomits a mix of millions of litres of untreated domestic and industrial wastewater into the water stream every day. A mix-up of responsibilities

In the 1950s, an industrial boom hit Amritsar and Ludhiana, with little or no environmental regulations. Big water polluting factories didn’t need to have high-quality effluent treatment plants, called ETPs, and went with either low-quality plants or none at all.

According to latest data with the Punjab government, as of 2018, of the 1,505 water polluting small-scale industrial facilities in Punjab, 54 don’t have ETPs.

But the member secretary of the Punjab Pollution Control Board (PPCB) said these are only small units and that they don’t pollute much.

“See, small garment washing units or small electroplating units usually set up machinery at a cost of not more than Rs 2 lakh, and they start working. Whenever we find them, we close them down,” Karunesh Garg, member secretary of the PPCB, told The Wire. “This is not a serious issue.”

“We also have to see the sustainability of these small guys. We cannot expect them to set up a big effluent treatment plant. We will have to think about this and we will have to have some kind of policy on that,” he added. 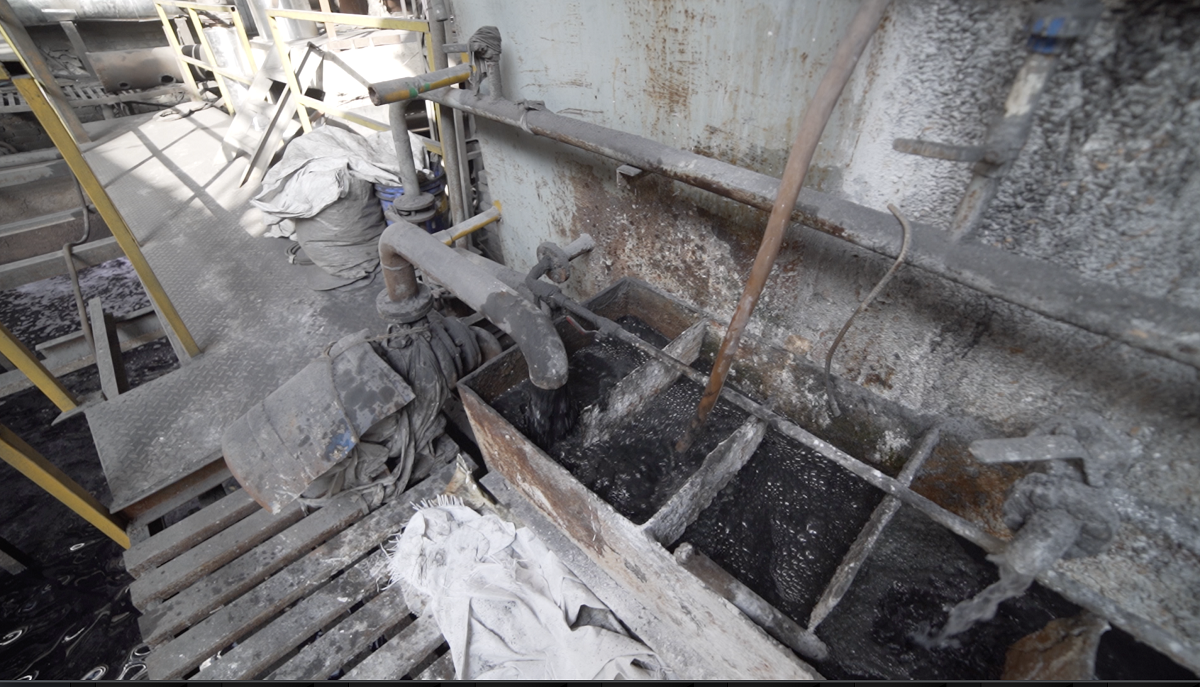 Waste water being released after the process of dyeing. Photo: Harnoor Singh

The PPCB is tasked with cleaning up industrial waste, and the Ludhiana municipality treats domestic waste. But when these two problems started flowing together, both government departments began blaming each other.

The callousness of the industrial units, the Ludhiana municipality’s sloppy management of the city’s domestic waste and PPCB’s ignorance are, taken together, as much to blame for the dirty water as the pollutants themselves.

Garg, of the PPCB, said the industries “tried to exploit the system” and didn’t install different pipes for sewage and industrial efflux, as required. “The municipal corporation shouldn’t have given the industries the connection in the first place,” he said.

The water stream in Ludhiana is foul. But even after observers have been able to identify specific pollutants, like certain heavy metals, the city administration doesn’t definitively know their sources. And civil society activists have said the absence of concrete information has benefited all stakeholders.

Jaskirat Singh is a citizen activist and a leading figure in spreading awareness of environmental causes in Ludhiana. He said successive governments in Punjab have been shying away from conducting studies. 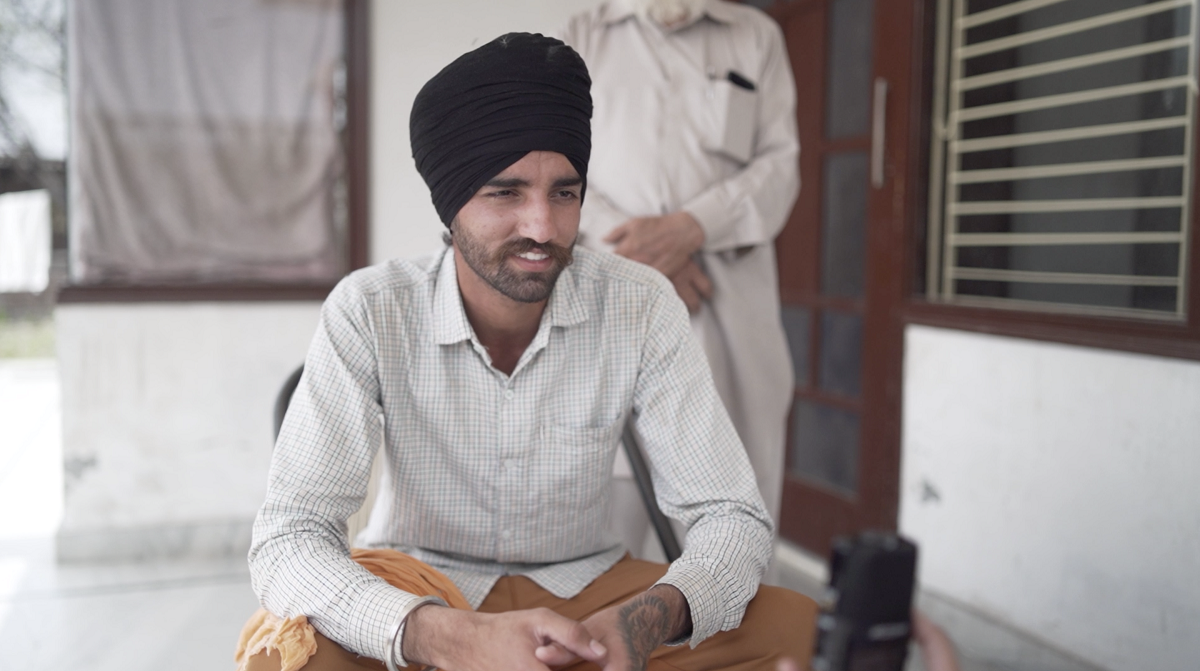 In a 2006 study, scientists from the  Punjab Agriculture University reported that Budda Naala also contained chromium, nickel, arsenic and lead, in the highest concentrations near the industrial town.

When asked about the cited studies above, member secretary of the PPCB, Karunesh Garg said that their department has worked over the years to bring the levels of heavy metals in the river to “permissible levels”.

“Yes, earlier there used to be heavy metals and toxins in the Naala. But around three to four years back, we have been successful in putting in place a common effluent treatment plant for the electroplating industry,” he said. “With this, we have been able to contain the presence of heavy metals. Now, we are not observing heavy metals beyond permissible limits,”  he added.

But the release of toxins into the water may already have caused irreversible damage in Punjab.

The Budda Naala cuts across a dozen villages in the region – the two prominent ones are Gaunspur and Manewal, and meets the Satluj a couple of kilometres away.

The stench of sewage is heavy in the air in these villages. People are convinced that the industries are the “real culprits” behind the polluted groundwater in their villages and a rise in diseases like cancer and hepatitis among the residents. They even believe that many industries discharge their wastewater directly into the ground.

“We try not to use our groundwater directly anymore, ” said Sarvjeet Kaur, a resident of Gaunspur. “We get water from government installed taps which supply water twice in the day. If this isn’t sufficient, we filter the groundwater and use it for consumption. We have installed water purifiers here,” she added. Baljeet Singh, another middle-aged resident, says he cannot afford water filters. He uses water directly from the government-installed taps. During summers, they have to use water judiciously.

“We don’t use groundwater anymore. See my teeth: they are all yellow. It is all because of these factories. We store our water. The water [from the government installed taps] runs for two hours in the morning and another two hours in the evening. We have to make do with whatever we store in that time,” he said. 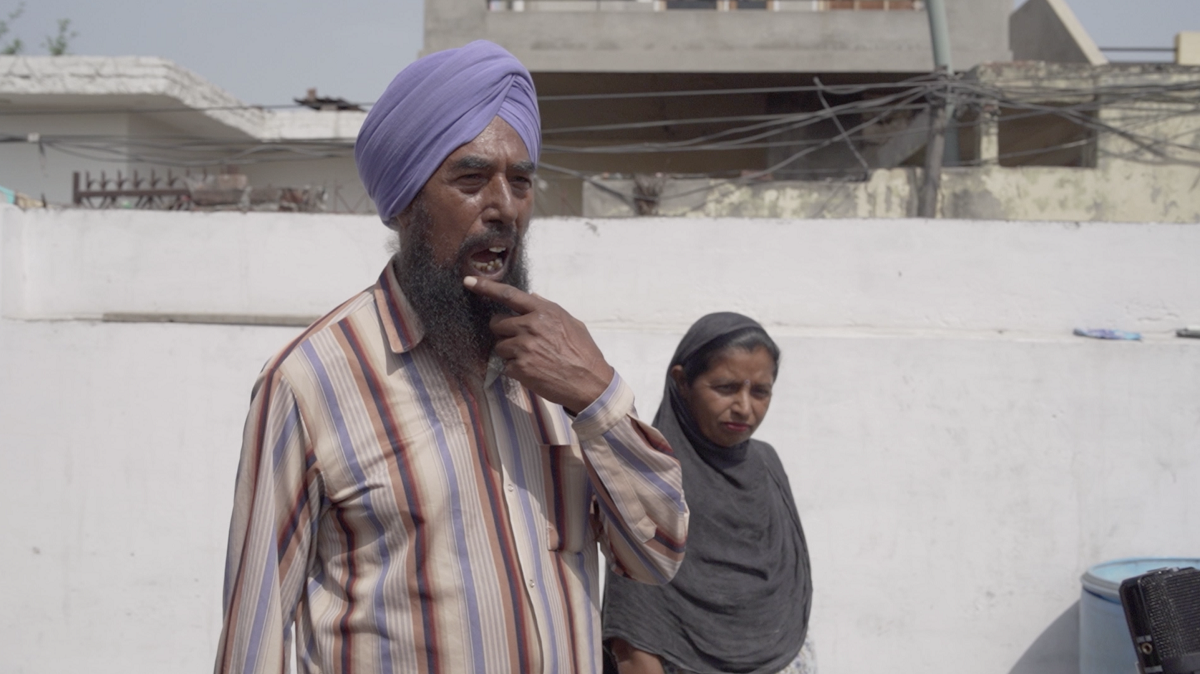 Twenty-three-year-old Jaspreet Singh, who is studying to be a soil expert at the Punjab Agricultural University, said that all the members of his family are calcium deficient.

“The doctor said that we’re not getting enough calcium, because of which my teeth were decaying quickly. So I got my cavities filled. It’s better now. Out of 100 people in my village, almost 80 people have dental problems, all because of the polluted water,” he said.

Activists also say that hazardous water pollution in the Satluj is also the cause of cancer in animals in Punjab. In 2010, in a reply to an RTI application that was filed by activist Gurpreet Chanbaja, the animal husbandry department admitted treating around 46 animals for cancer. But a few years later, in a follow-up RTI, the department completely denied sharing such information.

“The government is prepared to go to any lengths to hide the truth and facts. If they were seriously looking forward to dealing with the health crisis plaguing Punjab, they would have acted or conducted a study. Instead, they choose to hide the evidence,” he said.

At Manewal, The Wire saw the point at which the Buddha Naala joins the river Satluj – and the sight is shocking. The heavy, greasy sewage water does not merge with the river. It runs in a single separate stream, a river within a river. 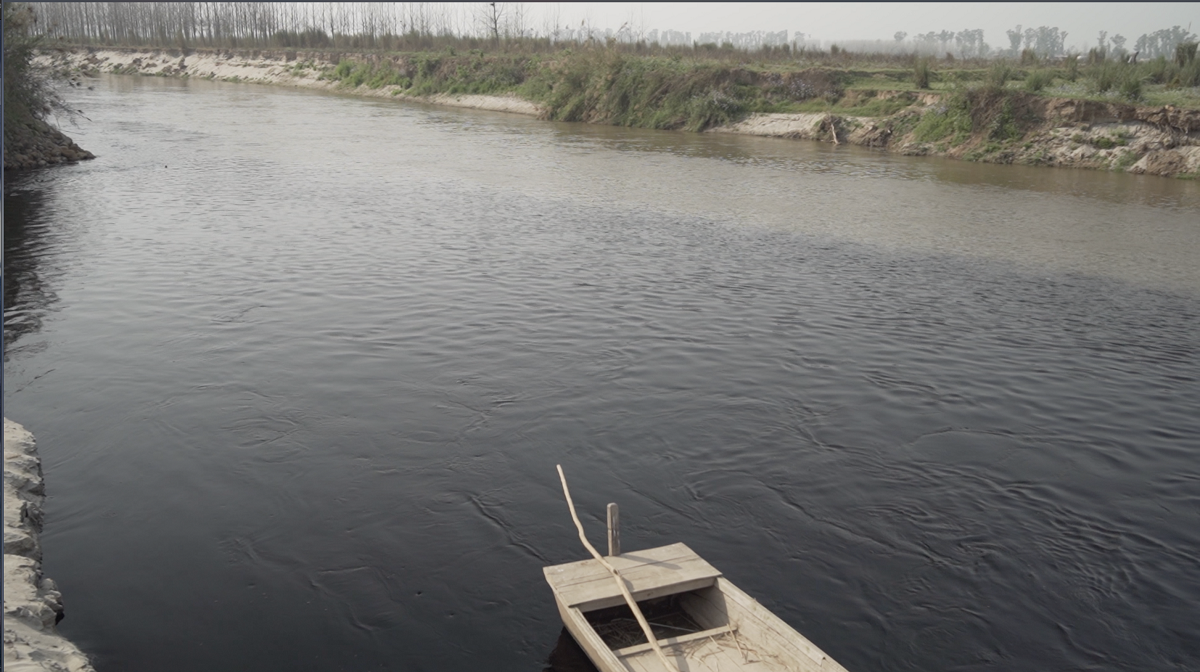 At the point where the Buddha Naala joins the river Satluj, the heavy, greasy sewage water does not merge with the river. Photo: Harnoor Singh

But back in Ludhiana city, the dyeing industry representative told The Wire that it’s ‘not only because of them’. He argues that wastewater from other industries flows into the Budda Naala stream too.

“The government department concerned must conduct a study to find out where heavy metals are coming from,” he added.

While citizen activists of Ludhiana believe that some factories treat their effluent, they refuse to believe that the wastewater discharged by the dyeing industry does not have any toxic substances.

Jaskirat Singh said, “The dyeing industry in Ludhiana is not a very advanced one. For every factory unit that is treating its effluent, there are many which do not. We believe that there is ammonia in their dyes. We can smell it in the water stream.”

The municipality and the PPCB, under the directions of the National Green Tribunal, are planning to go to the source – separate domestic and industrial waste.

A new and upgraded sewage treatment plant is replacing the defunct one at Jamalpur.

The industry and the government together are also installing two common effluent treatment plants (CETPs) at Tajpur, to process the wastewater from two dyeing clusters with small and medium (MSME) dyeing units. 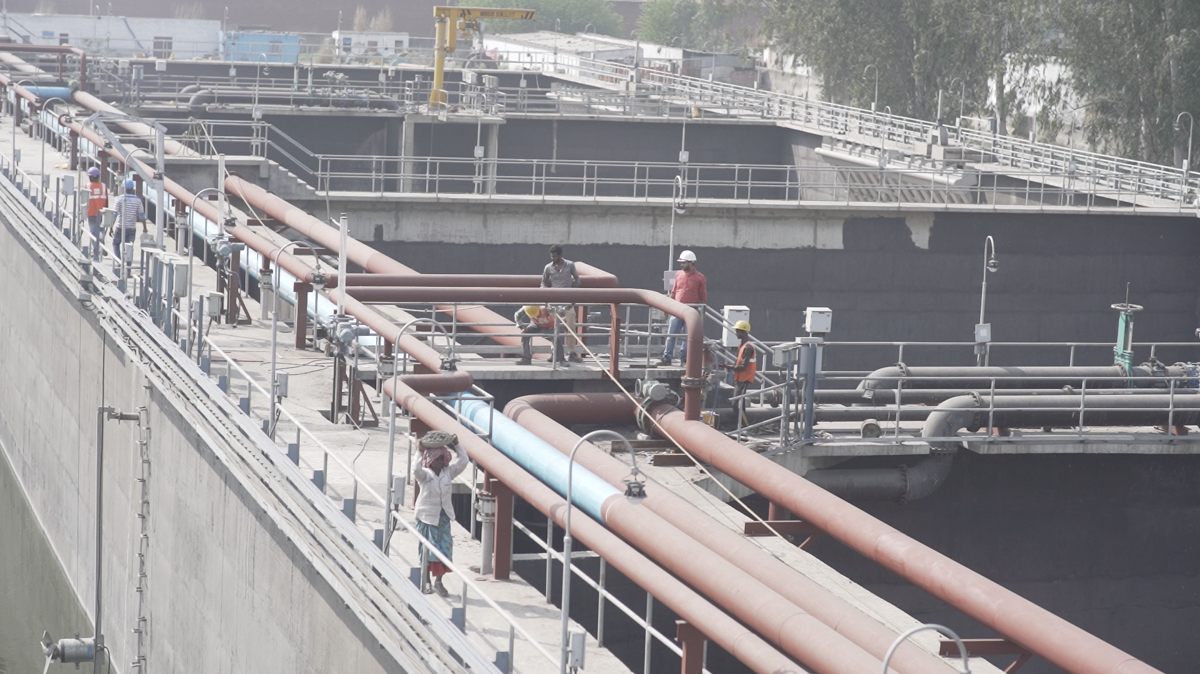 The new common effluent treatment plants plant being set up by the government and the Dyers Association at Tajpur. Photo: Harnoor Singh

Residents of Ludhiana hope that they will see the water running clean again. But they also know that a problem of this size isn’t going away any time soon.

This story is part of a three-part video series produced by The Wire in partnership with The ReFashion Hub. To watch a video of this story click here.

For a background on fast fashion, see here.