The Union agriculture ministry said that ground control operations were on in Rajasthan, Haryana and Uttar Pradesh. 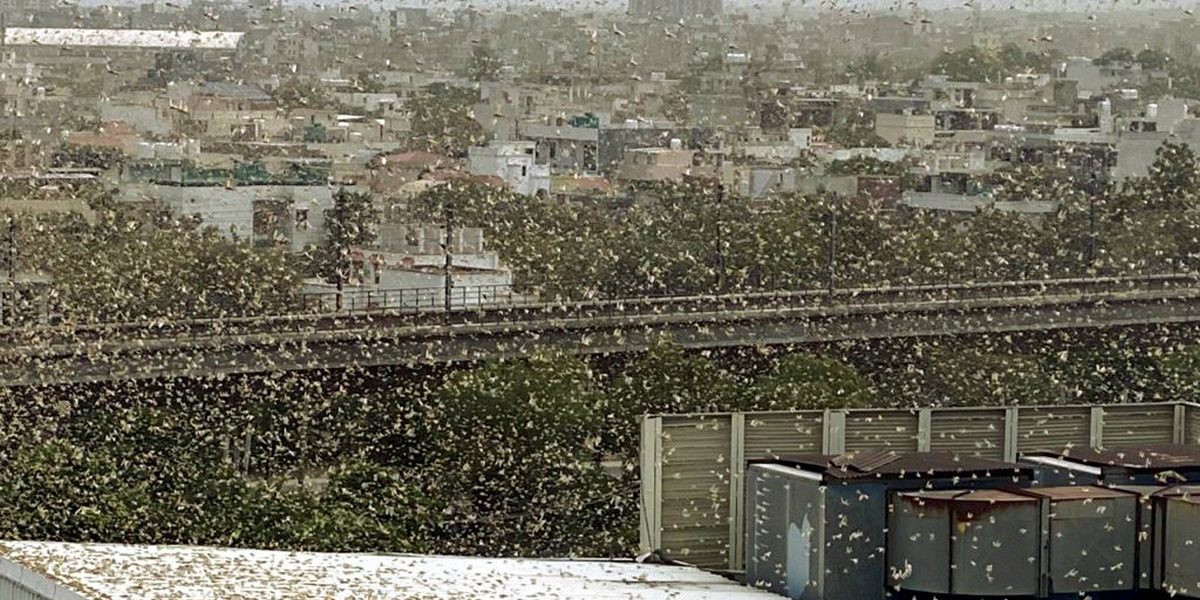 New Delhi/Gurgaon/Lucknow: Swarms of crop-destroying locusts entered Gurgaon in Haryana, border areas of the national capital and over half a dozen districts in Uttar Pradesh, prompting state authorities to sound an alert on Saturday, while the Centre said it has deputed more teams to assist in control operations.

The Air Traffic Control (ATC) in Delhi told pilots to remain alert as a locust swarm came near the airport area, officials said.

The locusts have been coming in waves into Rajasthan from Pakistan over the last one and a half months and devouring crops along their path as they cross from one state to another, though Delhi had not been affected till now.

The skies over many parts of Gurgaon turned dark at around noon as a swarm spread over several kilometres descended on the city from Rewari district where it had settled at night.

An advisory was issued by the district administration to all the residents on Friday asking them to keep their doors and windows closed as a precautionary measure. Yet, the invasion of the locusts, which settled on trees, rooftops and plants, left the people anxious and many shared videos taken from their high-rise perches.

The city government put all the districts on high alert and asked the district magistrates to coordinate with the fire department for spraying of pesticides and insecticides to prevent a possible attack of locusts.

An advisory issued by the Delhi development commissioner said that residents can distract the locusts by making high-decibel sound through beating of drums, utensils; playing high-volume music, bursting crackers, and burning neem leaves.

It asked the people to keep doors and windows closed and cover outdoor plants with plastic sheets.

The aviation regulator DGCA had on May 29 issued strict guidelines for stakeholders like pilots and engineers on how to deal with locust swarms, saying they pose a threat to aircraft in the critical landing and takeoff phase of a flight

Officials said as there was a change in wind direction, the locusts moved away from the region towards Uttar Pradesh and damage to crops was not reported from anywhere in Gurgaon.

A major swarm had come from Jhunjhunu, Rajasthan, and nearly one-third of its was destroyed in Rewari in Haryana on Friday evening through insecticide spray, after which three swarms were formed which have now entered Uttar Pradesh, officials said.

One of the swarms moved towards Gurgaon, and from there to Faridabad and onwards to Uttar Pradesh.

The locusts keep flying during day time and settle down only after dark in the evening.

“It was a huge swarm of five kilometre in length and two kilometre in width which passed through Mahendragarh and settled down in Rewari.

“Heavy insecticide spray was done during the night and early morning. About 35 per cent of the swarm was destroyed, but the rest which was still huge in number took off from there and crossed Jhajjar district and then went towards Gurgaon,” Haryana’s Additional Chief Secretary, Agriculture and Farmers Welfare Department, Sanjeev Kaushal said.

In Uttar Pradesh, locust swarms have invaded several districts in the past 48 hours and attacked trees and crops.

The UP Agriculture Department said reports of locust attacks were received from Hardoi, Jhansi, Chitrakoot, Allahabad, Pratapgarh, Bhadohi, Azamgarh and Ambedkar Nagar on Friday. It said authorities of the neighbouring districts – Hamirpur, Banda, Fatehpur, Kaushambi, Mirzapur, Sultanpur, Mau and Ballia – have been asked to remain alert.

Deoria District Magistrate Amit Kishor said a swarm spotted in the district has moved to Kushinagar.

Union Agriculture Ministry said that ground control operations were on in Rajasthan, Haryana and Uttar Pradesh.

“More control teams from Rajasthan have been moved to Haryana and UP to help in the locust control operations being carried out in these two states,” the ministry said in a statement.

All the groups of locust swarms are being tracked by teams of the State Agriculture Departments of Rajasthan, Haryana and Uttar Pradesh, local administrations and officials of the Central Locust Warning Organisation, and control operations are underway, the ministry added.

The Rajasthan government has written to the Centre to use helicopters to spray insecticides, the state Deputy Director of Agriculture Department, B.R. Kadwa, said.

“From last one-and-a-half months, there has been intermittent locust attacks in districts sharing border with Pakistan. Operations are on to control them. Older swarms have been killed but new swarms are entering Rajasthan,” he said.

The most affected districts in the desert state are Jodhpur, Jaisalmer, Barmer and Sriganganagar which share border with Pakistan.

With the onset of monsoon in the state, Jodhpur-based Locust Warning Organisation (LWO) has intensified preparation to control the population of locusts that are hovering in the desert areas between India and neighbouring Pakistan which are now a breeding ground for the pests.

In May, India battled a devastating desert locust outbreak. The crop-destroying swarms first attacked Rajasthan and then spread to Punjab, Gujarat, Maharashtra and Madhya Pradesh.

According to experts, broadly four species of locusts are found in India – desert locust, migratory locust, Bombay locust and tree locust. The desert locust is considered the most destructive.

It multiplies very rapidly and is capable of covering 150 kilometres in a day.

This insect, a type of a grasshopper, can eat more than its body weight. A one square kilometre of locust swarm containing around 40 million locusts can in a day eat as much food as 35,000 people.

Experts blame the growing menace of desert locusts on climate change. They say breeding of locusts is directly related to soil moisture and food availability.