Local residents have been campaigning for over a year to revive Delhi's Naini Lake. The AAP and BJP have finally signed a deal to restore the lake. 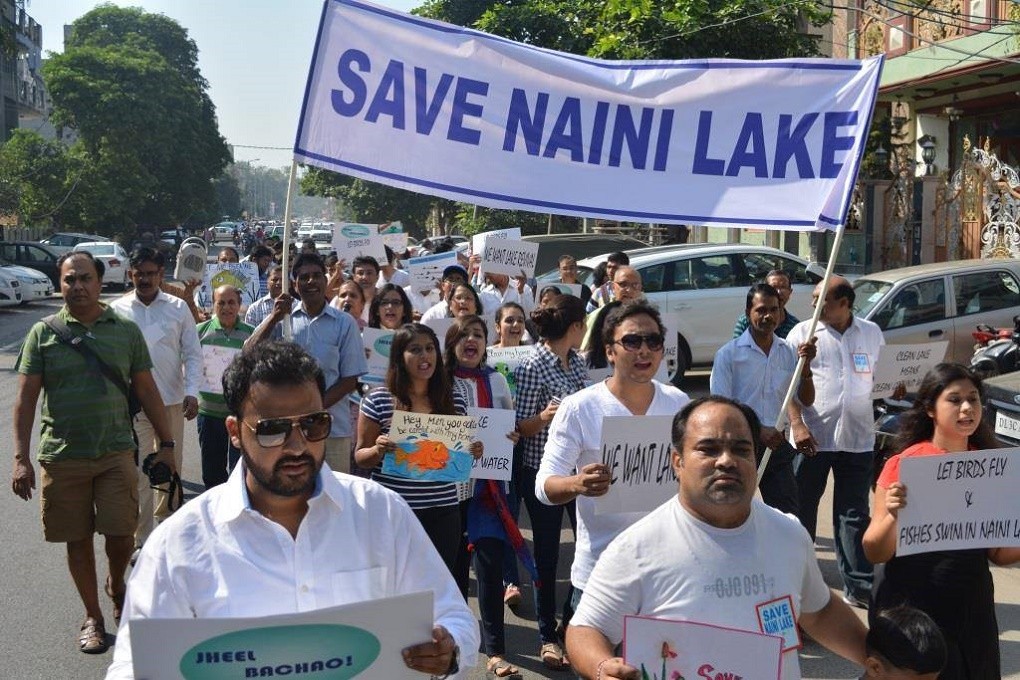 Delhi residents have been campaigning for over a year. Credit: Save Naini Lake Facebook/ www.thethirdpole.net

New Delhi: The Aam Aadmi Party (AAP), which governs Delhi, and the Bharatiya Janata Party (BJP), which rules the country, put aside their political differences to revive the Naini lake – a dying water body in north Delhi.

This is a big victory for the local residents who have put pressure on officials to revive the natural lake for almost a year. According to C.R. Babu, a world-renowned ecologist, the lake was “nearly ecologically dead” and needed rainwater to replenish it. Citizens who formed the ‘Save Naini Lake’ campaign were concerned about frequent fish deaths, the stench from the lake and the polluted water.

Since March 2015 campaigners have held protest marches, sent postcards and petitions, and urged the government to take up the issue as a priority. Unfortunately, despite official assurances and media coverage, the matter was stuck because a memorandum of understanding (MoU) between the North Delhi Municipal Corporation (NDMC), which is controlled by the BJP, and Delhi Tourism, which is under the AAP, had expired in 1993. There was an urgent need to renew the MoU so that the city corporation, which owns the lake, could grant maintenance and revival rights to Delhi Tourism without which the government did not have the legal rights to restore the lake.

At a high-level meeting that involved at least 30 officials from both the Delhi tourism department and the city government, including the mayor, Ravinder Gupta, and Kapil Mishra, Delhi’s minister for tourism and water, ecology prevailed over politics and the lake has received a fresh lease of life.

As the mayor and the minister signed the MoU amidst applause, Mishra said “it is historical” and clarified that the Delhi tourism ministry would only undertake tourism activities once the lake is revived. “We will restore the lake first and make this as the role model of other water bodies of the city,” he said.

The government has agreed to implement Babu’s plan to rejuvenate the lake without any engineering reinforcement or harm to the natural biodiversity of the Naini Lake. This will include building inlets for rainwater and encouraging new plant and fish species. While the BJP and the AAP have been at loggerheads with each other in Delhi, Gupta said, “This will be a joint effort of NDMC and Delhi Government. I agreed to take this up as this is for a good cause.”

Mishra also tweeted right after the meeting saying, “Major decision on Naini Lake done – Delhi Tourism will revive and conserve the lake. Amazing support from Mayor Ravindra Gupta for it.”

Delhi has lost 50% of its over 1,200 water bodies to rampant urbanisation, encroachments and pollution. Those remaining are either highly degraded or beyond restoration. It is becoming even more crucial to revive or conserve the existing water bodies such as Naini in order to recharge groundwater, control local temperatures and provide other environmental services.

The news has brought great joy and relief to residents. At the same time it has brought hope for the city’s remaining 600 wetlands. The campaigners are hoping for a speedy execution of the conservation plan now.

This article was original published on The Third Pole. Read the original article.